Data Study to Predict Storms in 1794

Contributed by Michael Winfield. Michael is currently in the NYC Data Science Academy 12-week full time Data Science Bootcamp program taking place between April 11th to July 1st, 2016. This post is based on his second class project – building a Shiny App in R.

The CLIWOC Dataset: Weather and Location Measurements from 1750-1850

The CLIWOC Dataset consists of 18th-19th century ship logs from European ships traveling around the world. Those ship logs – of course, organized by date – contain longitude and latitude measurements for a particular ship on a given date with corresponding temperature measurements and weather conditions. The dataset entries are in multiple languages and there is a fair amount of corruption (missing data), particularly in earlier years in the century’s worth of data.

With respect to missing positional data, I tried both random and mean imputation, but, as one can imagine, the random imputation created ship positions on land masses and the mean imputation clustered values in the most traveled ship lanes, thus obscuring the actual patterns in the dataset! I again opted for omitting corrupted observations, as this left me with over 50,000 observations, and the missing data was missing completely at random.

After dealing with the missing data issues, I took a step back and thought about my goal for my second project. For my second project, I wanted to create an interactive way of visualizing the location of occurrences of rain, storms, and fog. Looking at the dataset, I wondered: What is the most user friendly way to conceptualize ancient century ship logs recording position (longitude and latitude) and related records of weather and temperature? My first idea was to code an interactive map.

An interactive map, I reasoned, would: 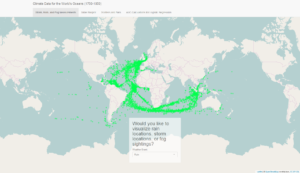 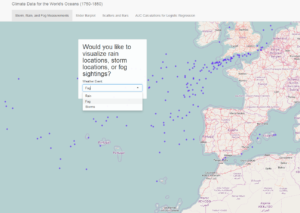 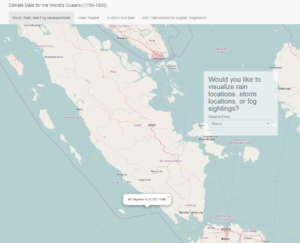 Beyond building that interactive feature, I also wanted to investigate temperature measurements in the dataset with greater focus. The questions I had were: 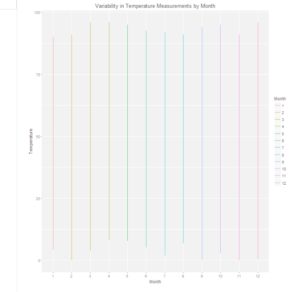 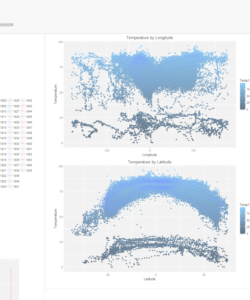 The highest temperature observations cluster around the 0 in Latitude (the Equator) and 0, 50, and 100 for Longitude (all of which bisect population dense areas – North America, South America, Africa, and Europe). 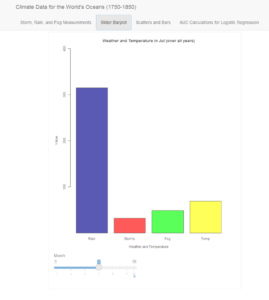 To answer this question, I built an animated slider barplot that plots average temperature readings in a given month over every year in 1750-1850 against the total occurrences of rain, storms, and fog in that month over all years. Through a quick 30-second animation, this portion of the app visually demonstrates that across a century’s worth of data, the amount of rain, fog, and storms varies on a month-to-month basis greatly, but average temperatures from month-to-month do not. The weather condition that varies the most on a monthly basis is rain.

Lastly, I wanted to test out logistic regressions for rain, storms, and fog to see if I could predict the occurrence of a given type of weather event based on this ancient dataset. I used David Roberts’ method of calculating the AUC in R, via use of the ROCR library.

Above is the code for the logistic regressions I conducted for the occurrence of a storm, rain, and fog, and below are their respective AUC calculations, all of which are above .5, meaning my models perform better than randomness (or a coin toss). 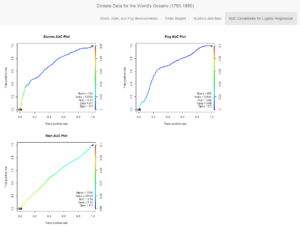