According to the data from US Department of Health and Human Services (HHS), in the 1990s pharmaceutical companies declared prescription opioid pain relievers safe and effective to use, thus healthcare providers began prescribing them at higher rates. However, the rate of prescription overdose deaths has been steadily rising since then, in 2017 the rate of overdose deaths was six times that of 1999, and the HHS declared the opioid overdose epidemic a national public health emergency. Every day, over 130 people in the US die from an opioid overdose.

In July 2019, the Washington Post released a pain pills database obtained from the US Drug Enforcement Agency, containing hydrocodone (brand name: Vicodin) and oxycodone (brand names: Oxycontin, Xtampza ER, Oxaydo, Roxicodone) transactions from 2006 to 2012, and updated it in January 2020 with data from 2013 and 2014. I took the data from NYC and created an R Shiny web app to visualize the purchases in each zip code region in each year. Here are the results.

The dataset shows oxycodone and hydrocodone purchases from pharmacies or other healthcare providers from pharmaceutical companies from 2006 to 2014. Each transaction contains the name of the pharmacy, the date, the location of the pharmacy, the name of the drug, the number of pills (if applicable), the dosage strength of the drug, and the total grams of drug. Oxycodone is the most popular prescription pain killer to be abused, with hydrocodone coming in second.

One can see some obvious caveats to this dataset: there are many prescription opioids, not just oxycodone and hydrocodone . According to the  National Institute on Drug Abuse, there's also a considerable amount of illicit (and therefore unprescribed) drug use, including illicitly synthesized fentanyl and heroin. Of people who misuse prescription opioids, 4 to 6 percent transition to heroin.

Another limitation is that the dataset is only from the years 2006-2014, and no earlier years or later years. For earlier years, this may be due to limitations in the DEA's records, and for later years this may be a privacy concern. Also obviously (because of HIPAA) there is no information on patients, just on the pharmacies and healthcare providers, but this also limits any demographical information to be obtained on the patients, or even information on how the pills are allotted to patients.

All of New York over the years

There are many ways of considering the amount of drugs being purchased. Since there is no direct patient information, I cannot explicitly calculate any "per patient" average, whether it be MME or number of pills. However, below are some plots of overall pain pill consumption in NYC for hydrocodone and oxycodone between 2006 and 2014. One can see that while the number of pills and transactions (left two plots) for hydrocodone was greater than for oxycodone in 2006, the oxycodone values have increased steadily through 2011, passing hydrocodone in 2008.

Meanwhile, the numbers of hydrocodone transactions and pills peaked in 2007, and have been decreasing since. The MME, which measures the overall amount of drug (the total number of grams of the drug multiplied by its MME conversion) shows a similar trend, with oxycodone increasing while hydrocodone decreases. However, the MME of hydrocodone was never greater than that of oxycodone - probably because the oxycodone is stronger.

Why is there this rise in oxycodone popularity, and fall in hydrocodone popularity? According to healthline, hydrocodone is more likely to make a patient constipated, and oxycodone shows a greater effectiveness when paired with acetaminophen. However, as reported by the LA Times, New Yorker, and NY Times, there appears to be a considerable amount of manipulation of the pharmaceutical market by pharmaceutical companies like Purdue Pharma.

Amount of Pills Sold from the Most Popular Pharmaceutical

Both companies have been implicated in lawsuits regarding opioid addiction. To the right are plots of the leading pharmacies purchasing these drugs. Kinray cuts off in 2011 because it was bought by Cardinal Health, which also explains why Kinray was most popular until 2011, when  Cardinal Health became most popular.

The overall trend shows an increase in oxycodone use, peaking in 2012. In the app, one can also look at data by year. Here I show 2012. 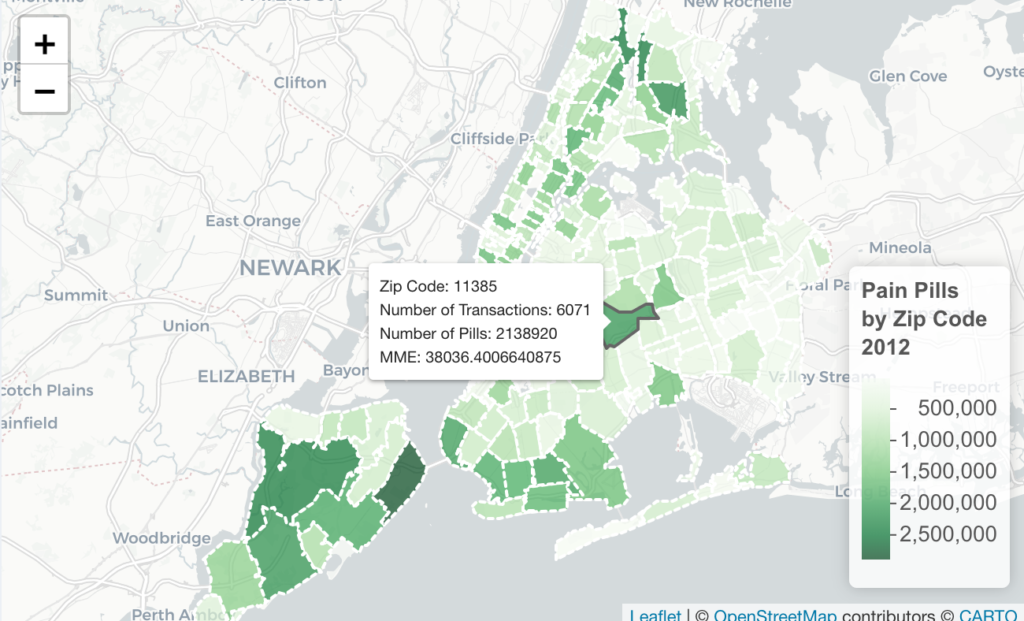 Hovering the mouse over a zip code region reveals the pop-up label with the zip code, number of transactions, number of pills, and MME for that zip code in that year. One can see that Staten Island has some darker green zip codes, indicating higher numbers of pain pills sold in those regions. In addition to the mapped data, one can also view histograms of some of the data per zip code. The MME histogram is skewed right, with mostzip codes hovering with less than 20,000 MME in 2012, but then there are only three with MME greater than 40,000. The number of transactions per zip code is less skewed to the right. 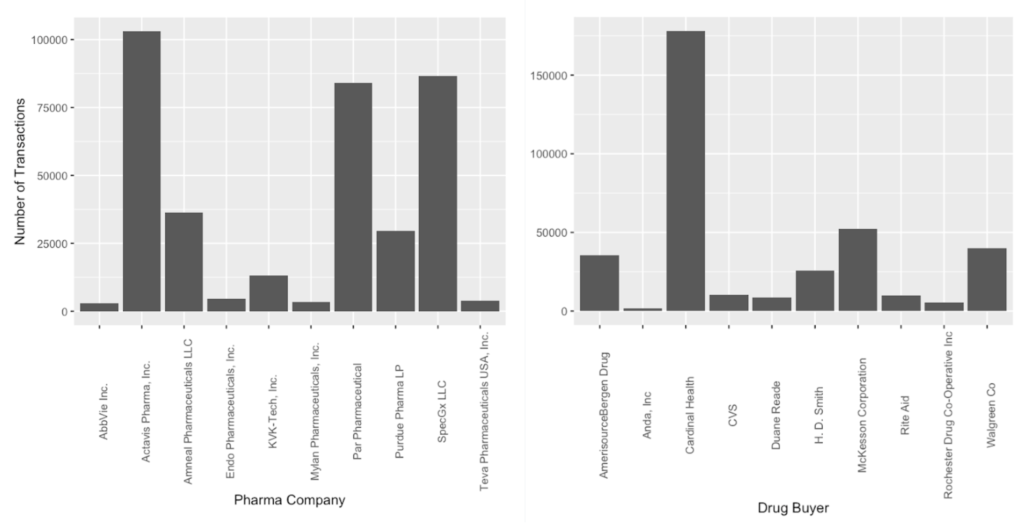 This app is design to allow for examining how much of these opioids are bought, by whom, and from where, in hopes of tracking how the opioid epidemic has moved throughout the city. One can see the role of major pharmaceutical companies like Actavis Pharmaceuticals and Purdue Pharma, and also the rise in oxycodone use.

The app can be found here.

Code can be found here.

A physical chemist by training, my Ph.D. involved analyzing 100+ Tb datasets using Python. I fell in love with the world of data and chose to pursue data science by getting certified with the NYC Data Science Academy,...
View all posts by Jennifer Ruddock >