You Voted for Whom? My R Shiny App on the Demographics of Party Misalignment in the 2016 Election.

In this post I introduce my first interactive R Shiny app investigating demographic differences in the 2016 general election results.

Given concurrent Congressional and Presidential races in the 2016 election, I can segment out districts into 4 groups based on the party of the winner in each race. I then study demographic features of each group to understand what is differentiating districts that voted along party lines versus those that were split between parties - districts that will be heavily contested in the 2018 midterms. 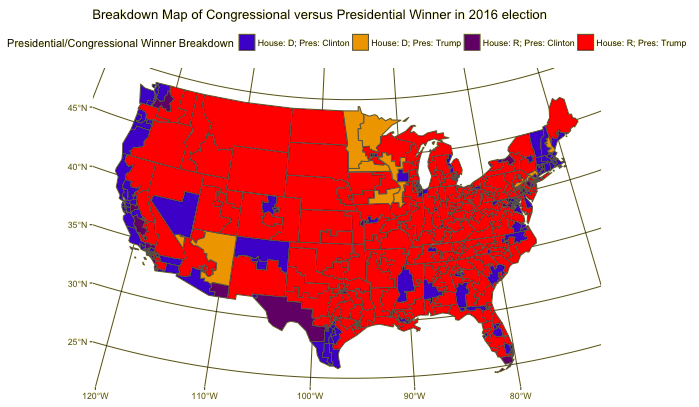 See my code on github here.

Political parties are amorphous and during a Presidential election, varies ideologies compete in primaries to represent each party in the general election. While the parties then unify around the primary winner, that candidate will not substantially represent a portion of their party's supporters.

Sometimes that discrepancy between voters' ideal candidates and the party's choice of candidate is so large that they are persuaded to vote instead for the opposing party's chosen candidate and are thus disloyal to their identified party.

The 2016 Presidential election delivered highly oppositional races within both the Republican and Democratic primaries and the general election. Virtually no one saw Donald Trump's hostile takeover of the Republican Party or believed Hilary Clinton would face a tough primary against Bernie Sanders. Therefore many voters who felt loyal to their local party's Congressional candidate felt 'misaligned' to their party's Presidential candidate.

This party misalignment occurred in 35 of the country's 435 districts, and the party of the majority winning presidential candidate differed from the party of the elected Congressional representative. 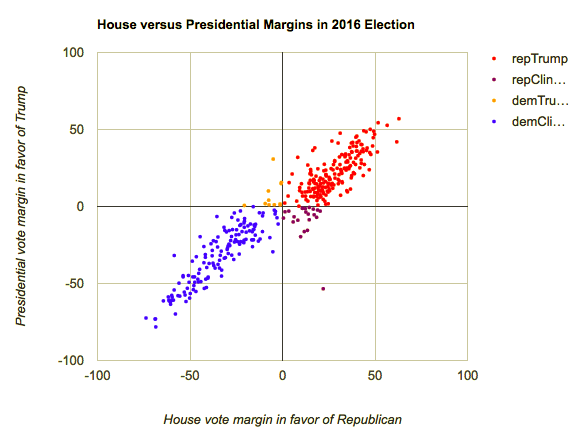 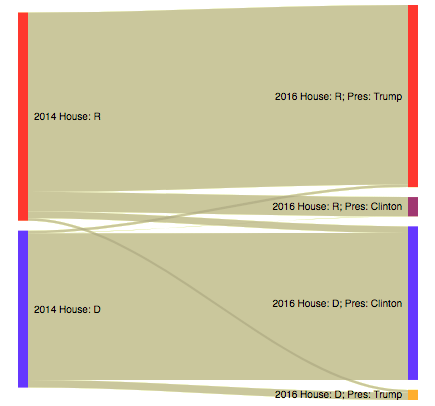 The ACS data displays the % of the population of each district at each level of the variables included.

For each variable, I provide a visualization of the mean and variance breakdown across party misidentification. To experience the full interactivity of the graphics, check out my R Shiny app.

Data used for this analysis comes from three sources:

Mean breakdown of education level across all districts in voting group:

Distribution for each education level (interactive choice in R shiny):

Mean breakdown of racial/ethnic identification for each factor of party alignment.

Distribution for each racial/ethnic group (interactive choice in R shiny) :

The misaligned districts' demographics prefered Presidential candidates 'lost' their party's primary. Based on these results, one can imagine a very different result had the Republican candidate been Marco Rubio and the Democrat been Bernie Sanders.

While Trump's forceful ideology was not expected in 2016, he now holds significant sway over the Republican party looking toward to the upcoming 2018 Congressional midterm election. These  'misaligned' districts will be battleground targets for Congressional candidates of the opposing parties. Whether or not these candidates are successful will indicate just how successful the extent to which the national party schema has been 'Trumpified'.

Build upon theory on Misalignment

Analyze over time relationship between demographic variables and political outcomes