Contributed by William Aiken. William took NYC Data Science Academy 12 week full time Data Science Bootcamp program between Sept 23 to Dec 18, 2015. The post was based on his second class project(due at 4th week of the program).

This was my first data science project associated with the bootcamp.  The goal of this project was a visualization and explorations of New York state diabetic incidence data.  I wanted to look at data sets where there existed previously established relationships.  I chose a public health issue of diabetic rates and obesity, it has been shown that there is a strong link between these two issues.  I thought it would be of interest to see how this relationship played out in New York state.  The data used were part of the 1,250 freely available data sets on the ny.gov website, an amazing resource for public health issues.  Four different sets were utilized: an income data set; a diabetic rate set; a diabetic mortality rate and an obesity rate data set(all from 2009).  All of these data sets provided granularity at the  county level.  The inclusion of the last three data sets are very straight forward.  Income data was included in this analysis for two reasons, first there is a long established relationship between income and diabetic rates.  Secondly, New York is the only state where the poorest county(Bronx) is directly adjacent to the most affluent county(Manhattan/New York County).  I was curious to see what relationships existed alongside this economic disparity.  New York state contains fifty-two counties so I wanted to find a way to represent this data that made comparisons between counties easy and also retained spacial relations.   Choropleth maps were ideal for this task.  These maps use color intensity to represent aggregated data within a geographic region, either intensive or extensive.  Luckily for me, the R programming language had several libraries to aid in this mapping, choroplethR had the shallowest learning curve.  Rather than just bury the reader in plots, I will present only the most interesting plots in the post.  But here is a link to a Shiny application that I created that will allow you to explore with all the data.  Shiny App

Here is the code for the for my loading and data munging.

Here is the choropleth map of diabetic rates for all the counties in New York state in 2009.  The values represent all the percent of the population that has been diagnosed by a doctor as being diabetic. 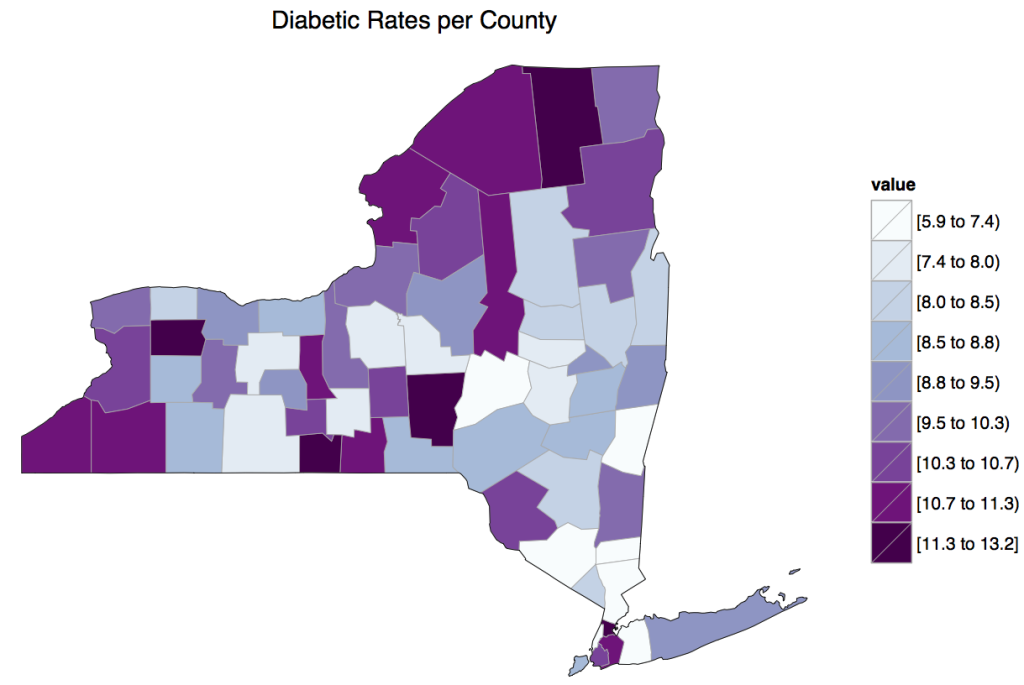 Here is a choropleth map of all the average incomes within the five New York City counties.  The disparity between Manhattan and the other four counties is striking. 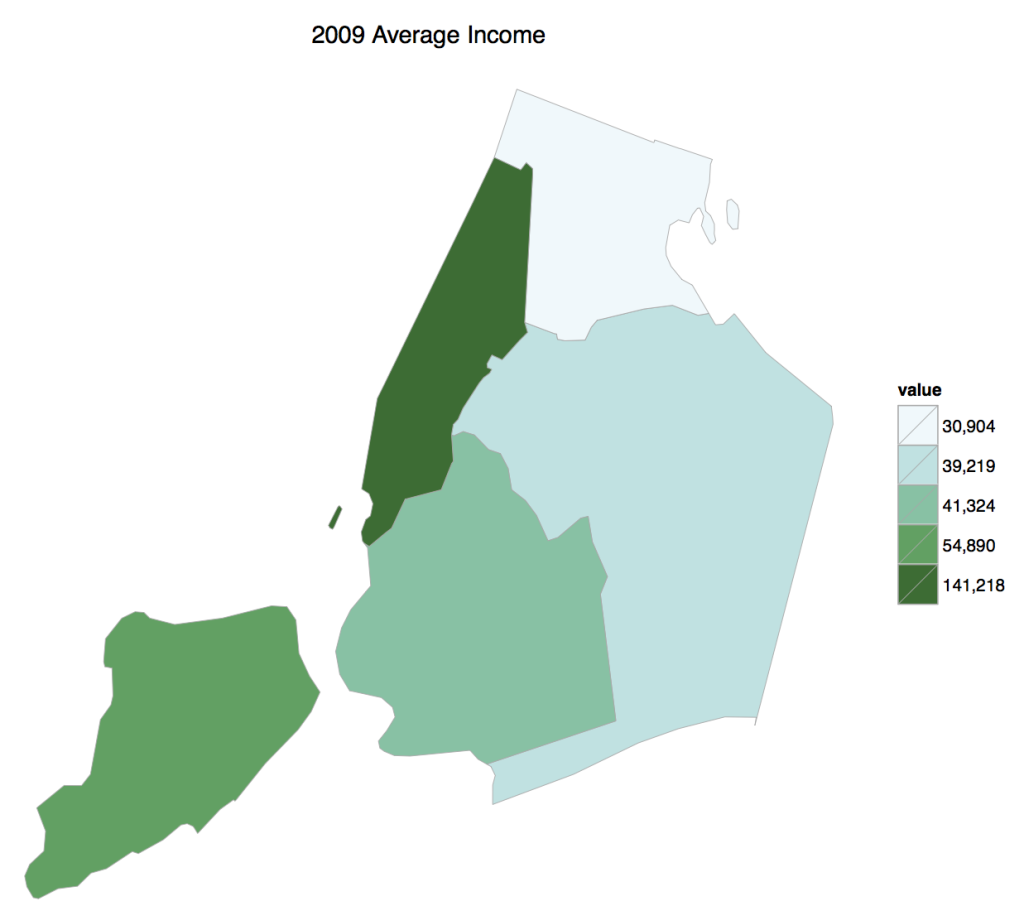 After the data sets had been joined to the FIPs county data set they could be visualized with choroplethR.  The code for the plots is listed here.

Here is a scatterplot exploring the relationship between the diabetic rates for each county and their corresponding obesity rate.  It's worth noting that this data is inherently normalized  due of it's ratio nature (incidence per 100,000 residents). 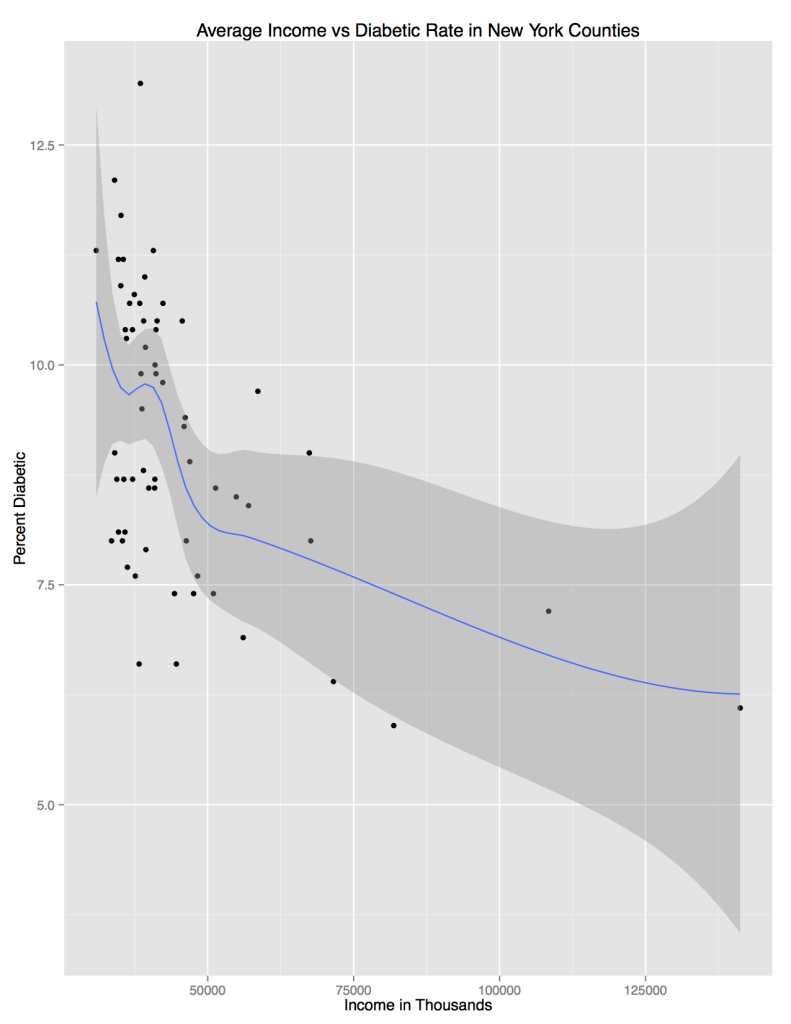 The data was also plotted in scatterplots to better visualize some of the non-spacial relationships within the data sets.  The code for the scatterplots is listed below.

The data substantiated the already established relationships between income, obesity and diabetes.  Counties with the highest average incomes had the lowest incidence of diabetes.  The link between obesity and diabetes was also shown.  Interestingly, counties with high incomes and high obesity rates had low rates of diabetes.  The link between income and diabetes may be as strong as the relationship between diabetes and obesity.  I haven't included my Shiny app code for the sake of space put it can be found on my Github here.My Github

Nate Aiken graduated from City College in 2014 with a BS in Biology with a focus in Neuroscience. His experience studying vision and hearing in labs at City and Rockefeller University led him to the bootcamp. He enjoys...
View all posts by William Aiken >

Google September 2, 2020
Google The time to read or pay a visit to the material or web pages we have linked to beneath.

Lorenzo Sànchez Mèndez March 14, 2017
Hi William Aiken, I`m Lorenzo Sànchez from Mexico. I`ve read your post and your application is very interesting. I will start to develop a data science application for diabetes mellitus E11 and E14, and I would like that you may explain me more about the process you followed, since the beginning to the end. Did you write a paper? if so, could you send it me ? This, in order to cite you thanks for your attention, I will be waiting for the answer My email: [email protected] Lorenzo Sànchez Mèndez

แหล่งขายที่นอนราคาถูก April 3, 2016
I don't even know how I finished up right here, however I believed this put up used to be great. I do not understand who you are however certainly you are going to a well-known blogger in case you aren't already. Cheers!

occasion auto March 17, 2016
I am in fact delighted to glance at this webpage posts which contains plenty of helpful facts, thanks for providing such statistics.

pinoy movies March 12, 2016
I really like what you guys tend to be up too. This type of clever work and reporting! Keep up the terrific works guys I've you guys to blogroll.

Hadlow Village Hall is set in the beautiful Kent countryside, and offers a great venue for your Club, Activity or Event. February 15, 2016
I take pleasure in, cause I found exactly what I used to be looking for. You've ended my 4 day lengthy hunt! God Bless you man. Have a nice day. Bye

anavar December 27, 2015
The 2 sites are undoubtedly listed over the complete of this amazing article. If that being said then you will may have Gram-Negative Folliculitis. Overcome to build started at this time.