One of the greatest political battles of these past few years is the issue surrounding climate change and its many factors. Scientists have long determined that carbon dioxide (CO2), a greenhouse gas emitted through human activity, has been a major contributor to global climate change. While battling environmental regulation and the future carbon tax, many politicians fail to realize CO2 comprises about 80.9% of all greenhouse gasses in the U.S..Emissions have been steadily increasing with population growth - In an effort to curb CO2 emissions, the Regional Greenhouse Gas Initiative (RGGI) is a program instated for the Northeast and Mid-Atlantic States (Connecticut, Delaware, Massachusetts, Maryland, Maine, New Hampshire, New Jersey, New York, Rhode Island, and Vermont). Sources of large carbon dioxide, such as power plants, iron and steel facilities within the states must regularily report their emissions to the EPA.

Instead of taxing, RGGI uses a market-based cap and trade approach that is – companies who don’t use all of their CO2 allowance can sell their excess for money to others. The program also includes other regulations:

RGGI’s compliance period began on January 1, 2009. With only 6 years of data, and a program that’s still developing, we cannot say if this is the solution or not. We can determine however, if we are headed in the right direction by trending the CO2 emission from the The following line graph shows the total CO2 emissions per quarter: 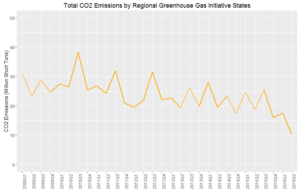 *NJ is omitted because they withdrew from the program in 2011.

We are trending downward, which is a good sign of course. There could be many confounding variables, such as potential downsizing of power plants because of tougher regulation:

*NJ is omitted because they withdrew from the program in 2011 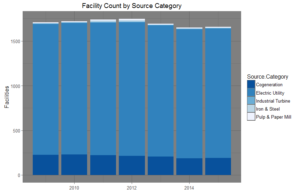 It looks like there are fewer facilities ever since 2013, though not by much that would affect our statistic. During 2012, they concluded that in 2014, there would need to be stronger regulations. The new enforced cap was 45% than it was prior. In order to determine the effectiveness of the program, we should take data pre 2014, and 2014 +. We can then compare the efficacy of the new cap:

*NJ is omitted because they withdrew from the program in 2011.

The distribution looks skewed, but good enough to do a two sample T-test; the outputs are displayed on the histograms above. What we see here is significant evidence that we have reduced our output on average per facility (~5,000 tons of CO2 per quarter). 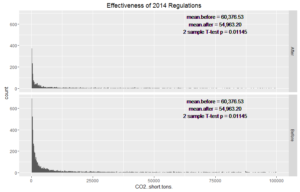 The program shows great promise – we can only hope that this initiative gets passed to the rest of U.S. Its only time that we’ve realized our environment comes with a cost, and that we have to do our best to preserve it for future generations. 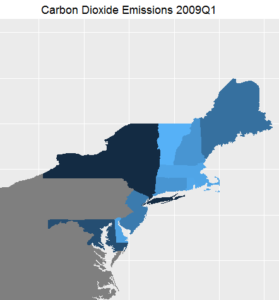 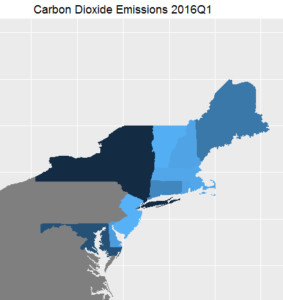