The skills the author demonstrates here can be learned through taking Data Science with Machine Learning bootcamp with NYC Data Science Academy.

According to Mintel, between 2016 and 2021, spirit sales have outpaced those of beer and wine market.   Because of this growing trend, there is opportunity to open a spirit’s store.

A prospective client is looking to tap an untapped niche by opening a liquor store targeting higher income millennials; staffed with people who are skilled in making at-home, primarily lower calorie cocktails.  The objective is to identify the optimal location for this new store. Millennials are more calorie conscious about what they drink than other generations.  The store would offer free samples of such drinks on the premises  and sell not only alcohol but  also the other ingredients that go into making mixed drinks.  Since this is a bit of a risk, he doesn't want to open too big of a store.

The prospective client wants to open the liquor store in Iowa and is looking for the three best locations.

To do this I needed to:

Given that there were not any categorical variables other than product category (e.g. whiskies, vodkas etc.) , K-Means was considered optimal to use in this case vs K-Modes and K-Prototypes.

With K-Means, initially K centroids are created at random.  Each point is assigned to the centroid that it is closest to using Euclidean distance.  Centroids are recalculated after each cluster is formed.  A centroid is simply a vector of means.  New clusters are formed  using the new centroids and points are assigned to their closest cluster.  The process continues iteratively until no new clusters can be formed.

As the K-means algorithm will assign every observation to one of k clusters with each computation contributing equally to the computation of the new means for that new centroid, considerable care should be taken to remove any outliers that may otherwise heavily distort these mean computations. 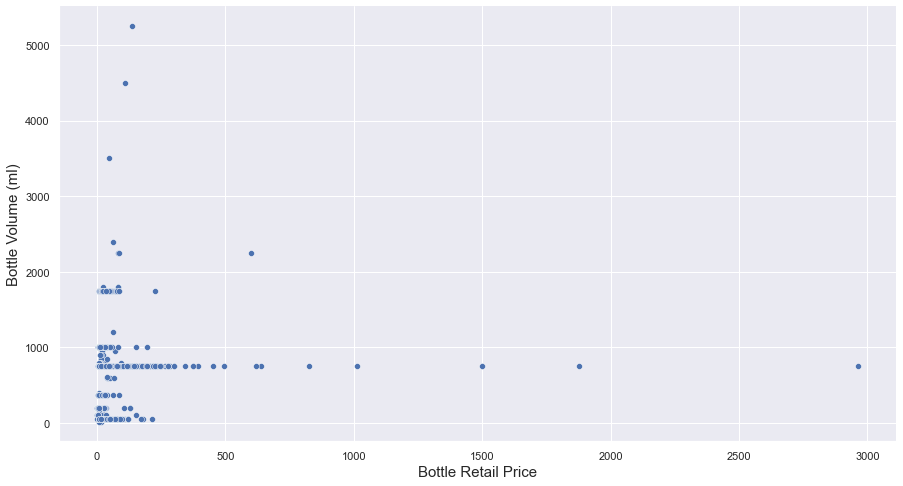 A product with over 2 million bottles sold is an additional outlier that was removed. 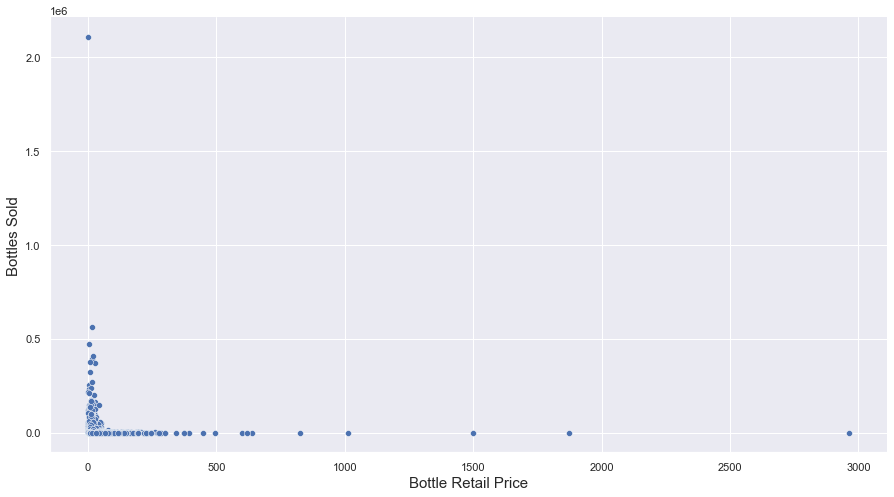 After outliers were removed, the features were standard scaled using sklearn library's Standard Scaler utility for use in the K-means clustering of the products. 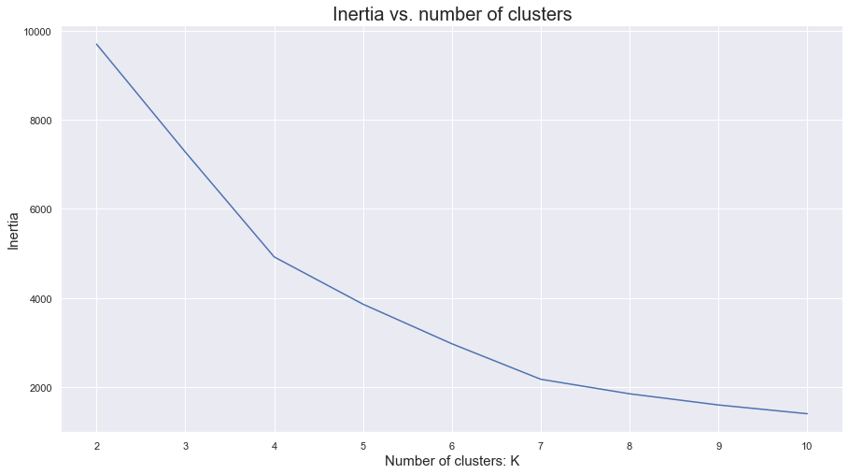 The four clusters developed are:

High End stands out because the median prices are so much higher than the products in the other clusters. 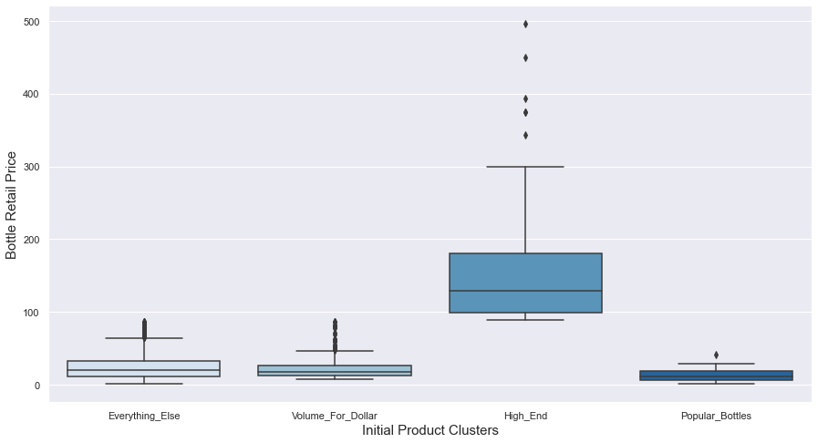 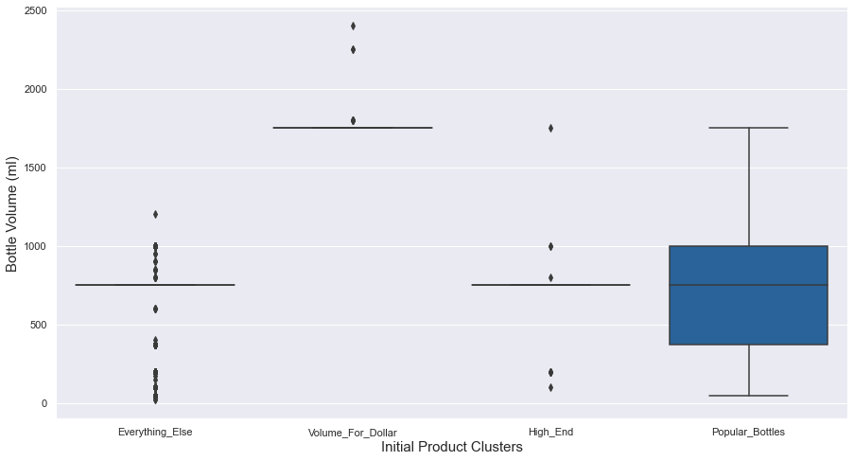 Popular Bottles stands out because the median bottle quantity sold is so much greater compared to other clusters. 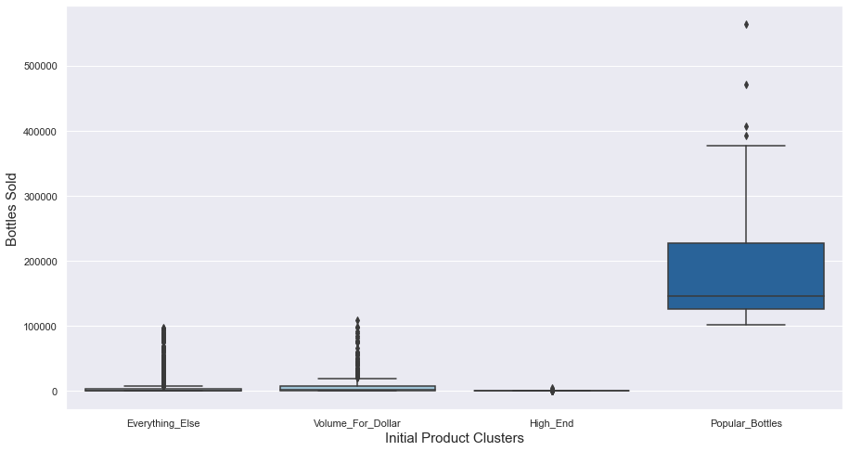 Nothing stands out about Everything Else other than it consists of such a large number of unique products and  a lot more revenue when compared to the other clusters.

Since Everything Else has nothing to distinguish it from the other clusters  and has the most revenue, a sub-clustering of Everything Else was performed.  Note that the silhouette scores for five, six and seven clusters were lower than than that of four clusters.

A K-means clustering on Bottle Price, Bottle Volume and Bottles Sold was used to develop the sub-clusters.

Before the sub-clusters were developed, the features were standardized.

The inertia plot for the sub-clustering of Everything Else indicates four clusters. 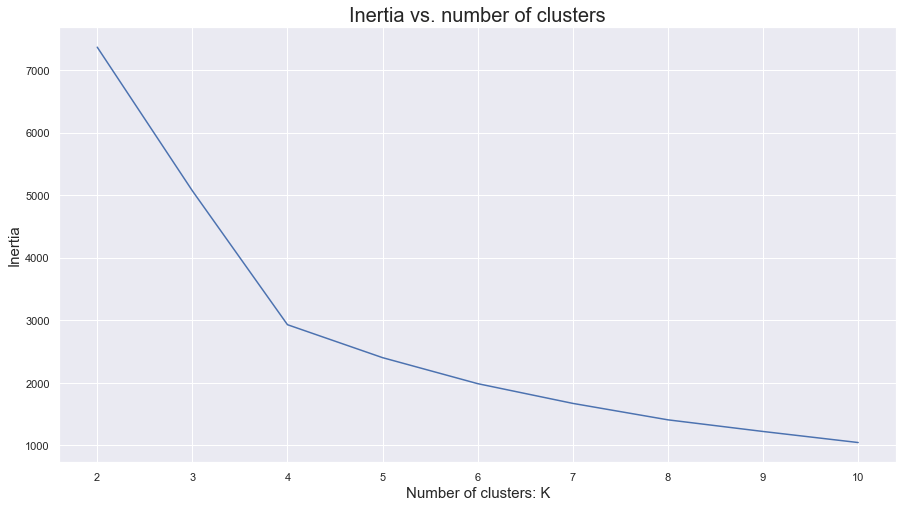 The four sub-clusters are:

Quick shots stands out since it has a higher cost per ml than the other sub-clusters partially due to the relatively smaller size of these bottles shown through Quick Shot's median bottle size being only 200 ml versus 750 ml for the three other sub-clusters. 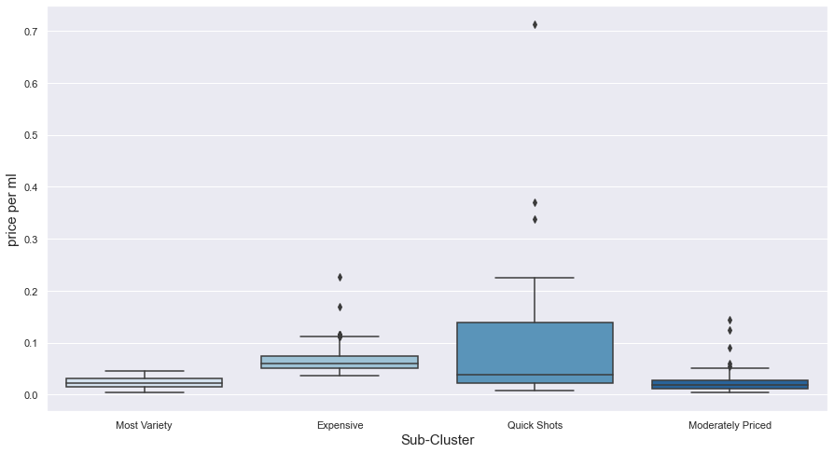 Expensive stands out here.  The bottle price is so much higher than it is for the other sub-clusters. 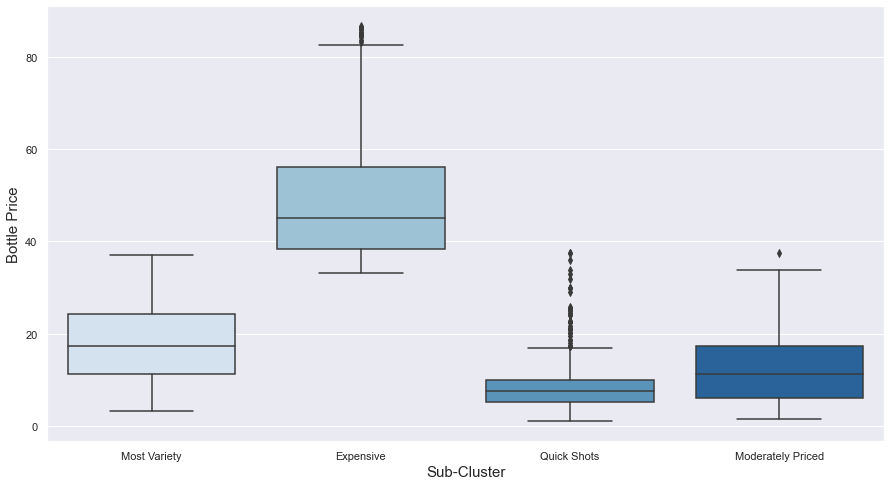 Moderately Priced is the least expensive.  The bottle prices of Quick Shots cannot be directly compared to the others because  the bottles are so much smaller and are more expensive on a price per ml basis. 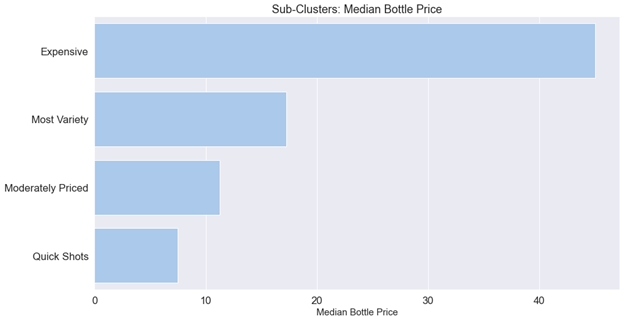 Most Variety has the largest variety of products (over 2,000) compared to the other sub-clusters.  On the other hand, Least Expensive has the smallest variety with only 136 different products. 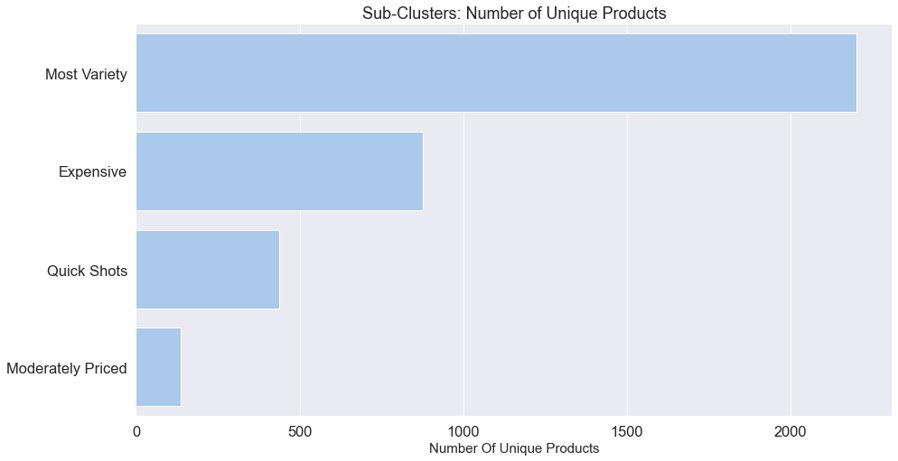 High End stands out here.  Expensive is higher priced than the other remaining clusters. 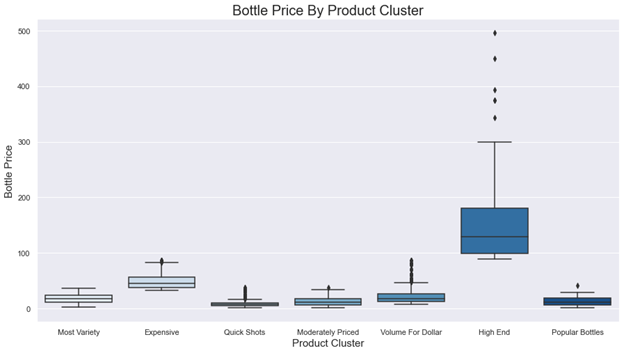 Popular Bottles generates the most revenue in each product category on a per product basis. Least Expensive follows. 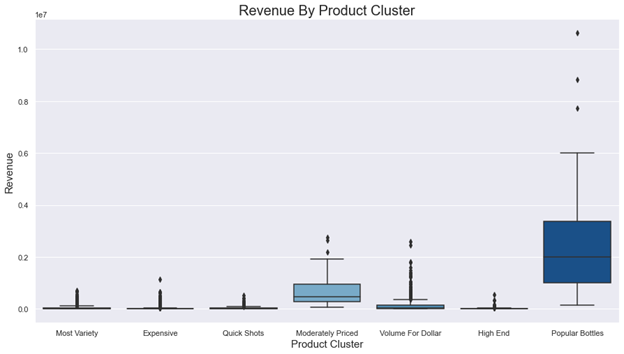 For the state of Iowa, whiskies are the number one alcohol type with vodkas ranking #2. This aligns with vodka being one of the most popular alcohol types nationally.

Given that High End accounts accounts for less than one percent of the revenue of every store on average and given Quick Shots suffered from data quality issues, five of the original seven product clusters were used to feature engineer variables to use in the clustering of the stores.

I clustered the stores using the total number of unique products in each store and five features engineered from the product clusters.

The five features engineered  are the percentage of revenue from each store from each of the following product clusters.

Before clustering, outliers needed to be removed:

First stores with number of unique products over 1,750 were excluded. 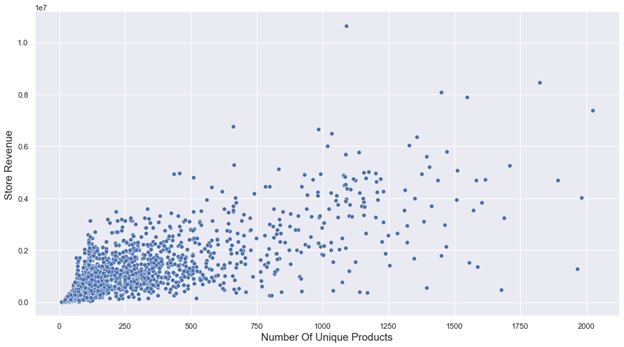 Secondly 18 outlier stores, discovered during an initial clustering, were excluded. The outliers are mainly distilleries and not stores. A distillery is where hard liquor like whiskey, gin, vodka, rum, etc. is made on the premises.

Features were standardized before clustering.

The inertia plot for the clustering of the stores indicates four clusters.  The silhouette score indicated the same. 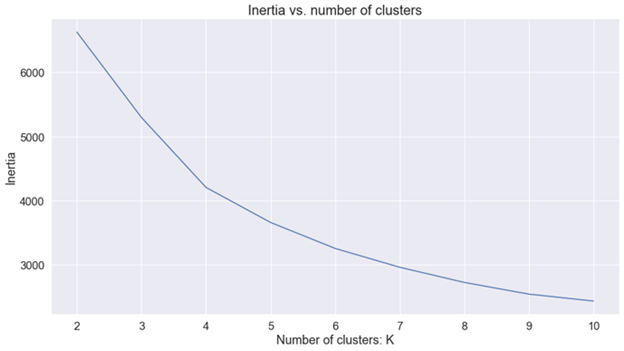 The four store clusters are:

Apart from convenience stores, the clusters were named based on store revenue. 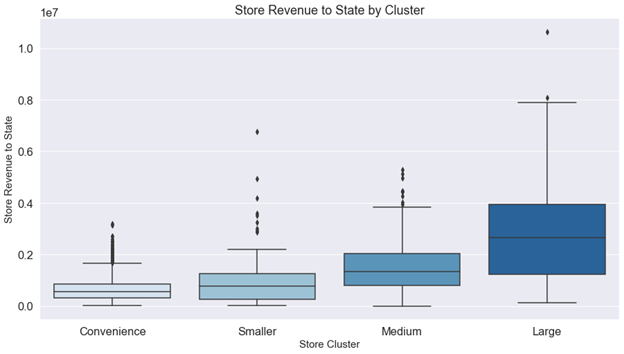 Hy-Vee is the largest supermarket chain in Iowa.  They typically  sell a wide variety of Spirits.  They also have dedicated liquor stores and  some gas stations.

Fareway Stores is the second largest supermarket chain in Iowa.

Mom and pop stores and small chains fall into the other category. 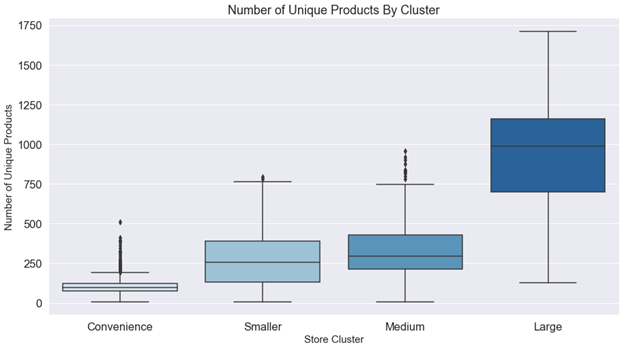 Popular Bottles make up a smaller percent of store revenue at Large stores than they do in the other store clusters. 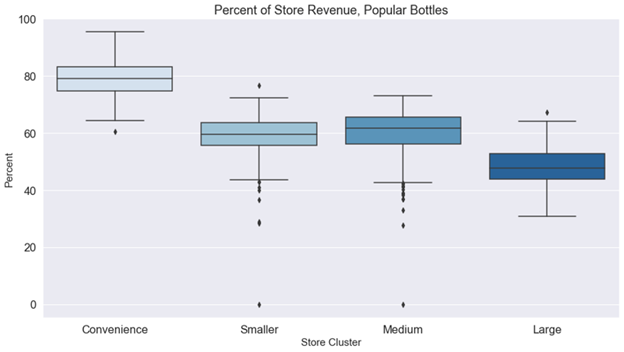 Volume for Dollar with a low price per milliliter are mainly carried at Medium and Large sized stores. 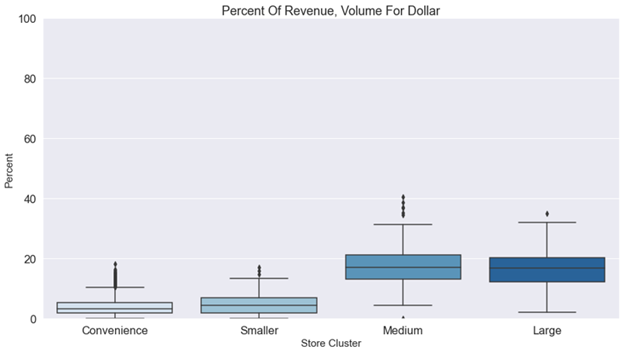 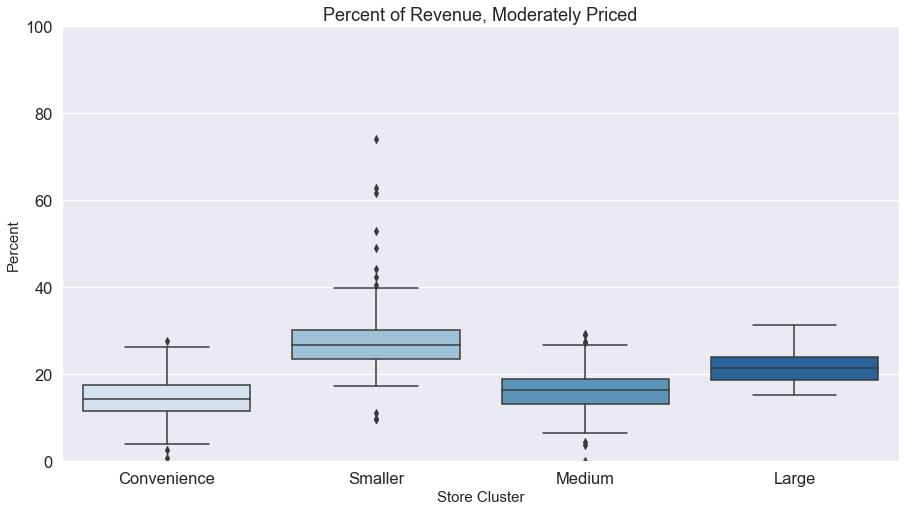 Putting it all together with census data

Since my prospective client's goal is to open a liquor store targeting higher income millennials, the locations selected (zip codes) must fit this demographic.

To assess degree of local competition, I created the following variables at the zip code level.

To access competition, I created the following for each zip code.

My prospective client also wanted an area that is somewhat urban since the market research said to think young, think urban.  Initially, instead of  using the population density  as a selection criteria I used population > 10,000.  However, although that resulted in a larger number of locations (18), it included some rather sparsely populated areas.  Some zip codes selected using that criteria were spread out over 100 square miles. 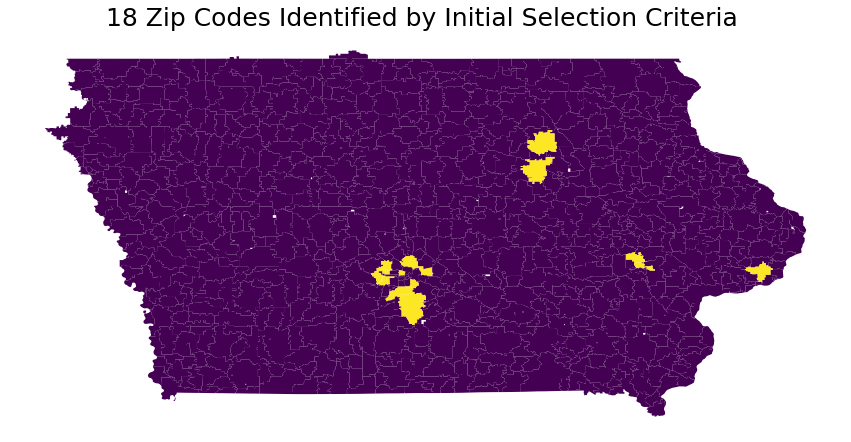 When population density was used instead it narrowed it down to just nine.

Of  the nine, the top five locations based on population per store were further evaluated.  They are

Des Moines has the zip code which is the highest in population density.  Waukee is the lowest. 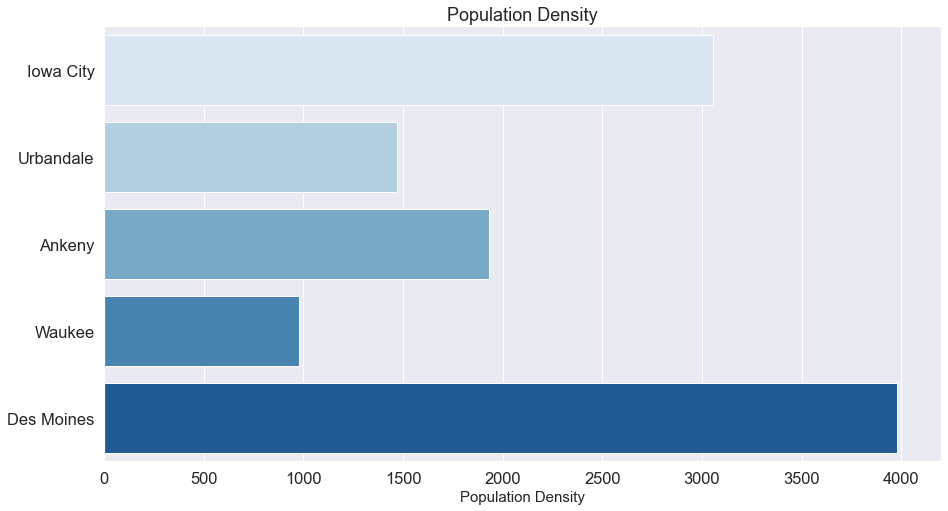 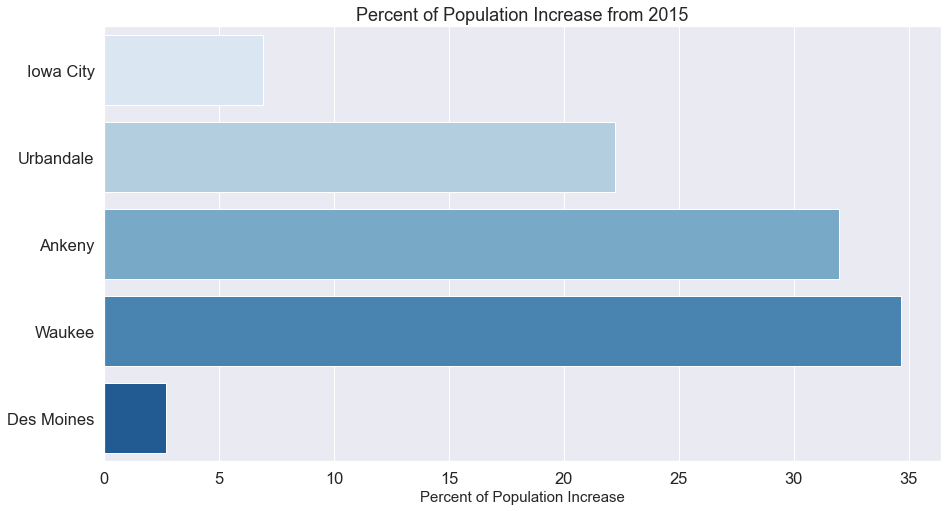 Ages for millennials range from 26 to 41.

The closest that I could come to that using census data is 25 to 44.

Ankeny, Waukee, and Des Moines have a higher percent of the population in the target age group than Iowa City and Urbandale.  With respect to median age, Iowa City is the youngest which is most likely because the University of Iowa is located there.

The chart below paints detailed picture of the competition.  Des Moines clearly has the most competition. It also has a medium sized liquor store and a small liquor store.  In addition, it's median income is only slightly above the median for the state and it has the smallest increase in population. For these reasons, I would not recommend this location.

Note that there are other zips code in Des Moines than the ones shown throughout this analysis.  It is a city of over two hundred and twenty thousand. 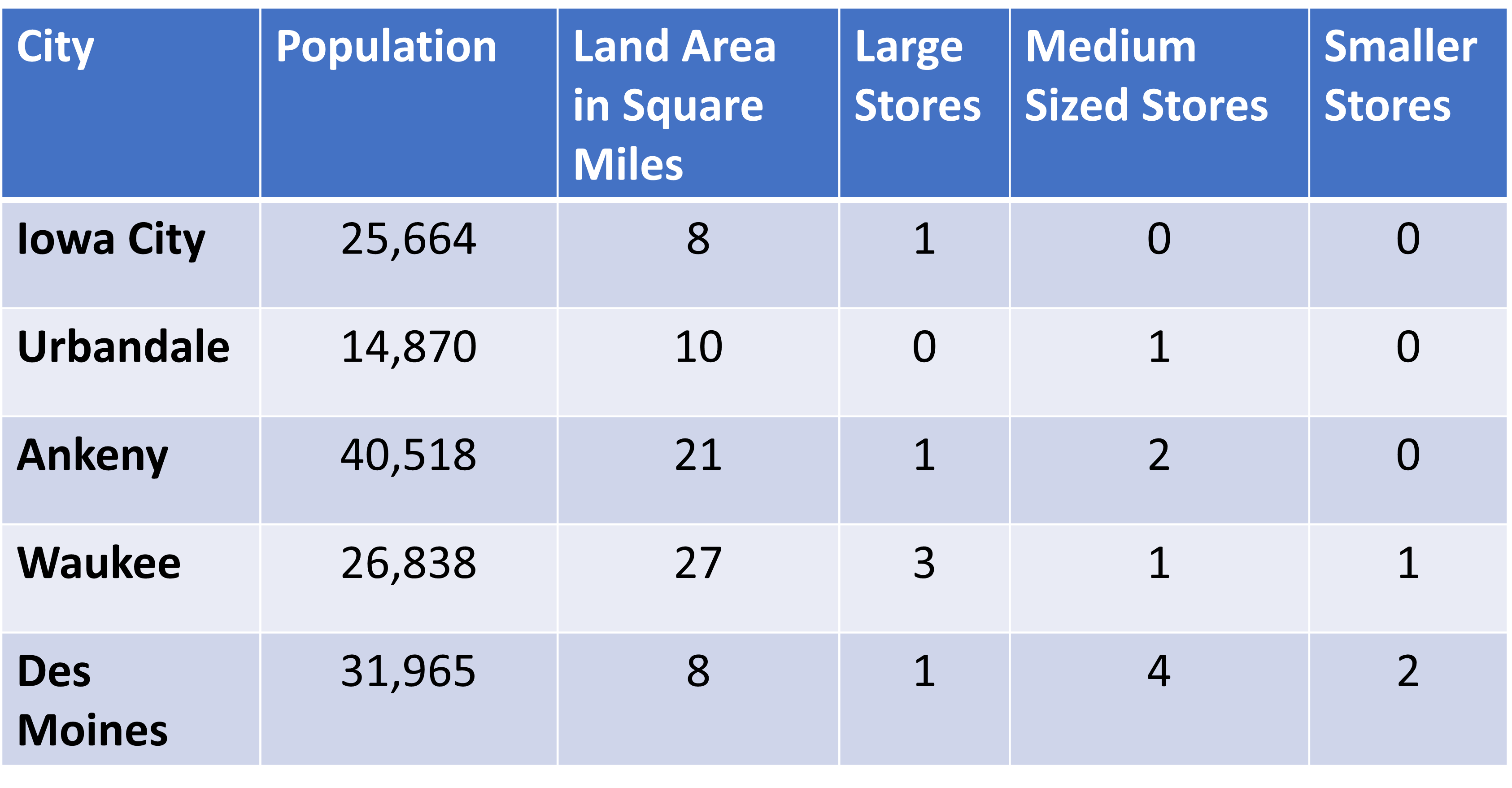 Iowa City has the least competition.  However, the median income is only slightly above that of the state, the population has grown less than ten percent from 2015.  It has lowest median age which as mentioned is most likely because the University of Iowa is located there.  Lastly, it has the smallest percent of the population age 25 to 44 which is just below what it is for the entire state of Iowa.  Since it  doesn't target my prospective client's desired demographic,  I would not recommend this location.

That leaves Urbandale, Ankeny and Waukee.  They are all high income and have populations that have grown over  twenty percent from 2015.  Growing populations mean more customers.