This article is not a social commentary on US H-1B immigration visa as the featured image of the article might prelude .The image is an "attempt" at humor about concerns of outsourcing jobs among some sections of US population to Indians by the author who himself is of Indian origin and like the  character  "Apu"  from Simpsons in the image came to US from India on a student visa to do his PhD and as it would happen to be made this app to showcase skill-sets to potential future US employers.

Unlike Apu who  didn't want to go home after finishing education and had to live in US illegally for US not having an H-1B visa program at that time , the author wanted to explore  the chances of an application getting approved,  how long it takes for an application to be processed , which profession , job title , employer has high volume for applications and the success rate for applications.

The US H1B visa is a non-immigrant visa that allows US companies to employ foreign workers in specialty occupations that require theoretical or technical expertise in specialized fields such as in architecture, engineering, mathematics, science, and medicine. The job must meet certain criteria to qualify as a specialty occupation. Under this visa a US company can employ a foreign worker for up to six years. Individuals are not able to apply for an H1B visa to allow them to work in the US. The employer must make the petition for the employee. H1B visas are subject to annual numerical limits. Current immigration law allows for a total of 85,000 new H-1B visas to be made available each year. This number includes 65,000 new H-1B visas issued for overseas workers in professional or specialty occupation positions, and an additional 20,000 visas available for those with an advanced degree from a US academic institution.For details you can follow the link below:

2. All about the Data

The case disclosure file covers VISA determinations issued between October 1, 2015 through June 30, 2016.Link to the data is below.

The web app's basic layout is designed with a principle of being simplistic, intuitive and easy to use. It provides three types of data exploration: “Temporal”, “Statewise”, and “Top of the Bunch”.  The Temporal analysis explores the question of how long it takes for applications to be processed, as well as how many applications are submitted on a daily basis.   and time series of applications submitted and processed . Statewise analysis allows the user a to choose a number of different visualizations to dig into statewise data.  Top of the bunch answers which states , jobs ,  job titles and employers have the most  applications and highest salaries.

Most applications seem to be processed within a week's time frame as is evident from the plot, with the mode being on day 6. 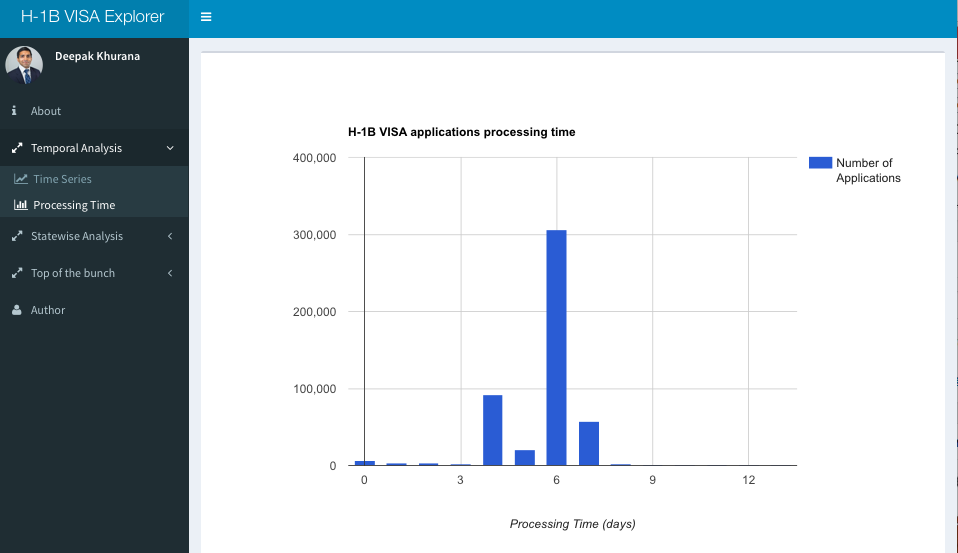 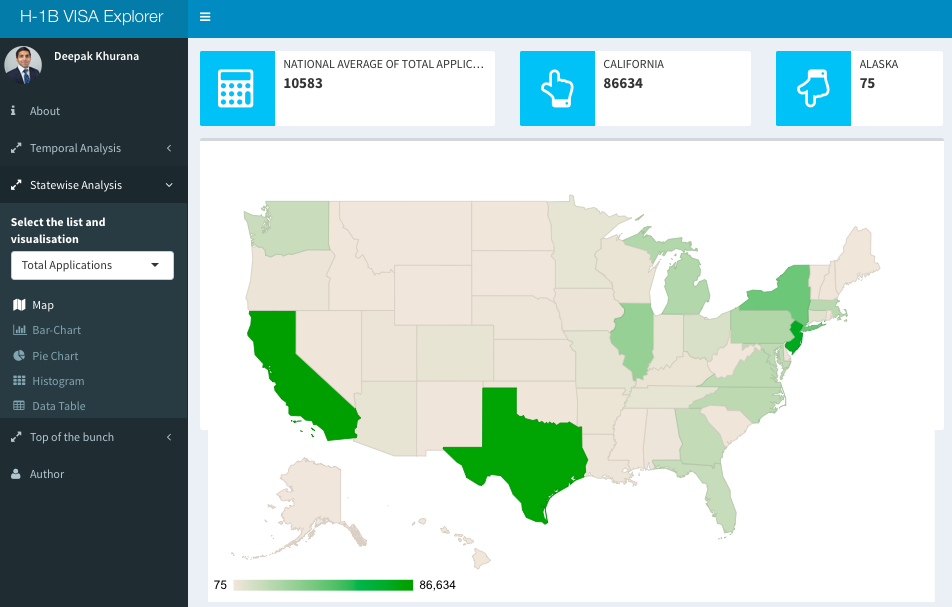 Average salary for H-1B Visa is more or less uniformly distributed with 45 states within 60k-80k range.

Approval percentage for applications is quite high with a minimum of 88 % to as much as 98 % in a few states. It indicates that once an application gets selected via lottery it has a very high chance of being approved in all states. 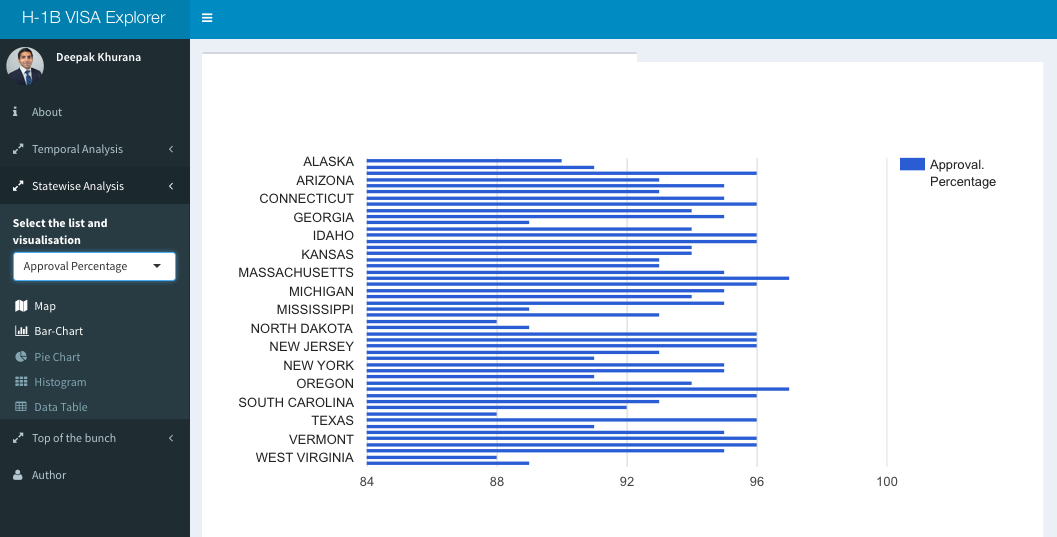 The app lets the user explore up to top 20 results of by  states, occupations, job titles and  employers in terms of number of applications being approved for H-1B visa and salary ( Average salary for top states) . Below are some interesting features .
Bar chart below shows California , Texas , New Jersey and Illinois have the most applications approved .

IT jobs and Financial analysts jobs account for bulk of H-1B visas approved .

IT and consultancy companies from India are the top beneficiaries of the the program. Google and Microsoft are among the US companies that stand out.

Job titles are related to occupation category so the same result of software professionals and financial analysts getting most approved applications still shows here.

The app also lets users explore top states, occupations , job titles and employers in term of salary .  Though number of applications are dominated by software professionals .  Top salary occupation and job titles are ones belonging to medical field .

If one is interested in knowing which specific employer offers the highest salaries here is a graph.

Surprisingly, North Dakota , Washington and Maine are the top three states in terms of average salary.