How Much is My Used Car Worth?

In this web scraping project, I set out to see which factors affected the resale price of a used car, and by what factor.

To do this, I web scraped Carfax: https://www.carfax.com/.

Carfax is a website that is well known for checking the history and status of used cars to help used car buyers from being sold a car that has problems that the buyer is unaware of.

Using Selenium, I extracted the URLs of the webpage for each car using the following used filters:

- Sold within a 50 mile radius of New York city

Once all the URLS were collected, I extracted the detailed information for each car using scrapy. Here is a sample webpage: 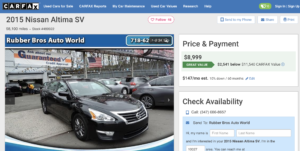 The prices collected are based on dealer selling prices, not the current market value.
Due to time restraints, I collected data for 6747 used cars. It was collected in a CSV file:

I ran several analyses of the data that was collected. First, a scatter plot of price vs. year: 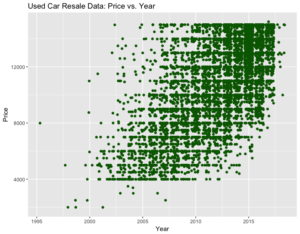 Boxplot of Price vs. Year: 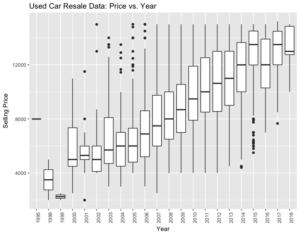 Barchart of Price vs. Year: 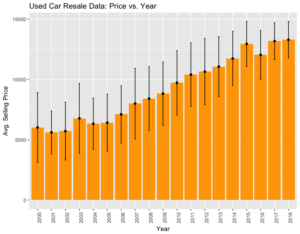 I was curious to see why the trend of prices decreasing as the age of the car was not followed in the year 2015. I noticed something interesting when looking at the number of listings per year. 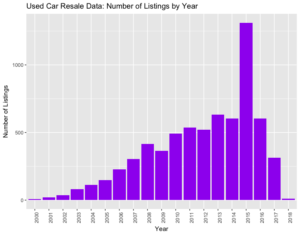 Because many cars are leased for 3 years and returned, the number of cars that are 3 years old being sold is significantly higher! This could be a factor as to why the sale price in 2015 was higher than in other years.

Another large factor in the resale of cars in the mileage. The following is a histogram of the number of used cars sold by mileage: 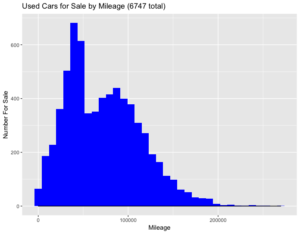 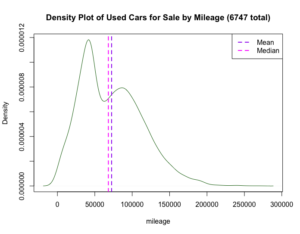 The values for Mean and Median:

A hex chart of price vs. mileage: 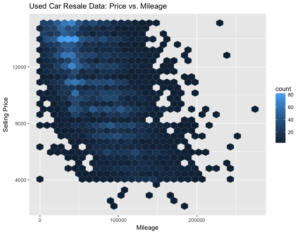 A density plot of price vs. mileage: 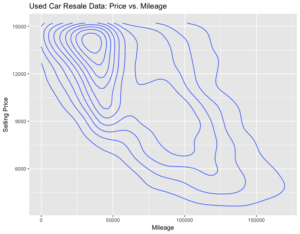 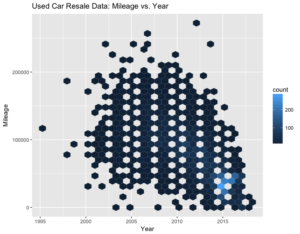 When comparing by "make" since the filter of less than $15,000 was set, the data could be skewed for luxury brands in particular, but the following shows a general view of the resale prices categorized by make: 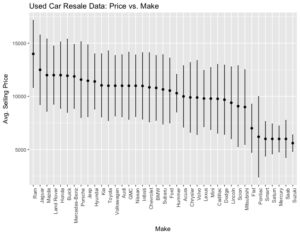 The following is price categorized by the body style: 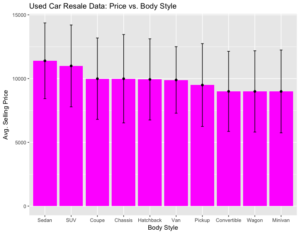 For those who are green, here is a breakdown of the resale price by energy source. (Note: there was only one result for "Alternative" energy source, so the data may not accurately reflect the category.) 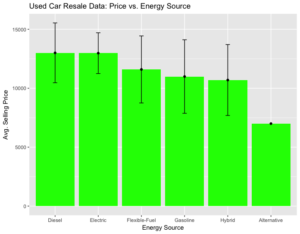 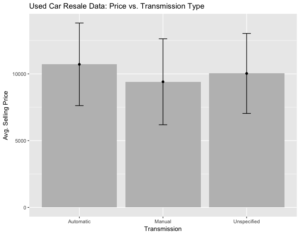 I compared the automatic vs. manual transmission purchases with a two-sample t-test to see if the means were statistically different: 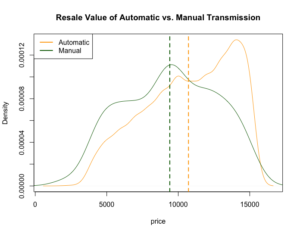 They were statistically different! A car with an automatic transmission sells for approximately $1300 more than a car with a manual transmission.

Many people are concerned with the title status of a new car. Here is the breakdown by title status: 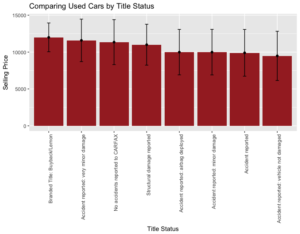 An interesting comparison was between resale values of cars that had accidents, and cars that did not: 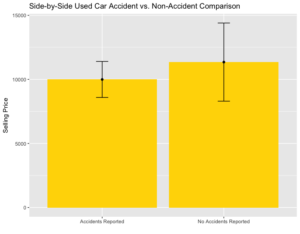 It is clear that No Accidents Reported had a significant impact on the resale price: 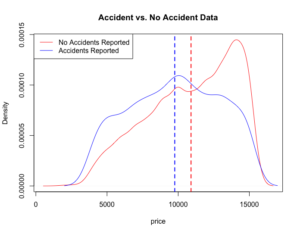 Ultimately the two-sample t-test showed that the means of these categories were different. The mean difference was $1150.

Finally, based on the data, here is a breakdown of the models with the top resale value: 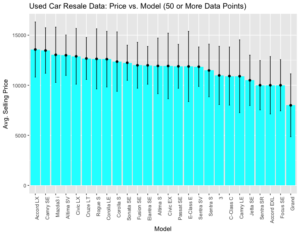 Sedans resell better than other body types of used cars. (By observation, t-test not performed.)

These results can be applied not only for those who are interested in purchasing a used car, but also for:

Anthony Parrillo June 7, 2018
Thank you for your comment and question Bernardo. Nice graph also! If the purpose of the graph is to display exact precision of year vs. price, then you are correct. My purpose in creating this "jitter" plot was to allow the viewer to more naturally see the overall upward trend between year and price. A jitter plot takes plots for the years (ordinal data) and moves them slightly to the left or right so that all the dots are not lined up vertically. Another purpose in using the jitter plot was to represent the data in a way different from the following graphs which show the data aggregated by year, which results in a more discrete visualization (e.g. boxplot, bargraph).

Bernardo Lares June 7, 2018
Thanks for sharing... quite intereseting. But why, in the scatter plot of price vs. year, you have points everywhere instead of only years? Shouldn't you get something like https://imgur.com/a/cM8EiWN ?