Diabetes mellitus is a chronic disorder associated with disturbances in carbohydrate, fat, and protein metabolism and characterized by hyperglycemia. It is one of the most prevalent diseases, affecting approximately 24 million individuals in the United States.The motivation of this study is to use data science to help focus treatment development on more effective forms of treatment. In this work, I use the Health Facts database (Cerner Corporation, Kansas City, MO), a national data warehouse that collects comprehensive clinical records across hospitals throughout the United States. [1]  The data is an extract representing 10 years (1999–2008) of clinical care at 130 hospitals and integrated delivery networks throughout the United States. The final data includes 69,051 patients’ distinct visits with 50 variables.

Five factors are investigated for revealing the information of diabetic patients and the relation of HbA1c testing result and patients’ readmission ratio back to hospital.

1). The diabetic population distribution in age and race

The plot below shows that patient numbers dramatically increase with age, and reaches a peak in the range of 80-90 years old.
Within the diabetic population, the highest count is Caucasian, then African American, Hispanic and Asian respectively. Because the data is collected in the USA, the result strongly depends on the specific demographics of this country. 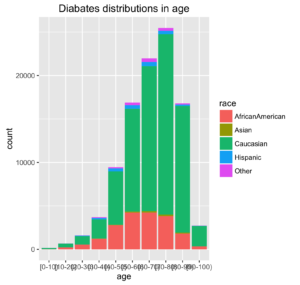 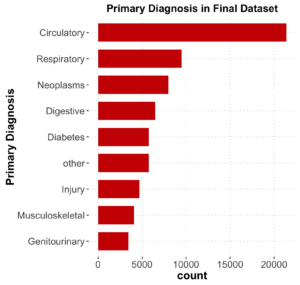 A subset of the original 69,051 diabetics was chosen for further study.  The selection was based on including only those patients whose initial diagnosis was performed using the HBA1c test, as this is test is unique in being able to identify how well the disease is being controlled.  12,000 subjects, all diagnosed with HBA1c remained in this study for further investigation.

These 12,000 subjects were further broken out into three groups: those whose diabetes is  under control (“normal”), and two groups whose diabetes is not under control.  In one instance (“high without change”) the doctor did not change medication despite the high occurrence of diabetic symptoms, and in the third group (“high with change”) the doctor changed medication in response to the diabetic symptoms.

The objective of this study is to understand the relation of HbA1c test result and the medication numbers. 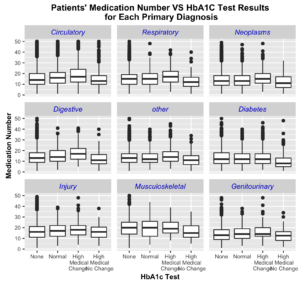 One of the features to demonstrate an effective treatment is the readmission rate of patients back to the hospital within 30 days. This bar plots show the relation of HbA1c test and readmitted ratio by primary diagnoses. 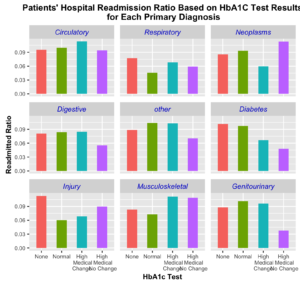 For neoplasms and injury patients with high test result, the changed medication reflects a lower readmitted ratio than the previous medication.

The readmitted ratio by medical specialty is plotted in the bar chart.  Patients with hematology/oncology, oncology,  and vascular surgery ranked among the highest readmitted rates.  This suggests that these diabetic patients are very likely to return to the hospital in short time. On the bottom of the chart, the patients with obstetrics/gynecology and otolaryngology issues show very low readmission rates.

This study looked at diabetic patients from 1999 to 2008. First, we found that the diabetic population is increasing with age.  The rates vary for different ethnic populations, from Caucasian (the highest) to  African American, Hispanic and then Asian, respectively. Second, we found that many patients with diabetes have other primary diagnoses, such as circulatory, respiratory, neoplasms, digestive,  injury, musculoskeletal, and genitourinary in sequence by population. Third, compared with normal test results, when HbA1c high test with medication change, the number of medications increased. However, for those high test result without medication change, the number of medications is decreased. Fourth, we looked at the HbA1c test impact readmitted ratio. We found strong evidence of when there is a need to change medication, based on the diagnosis.  Fifth, the diabetic patients  with different primary diagnoses show different readmission rates.

Maryjo November 9, 2016
This is a very great hints especially to those new to blogosphere, short and exact info... Thanks for sharing this one. A must read article.

Hba1c Diabetes Ranges Chart | Play GTA for free September 18, 2016
[…] Impact of HbA1c test on diabetes treatment from 1999 to 2008 – Diabetes mellitus is a chronic … readmitted ratio even though we are lack of HbA1c test results corresponding to each medical specialty. The readmitted ratio by medical specialty is plotted in the bar chart. I find the patients with hematology … […]