Specifically, the six land types are: the cropland, including land planted for crops, cropland used for pasture and idled cropland; the grassland pasture and range, including all grazing land, cropland use of pasture and grazed forests; the forest use land, excluding forest land in parks and wildlife areas and other special uses; the urban and rural residential areas; the special-use areas, including rural transportation, national state parks, wilderness and wildlife areas, national defense and industrial areas, and farmsteads and farm roads; miscellaneous and other uses, including tundra and swamps.

ERS has been providing major land use estimates in the United States for over 50 years. The land cover data is the longest running, most comprehensive accounting of all major uses of public and private land in the United States. The program was started in 1945 and has been published about every 5 years.

For the cropland, the highest rate of coverage is found in corn belt, northern plain and lake states, with Iowa ranking first (74.756%) and 26729.71 million acres. Maine is found the highest rank in forestland covering 87.863% of whole state and 17354.62 million acres. Northeast and southeast states have relatively higher forestland coverage than other regions. There is a clear line between U.S. east and west to divide the grass pasture and rangeland of high percentages and low percentages, with Wyoming ranking first (71.854%) and 44653.06 million acres. Alaska ranks first for the special land type (39.164%) and with 143357.95 million acres, as this state has great portion of national state park and wildlife areas. For the urban land cover type, New Jersey ranks first, with 38.261% and 1816.26 million acres. The entire east coast, corn belt states, Texas and California have higher portion. Alaska has the highest rank of miscellaneous land type, with 34.94% and 127898.41 million acres. 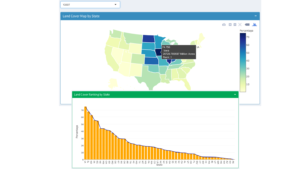 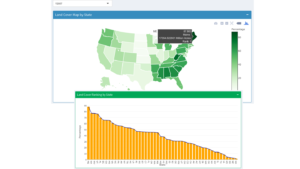 The cropland coverage dropped in early 1960s and quickly rose in 1970s, and kept going down until 2007, which corresponds to the extreme weather caused droughts. Corn belt and northern plain states, with approximate over 50% coverage led other states. The forestland change trend is quite fluctuated. The percentage for all regions dropped between 1945-2000 and soon rose until 2007. Northeast, southeast, Appalachian and delta states led during the entire period than other regions. For the grass pasture and rangeland, the lines for all regions normally dropped from 1945-2000 and rose up after 2000. Southern plain and mountains states led. All regions slowly rose up through entire period for the special land cover type, while the urban land type rate increased rapidly through the whole period, which reflected the urbanization trend in U.S.. The miscellaneous land cover type fluctuated for all regions. 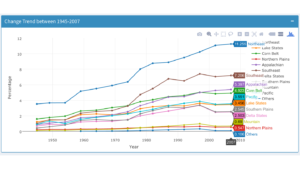 Correlation between crop, forest and grass 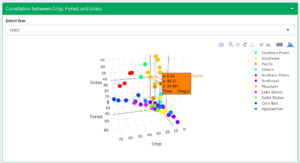 If analyze land cover information by specific state of different regions, it can be found that: 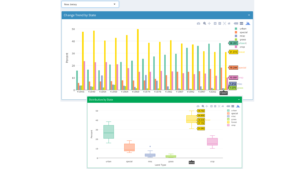 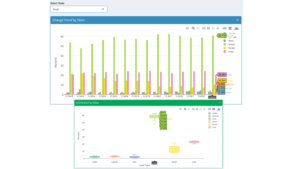 It can be summarized that cropland across most of regions dropped a couple of percentages, while forestland and grassland fluctuated during the entire period and rose a little by 2007. Urban land dramatically rose for all regions by 5% - 7%. Crop, grass and forest took approximately 75% of total percentages for most of states The major land cover types for different regions are: forestland dominated east coast and south central states, cropland dominated corn belt, northern plain and lake states. Grassland dominated northern and southern plain as well as mountain states. Urban land dominated northeast, southeast and southwest coast.

Data tables and source code can be downloaded from the following Github repository here.