The average American spends 4 hours a day listening to music (SPIN) and 93% of Americans listen to music daily in some capacity (EDISON). Almost half of that listening is via AM/FM radio, but music streaming services are gaining a greater and greater market share and have even turned around the declining revenues of the  music industry. 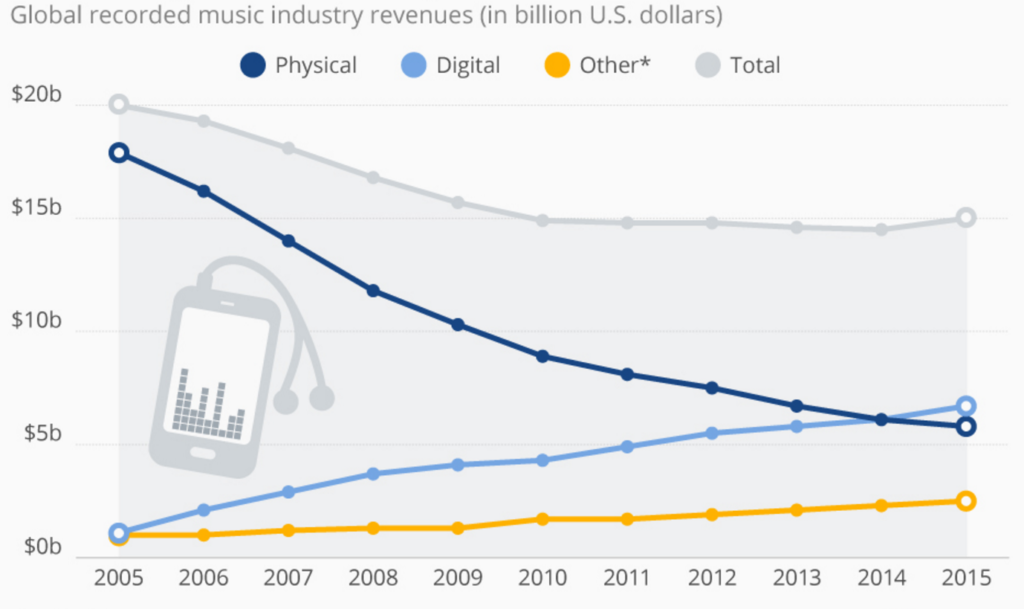 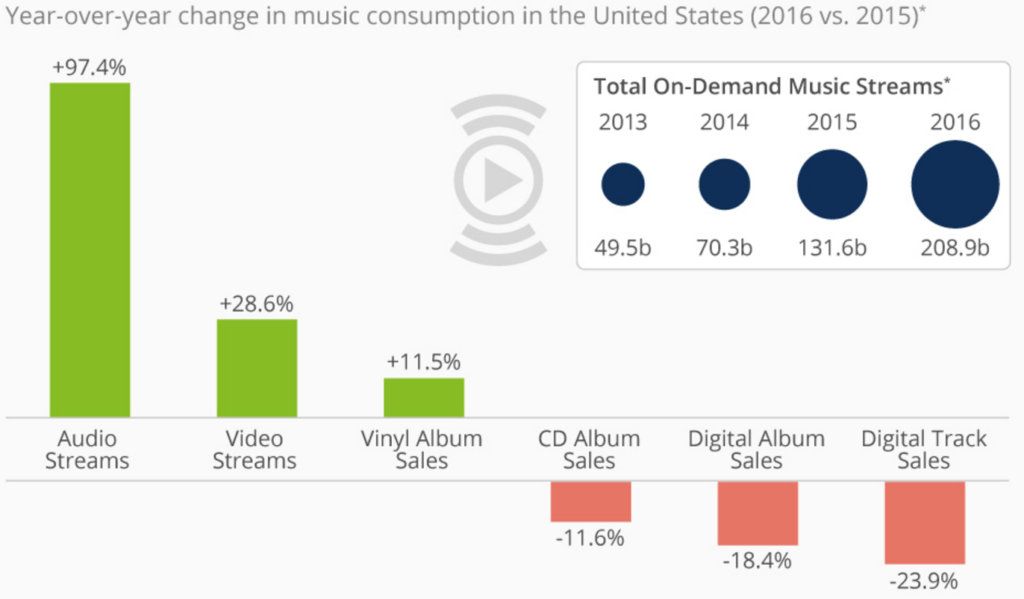 This success breeds competition among streaming providers to increase customer acquisition and retention by creating music recommendation algorithms that have just the right ingredients to serve up the tunes their customers crave.

Let’s first take a look at one of the pioneers in the music streaming service world: Pandora. Pandora was established in 2001 and has had a decreasing market share among newer streaming competitors. 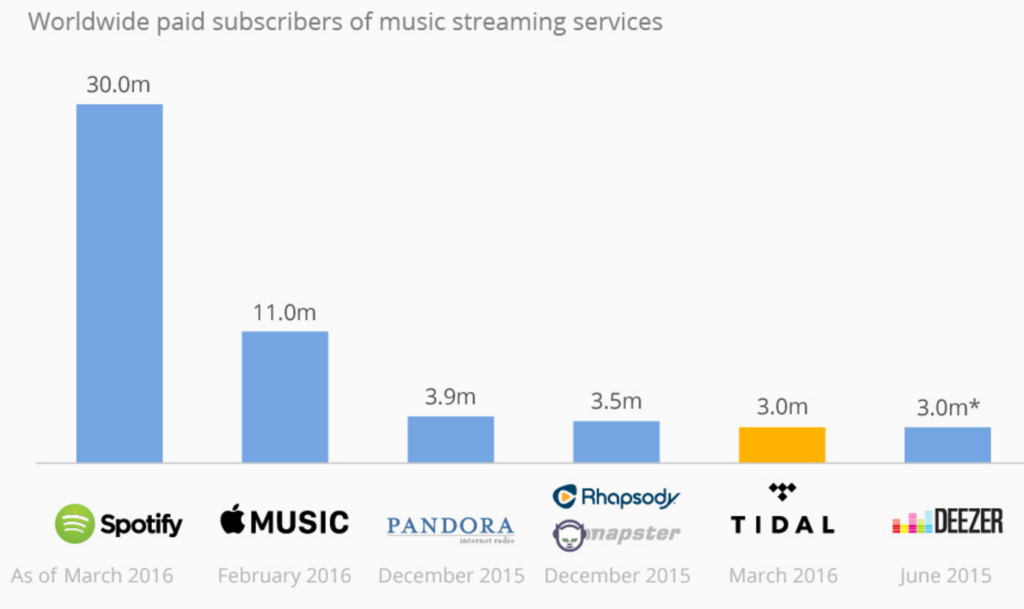 Why is this? I personally believe it is because of the nature of the recommendations on Pandora. Pandora only allows users to create playlists based on one artist or song, which often doesn’t encapsulate the original mood the listener was looking for and yields poor suggestions that often are repeated after as little as 10 songs later. On the other end of the streaming service spectrum are platforms like 8 tracks, which do suggest playlists that a user may be interested in listening, but all of these playlists have to be manually created by users. Services like 8 tracks have more dynamic playlists than Pandora, but again these services rely on users to actively create playlists and then suggesting the correct playlists to users. Somewhere in the middle of the human editorial and algorithmically generated playlist spectrum of music streaming services is Spotify. This compromise is one of the main reasons Spotify has the largest market share as of March 2016.

Spotify uses a combination of collaborative filtering and other playlist statistics to suggest very poignant songs to users that feel like that music guru friend you trust is making the suggestion. Spotify's collaborative filtering works by analyzing a users' playlist and finding other users' playlists that have the same songs, but maybe a a few more, and then will suggest those additional songs to the original user. Spotify not only uses this method for song suggestion, but also weights songs based on whether a user favorited it and listened to it many times following the initial like or even when a user is suggested a song and skips it within the first minute. Because of this combination of collaborative filtering and certain statistics tracking, Spotify can suggest extremely accurate song recommendations that feel eerily familiar. As great as Spotify's recommendation engine is, what if there was way to build upon its already impressive algorithm and to suggest songs that are even more playlist specific.

The general concept behind Muse is simple. Where Pandora suggests songs based on a single seed artist or song, Muse takes into account an entire playlist, the attributes of each song within a playlist, and the play counts of each song to form a better query on the new Spotify API endpoint for recommendations.

In early 2014, Spotify acquired EchoNest; the industry’s leading music intelligence company, providing developers with the deepest understanding of music content and music fans. Through the use of Spotify's API, which now allows access to these EchoNest services, developers can provide seed information and target attributes in a query and the API will send back recommended songs in its response. This EchoNest API endpoint is the backbone of many suggestive services like Shazam, Pandora etc.., As you can probably imagine, choosing the best query parameters is thus very important and indeed this is what determines the accuracy and relevance os the  recommendations the API responds with. As stated previously, Muse optimizes these query parameters to be as representative of an entire playlist as possible and therefore bring back recommendations that are more relevant. So how does Muse do it?

Upon login via Spotify oAuth, users automatically see their local iTunes playlists and Spotify playlists on the left-hand column. If for some reason, their iTunes Library XML file is not at a standard location on their computer, users can specify the correct path for Muse to look for the file.

From here, a user can click on a playlist, which is where the magic of Muse takes place through the following algorithmic process which I have appended a diagram below followed by bullet points to explain each step in greater detail: 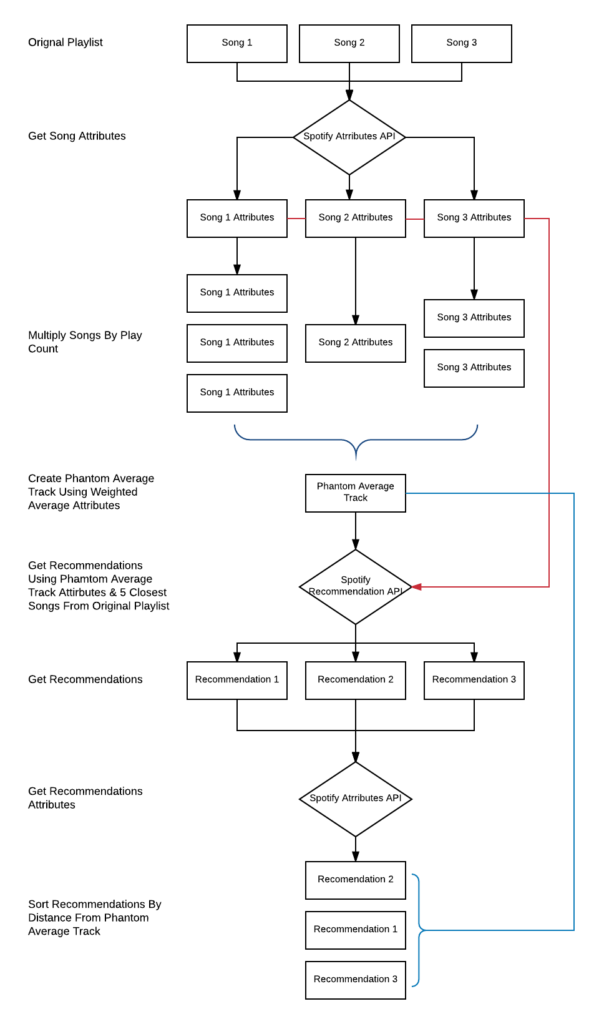 Once the Muse algorithm has completed, users can then click on any recommended song. The chosen song's title and artist name will then be used to query YouTube's API and return and then play the top related video. Users can also click the play button which will play both playlist tracks and recommendations in order by relevance score.

Although this feature is not entirely implemented yet, it is easy to imagine that a form could be put in place that would prompt a user to select a playlist, how many new songs or how many additional minutes of music they are looking for as well as how much variability in the new recommendations they would like and Muse could automatically add the number of recommendations needed to meet the expanded playlist criteria. For example, if the user wanted to add 5 new songs to the playlist that were most similar to the original playlist (by specifying low variability) then with each added recommendation sorted by relevance, the variance of the playlists' attributes would tighten as illustrated below. On the other hand, if a user wanted to add 5 new songs that were similar but not too similar, Muse would add recommendations with lower relevance to the original playlist, which would still approach a low variance minimum for playlist attributes as illustrated below again, but at a slower rate, which in turn would expand the variability of the new playlist's songs. 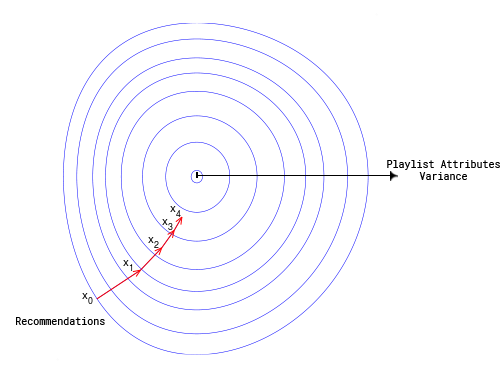 However, a more interesting algorithm than this would be to let Muse run as it is described in the previous flow chart where with the addition of each recommendation, Muse would recompile the playlist's phantom average track based on the playlist that now contains an additional song and add a then fetch potentially completely different recommendations. This process would then continue recursively until an entire playlist with new recommendation was reached with specified duration or threshold level. This can be best visualized using a similar workflow as the one described previously, but with the addition of a final recursive step. 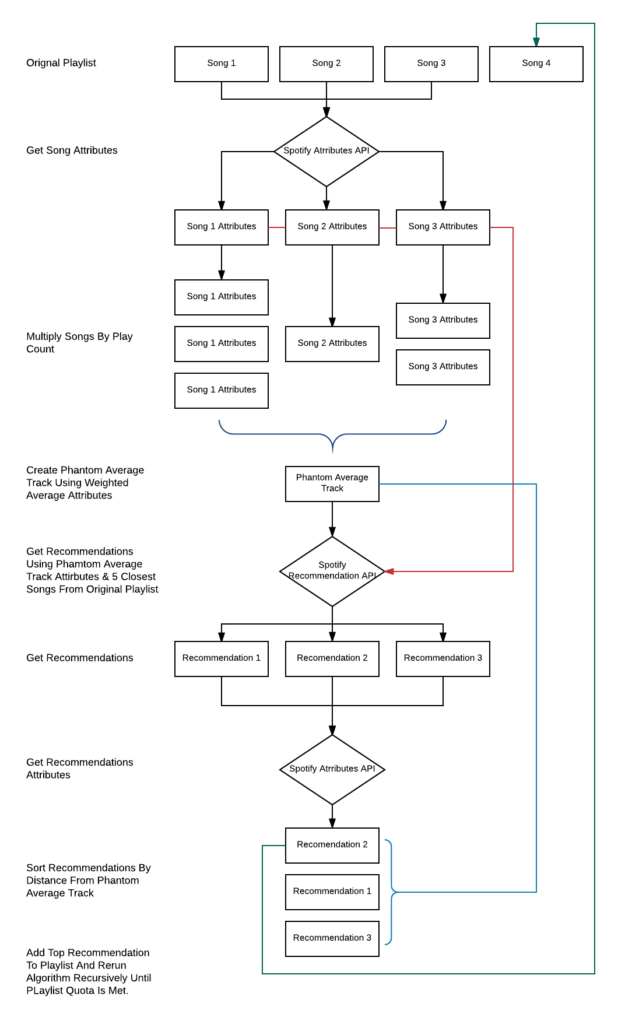 The application of this recursive playlist generation is very interesting for its potential to create varied suggestions through a unique decision path. For example, if the user wanted to to expand a current playlist by 10 songs that were as similar to the original playlist as possible by specifying a low recommendation relevance, then Muse would add the top recommendation with each recursive iteration and approach a playlist attribute variance minimum as fast as possible until the playlist duration or number of intended songs was achieved. 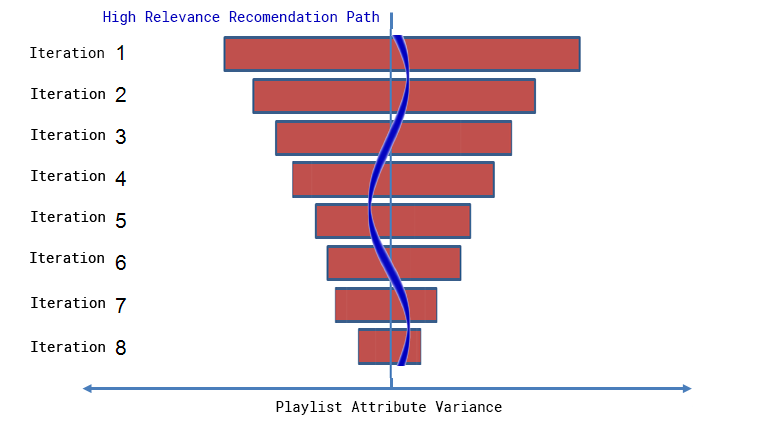 Yet, if a low enough recommendation relevance was set by the user (say 70%), then with each recursive iteration, Muse would add the recommendation with a relevance score closest to 70% which would mean that playlist generation may take a slower, more circuitous route towards the playlist attribute variance minimum. 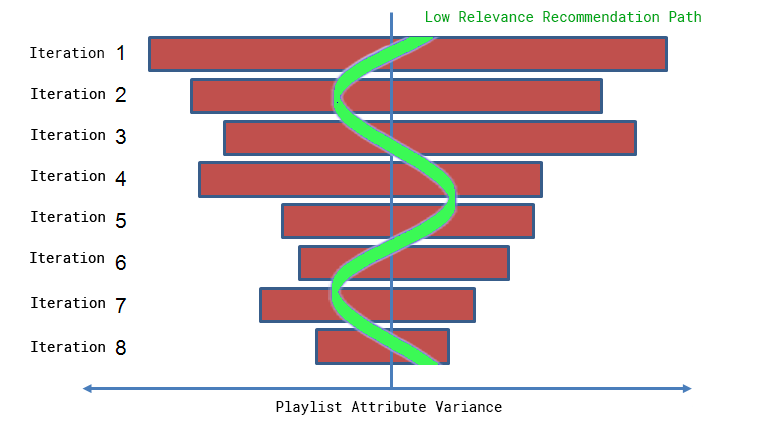 The best way to visualize this process is to imagine falling down a whirlpool. The initial width of whirlpool may be wide, similar to a playlist you may have containing songs with varying attributes, but as you fall further into the whirlpool, its width tightens and the playlist's variance of song attributes approaches a minimum. It is important to note though, that like how a whirlpool twists and turns away from the center as it approaches its minimum, so too does the variability of recommended songs with each recursive step meaning that each added recommendation brings you closer to the bottom of the whirlpool, but may pull you in different directions throughout its descent depending on the variability of the recommendations. Finally, the pace at which you are pulled down the whirlpool creating a tighter playlist variance is defined by the recommendation relevance level initially set in the playlist generation form.

One final unique feature of Muse is that it allows users to create a playlist based of the Billboard Top 100 for any days since Billboard's inception. A user can click on the top bottom left of the screen to change the date and Muse will use Selenium to inject the specified date into this site and then web-scrape the top 100 results to create a new playlist. Muse will then weight these songs by the number of weeks the spent on the charts and find recommended songs that sound like the top hits from that day, but could be from any era.

Google October 25, 2019
Google Wonderful story, reckoned we could combine a couple of unrelated information, nevertheless definitely really worth taking a search, whoa did a single master about Mid East has got extra problerms too.

internet health March 28, 2017
It's really very difficult in this full of activity life to listen news on Television, therefore I simply use internet for that purpose, and obtain the latest news.

masters in education March 27, 2017
An impressive share! I've just forwarded this onto a co-worker who was doing a little homework on this. And he in fact ordered me dinner due to the fact that I discovered it for him... lol. So allow me to reword this.... Thank YOU for the meal!! But yeah, thanx for spending some time to talk about this issue here on your website.

higher education March 26, 2017
I am really pleased to read this website posts which contains lots of valuable facts, thanks for providing these kinds of data.

health advice March 23, 2017
certainly like your web-site however you need to check the spelling on quite a few of your posts. Many of them are rife with spelling problems and I in finding it very bothersome to tell the reality then again I will definitely come again again.