One of the greatest challenges pipeline operators face today is public opinion. One notable event in the recent past is the opposition of the Keystone XL pipeline construction in South Dakota. To mitigate public relations disasters, ensure employee and surrounding communities' safety, and minimize incident related costs, it is vital to implement robust asset reliability systems. These include leak detection systems, predictive maintenance, sophisticated SCADA systems, and computational modeling of corrosion. The purpose of this project is to provide analysis of incident cause, frequency, and associated losses. The development of a SARIMAX model for monthly incident forecasting is also discussed.

Evaluation of Missingness and Data Cleaning

The data that is analyzed in this report is sourced from the Kaggle dataset “Oil Pipeline Accidents, 2010 to Present.”  For a more detailed description of the data, please refer to the appendix section. Figure 1 is a missingness matrix from the msno package. There is a large amount of missingness in the dataset, but after careful evaluation it is all a result of the value being zero or invalid. For integer values, zero was imputed. For datetime variables such as “Restart/Shutdown Time,” the accident date was imputed leading to a time delta of zero.

Figure 3 shows the trends of yearly incidents by cause category. It is evident that the primary cause of pipeline incidents is material/weld/equipment failure. Corrosion and incorrect operation are also significant contributors. These insights solidify the importance of reliability, process safety management, and strict compliance to standard operating procedures. This would suggest the need for more rigid engineering controls preventing operators from by-passing certain safety/interlock features.

This exposes the vital importance of predictive modeling of corrosion to minimize asset losses. Under the assumption that flanges are properly torqued to proper specifications, this may suggest an element of seasonality to connection and equipment failure in general. This will be explored later in the section on time series analysis/modeling.

Figure 6 shows the ratio of losses associated with equipment/corrosion relative to all losses by year.  In the year 2010, 83.4% of total incident losses were attributed to equipment/corrosion cases. On 7-25-2010, the largest net loss within the analyzed time frame occurred in Michigan at an Enbridge Energy asset, resulting in losses of $840,526,118.

Figure 7 shows the relationship between incident cost and the net loss of product in barrels after log base 10 transformation. Performing a simple linear regression between the two variables yielded a R-Squared of 0.110, suggesting that there is little predictive power without any additional aggregation or scaling. One method of future exploration could involve method iteration of robust scaler and cross-validate regression performance by adjusted R-Squared. If expanding the scope of this project would involve building a predictive regression model, the change in crude prices over time would also need to be accounted for.

Figure 8 shows the distribution of net product loss in barrels. The distribution is heavily right skewed and has severe kurtosis. A majority of incidents (2,496) result in net losses beneath 25 barrels, signifying that most incidents are minor.

Figure 9 is a log scale scatter plot showing the relationship of price per hour of downtime resulting from incidents. Performing a simple linear regression yielded a R-Squared value of 0.149, but there is a clear relationship between the two variables. Further aggregation by cause category would likely result in more predictive power from a descriptive MLR model.

The distribution of incident downtime, like other numeric variables explored previously, is right skewed with significant kurtosis as visualized in Figure 10. Most incidents result in less than ten hours of downtime. However, there are a significant number of observations up to 130 hours of downtime.

Figure 11 visualizes the distribution of incidents by region. Intuitively the Gulf Coast region is a high contributor to incident occurrences due to the density of pipeline assets and refining demand, particularly in Texas and Louisiana.

Figure 12 is a visualization of the distribution of natural gas pipelines sourced from the U.S Energy Information Administration [1]. The states in the Midwest also have a very high density pipeline infrastructure meaning that it will naturally have a higher incident rate.

When adjusting regional cost to cost per incident, Alaska has the highest loss relative to incident rate followed by the Rocky Mountain region. This finding is unsurprising given that the top three regions have severe winter seasons that can increase the severity of thermal effects.

Figure 14 shows the top twenty operators with the highest incident rate. There are a lot of major oil companies on the list with very high-volume assets, however there are a few operators that have lower volume throughput with major losses.

According to Figure 15, Mobil Pipe Line Company has the highest loss with incident adjustment. Enbridge Energy Limited Partnership has the second highest adjusted loss. A majority of the operators on the adjusted loss list are smaller capacity operators, but there are still some major Fortune 500 companies such as ExxonMobil and Chevron.

Operators such as ExxonMobil, Enterprise, Marathon, Koch Industries, and Shell have been expanding their data science capabilities significantly in recent years. Unfortunately, the dataset being explored in this study does not account for return on investment for data science implementation.

For accurate time series modeling, the mean needs to be close to zero, otherwise this suggests the presence of bias. Preliminary models demonstrated that the mean of the time series data was non-zero with a high positive kurtosis. To minimize the effects of skew and kurtosis, a boxcox transformation with robust scaler was applied. The optimal lambda for the transformation is 0.20, thus the following transformation is applied:

Multiplicative time series decomposition is a naive method of isolating trend and seasonality from data. This choice of decomposition method was used due to the non-linearity of the data.

Figure 16 is a visualization of the raw monthly time series data. Based on the raw visualization there does not appear to be any apparent trend component at the monthly frequency.

Figure 17 shows the seasonality component of the multiplicative decomposition. The graph shows cyclical increases from January to May and decreases from June to September. This is intuitive given the phenomena of thermal contraction/expansion.

This phenomena can be mitigated with the implementation of a leak detection system so operators are able to target flange/connection maintenance to specific pipeline locations. The leaks may be gradual to the point where they may be undetectable by traditional SCADA systems until it is too late.

In future works, this seasonality effect will be studied on a regional basis to assess if this phenomena is applicable in regions with less severe disparities in seasonal temperature.

The trend component of the decomposition with seasonality noise removed shows a general upward trend. Referring back to Figure 3 which shows the yearly trend of different cause categories, the lower level of granularity shows a small linear contraction in incidents from 2010 to 2012 followed by linear growth from 2012 to 2014.

The residual distribution shown in Figure 19 resembles the shape of the desired gaussian distribution, but there are deviations that appear non-gaussian. To confirm that the distribution is gaussian, the Shapiro test for normality is applied.

One important aspect to selecting the proper forecasting model is determining if the series is stationary or non-stationary. The multiplicative decomposition model suggests that there is a trend and seasonal component to the time series. To corroborate this assumption the Augmented Dickey Fuller test for non-stationarity is applied.

An autocorrelation plot of lag features suggests that there is a high correlation at lags 1 and 2. When tuning model hyperparameters, a grid search range of 0 - 3 for the autoregressive component would be an appropriate start.

Figure 21 shows the predictions of the smoothed moving average model relative to the actual values. The final predicted value differed from the expected result by 0.2. The next evaluation of the model will be the distribution of residuals and autocorrelation of residual lag features.

The residual distribution shown in Figure 22 resembles the shape of a gaussian distribution. The Shapiro test for normality resulted in a p-value of 0.016, meaning the null hypothesis of normality is rejected. More sophisticated methods must be used to meet the normality assumption.

SARIMAX is a variation of ARIMA that contains a seasonal order component. A manual hyperparameter grid search was performed using the method of walk-forward validation for model training. The grid search varies the following variables.

Figure 23 shows the predicted and test values of the model with the lowest RMSE. The SARIMAX model does not appear to fit the shape of the test set as well as the smoothed moving average, but has a 0.3 improvement in terms of RMSE.

The SARIMAX model residual distribution is shown in Figure 24. The Shapiro test of normality yields a p-value of 0.27, meaning that the null hypothesis of normality is accepted. Another benefit of using the SARIMAX method is that it can be continuously trained on new data and supply up to date forecasts.

At the yearly level, the trend in pipeline incidents has increased significantly over the time period of 2010 - 2016. The most frequent causes of pipeline incidents are equipment/weld/material failure, corrosion, and operator error.

A majority of incidents that occur are minor with low downtime, net product loss, and costs beneath $200,000. However, there is a high degree of outlier effect in the cost distribution. Regions with more severe winter conditions have higher costs per incident due to thermal contraction/expansion.

Operators with lower volume capacity assets were more frequent on the top 20 operators in terms of cost per incident. This is likely caused by lower technology SCADA/reliability systems. When selecting a time series model for forecasting monthly equipment failure incidents, the model that minimized RMSE was a SARIMAX model with a seasonal order of (2,0,1,12) with a linear trend component.

Interact with the dashboard here: 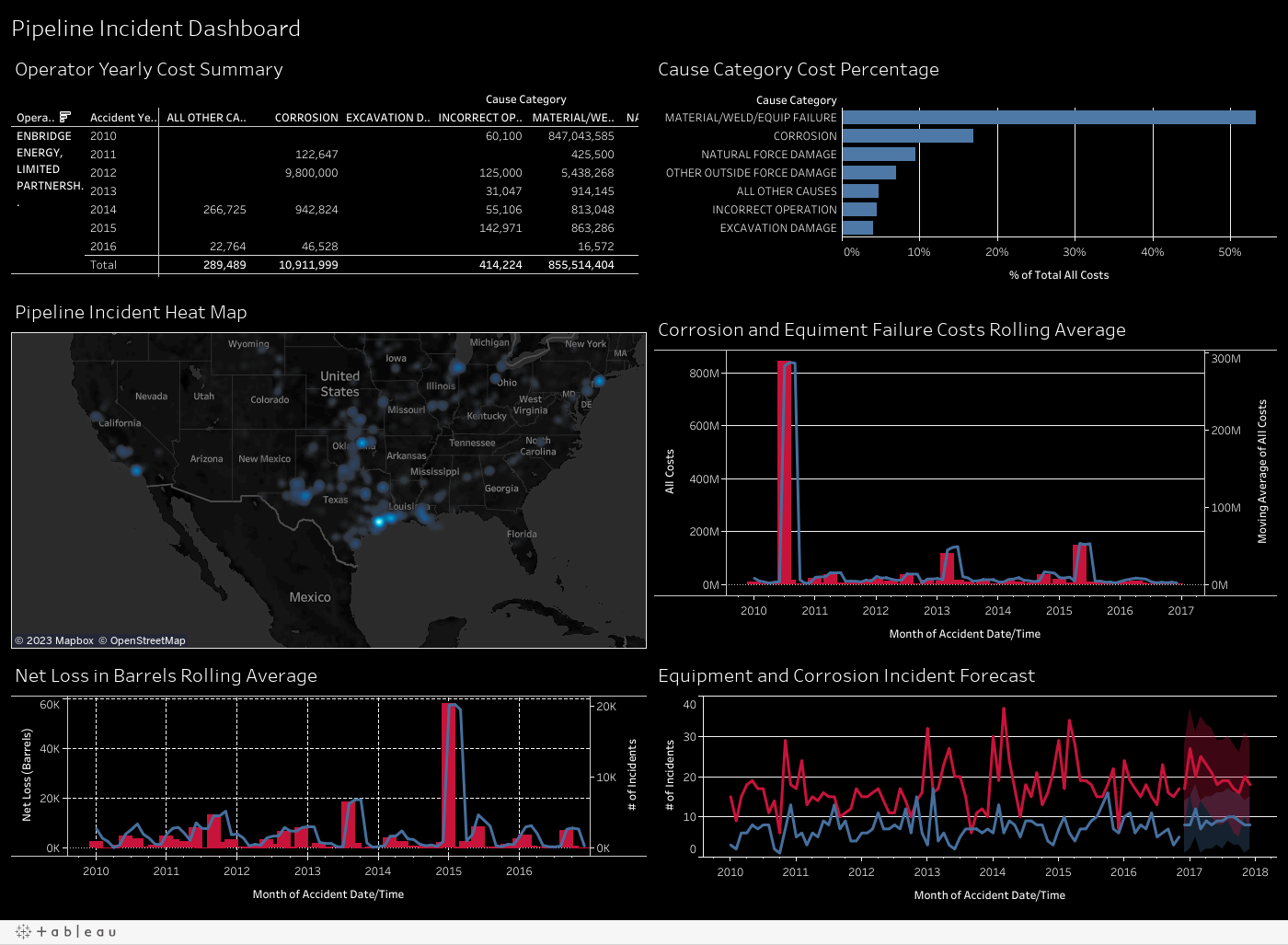