In October 2016, Allstate launched a Kaggle competition challenging competitors to predict the severity of  insurance claims on the basis of 131 different variables. Better understanding the future cost, or severity, of a claim is of utmost importance to an insurance company and would enable Allstate to price their plans more effectively. Additionally, knowing the relative importance of different variables would allow the company to more efficiently evaluate potential customers.

For this competition, we applied various strategies, models, and  algorithms to predict the severity of an insurance claim. As we will discuss, we utilized a variety of supervised machine learning methods, including multiple linear regression, ridge and lasso regression, random forest, gradient boosting machine (GBM) and neural nets. We then used ensembling to combine our models and arrive at more accurate predictions.

One of the challenges within the competition was that the 131 variables provided by Allstate were anonymized, meaning there was no explanation as to what the various columns described. In all, there were 72 binary categorical variables, 43 non-binary categorical variables (with 3 to 326 levels), 14 continuous variables, and one dependent variable, “loss”. The company provided a training dataset with 188,318 rows and a testing dataset with 125,546 rows.

We first visualized the loss variable, which ranged from 0.65 to 125,000. However, the histogram was hard to decipher due to many outliers with high “loss” values. When only plotting the first 95% of the data, we were able to visualize the distribution more clearly, although the underlying data was still heavily skewed to the right.

To remove the skewness, we did a log transformation on the loss variable which normalized the distribution, as seen below. 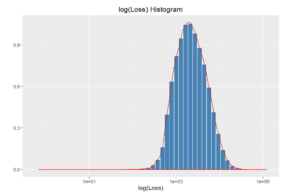 To prepare the data for analysis, we first joined the train and test dataset to account for several levels that appeared in the test.csv dataset, but not in the train.csv dataset. Because of the many levels within the categorical variables, we created dummy columns for each level with binary values of 0 or 1. However, to reduce the number of new columns, we limited the dummy columns to categories that comprised at least 2% of the variable. Lastly, we applied a log transformation to the response column in order to normalize the distribution.

The resulting training dataset had a total of 280 columns consisting of 265 binary variables, the 14 original continuous variables, and the log-transformed loss variable.

To get a sense of our data and obtain a baseline against which to compare our other models, we first ran a multiple linear regression model using the R Caret package. However, we noticed that due to the approach we took in preprocessing our data, the resulting matrix of predictors turned out to be rank deficient. This prompted us to try several linear regression models to address the multicollinearity in the data and the potential problems of matrix invertibility and non-reliability of confidence intervals.

This model resulted in an adjusted R^2 of approximately 0.52, a cross-validation RMSE of 0.51, and a mean absolute error (MAE) score of 1249.45 on the test data set. Inspecting the related diagnostic plots, we were able to ascertain that the errors followed a relatively normal distribution. Similarly, we noticed no distinctive patterns in the scatter plot of the residuals against the fitted values, suggesting that the residuals also had a constant variance. These diagnostics gave us confidence in the validity of the model’s F test, however given the modest accuracy of the predictions resulting from the multiple regression model, we proceeded to investigate further models.

We next ran a ridge regression, cross validating over a grid of a large range for lambda, and then cross validating again on a smaller range.  However, the Ridge model returned a very low lambda value, close to zero in the ten-thousandth place.  This low lambda indicated a near-zero shrinkage penalty, yielding results very close to that of the linear model with all variables included.  The RMSE for this model was 0.507 and a MAE of 1232.

Another stand-alone model that we evaluated for learning to predict the loss variable was gradient boosting. With this method, we tried to get a more accurate model out of an ensemble of random forests by adjusting the following parameters:

We noticed that at interaction depth of 10 and 500 trees, MAE was minimized without overfitting the validation set. Trying an interaction depth greater than ten makes the model overfit early on in the iteration process. The lowest MAE score we achieved with the best tuning parameter was 1161.49.

As we have seen, none of the individual models performed fairly in predicting loss. However, by trying to reduce the MAE of each model, we were able to derive valuable insights. To achieve a better predictive performance, we next proceeded to combine each of these individual models in an ensemble.

To stack our different models, we used the H2O and H2O ensemble packages. Stacking in H2O works by using multiple base learners on the dataset. This original dataset can be referred to as the “level-zero” data. The base learners can be many different algorithms with different parameters for each. Each of these base learners then computes its own predictions using the level-zero data. Column binding these predictions and regressing them onto the original response variable will now be the “level-one” data. Another learning algorithm will then be used on this level-one data to come up with a prediction, which is better than each of the individual models. This last learning algorithm is called the “meta-learner.”

Next, we started adjusting some of the parameters for the base and meta-learners, and adding more base learners of the same type, but featuring different parameter values. In this step, we obtained our best result by using an ensemble that included three GBM models with different numbers of trees, and one customized model for each of the other base learners. This ensemble yielded a MAE of 1125.

Looking back on the experience, one conclusion we reached was that building an ensemble that would reach a high score is as much an art as it is a science, and that parameter tuning is a central part of the enterprise. We also noticed that bigger ensembles tend to score higher, even when including base learners of the same type with identical tuning parameters. For instance, one of our ensembles which included three gradient boosting machine and three neural net base learners with parameters that yielded the best MAE scores among individual GBM and neural net models respectively, and the same ridge regression as a meta-learner, reached a lower MAE score than our best model, even though the GBM and ridge models had the same parameter tunings.

Finally, from our perspective, it looks like the manner in which preprocessing is conducted plays a crucial role in the ability to build a model that is capable of yielding high accuracy predictions.

Cristina is a recent MIT graduate with background in quantitative social science. Over the past five years Cristina has been involved in various experimental and quasi experimental research projects inside academia and as part of program evaluation work...
View all posts by Cristina Andronescu >

Akshay Kumar May 3, 2019
I wonder what's the hardware specs you used to carry out the analysis.