Contributed by Jiaxu Luo. He is currently in the NYC Data Science Academy 12 week full time Data Science Bootcamp program taking place between July 5th to September 23st, 2016.This post is based on his second class project - Shiny Application (due on the 4th week of the program)

This shiny app can be found :https://joshualuo.shinyapps.io/Fortune/

All the code can be found through the link to Github

Do you have any idea how the structure of world economy change over the years? Do you know how the giant companies in the industry you work for evolved and degraded over the years? Which companies in your industry is attracting increasing attention of investors?  My app based on Fortune Global 500 data over the years might give you an opportunity take a fresh look forward.

The Fortune Global 500, is an annual ranking of the top 500 corporations worldwide based on revenue. Every year,the list of companies is compiled and published by Fortune magazine.Since the current form we see today first published in 1995, the Fortune Global 500 has become the definitive study that both examines and defines the world business landscape. For the past decade, the world has witness rapid changes in industries. Benefiting from the technological progress , the process of marketing, integration, industrialization and globalization has been in an in an unprecedented rapid speed.  New economies has been coming up.

Industry structure has been redefined. Giant companies have come and gone. The dataset of Fortune Global 500, which spans from 2006 to 2015 (10 years in total), provides us a glimpse of how turbulent fluctuations were like over the years in the level of countries, industries and companies. The assumption here are those Fortune Global 500 companies joined into global competition and therefore the comparative market value fluctuation each year reflects the change of global business landscape.

Thanks to Financial Times--an English-language international daily newspaper specializing in business and economic news ,the dataset of Fortune Global 500 each year is freely accessible ( http://topforeignstocks.com/downloads/ )

Company: Name of a Fortune Global 500 company
Country:  The country the the company registered
Market.value..m: The revenue of the company by year (unit: million dollars)
Sector: The industry the company belongs to
P.e.ratio:  An indicator to reflect the prospect of a company for higher growth by investors
Year: The year that the the company was included in the list

The first tab of the application allows users to explore the geographical distribution  of Fortune Global 500 companies of an industry in a country level in a specified year. The assumption here is that the number of Fortune Global 500 companies fluctuations reflect the growth status of industry in the specific country. The following  example demonstrates how to draw insight from this tab.  Here we specify banking industry and explore year 2006 and 2012 respectively.
At the first graph, we would see back in 2006, the banking industry was most prosperous in North America, contributed by Canada and US. However, when time came into 2012, we can see  more Asian countries were playing an  important role, especially those countries around Asian-pacific area, including China, Malaysia,Indonesia,Thailand,etc. The finding surprisingly match the reality that the the rise of Asian-pacific economies has been challenging the once dominant role of North America. We also see India and Brazil's banking industry growed rapidly. It's no wonder they are among BRICS countries. 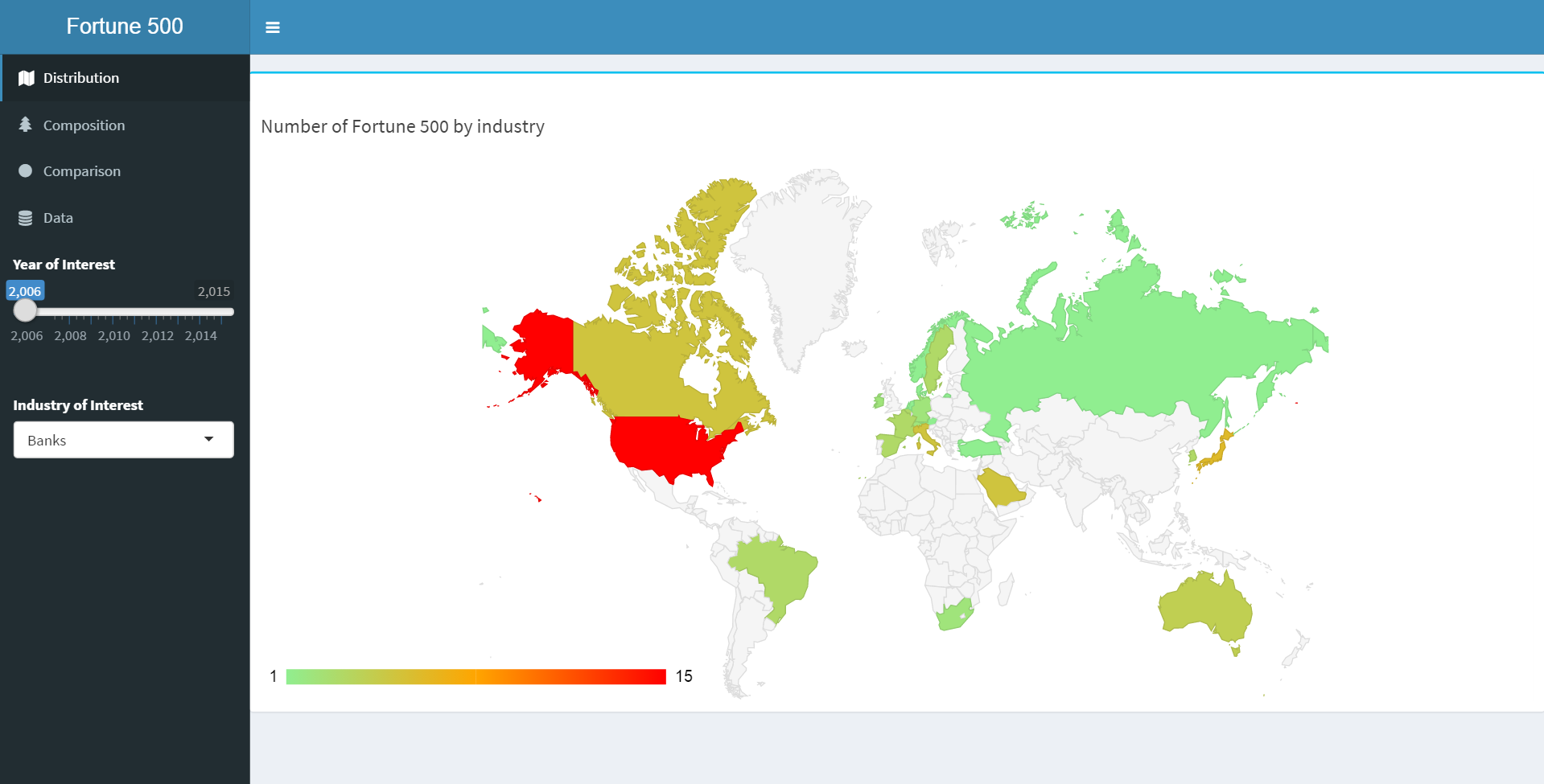 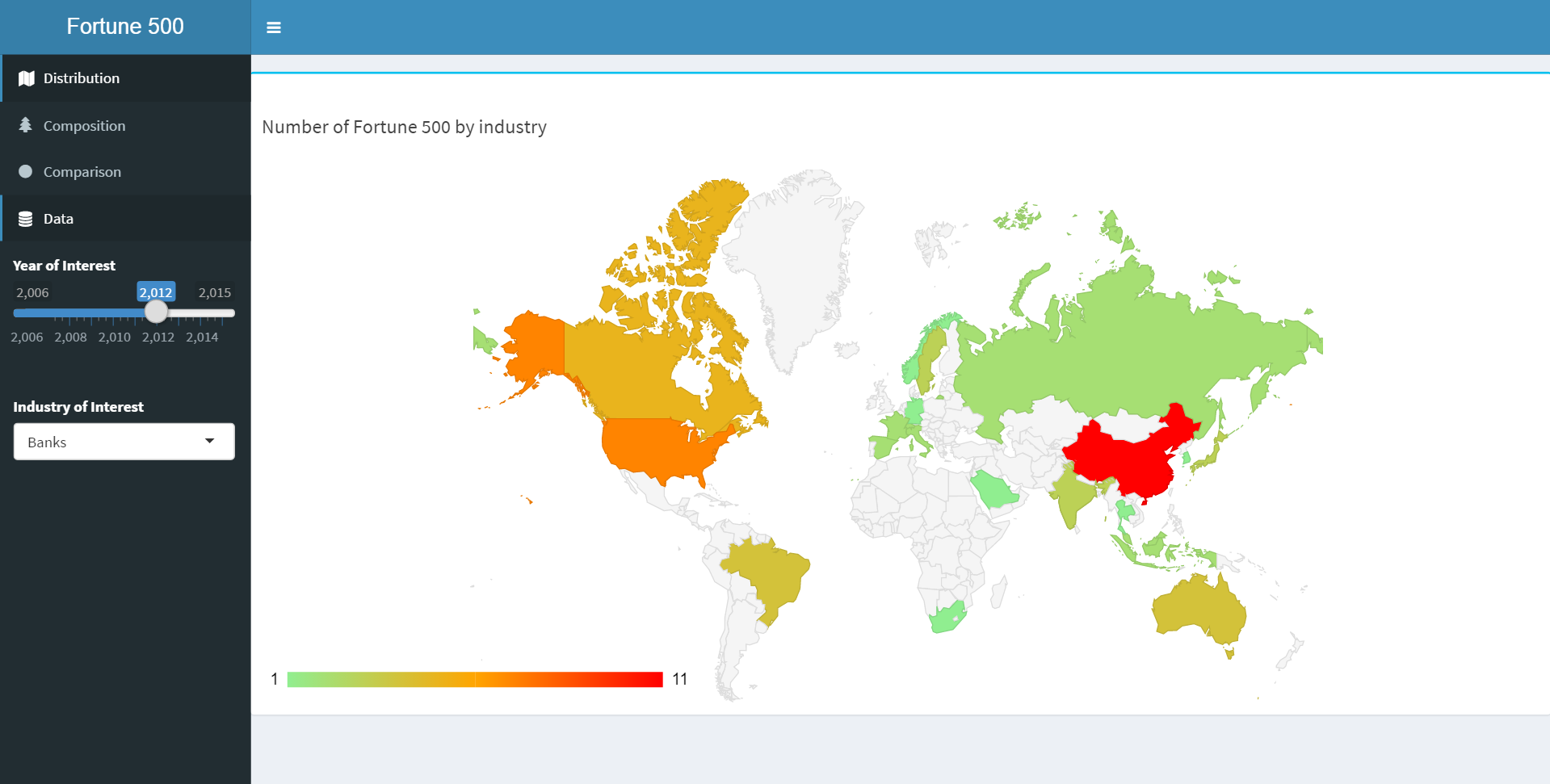 Composition of an industry

The second tab of the application allows users to explore the composition of market value of an industry year by year. The assumption here is the fluctuations of order of composition by market value reflect the general trend of industry evolution and degradation. The darker the rectangle, or larger the rectangle, the higher the market value of that industry as compared with others'.
The following  example demonstrates how to draw insight from this tab.Here users are allowed to specify a year of interest and get a glimpse of what the business landscape looked like in the year. From 2007 to 2014, we noticed the software industry, which was once no match for hardware industry, had been gaining momentum and finally surpassed the hardware industry in the composition of market value, indicating the higher acceleration of growth of software industry than hardware industry over the years. If you are interested in deeper exploration of the countries that contribute to the industry most, click the rectangle to see what they are. 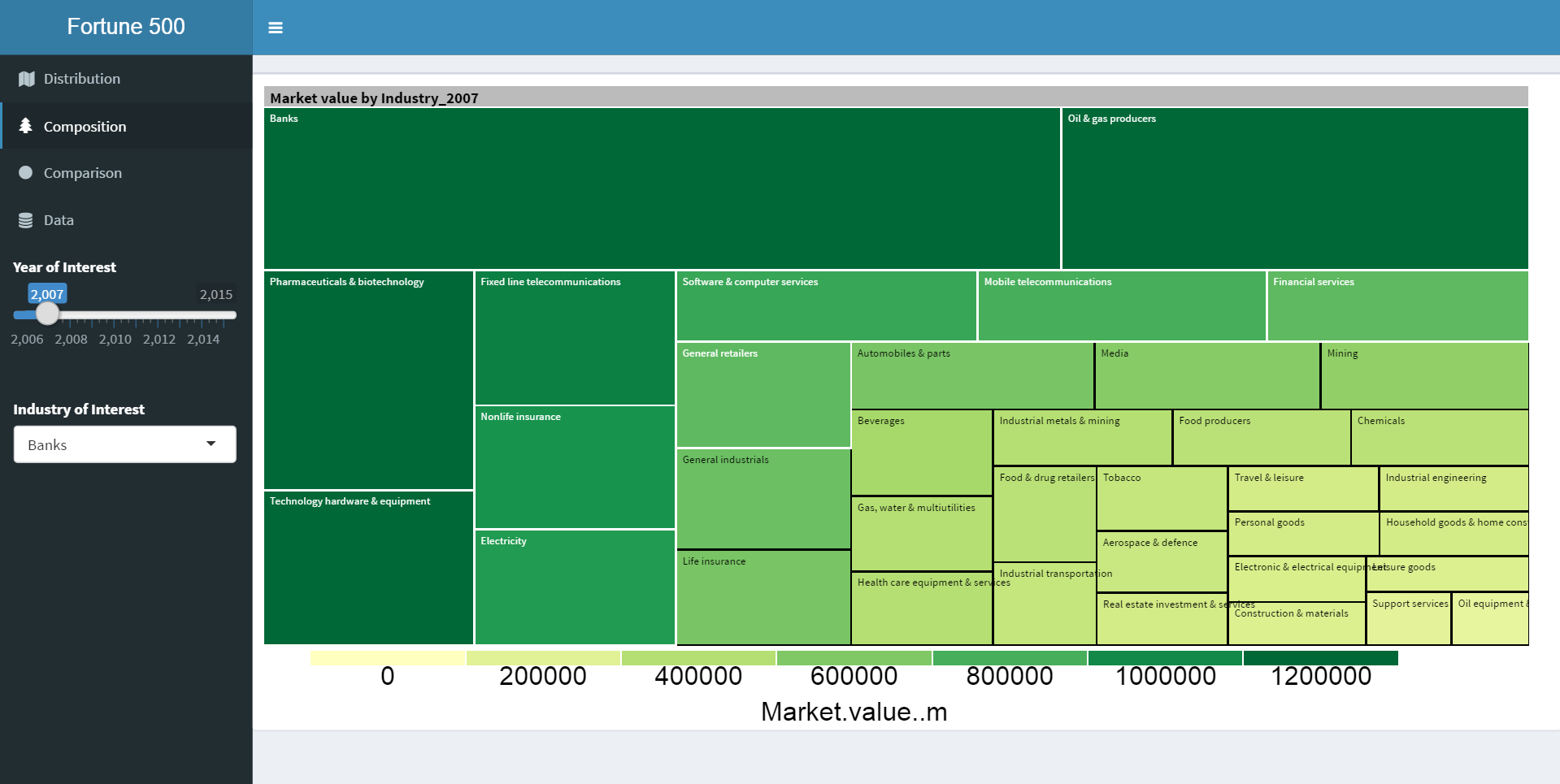 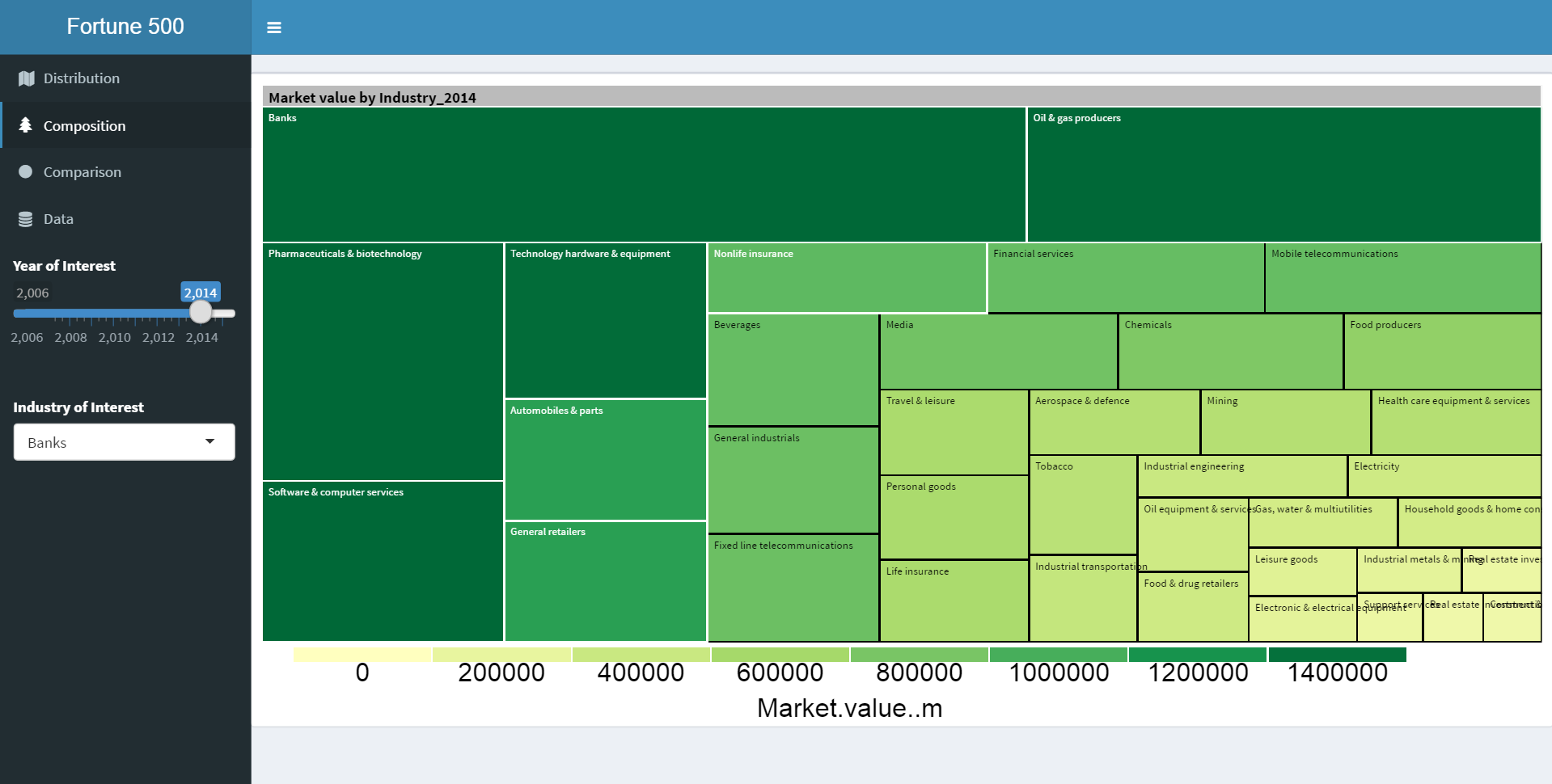 The third tab of the application allows users to explore the market value and P/E ratio between companies. On the left hand side of the output is the bubble chart, where the size of the bubble represents the market value of a company in a particular year.The color gradient also facilitates the identification of the rank orders. On the right hand side is the bar chart of P/E ratio in descending order. P/E ratio indicate the value a company for investment. The higher the P/E ratio, the higher growth speed you could expect.
The following is an example to demonstrate the insight got from this tab. Back in 2006, when "Apple" was still called "Apple Computer", Cisco and Intel were leading the industry. It is worth noticing that in 2008, Apple's P/E ratio jumped to the highest, probably due to the launch of iphone - a revolutionized product at the time. Apple has been keeping its competitive advantage  since that time and by 2015, it has become a dominating and unrivaled giant in the industry. 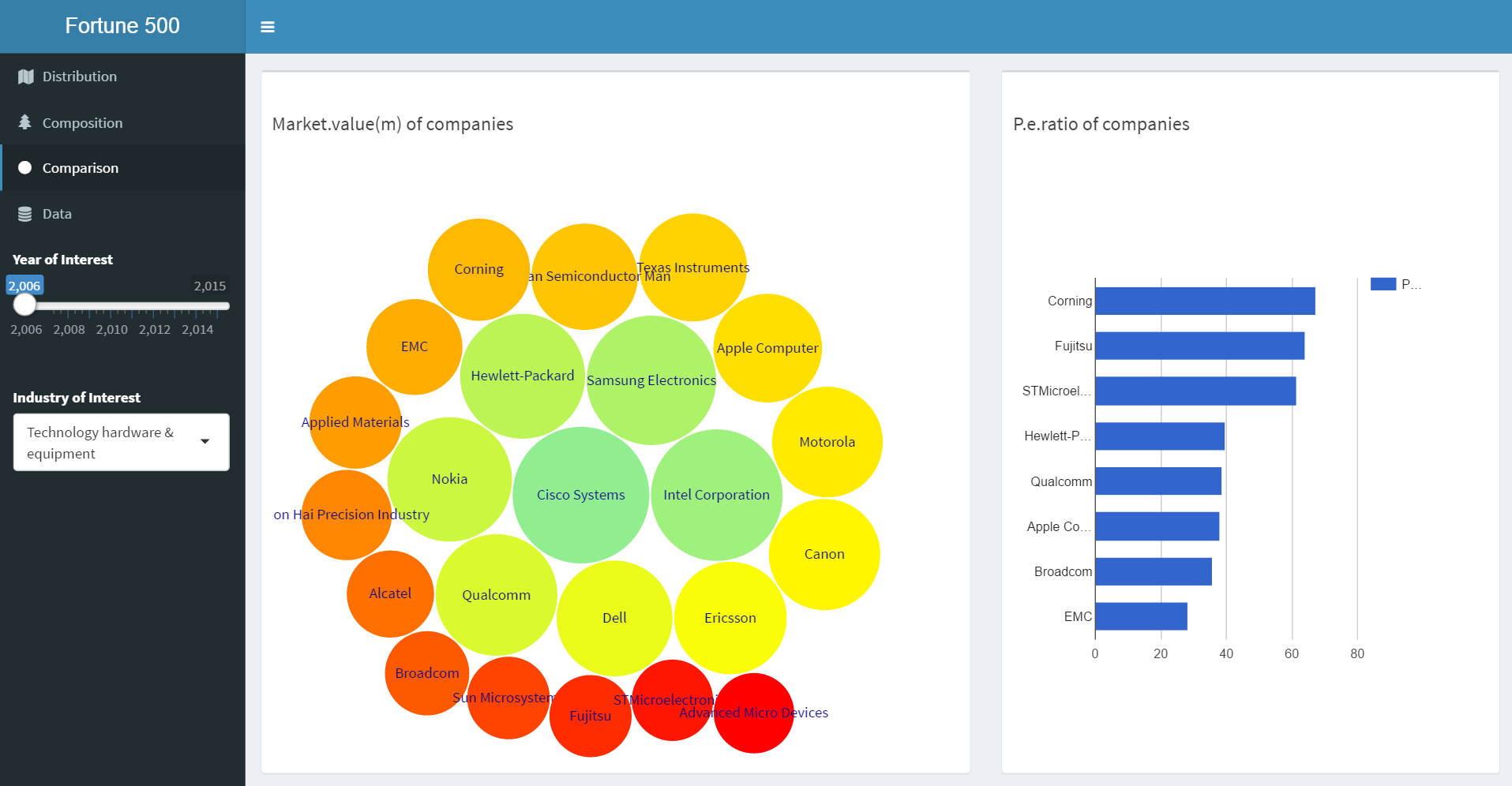 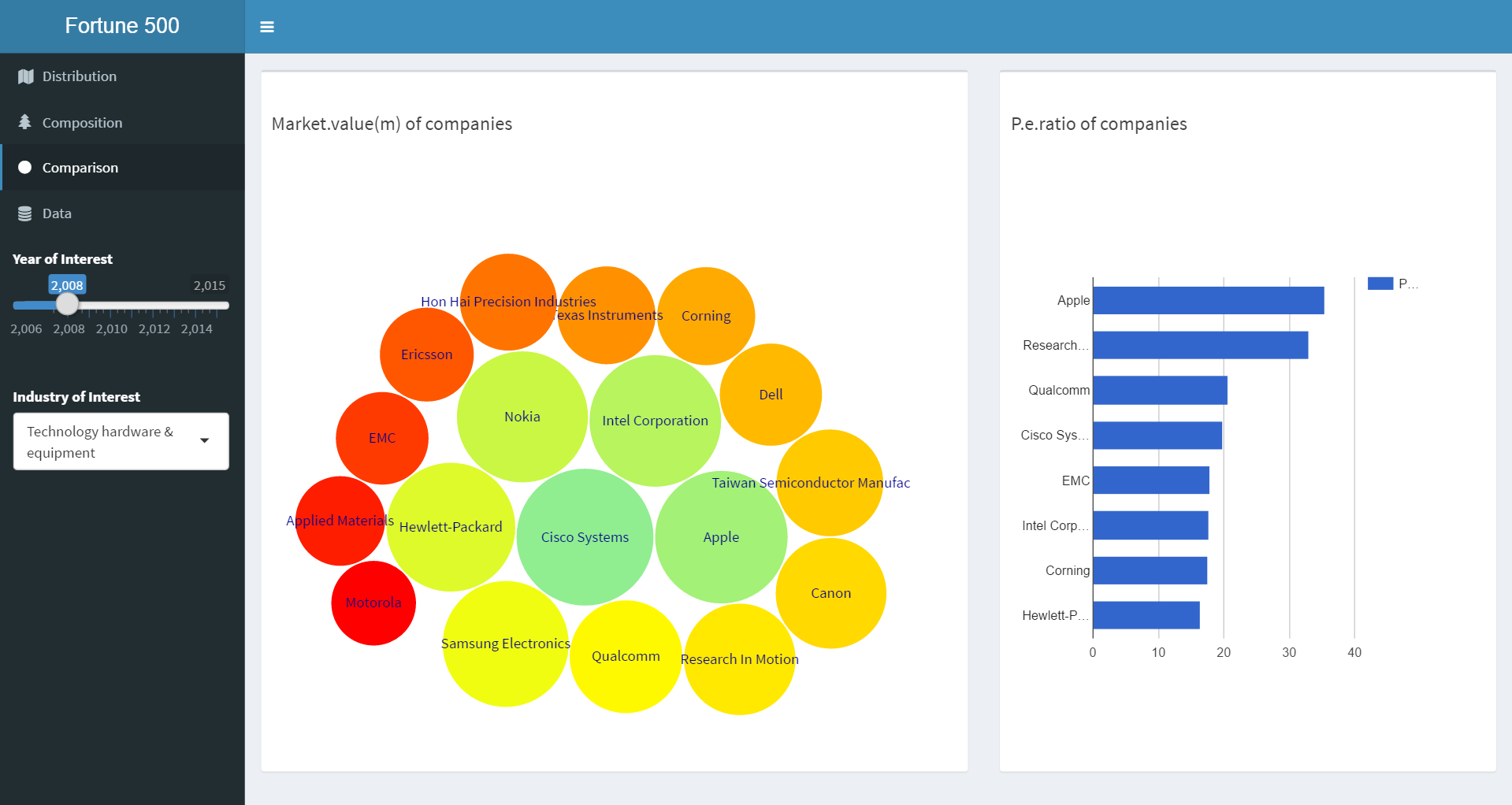 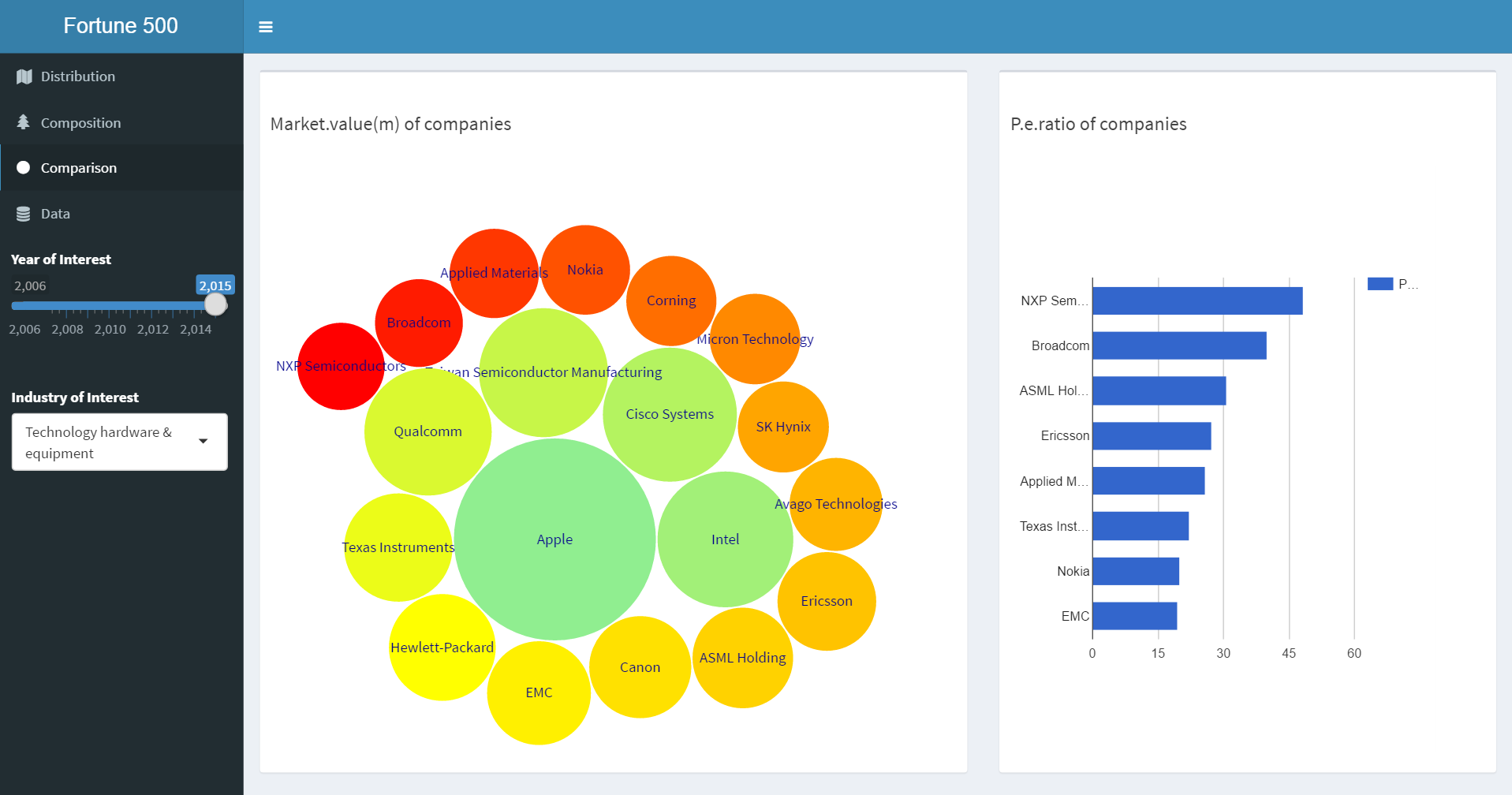 The Data tab allows users to search for a company list ranking by Global rank in ascending order by specifying a combination of year and industry of interest. The users can also use the search box to identify the information they want to see more quickly.

Hopefully, this shiny app would help you to explore the shift of industries  among countries, the ups and downs of industries in the global economies, and substitution of big companies by their challengers. To some degree, it helps  you to get a glimpse of how rapidly our world has been changing. There are rich stories awaited for you to explore.