This project is about the current education status around the world. It gives an insight to the global literacy and illiteracy rates, country wise - literacy growth and gender parity in education, change in the GDP percentage spending on education and also tells us about the countries that have scored high and low on PISA Science scores.

I believe that education is a necessity to meet our basic needs to survive. I had the chance to interact with individuals who didn’t have the opportunity to go to school either due to monetary reasons or either they were made to believe that being a woman, they were solely responsible for the household chores. Adults in developing countries are unable to go to school mainly due to poverty or ill health or poor nutrition or displacement from war and conflict.  In most cases, women in developing countries had no access to education either because of the patriarchy society or either because of the political situation there. If only women in these poorer countries had access to basic education, they would be able to support themselves and also contribute towards their family and most of all, not be exploited.

I was aware that UNESCO (United Nations Educational, Scientific and Cultural Organization) was at the forefront of global literacy efforts, helping communities with –

With this thought in mind, I was curious to learn about the developments in literacy across well developed, developing and poorer countries. I wanted to learn which of these countries were still struggling with gender parity in education.

I looked for a dataset which had consistent data year wise on world literacy and illiteracy rates, country wise and year wise - literacy rate, gender disparity, percent of GDP spend on education and their respective PISA scores. However, this information was not available in one dataset. On researching, I was able to find separate datasets for each of the parameters. But the problem was that the years among the datasets were not consistent for all the variables. To this, I decided to keep them separate for my analysis.

For this project, I used R studio for data preprocessing and visualization. Later, I used the Shiny app to host the visualization.

The app is user friendly in communicating the insights with different kinds of graphs. Here is a screenshot of the homepage of the Shiny app – 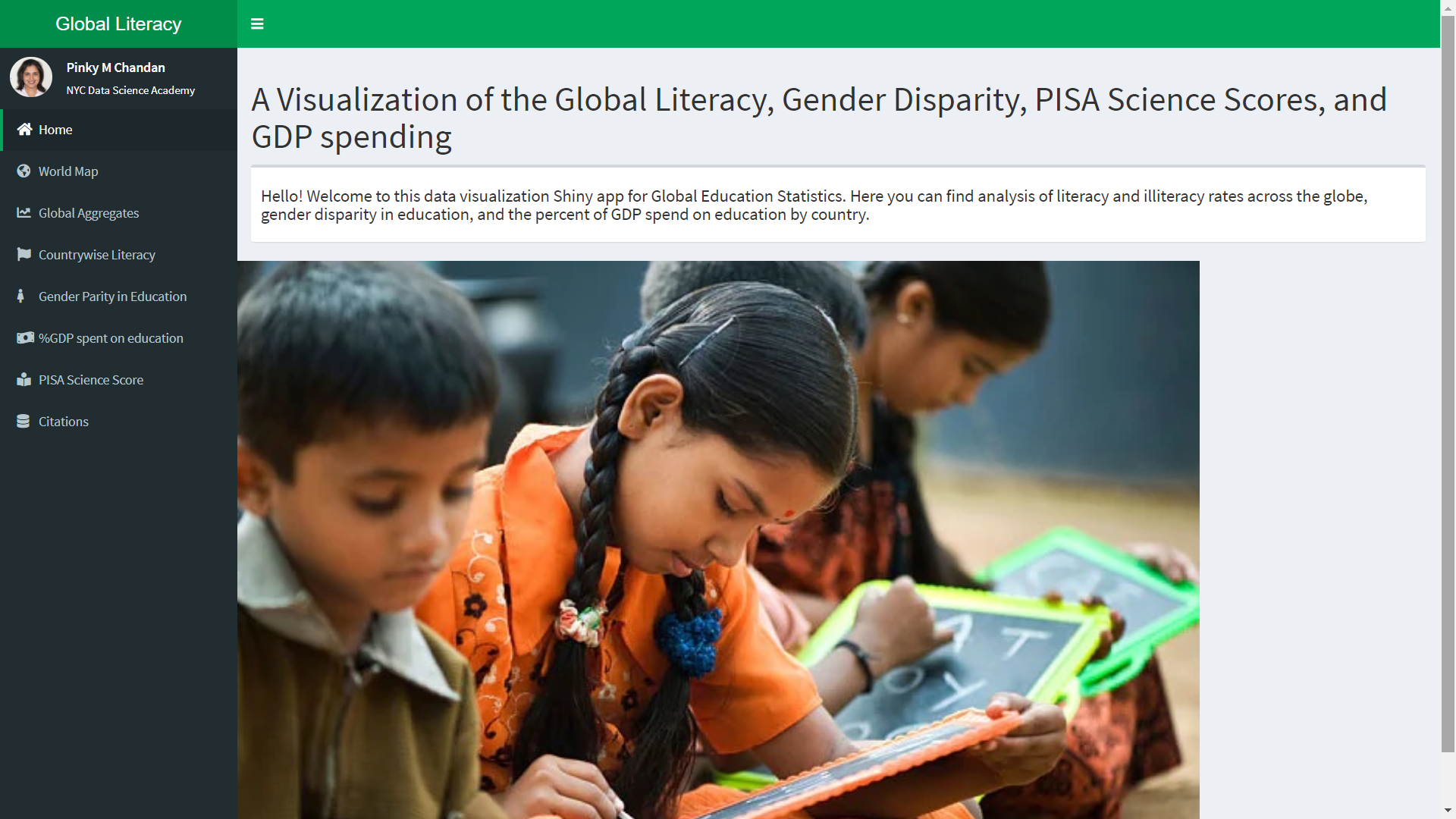 On clicking on the world map (made by using google GeoChart), the app displays an interactive map which on hovering gives the most recent literacy rates for each country. The next menu item on the left side bar is the world aggregates. It displays the stacked area charts of overall world literacy and illiteracy rates using ggplot. This page also has the percentage of the top literate and illiterate countries in a bar charts for the recent year.

The fourth menu item - Country wise literacy provides a drop down to select the country for viewing the development of literacy rates over the years. The fifth menu item is about gender parity in education. On selecting a country, the line chart for female and male literacy rates are shown. These line charts are made using googleVis.

The sixth menu item is about the percent change in spending of GDP on education from the year 2005 to 2015. This interactive bar chart is coded with googleVis bar chart.

The seventh menu item is about PISA Science scores. PISA is a program for international student assessment by OECD( http://www.oecd.org/pisa/aboutpisa/). This page displays a bar chart with the top 10 countries that were able to score high and low in Science.

What did we find using the app?

The world map shown below displays that illiteracy is still a problem in sub Saharan Africa and parts of South Asia where literacy rates are below 50%.

Among the bottom literate countries, the literacy rate for 15 year old individuals in Niger was the lowest. Niger also had the highest gender disparity. In Niger, women do not have access to education. South Sudan also has a low literacy rate of 32%. It also portrays a huge education gap between men and women. There are huge differences in education between the sub Saharan African countries and the rest of the world. 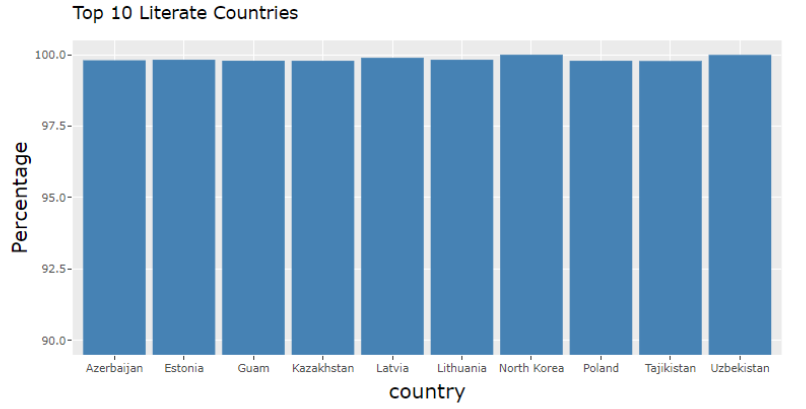 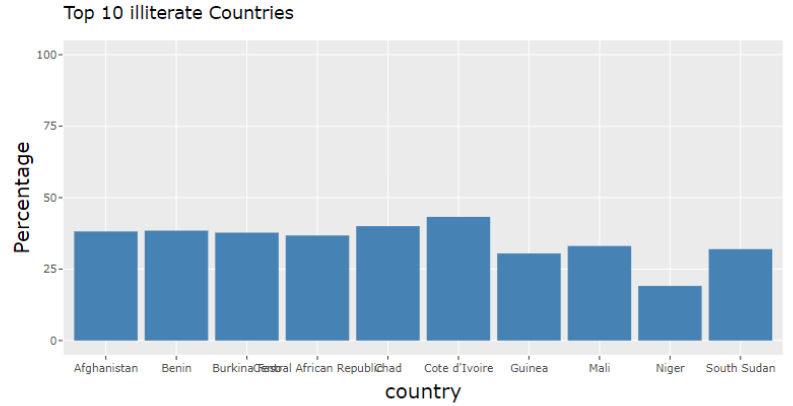 The overall literacy rate of young women is lower than the literacy rate of young men. But Singapore has done a great investment in overcoming the gender parity. Men and women have equal access to education. This also reflects from Singapore’s PISA scores, it has the highest PISA score of 556. Mexico has also made good progress to overcome the gender disparity in education.

Slovak Republic, Poland and South Korea are among the top 3 countries to have increased their percentage of GDP spending on education from 2005 to 2015. To my surprise, United States has only increased its GDP investment on education by 4 percent. 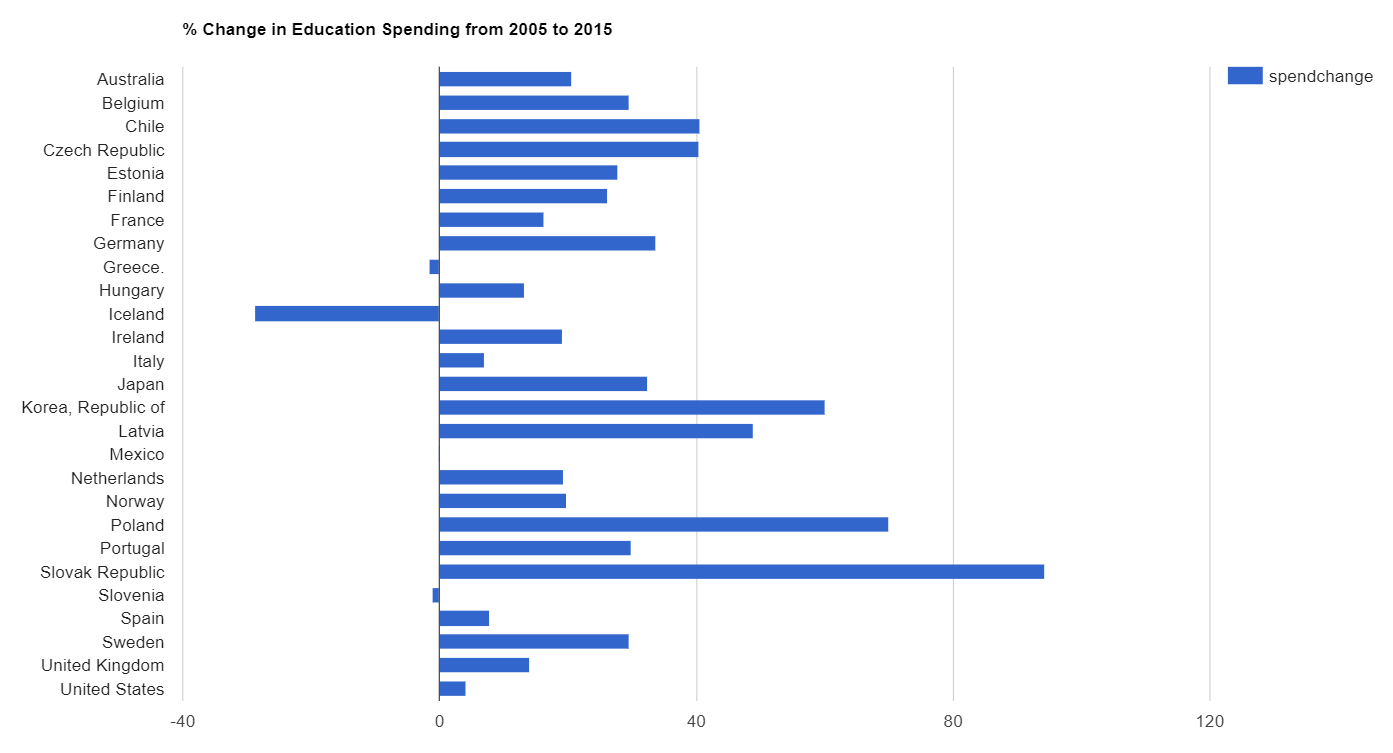 Japan is the second highest after Singapore in PISA Science scores with 538. Dominican Republic and Brazil scored the lowest on PISA among the countries that participated. 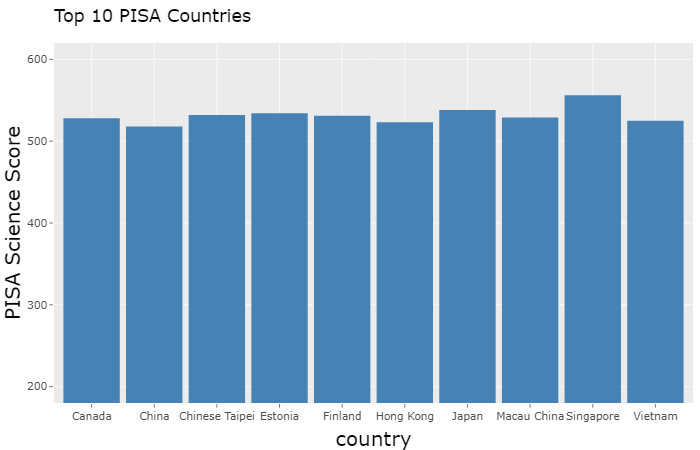 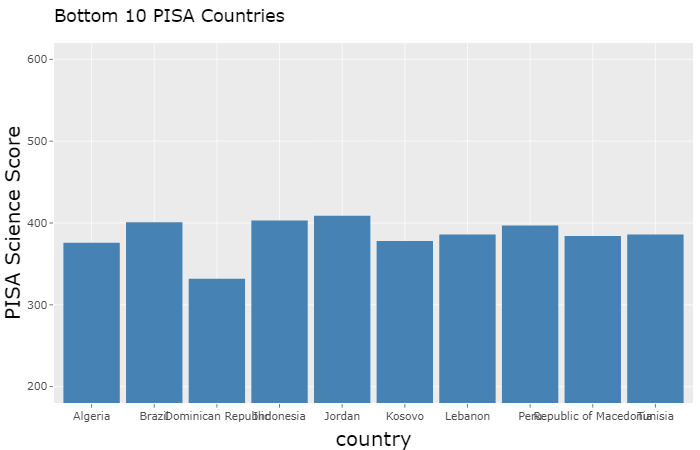 In the future, I would like to add to my analysis by studying the generational literacy gaps across countries. Adding visualization on PISA Maths and Reading scores.

Thank you for taking time to read my blog.

My shiny app can be accessed at https://pinky-shiny.shinyapps.io/world-literacy/

View all posts by Pinky Chandan >