There is a lot of talk about the amount of energy US imports, while scarce attention is paid to how much it produces.  Not only did  the US generate 4 trillion kilowatt hours in 2015, but in terms of global warming, the US is producing an increasing amount of renewable energy.

About 67% of the electricity generated in the US is from fossil fuels (coal, natural gas, and petroleum). The fossil fuels are nonrenewable sources, which are limited in supply and will one day be depleted. Burning fossil fuels creates carbon dioxide, the number one greenhouse gas contributing to global warming. The remaining 23% of electricity is generated from renewable energy sources. Sun, wind and water are perfect renewable energy sources depending on where you are. They are non-polluting, renewable and efficient. With the development of technology, the energy conversion efficiency of solar photovoltaic, is increasing dramatically and the cost for generating every kilowatt-hours is decreasing. 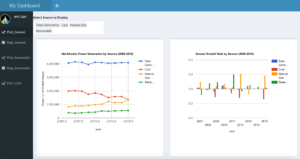 When you click “Map_General”, the left map shows the rank of states in the use of different resources for generating electricity. The right pie chart shows the percentage of  each energy source used. (In the “Plot_General” and “Map_General”, renewable energy sources are combined into one variable.) 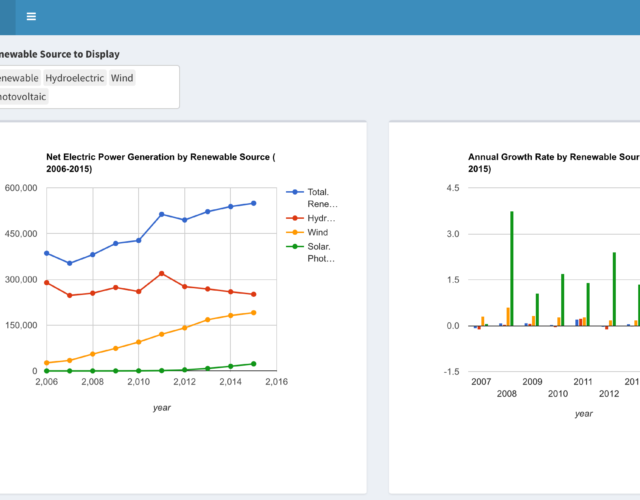 The left “Map_renewable” plots show the rank of states in the use of renewable resources, and the right pie chart shows the percentage of  each renewable energy source used.

Just as plants are built, so they are retired over time.  The “Plot_Units” shows the count of retired plans as well as the addition of new electricity plants projected to 2023.  This reveals the future focus of sources of electricity production. 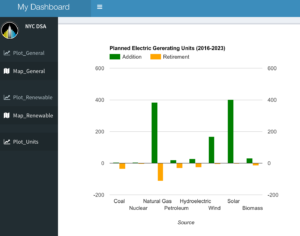 What do we find by using the App?

In Washington state, 82% of electricity is supplied by renewable energy, with hydroelectricity the leader at 90%. Washington state illustrates how natural resources are able to supply more than 70% of human’s needs in certain natural environments.

With its large population and high tech culture, California demonstrates another mode of using energy resources for electricity generation. California ranks number one in using solar energy for electricity. About 25% of total renewable electricity is from solar photovoltaic.

From 2016 to 2023, there will be 112 natural gas units, 36 coal units and 31 petroleum units retired in U.S.. The planned additions are 402 solar photovoltaic units, 384 natural gas units and 169 wind power units. In the near future, natural gas will dominate as a source for electricity. However, the share of renewable energy keeps raising.  For some states, like Washington state, renewable energy already can supply above 70% of its electricity needs. The portion of solar energy will dramatically increase. The reliance of humans on fossil fuel will continue to decrease.