According to Tennis Industry Association, there are 17.9 million players playing the sport of tennis in the US and an additional 14 million Americans, while not current players, express an  interest in the sport. This phenomenon of growing participation and interest in the sport not just limited to Americans, but worldwide. The number one crowdfunding site for sports, PledgeSports, has listed Tennis at Number 6 as the most popular sport in the world. The continued participation and interest naturally leads to following of the professional sport, and more specifically, the main events, namely, the Grand Slams. At the writing of this post, the top trending stories in sports is:

To that end,  I build an interactive webapp that focuses on the prize money awarded in singles events across Grand Slams.

As an avid player of the sport, I was interested in knowing what the numbers are when athletes compete for the biggest prize and how has that changed over the years. In addition, in recent, a topic of discussion in sports has revolved around equal pay. It is of interest to see how the prizes have evolved across the Men and Women events of the sport.

This webapp was developed in R Shiny, an R package that makes it easy to visualize analytical findings and allow interactive use of the dashboard. The code can be found in this github repo. This dataset was acquired from https://github.com/popovichN/grand-slam-prize-money and it consists of men's and women's singles winners' prize money for each Grand Slam from 1968 to 2015. For the Australian Open, data is provided since 1971; two tournaments were held in 1977, but no women's prize money data is available for that year; and no tournament was held in 1986. Prize money is noted in local denominations: US Open (USD), Australian Open (AUD), Roland Garros (FRF through 2001, EUR since 2002), Wimbeldon (GBP).

The top row on the dashboard is a composition of info boxes that provide static information of some important stats from the dataset including the value of the biggest prize money ($3.3 million). 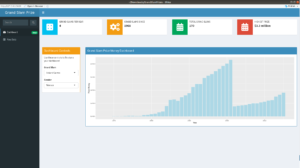 In order to truly find and contrast the prize money across grand slams over the years, it would be useful to have a historical currency exchange rates that could provide a uniform reporting value for each award. Since the current awards are reported in local currencies, additional data is needed for consistent analysis. Moreover, a correlation can be made with award winners to determine which athletes have topped the list of earning in grand slam awards.

Ihsan is an NYC Data Science Academy Fellow currently pursuing his PhD in Computer Engineering from Purdue University with a dissertation on analyzing patterns of learner behaviors in MOOCs. He has a passion for building dashboards and interfaces...
View all posts by Muhammad Ihsanulhaq Sarfraz >