Motivation: Many of my friends and family members regularly use citibike as an eco-friendly, active way of getting around New York City.  Though they enjoy the service, I often hear them complain that there are no bikes where they want them and too many bikes where they don't want them.  I sought to understand user patterns and bike distribution across the many citibike docks scattered throughout the city.

Data: Citibike has released downloadable trip histories for every month of their service since July of 2013.  I pulled the dataset for just last month (June, 2016), which contains the following (n = 1,460,318):

First I wanted to understand general citibike usage by time of day.  To do this, I decided to count the total number of citibike trips started for each hour of the day and plot my results on a bar chart.  (initial data manipulation code at the end of the post) 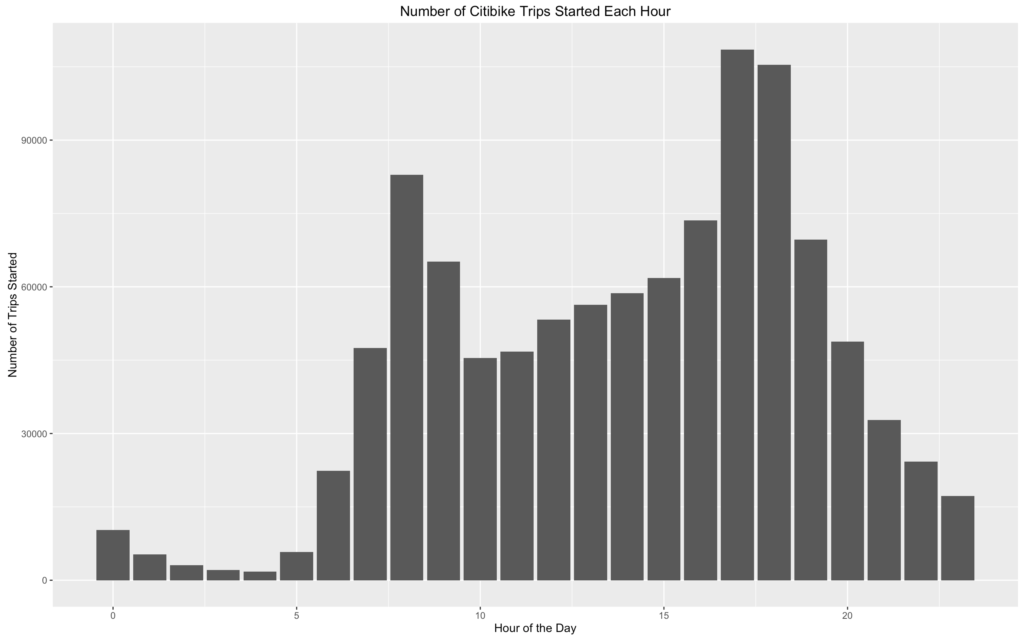 One can see that citibike is very clearly a commuter tool, as the bar chart peaks during morning and evening rush hours.

Because citibike usage is highest during rush hours, it seemed important to distinguish weekday and weekend usage.  Separating all trips by weekday starts and weekend starts and plotting hourly usage on a bar chart gave the following two graphs. 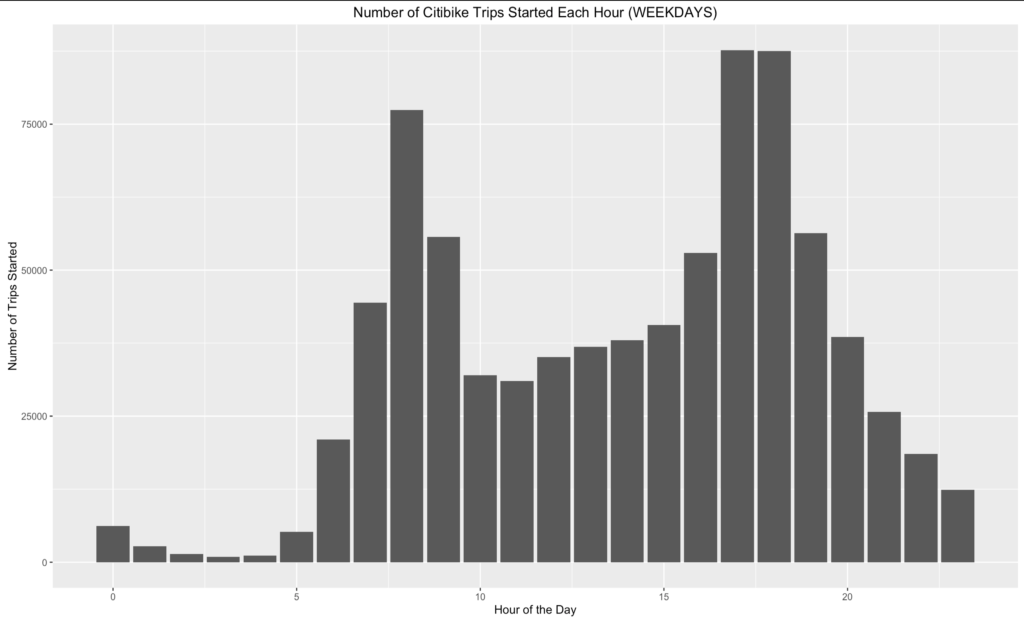 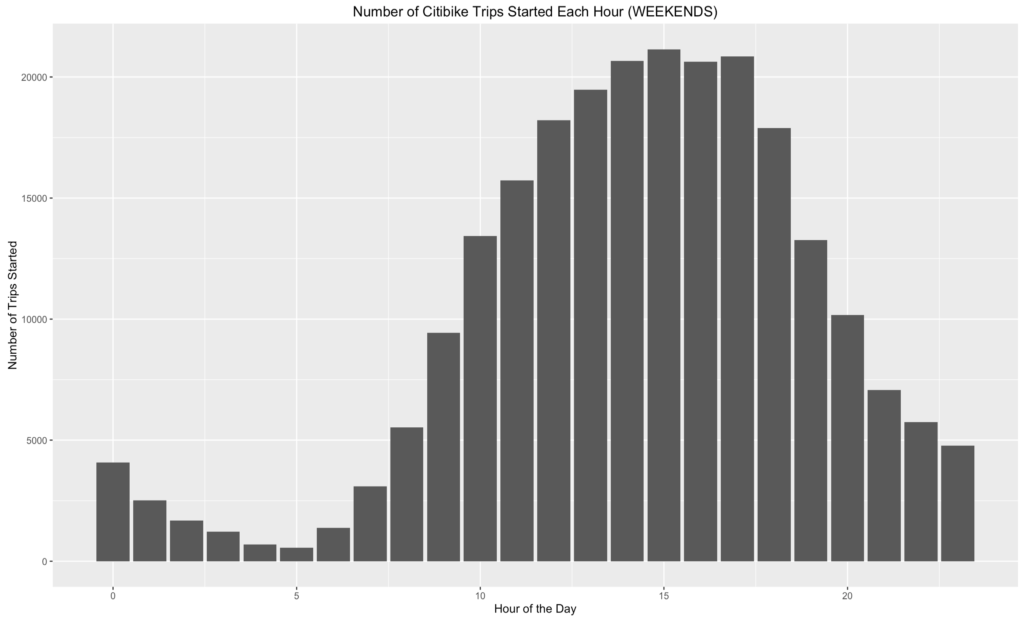 Not surprisingly, user patterns are very different on weekdays and weekends.  Interested in potential directional flow problems caused by commuters using citibike, I decided to proceed with just weekday data.

In order to visualize activity at individual stations as well as across the city as a whole, I wrote two functions to generate maps of station usage across specified time periods.

maps_ratio(x, y): creates a map that shows, between hours x and y, the ratio of trips that started and trips that ended at each dock.  Each station is represented by a dot, and the positivity of its trips started:ended ratio is represented by dot color and size.  Maps_ratio also prints the top 5 stations with the highest ratio, as well as the median ratio. (code at the end of the post)

I first wanted to get a sense of station activity in general (not broken down by hour) to understand which stations experienced heavy (start) usage and which had extreme trips started:ended ratios. 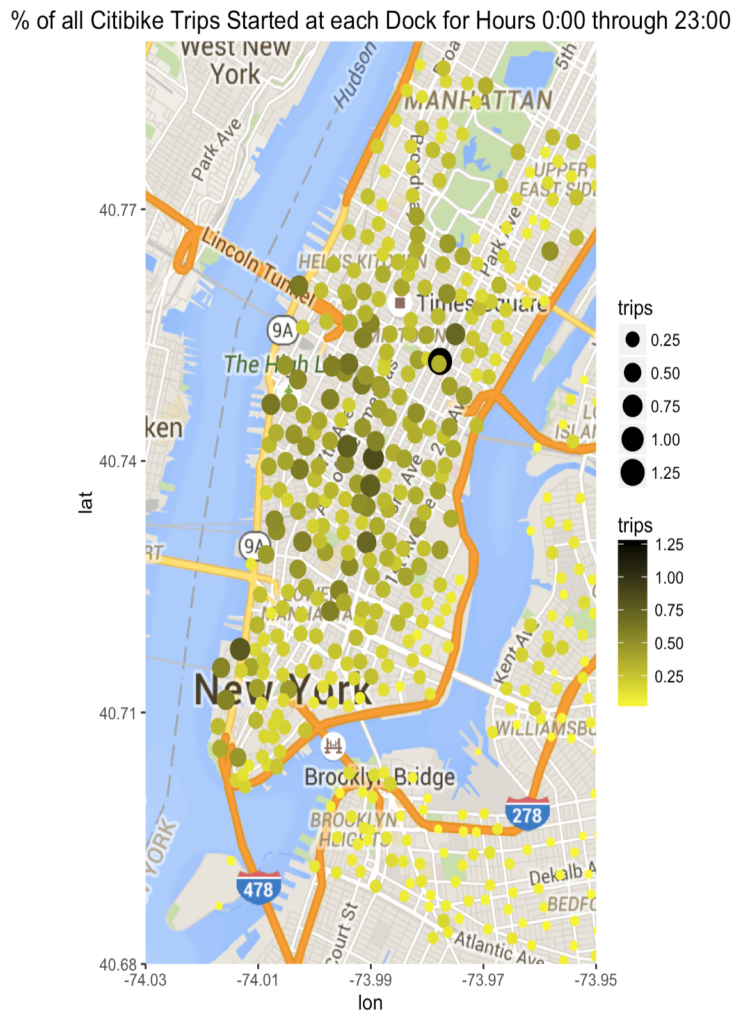 According to this graph, more citibike trips start in commercial, downtown Manhattan than in residential neighborhoods such as the Upper East and West Sides, alphabet city, and Brooklyn. 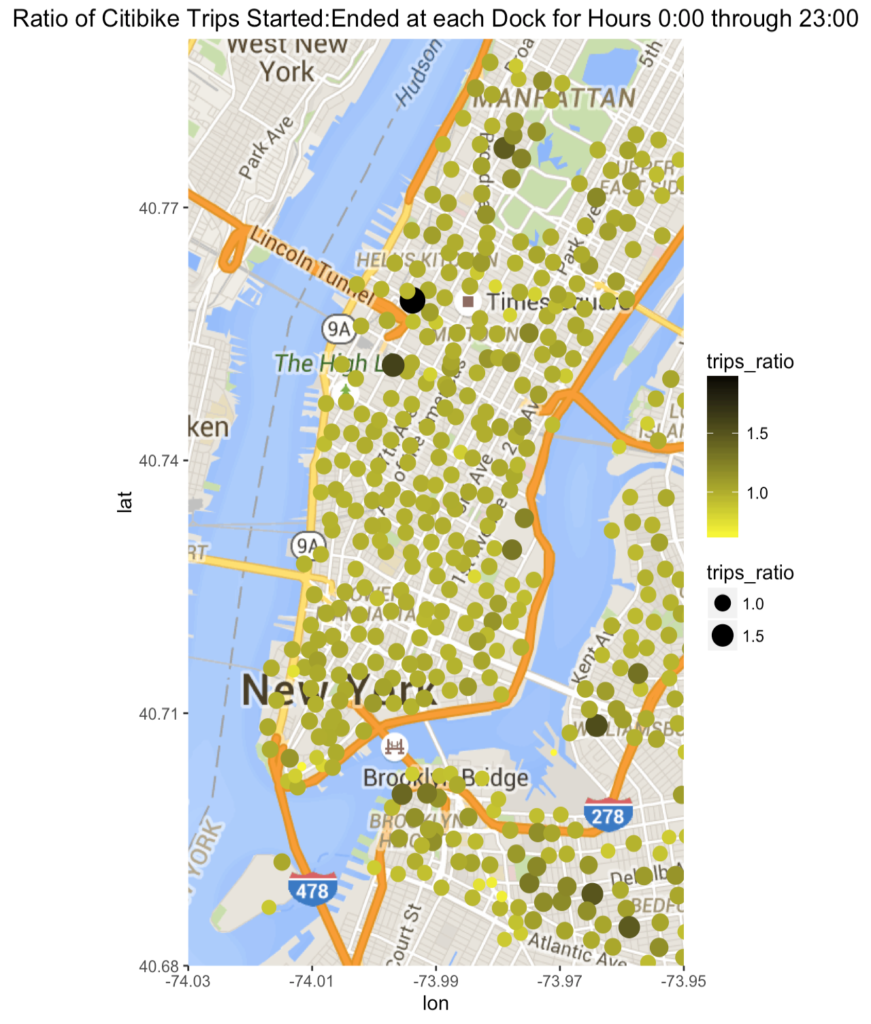 According to this graph, most stations generally have similar flow ratios of around 1 trip started for every trip ended. However, there are several major outliers in both Manhattan and Brooklyn who see far more trips leave than arrive, and would thus naturally become depleted.

Then I wanted to see how this usage changed by time of day.  I chose hour groupings that represented morning rush hour, the work day, and evening rush hour.  Particularly interested in the flow and natural redistribution of bikes across individual stations, I chose the maps_ratio() function. (click to enlarge)

These three graphs show several interesting patterns.  In the morning (hrs 6-10), stations in midtown and the financial district (really most of the central island, through to the tip) have low start:end ratios, whereas peripheral, residential neighborhoods show high ratios.  Commuters take bikes into the center of Manhattan on their way to work, and there is little balancing traffic in the other direction.  This effect seems to disappear during the day (hrs 11-15) when there is a lot of parity between the flow ratios of different stations--the middle of a work day seems to create no clear usage directionality.  In the evening, the commuter effect reappears, except this time not surprisingly in the reverse.  Stations in midtown and the financial district have higher flow ratios than in peripheral residential neighborhoods as people commute home from work.  Additionally, large outliers (big black dots) appear during morning and even rush hours, and disappear during the day--which can be explained by the fact that many of them are located around transportation hubs.