Data Analyzing Mass Shooting in US

Data shows United State is the country with the most mass shooting in the world. From 1966 to 2012, nearly a third of the world's mass shootings took place in the U.S. More than 200 mass shooting killings have occurred since 2006 and this trend is not slowing down.  On June 12, 2016, United States suffered its worst mass shooting in its modern history when 50 people were gunned down and 53 were injured after gunman stormed into a packed gay nightclub in Orlando. The frequent occurrence of Mass shootings in US is becoming a disturbing trend that is showing no sign of slowing down. Schools, movie theaters, shopping centers, and residential areas are some of the areas that have been targeted by shooters.

This visualization project is divided into 2 parts. The first part will analyze the mass shooting occurrence from 1966 to 2016 in US. The data used for this section was downloaded from Stanford University Library Mass Shooting in America (MSA) database. The data-set consists of 50 variables. The second part of this project will focus on the recent occurrence of Mass Shootings from 2014.

A comparison study will be performed on mass shooting incidents for the year 2014 and 2015.The data was collected from Gun Violence Archive which is a nonprofit corporation formed in 2013 to provide free online public access to accurate information about gun-related violence in the United States. The states of Hawaii and Alaska have not been considered for this study to maintain map aesthetic.

In this section, a study was conducted to compare the occurrence of mass shooting incidents by states and the number of injuries and fatalities as a consequence of these incidents. The data used for this study was collected from the Stanford University Library Mass Shootings in America (MSA) database. The definition of mass shooting adopted by the Stanford University Library database is any incident where there are 3 or more shooting victims (not necessarily fatalities), not including the shooter and the shooting must not be identifiably gang, drug, or organized crime related.

Looking at the maps, it can be deduced that states like California, Texas, Florida and Georgia have comparatively higher numbers of mass shootings than other states. These higher numbers of occurrences can be attributed to the higher population these states have. 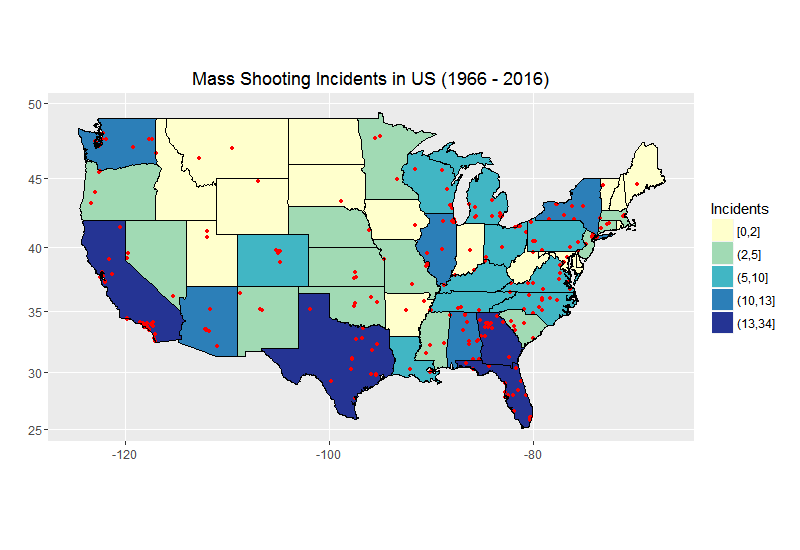 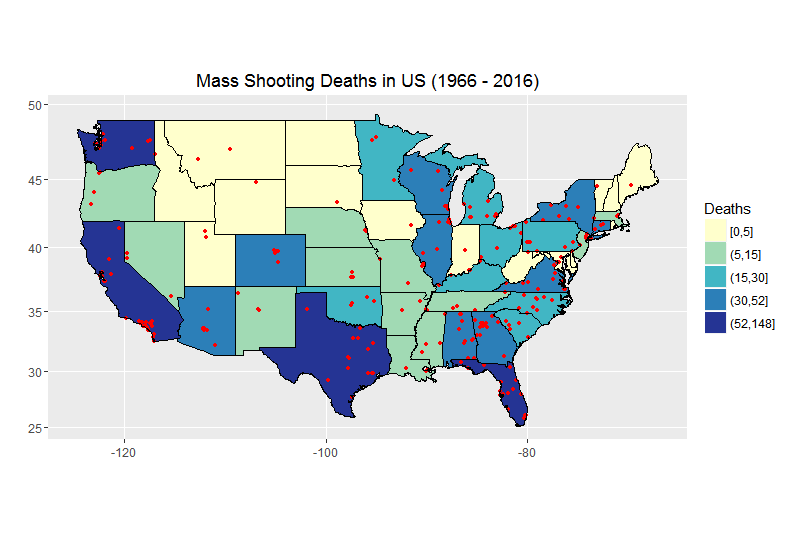 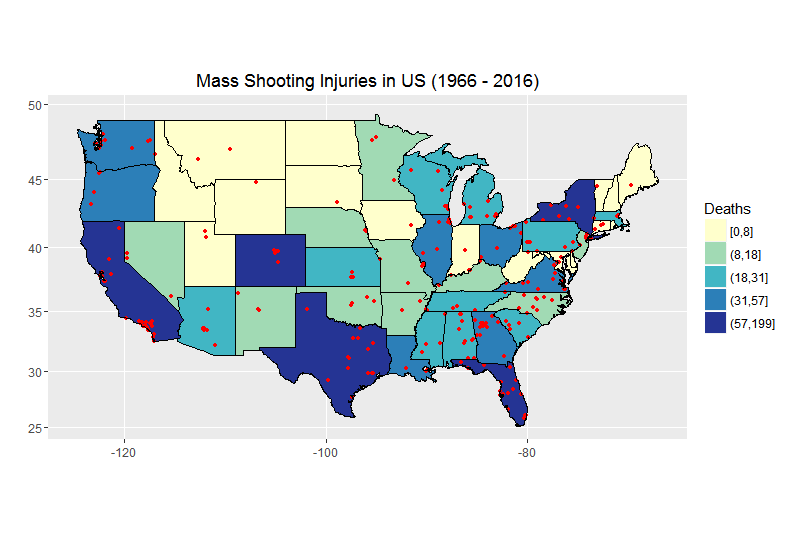 1.2 Mass Shooting based on different categories

Investigations were conducted to find insights on mass shooting incidents based on different variables available in the data-sets. The variables taken into consideration were sex, race, gun type used, shooter's motive and location.

A study was performed to investigate the type of guns that were commonly used during most mass shootings. The data was grouped based on the general gun types which were divided into five different classes. The bar- plot below shows the type of gun that was used in most of the mass shooting and the number of victims that resulted from these incidents. Looking at the bar-plot, it can be deduced that handguns were more frequently used by the shooters during these shootings. Moreover, handguns have been responsible for more deaths and injuries than any other type. 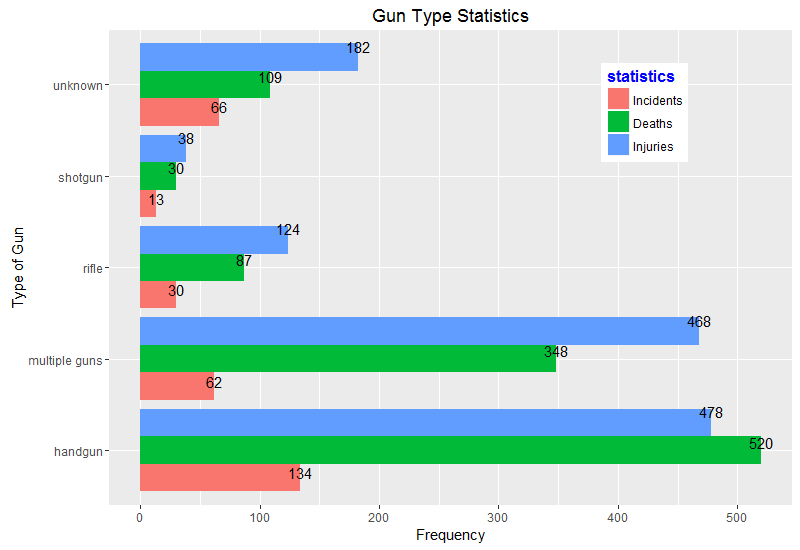 A study was performed to investigate which sex has been more responsible for carrying out these mass shootings. The data was grouped into 4 classes as shown in the bar-plot. Looking at the plot, it can be inferred that the shooters have predominantly been male. They lead the numbers by a very large margin compared to the female and other classes. 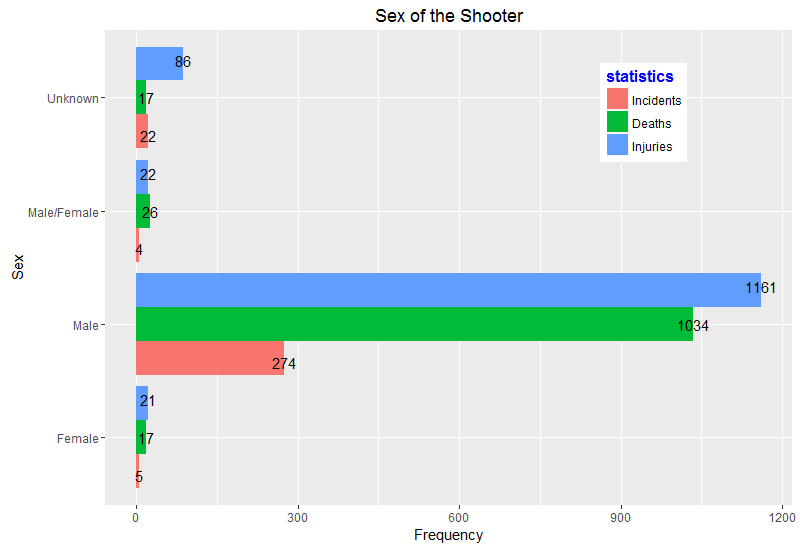 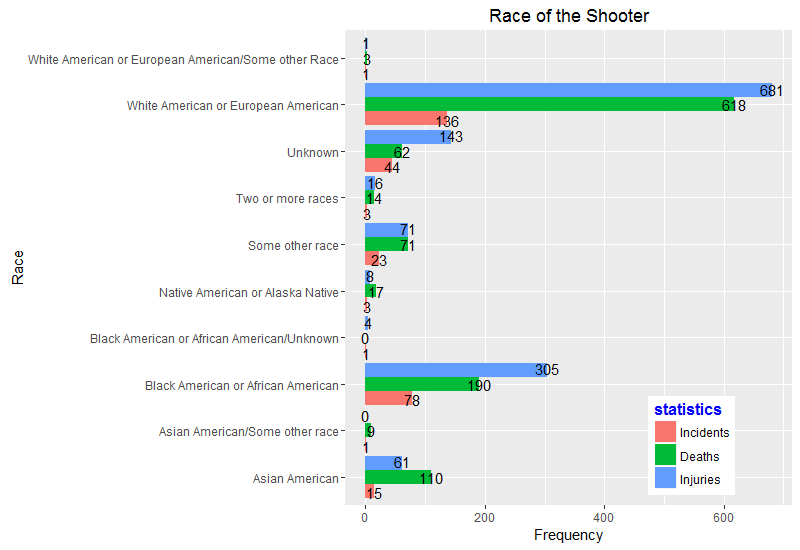 A study was done to investigate which types of locations have been targeted more by the shooters during mass shooting incidents. The data was grouped by the type of place and only top ten classes were taken into consideration. The bar plot shows that residential home/ neighborhood had more mass shooting than any other place.  Schools were categorized into different subclasses. Had it been categorized into just one group, the number of occurrences of mass shootings would have been closer to the numbers shown in residential areas. 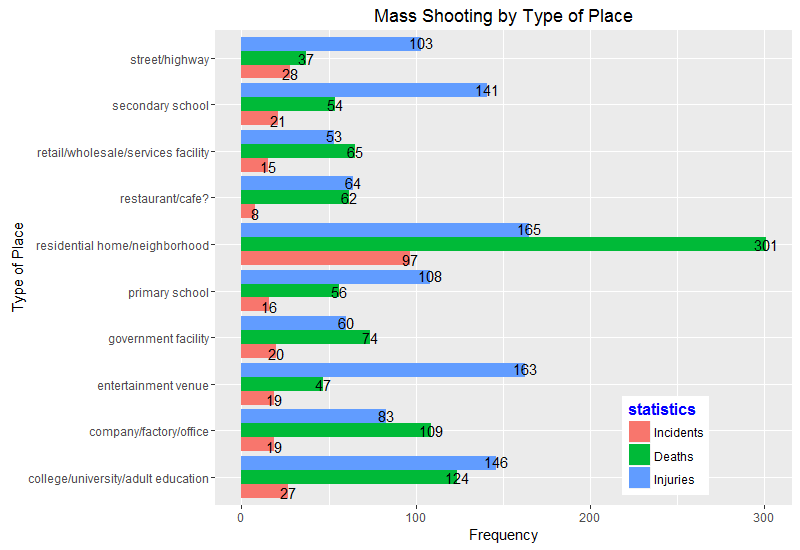 1.2.5 Mass Shooting Classification by Motive of the shooter

A study was done to investigate what were the reasons behind these horrific mass shooting incidents. In most cases the motive behind the mass shootings was unknown followed by mental illness of the shooters. There were also many cases of domestic and social disputes which led to these mass shootings. 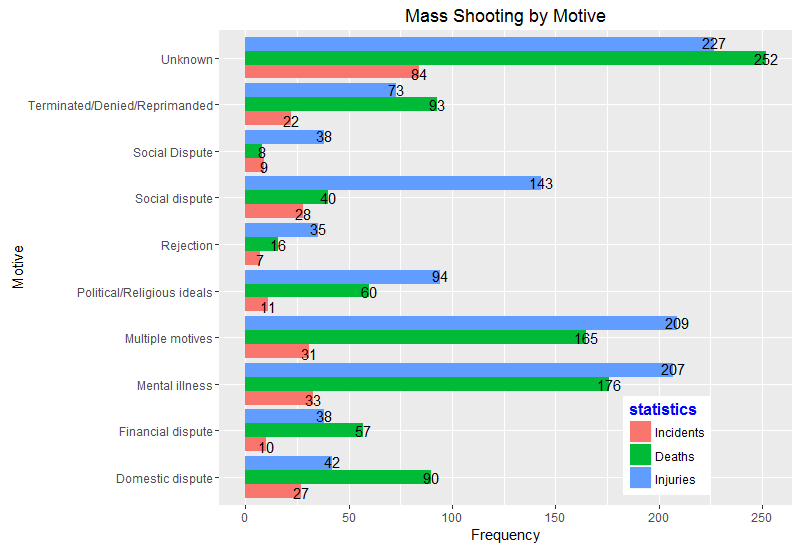 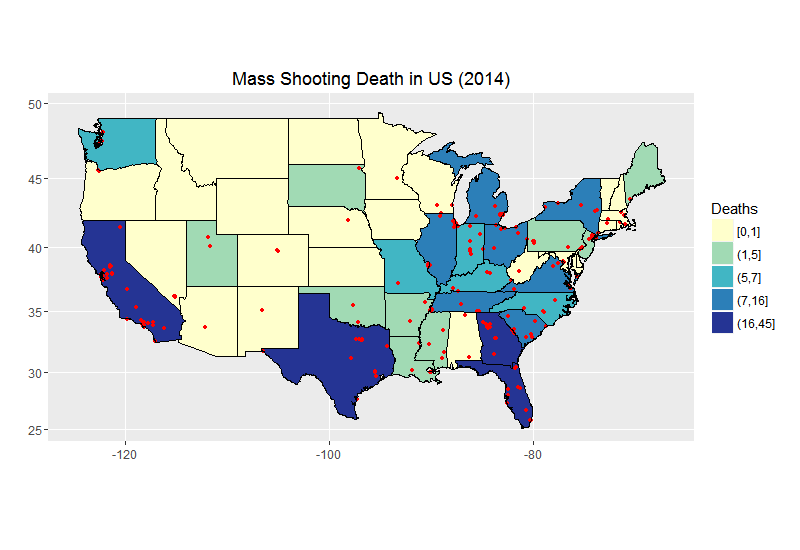 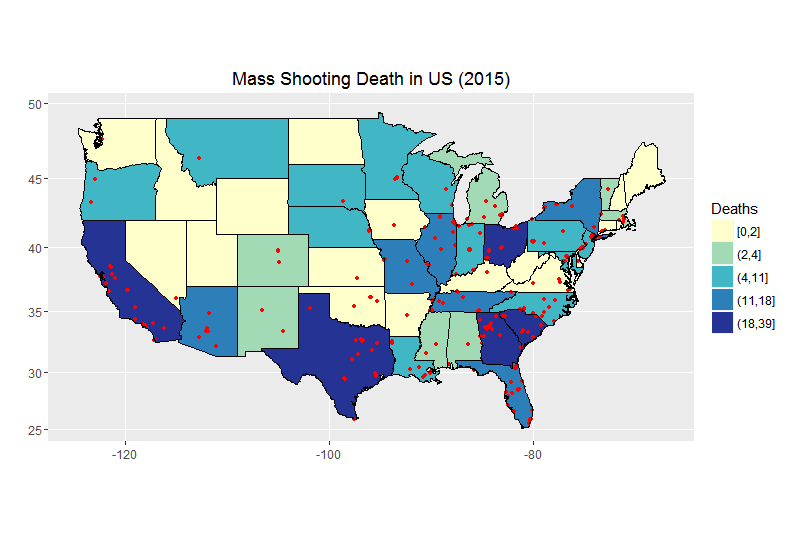 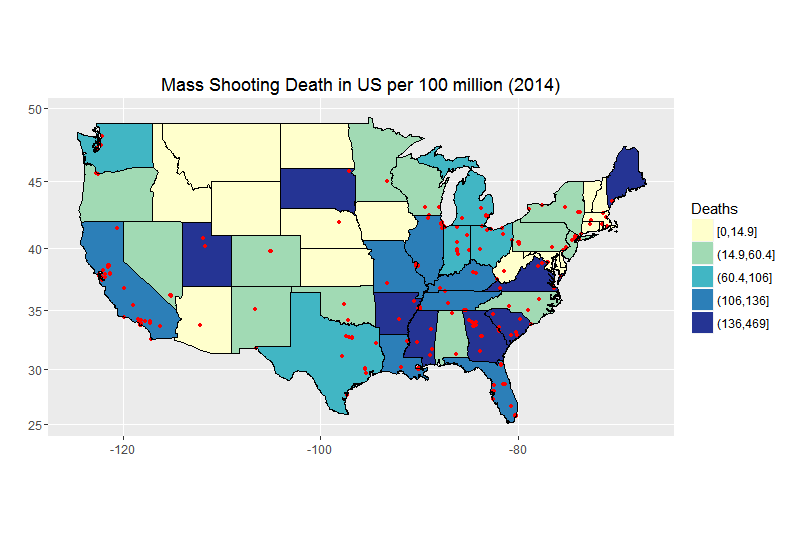 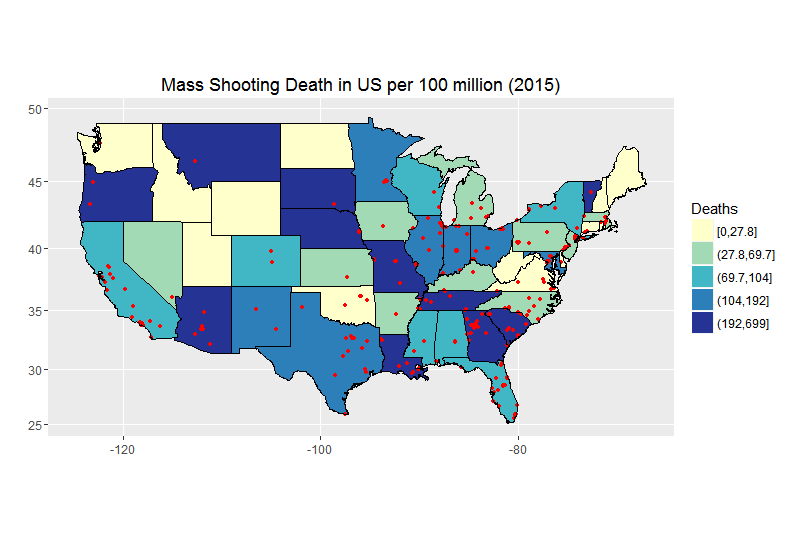 The maps below show that red areas (spots) have been formed mostly near big cities. The darker red spot seems to be near Chicago (IL) where gun violence rates are very high. Similarly, there are red spots near Los Angeles (CA), Atlanta (GA) and places on the East Coast. In both heat maps, the pattern is almost similar and the same areas are found to have a higher number of mass shooting incidents. 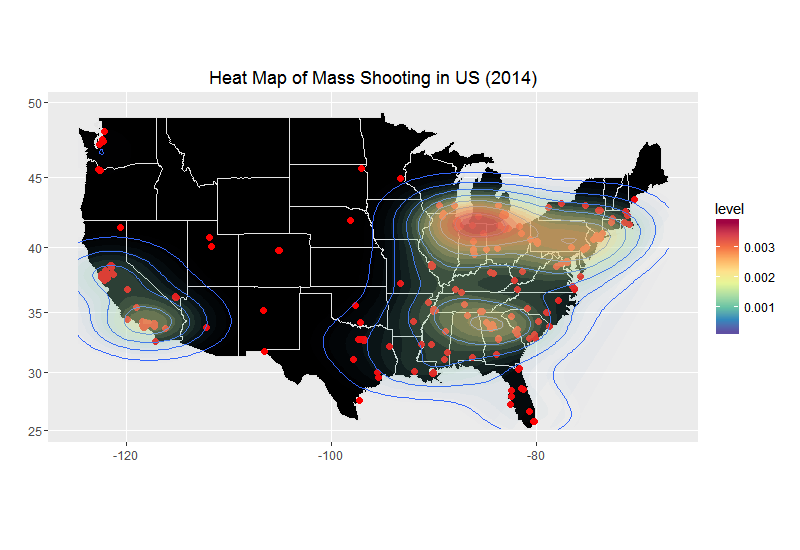 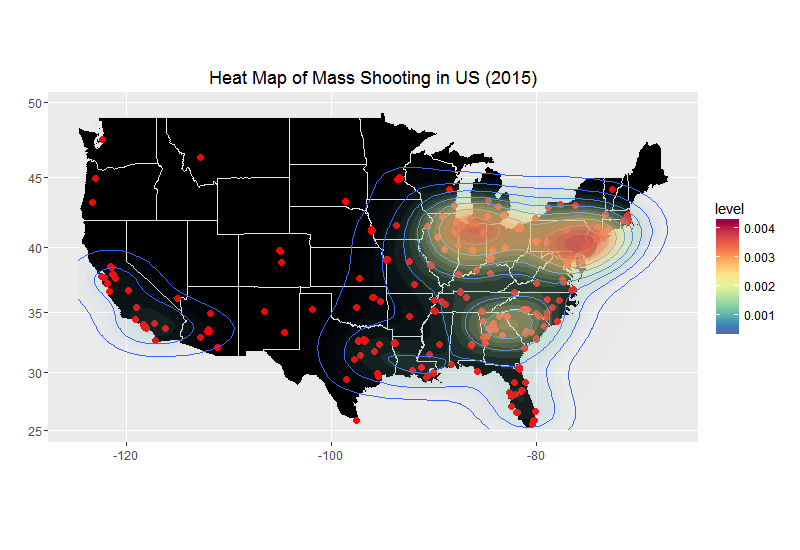 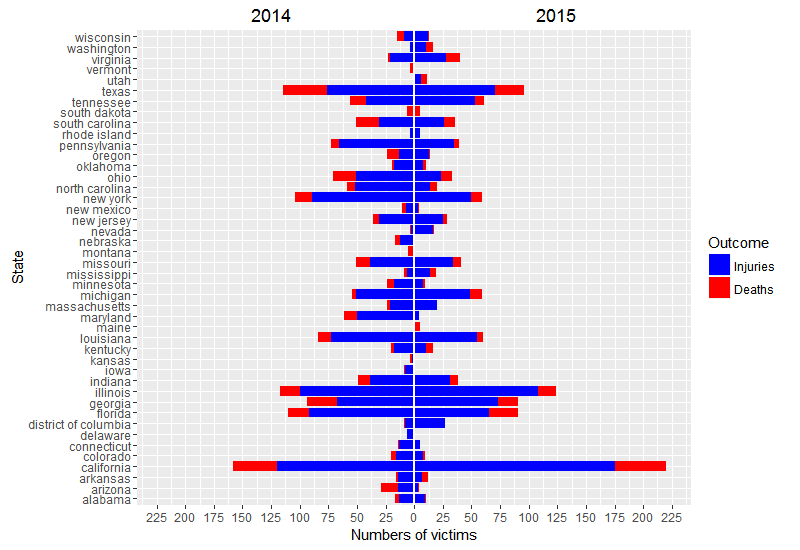 To sum up, it can be concluded that mass shooting incidents in states like California, Florida, Georgia and Texas are very high with high number of fatalities and injuries. This can be attributed to the fact that these states have larger populations. However when normalizing the data with population for the 2014 and 2015 data, states like Georgia, Louisiana, South Carolina had a higher number of deaths compared to California and Texas. There was a slight increase in the number of mass shootings for 2015 compared to 2014. States like California, Georgia, Illinois and Florida had a higher number of deaths and injuries for both years.

In recent years, mass shootings in the United States seem to be in an increasing trend with President Obama also recognizing it as becoming routine for Americans. He has time and again mentioned that Americans have become numb to these incidents and reiterated that there should be an amendment to the gun laws and background checks. The pattern of mass shootings in the US has no parallel to any other country in the world.  This may be because it is so easy for people to get guns.  Australia confiscated millions of firearms and made strict guns law after a mass shooting incident on April 28, 1996, which took lives of 35 people.

The country has not had any such incidence since then which is a remarkable achievement. Isn't it time for America to take such a drastic step? How many more innocent lives will have to be sacrificed before we finally realize that guns make it easier for these maniacs to inflict harm on other people. Only time will tell...