This post is about the first of the four projects we are supposed to deliver at the NYC Data Science Academy Data Science Bootcamp program. The requirements were:

For this project, you are not only expected to lead your audience through data insights
gleaned from visual representations, but also required to build an interactive Shiny
application that can create and modify such graphics on-the-fly.

You must find the balance of the correct level of interactivity and simplicity that allows an outside user to
both understand your points and also uncover their own insights without getting
distracted by excess accoutrements.

I chose to work on data provided by Bay Area Bike Share. This is a "bike sharing system with 700 bikes and 70 stations across the [Bay Area] region [...]. Intended to provide Bay Area residents and visitors with an additional transportation option for getting around the region, the Bay Area Bike Share is fun, easy, and affordable."

The data was in very good quality so that I had to do almost no cleaning.

For the temperature there were a few missing values for one day where there was no data recorded. Because this data was not too important for the overall application but I did not want to have gaps in the data, I used the zoo library to copy values that already existed for the a variable to the empty cells of the same variable. All of the other data was basically 100% complete so that this part could be indeed kept to a minimum. All the data was converted from CSV to the for R optimized RDS data format to save space and improve the loading speed in R.

Having established the data source to use for my project and acquainted myself with it, I created various aggregations per dataset (cf. Source Data) to be able to calculate various measurements on different groupings of the data. They are:

The visualization of the data had to be done in Shiny, which is a "web application framework for R [to] turn [...] analyses into interactive web applications". Furthermore, I used Shiny Dashboard to create a management dashboard-esque application.

As you can see on the image below, on the menu on the left I created various items to thematically group the charts and maps I was going to implement. These are Stations, Trips, Bikes, Customers, and Weather (cf. Data Aggregates). I will go on to explain them in detail. 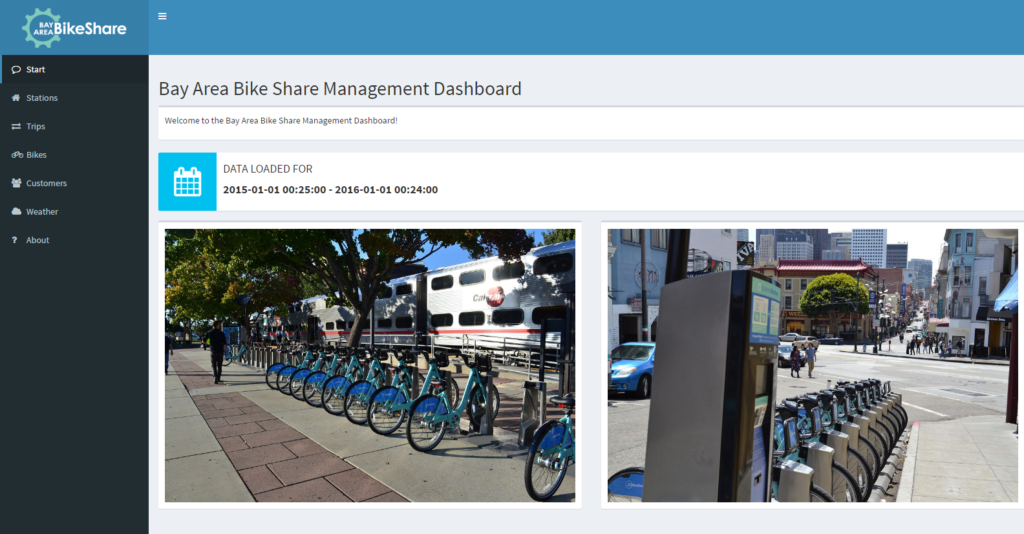 This tab delivers various insights into the data on station level. It starts with showing a map where all the stations are shown at their actual position. The overview tab then shows the user in which city how many stations and docks are positioned.

For each of these stations, detailed statistics about their usage either throughout the year, i.e. per date, or throughout the day, i.e. on a 24h clock, can be found. The stations can also be compared in terms of the aforementioned characteristics.

The next item on the menu is the trips tab. This allows access to detailed statistics about all the trips taken on the Bay Area Bike Share network. It begins with the map the user already knows from the stations tab, but this time they are able to print routes on the map, for both the cases that direction does and does not matter. The default threshold for routes to display is set to 1,000, i.e. there must have been at least 1,000 trips on a route for it to be drawn on the map. The user can change this setting, and the line width corresponds to the amount of trips taken on a certain route.

On the next tab, the sankey chart gives a good overview of the most important routes and stations of the system by indicating by means of line width and node width from left to right - start to end - which trips were popular in the year 2015. Finally, the table shows various statistics for each of the routes.

In terms of bikes, the user is presented with a histogram that shows bike usage in three metrics - total amount of usage, total duration of usage and median duration of usage. It becomes immediately clear that some bikes are heavily used while others seem to be barely touched at all.

On the next tab, the timeline  displays for each bike exactly how many days it was in operation in 2015, i.e. during which time period it was used for trips. The dual slider on top lets the user filter the range of operation days which the timeline should show.

The content of this tab does not react to any user input. It basically shows a bunch of value boxes that compare the two customer types, Subscriber and Customer. 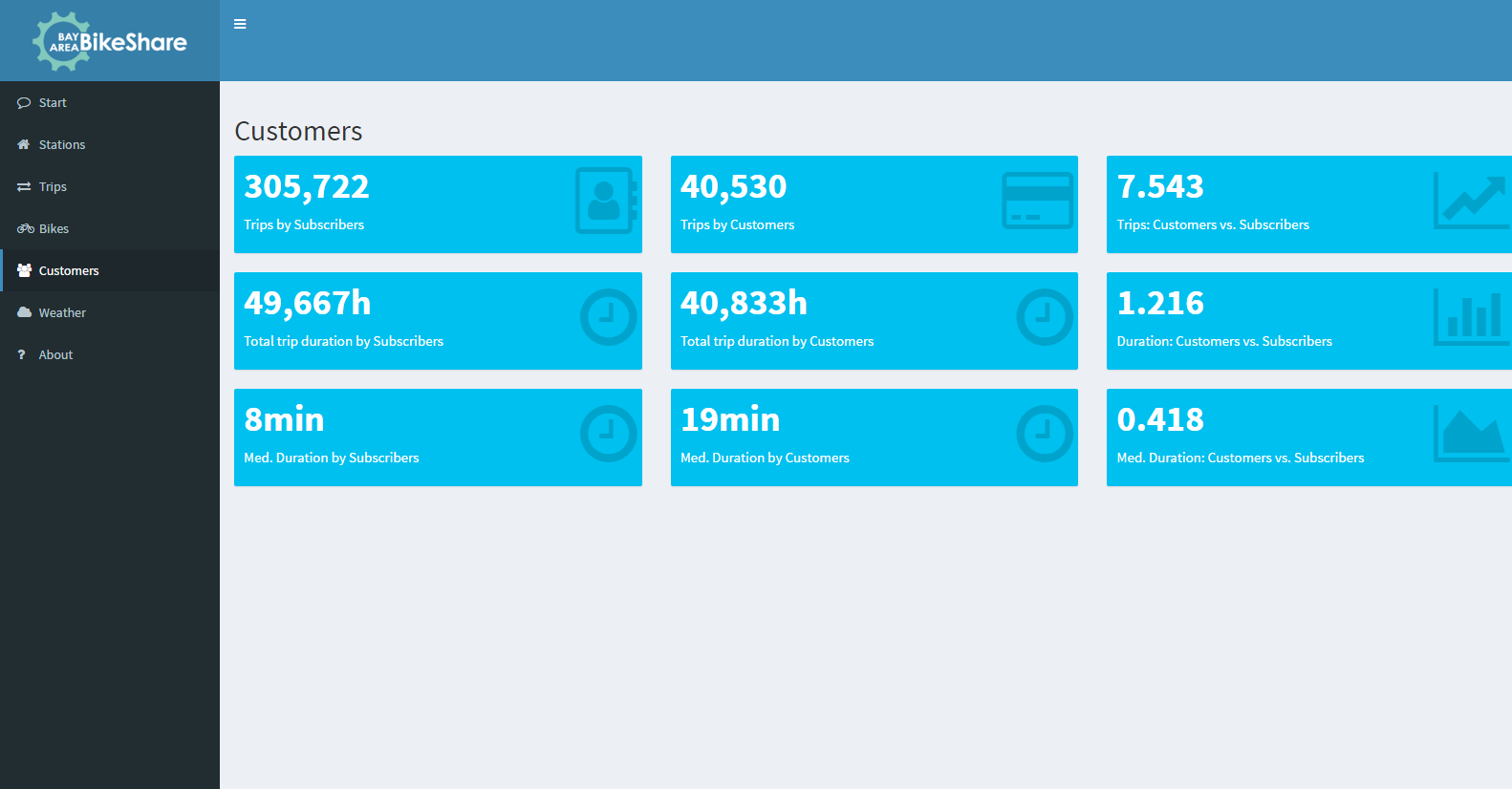 This tab allows the user to take a look at the temperatures in F, C, and the cloud cover per day of the year for each of the five cities and compare it to the trips started on that day on any of the stations in each city.

In terms of actual findings within the data, nothing was too surprising:

This dataset, although only consisting of a few files, makes for a good showcase about the possibilities of a Shiny application. Basic capabilities - info and values boxes, and ggplot charts - were used as well as more advanced features, such as Google Charts and Leaflet Maps. It was a valuable experience to get an overall look at R this way - loading and working with data, creating various plots in different engines, and combining it all together into a single dashboard.

As for Shiny in particular, this project helped me very much in understanding how to exactly use the different files ui.R, server.R, global.R and helpers.R, and how to create an app out of all these building blocks.

As stated above, code and data can be found on GitHub, while the app itself is online at shinyapps.io.