The provision of quality is an important task for any firm. As the availability and scope of data on the consumer experience expands, companies must confront an important issue: how can their data spot emerging issues in the quality of their products and/or services?

In this project, I explore data on complaints made by consumers in regard to the services provided by their financial institutions. When a consumer is unhappy with their bank, they are able to submit a formal complaint to the U.S. Consumer Financial Protection Bureau (CFPB). In addition to investigating issues raised in the complaints, the CFPB also publishes the complaints online.

This complaint dataset is extremely detailed and provides data on the type of product, specific issue raised (and often the actual complaint text), the name of the financial institution, the individual’s zip code, how the complaint was resolved (if at all), among other variables. In short, the dataset provides a great opportunity to explore how to visualize a large-scale dataset on consumer experiences. Effective visualization of this data could also help identify emerging issues at specific institutions that are being raised by consumers.

While I provide a few visualizations below, the current Shiny project can be found here. As the project will evolve, the analysis below provides an initial summary of my work. Future updates will be reflected in the Shiny page link above. 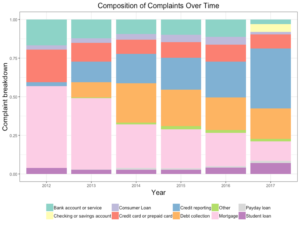 Next, I explore how this composition differs across states as well as to examine a measure of severity (e.g., the % of complaints resolved in a timely manner) for any given product type. The figures shown below are treemaps that break down the complaints at the aggregate-level in the top figure and for Massachusetts in the bottom figure. Although this only compares the national breakdown to one state, the Shiny app also one to easily explore visualizations with different states and year combinations. 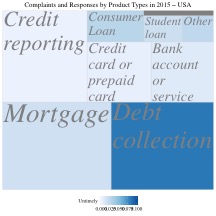 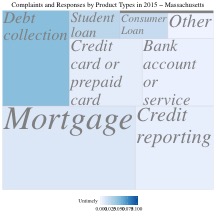 While one should expect state-specific issues, Shiny’s interactive nature allows one to easily navigate across state-year combinations to quickly spot emerging issues. Switching from 2015 to 2016, for example, one can spot emerging issues in Massachusetts. The figures below visually illustrate how debt collection complaints grew rapidly in 2016: 9.7% of debt collection complaints were resolved in a timely manner as of 2016 relative to 4.9% as of 2015. 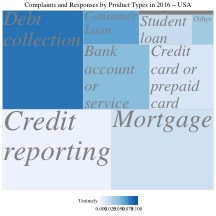 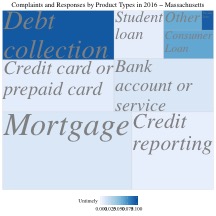 The figures above facilitate contrasting differences across states and time, but they also illustrate the distinction between scale and severity. Visualizing this distinction is helpful as some may differ in whether they consider scale or severity as the more import issue in any given context. Scale may be a more natural way to focus on problem areas, the vast majority of complaints in this data are resolved in a timely manner. One may thus prefer to focus on addressing problems in specific product areas that are less common overall, but where problems are severe. These charts illustrate these differences.

Once one has selected a specific area of focus, e.g. product type, it can be helpful to identify where those specific problems are concentrated across specific institutions and geography.  The heatmap below illustrates the pattern of complaint growth across institutions and geography. The x-axis corresponding to different states and the y-axis corresponding to the largest 19 institutions in the data that have complaints in all states. It shows the concentration of complaint growth within Navient Solutions occurs across most states. It also shows some specific areas of growth: American Express in Maine and Barclays in New Hampshire.

While the states in in this figure correspond only to those in the Northeast, users can select different levels of geographic (as well as institution) coverage in the Shiny app. Most importantly, however, it also allows one to quickly identify the specific locations where an institution’s complaint growth is the most pronounced, benchmark patterns relative to other institutions, and also to also spot regional issues. 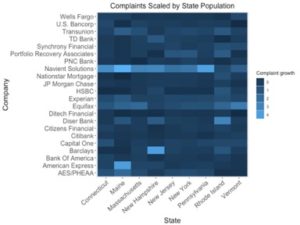 The visualizations above illustrate some of the difference across issues and institutions within the CFPB complaint data. The most important feature of this analysis is, however, the interactive visualizations provided through the Shiny app and the potential patterns they can allow one to spot quickly.

View all posts by Eric Moore >