Kickstarter could generate more revenue by focusing on projects listed in the US in three categories -- Film and Video, Music, and Technology--through these three methods:

Had these three points been satisfied from early 2011 to 2018, Kickstarter could have generated $4 million in additional revenue.

Kickstarter is essentially an online market that connects creators and supporters. For an online market to grow, one of the most important features that cannot be ignored is the "Network effect". This means that Kickstarter needs to grow both its number of creators and number of supporters. A creator is someone or some company that has an idea that needs funding to let it come to fruition. A supporter is an online user on the Kickstarter who decides to contribute his or her money for the project created by the creator. Because Kickstarter makes money when a project is successfully funded (5% of the money funded goes to the platform according to Investopedia , it is very important for Kickstarter to make sure a creator's project meets the funding goal. Therefore, the aim of this project is to help both the creator and the platform to improve its success rate and, consequently, increase revenue (More information here: Kickstarter Shiny App) 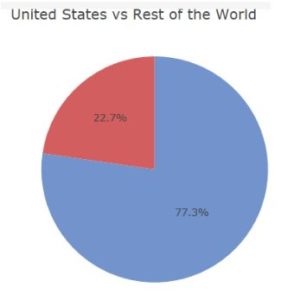 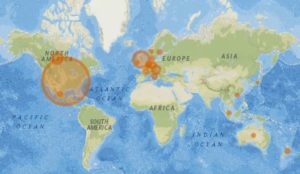 The United States is home to over 77% of the project listings on Kickstarter (Fig.1). Given its position, it makes sense to focus on the listings in the US first to see what Kickstarter can do to improve success rate and thus generate more revenue.

How much revenue can an improved success rate in Film and Video and increase listings in Music generate for Kickstarter? For Film and Video, the median amount funded for all the successful listings are $5,000 (Fig.5). If the success rate can be improved from its current 38% to 50%, which means around 6959 more successful projects, there will be an additional $34,795,000 in, which translates into  $1,739,900 in terms of revenue, just from this category. 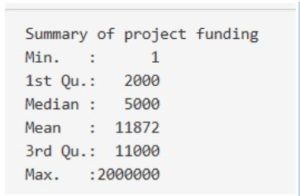 For the Music category (Fig.6), if the project listings can be increased to as many as Film and Video, about 8754 more listings, an additional $30,639,000,  in funding and $1,531,950 in revenue will be generated, given the median funding for successful projects in this category. 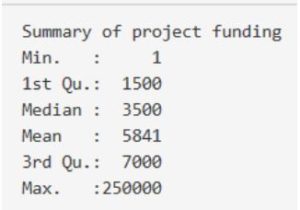 Focusing on improving these two categories is not enough, however. The Technology category has the lowest success rate, 22% (Fig.7), and yet has an average 796 backers, the second highest, for each project under its category. This represents a tremendous waste of supporters’ time and money, not to mention the creator’s effort involved in posting the project on Kickstarter. On average, a successful project only asks for 270 backers (Fig.8), not 796 backers.

In short, many supporters funded projects that will fail, and many creators create projects that will not be funded. Kickstarter not only lost revenue from the Technology listing, but also gives an idea, perhaps, to first-time supporters that projects on Kickstarter are meant to fail. Instead, Kickstarter should look into why these projects fail and why these projects attract supporters in the first place. One reason, for example, could be the amount of funding demanded for supporters (Fig.9). The median funding asked is $10,800, which is twice as much as Film and Video asked. Kickstarter should alert creators in technology space to lower their scope of project, and therefore funding, in order to achieve more success.

However, this is not the whole story. Projects in technology receive attention because of what they promise. One place to look is “Purple® Pillow: The World's First No-Pressure Pillow.”This project in technology has been overfunded by more than 10000%, that is 100 times the original goal. The project has a very detailed description and various images of the products. Supporters who funded this project will likely to come back and recommend this website to others because they are finding a project that interests them, one that can potentially improve their sleeping quality. Therefore, Kickstarter should also encourage creators to create projects with detailed descriptions and images.

How much potential revenue is represented in this space? On average, the projects that have been successfully funded have a median funding goal of $4,000(Fig.10). Assuming now all the technology projects have adjusted their scope and funding demand to $4,000 and improved their success rate from  22% to average, which is 38%, an extra $13.7 million in funding and $685,000 in revenue could be generated. Furthermore, the resources that have been distributed to projects in technology will no longer be wasted. Less funding asked also means more money will go to other projects and category, perhaps Music and Film and Video. 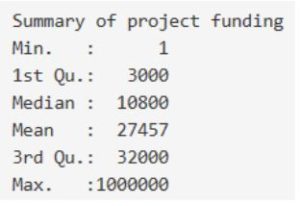 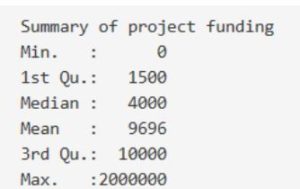 From this brief discussion above, for listings in the US, Kickstarter could have generated almost $4 million in extra revenue from three categories discussed above. Therefore, Kickstarter should aim to improve the success rate for Film and Video, increase listings in Music, and educate creators in Technology category to generate more revenue in the years to come.