COVID-19 Cases, Hospitalisations and Deaths over time in the UK

The Covid-19 pandemic has changed the world as we know it. For over two years, biologists, data scientists, politicians, and many others have been working to contain the virus and stop or reduce the spread through prescriptive strategies. These strategies included restrictions like  lockdowns, business and school closures, as well as mandates requiring masks and vaccines. While these strategies were considered to be necessary at the time, it is important to recognise the negative societal and business impacts of these measures. Analysis of data to assess timing of lifting the various measures that have been implemented is important to return society to normal.

The UK government published daily rates of COVID-19 confirmed cases, deaths within 28 days of testing positive for COVID-19, hospitalisation and vaccination rates in every region of the country. As a country, it provided some of the most comprehensive testing per capita in the world. I performed an analysis of COVID-19 case rates, death and hospitalisations over time  exploratory data analysis (EDA) techniques in R and using Shiny to display my findings and create an interactive app in which the user can explore this data over time for themselves.

To begin, I obtained UK Covid-19 time series data on cases, deaths and hospitalisation over time. Data collection began on March 1, 2020 and has continued every since. When I obtained the files, they contained data up through September 2021, resulting in 1.5 years of Covid-19 data to analyze. Next I found UK local authority geomapping data from the UK government geoportal website to map the case rates with deaths.

The R-shiny interactive page for this data analysis can be found here.

As you can see, if you toggle the dates on the R-shiny page, at the beginning of the pandemic, the deaths initially reported within the database  were limited to the southeast of England, largely in high-population density areas like London, Birmingham and Manchester. As the availability of testing for COVID-19 had not been established as yet, the case data is limited at this time. Due to the exponential rise in cases and the preceding events in Italy a few weeks earlier, the UK went into its first and most restrictive lockdown on the 11th of March 2021. 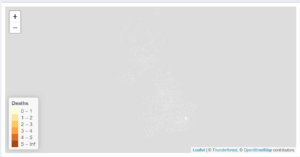 By April 2020, deaths had spread across the whole country and were mainly concentrated along areas of high population density. Case counts were not being reported within the application at this time. 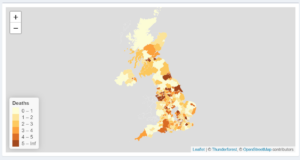 By June 2020, case counts were being reported more accurately as the availability of testing increased across the country. Death counts had fallen, as had case counts within the UK across all regions, despite easing of lockdowns. 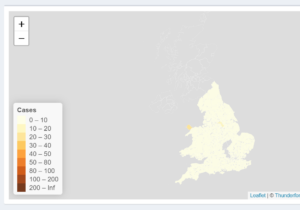 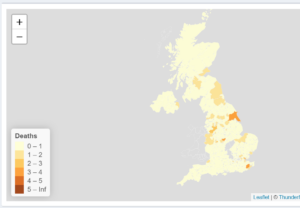 However, by winter 2021, both case counts and deaths in all regions had risen. In December 2020, the UK approved its first COVID-19 vaccine and prioritised these for the most vulnerable and elderly in society. Vaccination was performed in a stepwise fashion to ensure availability of vaccines for the most vulnerable. The UK went into a second short lockdown in November 2020 and then into a third lockdown in January 2021 as cases, hospitalisations and deaths all continued to rise. 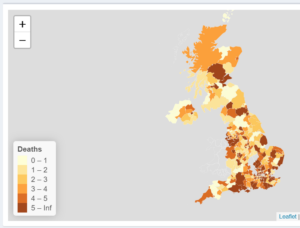 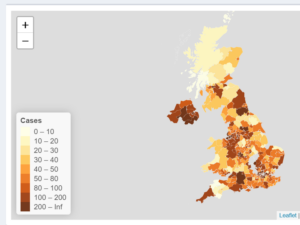 As vaccinations continued to cover the population with a relatively good uptake across the population, a clear break can be seen. Case counts continued to rise by August 2021, but deaths remained relatively low. As a result, further lockdowns were not instigated within the UK, though some mitigation measures continued. Although further data is not shown, the omicron variant and further sub-variants have shown a similar disconnect between case counts and rates of death within the UK and the world. This is thought to be due to the fact that, while these variants are more infectious, they are  less deadly than the previous variants. 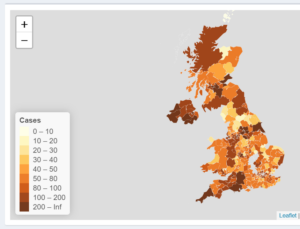 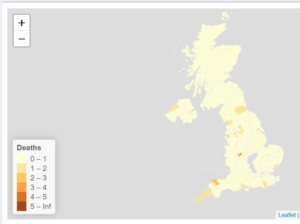 As you would expect, hospitalisation and deaths followed a clear correlation over time in the UK. As COVID-19 primarily causes respiratory issues, the severity of COVID-19 illness can also be seen through the numbers of mechanically vs non-mechanically ventilated patients due to COVID-19 in UK hospitals over time through the interactive map on R-shiny. We show that, of the patients who needed hospitalisation for COVID-19, a higher ratio of patients needed mechanical ventilation in the first peak of COVID-19 in the UK compared to the second peak. It is, however, possible that this ratio is also skewed during the first peak due to medical advice from China where the first cases were seen, advising that mechanical ventilation is better for management of COVID-19 than positive airway pressure. However, by the second peak, this advice had been shown to be inaccurate, and patients were managed with a variety of measures including positive airway pressure and mechanical ventilation if needed. This demonstrates that although you can look at the data in isolation, domain specific knowledge can also help interpret the data that is being generated. 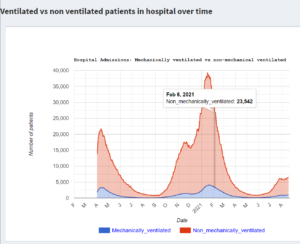 View all posts by Vallari Shah >