Data Study on The Changing Landscape in the NBA

As an avid fan of the NBA and NBA technology, one can argue that the landscape of the NBA has transformed in many areas of the sport. From broadcasting to players, to the science of ankle injuries, the NBA is moving into the era of data.

Seeing the growth of the NBA, I wondered how previous generations of NBA players stacked up against current players in terms of birthplaces. As technology brings different parts of the world closer together, I would like to see how this trend would affect the way NBA scouts recruit players from places outside the U.S. My research began looking at how the NBA landscape altered itself from a U.S. oriented player to a larger international presence.

From Kaggle, I acquired two datasets. The first dataset included the names of every player that competed in the NBA, along with their birthplace. For this dataset, I removed all the NaN birthplaces to clean the data.

The second dataset included player stats per season. I merged the two datasets, where I left joined on the first dataset with the second dataset. In performing the join, I was able to calculate the average career length of a player, to be 5 seasons (5 years). I used this new information to group every 5 years of players as a generation.

To see how the landscape of the NBA altered itself from U.S. dominate players to a larger diverse crowd, I calculated the percent difference between U.S. born players and those born outside the U.S.

To review my code:  GitHub

In my research, I used the percent difference of U.S. born players against international born players from 1942 to 1997. The players born in 1997 are either rookies or second-year players in the NBA. In calculating the percent difference, you can see in the graph below, there’s a clear trend of overseas players increasing year over year. The graph shows the U.S. isn’t the only place to recruit top-tier talent anymore. In an NBA that values players that can do a little of everything, expanding an NBA scout’s overall candidate pool can give any team the edge they need. 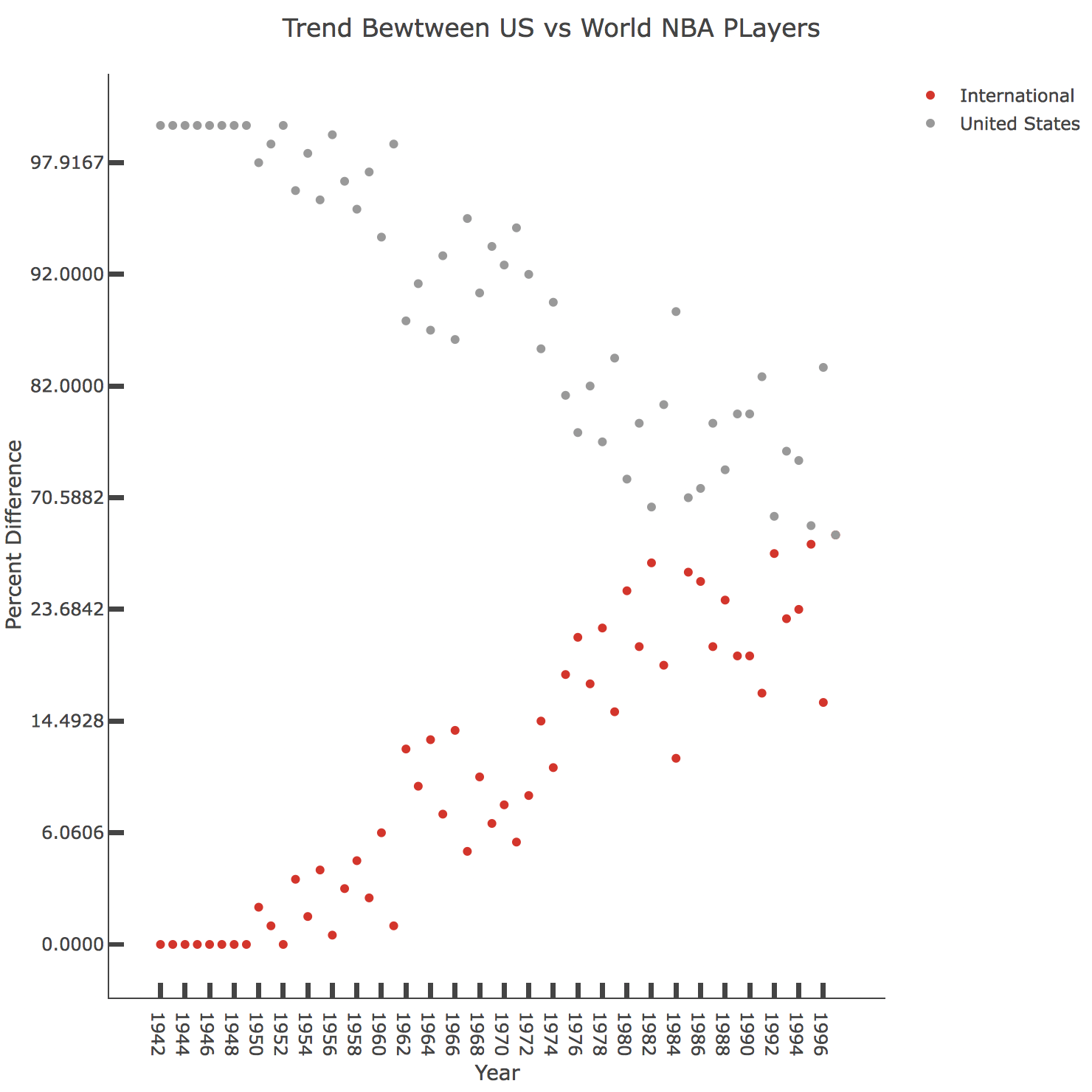 After visualizing the increasing presence of international players in the NBA, I was interested in seeing where these players are coming from. In the graph below, you can see the total number of players that come from each state outside of the U.S. The top country that produces NBA players, outside the U.S., comes from Canada, Serbia following closely.

What’s interesting to see here is that first world countries are not at the top of the list. You would expect the powerhouse countries to produce the most NBA ready players, but above shows, this is not the case. Another interesting outcome of this graph, it shows smaller countries produce NBA players, unlike India or China. To view my analysis, please click on my shiny app link:  ShinyApp.io

There are a few routes I can take to expand my analysis, but I think an interesting route would be looking at Nike and Adidas revenue sets or store locations in each country outside of the U.S.

Nike and Adidas spend a fortune on their marketing budget. The research involved in their marketing strategy should include some sort of analysis as to where each company should open a new store. Maybe, from scrapping store locations, I will be able to see a trend or a correlation between the store location and the number of players that come from those countries. Taking a look at each country’s population, relative to the number of stores, can be an interesting insight as well.

I could also look at each both companies in each country. For example, it would be interesting to see Serbian citizens spending a significant amount of money on shoes and NBA products compared to other countries.

My goal for this project is to come up with some predictive model that enables scouts to locate NBA ready players with the use of data and enable an easier and more cost-efficient way to find and recruit players.