Introduction: What are turnaround stocks?

Turnaround investing is the process of looking for investment opportunities in down-and-out companies that are poised to experience a financial recovery.

In this way, turnaround plays aka deep-value stories are among the most profitable strategies among value investors; mind you, investors willing to invest in these stocks could fall victim of two main risks:

Both risks will be discussed in this post as we answered several questions related to a turnaround screening approach and its backtesting analysis.

Scholar and practitioner literature is substantial but not as vast as for other topics or so-called valuation or trading anomalies. A summary of the most ground-breaking works is shown in the table below. Multiple authors have delved deeply into several dimensions of the turnaround effect such as the management role, recovery stages, leading or financial ratios recovery indicators: 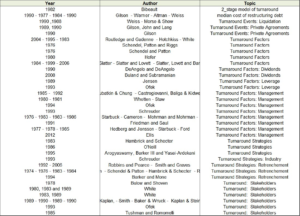 Buland and Subramanian (2008 and 2012) identified dividend omission events as a key point for successful turnaround stories. Dividend omissions -  cutting dividend completely - act as a kick off point in a change corporate behaviour and can be easily measured quantitatively. In fact, a “Quantamental” investment approach combining quantitative and fundamental reasoning is helpful to reduce a preliminary human bias to shortlist popular stories, summarize numerically tons of past research insights and optimize the amount of time allocated to identify turnaround candidates.

Bearing in mind the aforementioned, a turnaround quantitative screening criteria  has been backtested considering more than 15 self-help factors such as dividend omissions or management changes. A sample of the five factors with the closest link to the turnaround strategy rationale is shown below:

Bloomberg and Python have been used for this quantitative screening backtesting analysis while utilizing R and Shiny web development tools for data analysis purposes. The screened universe of companies was comprised of more than 9,000 stocks from the US, UK and European developed markets for the period 2003-2015 with only 215 shortlisted using six-month screening rebalancing periods. Total returns (capital appreciation plus dividends) and dividends are assumed to be reinvested when received. Survivorship bias is taken into account as there are several stocks filing for Chapter 11 and 7 that yield a completely loss of invested capital in the analysis.

The objective of the following analysis is to obtain a  preliminary set of insightful conclusions answering key questions that can help both smart-beta investors eager to discover strategies to be applied using a top-down approach as well as more bottom-up biased stock pickers seeking new screening methods to optimize their candidate shortlisting process:

What type of companies are more prone to meet the screening criteria? 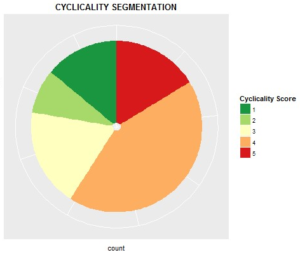 Which is the best investment horizon range for a turnaround investor?

What are the risks a turnaround investor faces when implementing the strategy?

Cost of opportunity risk is important as mentioned in the earlier question for those investors willing to deliver annualized returns above 15%. However, a paramount risk that overshadows any other is bankruptcy as it occurs even when a stock meets some sanity checks from our criteria. In addition, the distribution of CAGR returns for the different investment horizons is highlighting significant negative skew (average below median) and negative kurtosis across all the horizons. Because of this “tail risk” feature, popular risk measures such as standard deviation are not recommended to be used when assessing a turnaround strategy risk profile.

Are there any specific sectors or cyclicality levels where the strategy is more profitable?

An initial conclusion is that short term traders should bias their trading books towards cyclical turnaround stories as displayed in the couple of boxplot charts below. Nevertheless, long term investors can afford some more defensiveness in their portfolios. Mind you, this analysis ignores other important key metrics beyond returns related to risk and risk-adjusted returns that are answered in the next question. 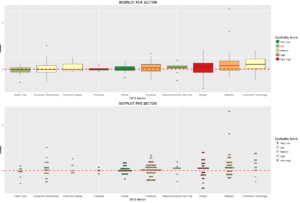 What is the best allocation from a risk-reward and win ratio standpoint?

When comparing hit ratio (percentage of winning trades) compared to risk-reward (average positive return over average negative return) for both short term and long term holding periods, we confirm that short term traders should bias their books towards more cyclical companies where long term investors might prefer some more neutral-defensive bias. The first chart below shows how stocks with cyclicality score 'very high','high' and 'low' score the highest in terms of both risk-reward and hit ratio for short term investment period (six months):

That said, cyclical turnaround plays for long term horizons seem to have a much poorer "hit ratio vs risk-reward" profile in the long term than defensive stocks. The plot below supports this observation with only very defensive stocks ( low cyclicality score) populating the top-right region:

What’s the Bayesian probability of ending a trade with positive P&L when the first six months the position is underwater?

Overoptimism is one of the most dangerous behavioural biases in finance. Investors are reluctant to sell losing trades hoping a low probability turnaround is coming. Bad luck, macro conditions and a myriad of other excuses are set forth by them to refrain from closing their position. Overoptimism comes hand-to-hand with other biases such as cognitive dissonance (self-denial when material evidence against the initial thesis exists) and confirmation bias (empathy gap aka falling in love with the stock).

A good way to test if it makes sense to exit an unsuccessful trade is to analyse what happens with our turnaround strategy during the first 6 months and compare to future results. Bayesian probability theory is very helpful here: Bayesian inference is a method of statistical inference in which Bayes' theorem is used to update the probability for a hypothesis as more evidence or information becomes available:

The questions to be answered is: What’s the probability to end up a trade with positive return when the first six months the trade are negative? Applying the Bayes theorem to our dataset is straightforward as it shown in the table below:

However, when considering only negative bad starts as those where a stock is in negative territory is unfair. For instance, the stock can have a bad start due to broad market conditions or simply being down only by 2%, which is not very significant. The table below filters out this effects considering stocks falling below 15% a bad start (first row) and those falling less than 15% or in positive territory as a good start (second row):

The lesson to learn here is that a stop-loss level like 15% for turnaround stocks during the first six months of trading boosts the success rate of a turnaround strategy. Hence, turnaround investors should bear in mind implementing a disciplined stop-loss policy in order to enhance their performance metrics.

Carlos is a passionate individual for investments and technology with a long/short equity analysis and portfolio management experience approach that combines his fundamental, quantitative and data science skills in order to deliver superior returns. His core strength lies...
View all posts by Carlos Salas Najera >