Contributed by Bin Lin. Bin is currently in the NYC Data Science Academy 12 week full time Data Science Bootcamp program taking place between January 11th to April 1st, 2016. This post is based on his first class project - R Visiualization (due on the 6th week of the program).

Air pollution is a leading cause of death across the globe, and contributes to stroke, heart disease, lung cancer, and other respiratory illness. The goal of this project is to explore the air quality of the New York tri-state area.

The datasets used in this project cover the daily data between year 1980 – 2015 for New York tri-state area. Air quality data are  collected at outdoor monitors across the United States and can be download from EPA (Environment Protection

The AQI is an index for reporting daily air quality. It tells you how clean or polluted your air is, and what associated health effects might be a concern for you. The higher the AQI value, the greater the level of air pollution and the greater the health concern. Smaller AQI means better air quality.

Therefore, in our data and visualiztion analysis, we will only be seeing the AQI of these pollutants. See Figure 1 for example of the data. And the Overall AQI is the maximum AQI among these pollutants (Overall AQI = max(Ozone, PM10, PM25, CO, SO2, NO2) ). Note that PM2.5 are not being monitored until late 1990's. Therefore there will be some missingness for PM25 variable. 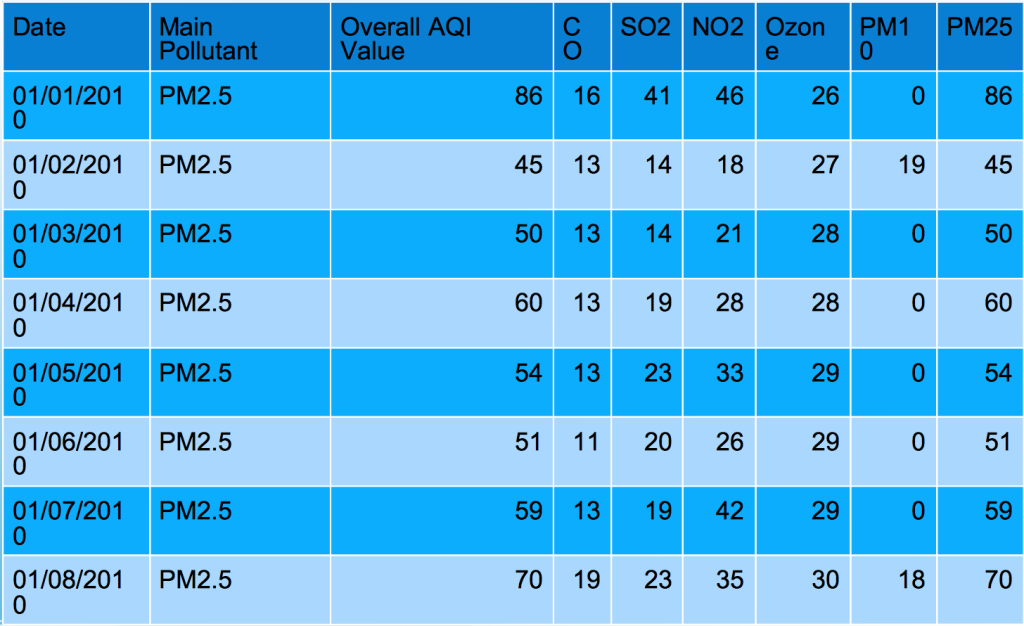 First question, from 1980 to now, is air quality in New York tri-state area getting better  or worse? Let's take a quick visual overview at the air quality over time. See below Figure 3

Figure 4: Percentage of Each Pollutant as Main Pollutant on Each Year

Figure 5: Percentage of Each Pollutant as Main Pollutant on Date

AQI of Each Pollutant:

If by look at just the over all AQI and the corresponding main pollutant, it can not be told what the  AQI of other pollutants are and how they impact our health.

Figure 6: Mean AQI of each pollutant over time

Figure 7: AQI of each pollutant on each date 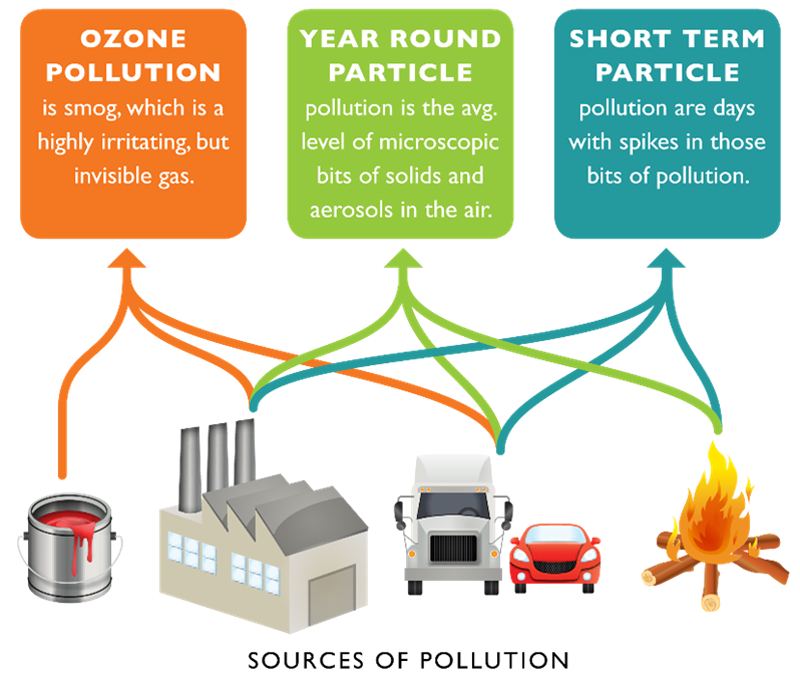 Here is another question? In which months the air quality conditions are good (or bad) in New York tri-state area? Figure 9 tells us that in general, air quality conditions are bad during the summers. Especially from June to August, the averaged air quality is in the "Unhealthy for Sensitive Groups" level. This probably is because more people are driving during summer and more Air Conditioner are turned on. So, go to a trip away from home during summer to enjoy better air somewhere else!

Figure 9: Mean Over All AQI Group by Month

Air Quality of Manhattan after September 11 2001:

As I have been wondering the air quality of Manhattan on and after September 11, 2001, I have download the AQI data for Manhattan during that time of period to explore.

As air quality has been improved and there are still pollutants (Ozone, NO2, and PM2.5) retain at high AQI. Effort should continuously be made to reduce them. How can we make a difference? Drive less, use less electricity, don't burn wood or trash, support measures in your community that can cut air pollution, etc.

Also air quality continues to worsen in cities across the world, especially in low-income countries and developing countries.  Cooperation should be setup among countries in combating air pollution.

Bin is a former professional in software development with now positioned for Data Scientist role. With both strong programming skill and newly acquired machine learning skills, Bin is able to apply scientific thinking to predict or uncover insights...
View all posts by Bin Lin >

Google August 28, 2021
Google Every once inside a even though we select blogs that we read. Listed below are the newest web sites that we pick.

Google January 2, 2021
Google Every once inside a although we pick out blogs that we study. Listed below are the newest web pages that we pick out.

Google December 25, 2020
Google Here are some links to sites that we link to because we assume they are really worth visiting.

Google September 4, 2020
Google That may be the finish of this article. Right here you will come across some websites that we consider youll enjoy, just click the hyperlinks.

Google September 3, 2020
Google Wonderful story, reckoned we could combine several unrelated data, nevertheless definitely really worth taking a appear, whoa did one find out about Mid East has got much more problerms too.

OnHax Me August 19, 2020
OnHax Me [...]here are some links to internet sites that we link to mainly because we consider they are really worth visiting[...]

mksorb.com August 5, 2020
mksorb.com [...]we prefer to honor quite a few other world-wide-web web pages around the web, even when they arent linked to us, by linking to them. Beneath are some webpages worth checking out[...]

mksorb.com July 30, 2020
mksorb.com [...]please pay a visit to the internet sites we comply with, including this one, as it represents our picks from the web[...]