Sometime when people have fever or headache or bad cold, they start to use tylenols.  People might ask which symptom that the tylenols take more effect on when comparing with other medicines.  In general, how do customers choose medications based on the reviews?  How can we answer these questions? These questions can be done by analyzing the drug reviews.  For this project, I am interested in analyzing the drug reviews for Epilepsy.  Exploratory data analysis, Sentiment analysis, and relation between rating and polarity analysis will be presented in the project.

Epilepsy is a series of neurological disorders characterized by epileptic seizures and it is more common in older people.  Epileptic seizures are episodes that can vary from nearly undetectable to long periods of epileptic seizures.  The cause of most cases of epilepsy is unknown. Epilepsy can have both genetic and acquired causes.  Seizures are often brought on by factors such as stress, alcohol abuse, or a lack of sleep.   Nearly 80% of cases occur in the developing world.  Seizures  are controllable with medication in about 70% of cases.  What are the effectivenesses of the anti-epileptic drugs? How do they treat people with various symptoms differently? Does the drug take more effect on a particular symptom?  Pharmaceutical scientists might be interested in these questions so they can use the answers to do further improvement on drugs.  Also, how do reviews help customers in choosing drugs?  To answer these types of questions, we need to do an analysis on drug reviews.

www.Drugs.com has drug reviews information.  For this project we selected 4 anti-epileptic drugs (Gabapentin, Clonazepam, Topiramate, Pregabalin) for the review analysis.

Below is a view on the data that we were interested in from the site.

Each review of the customer includes condition, review comment, and rating. In the snapshot above, the information will be collected are condition (For Reflex Sympathetic Dystrophy Syndrome: ), Comment ("I was diagnosed with RSD on Tuesday. ... I like these pills so far!"), and Rating (10).

The method for scraping the page is BeautifulSoup.

Below is the head of the data frame. 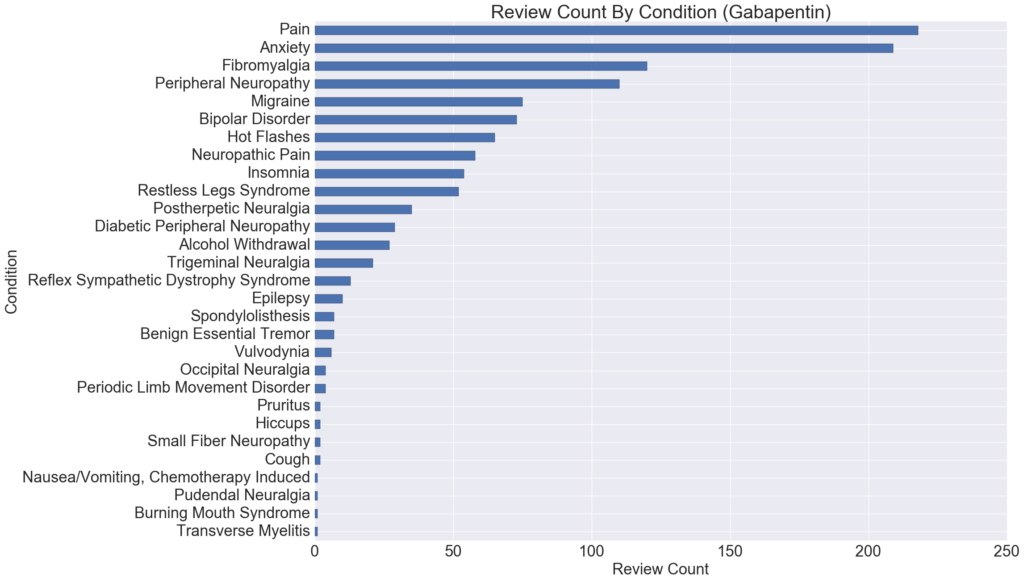 The majority of the reviews are from Pain and Anxiety for Gabapentin and follow by Fibromyalgia and Peripheral Neuropathy. 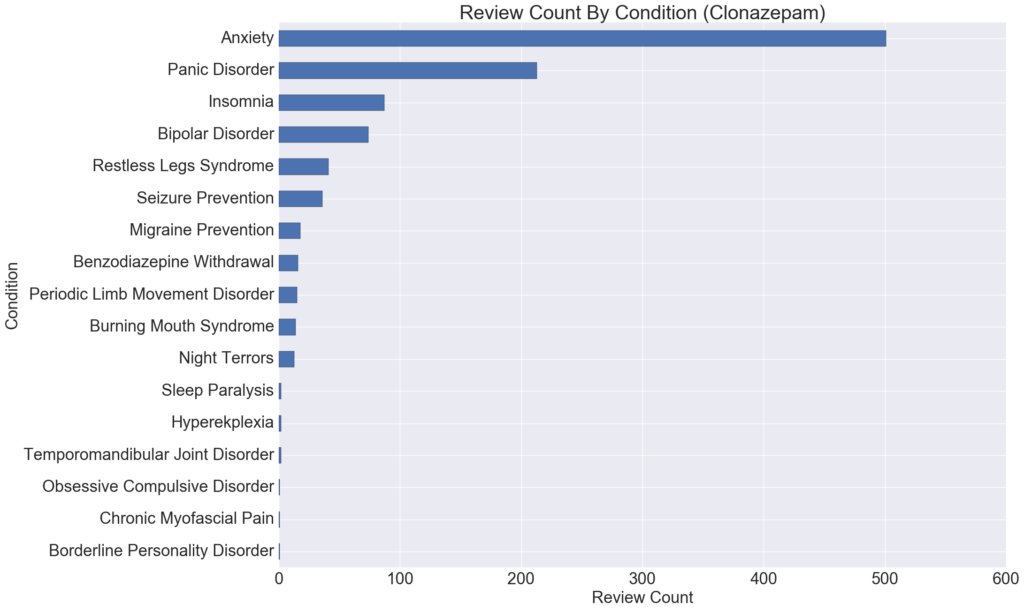 The majority of reviews are from Anxiety and Panic Disorder. 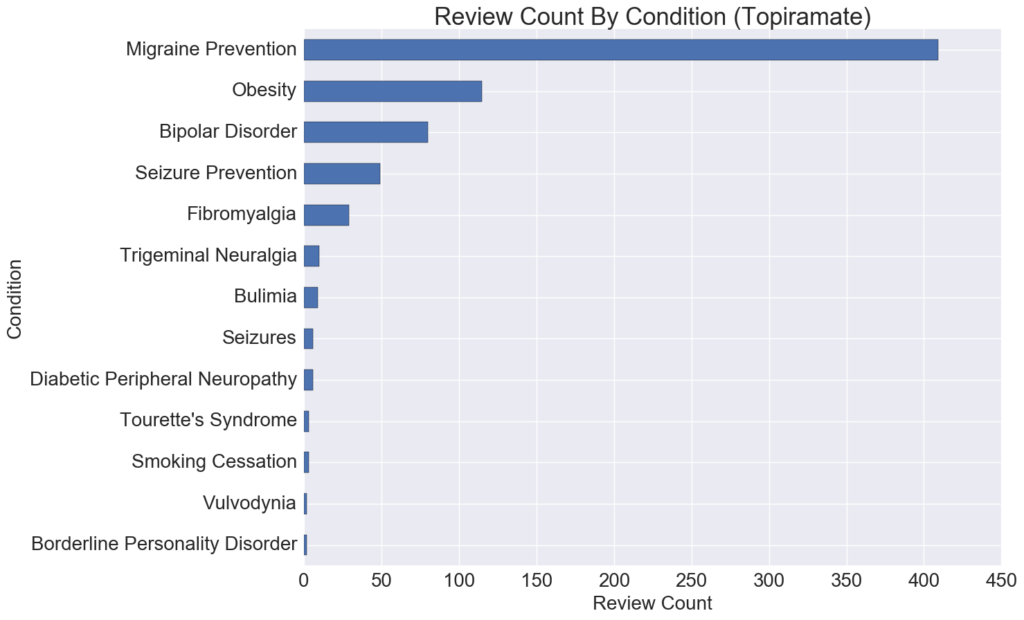 Migraine has more reviews than other conditions. 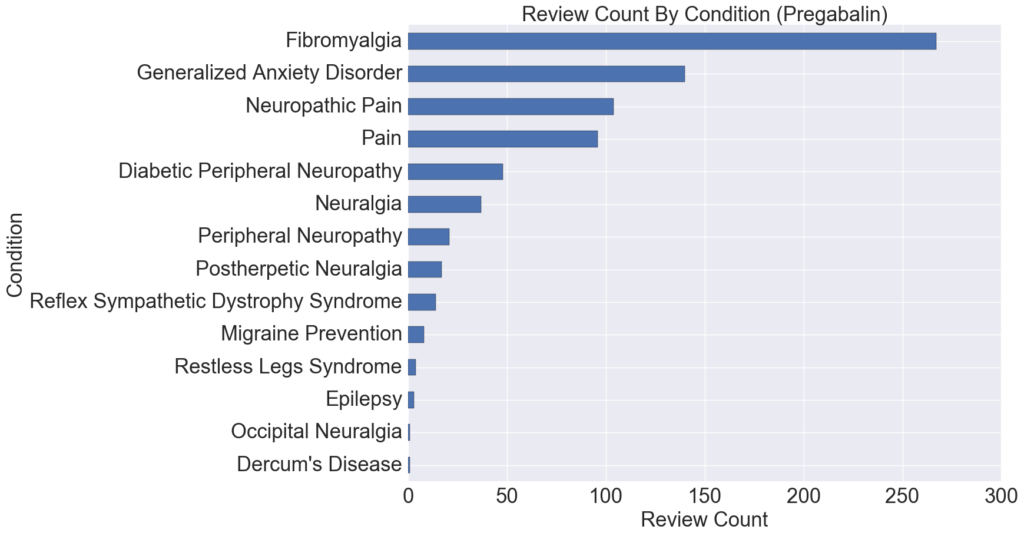 Throughout this analysis we see which condition is used the most for the different drugs. 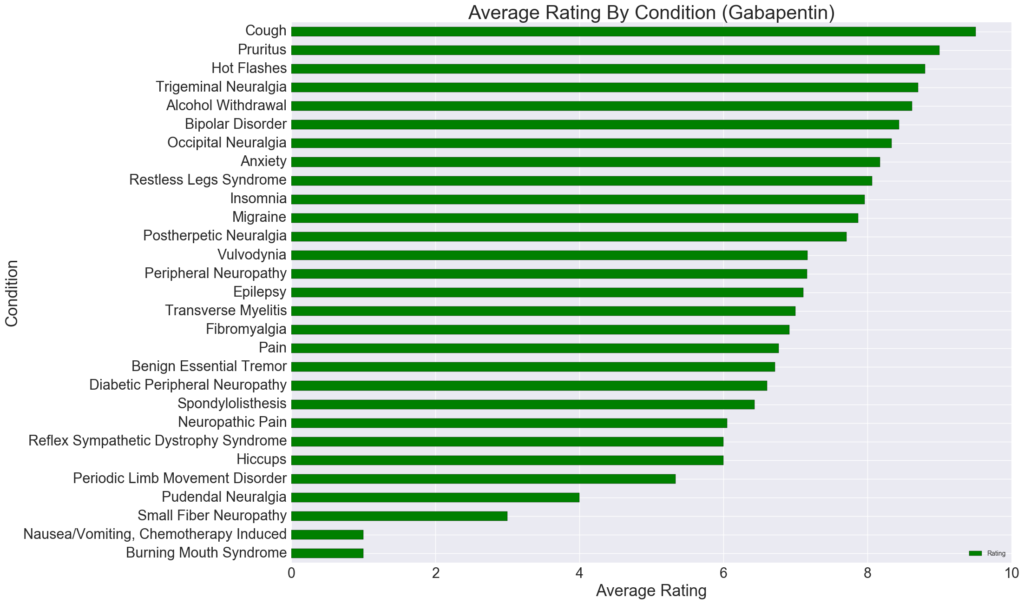 Cough has the highest rating among other condition. 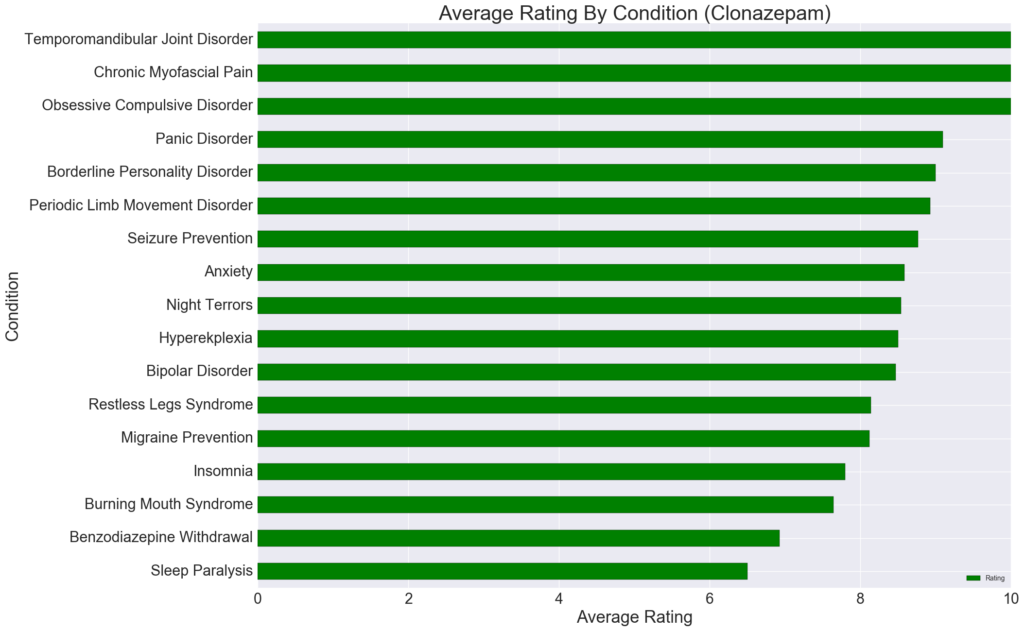 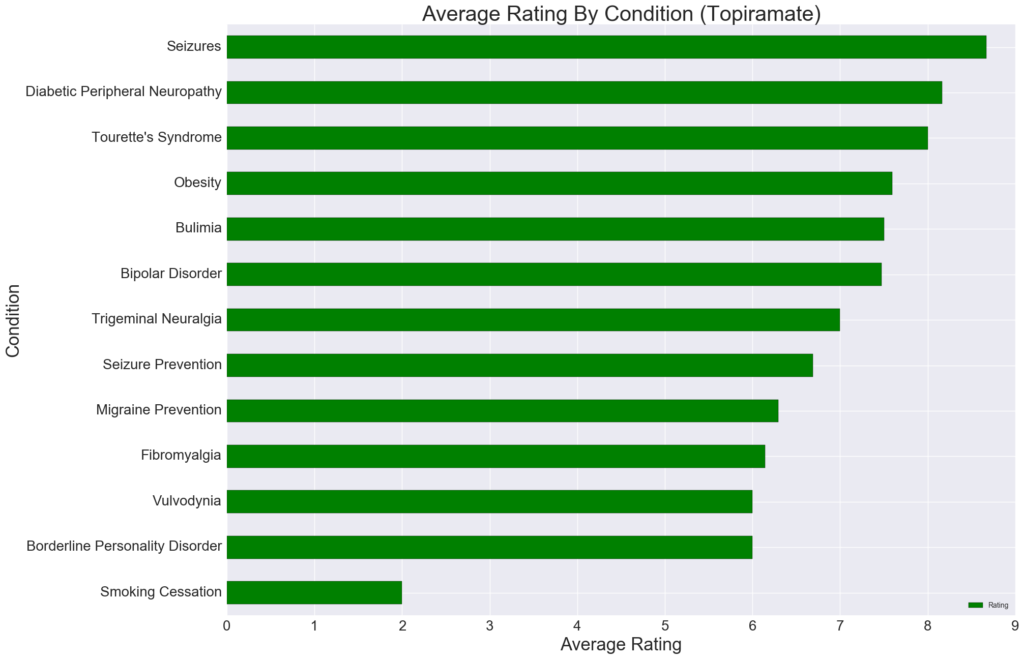 Seizures has the highest rating follows by Diabetic Peripheral Neuropathy and Tourette's Syndrome. 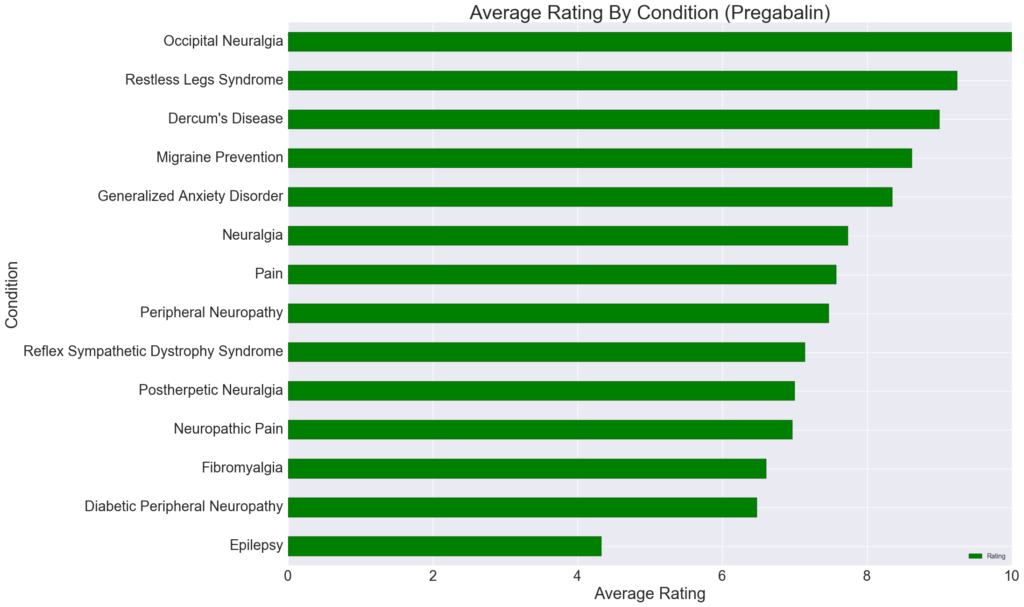 Throughout this drug review analysis, we found Gabapentin is good for cough. Clonazepam is good for Temporomandibular Joint Disorder, Chronic Myofascial Pin and Obsessive Compulsive Disorder.  Topiramate is good for Seizures and Pregabalin is good for Occipital Neuralgia.  The pharmaceutical companies could look at the lower average rating conditions and do further analysis on the drug ingredients. 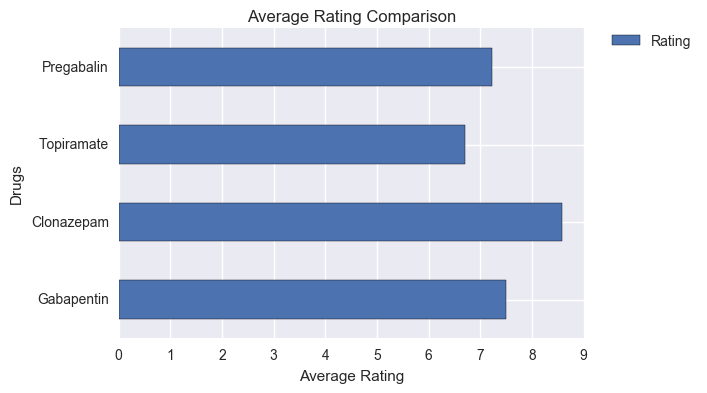 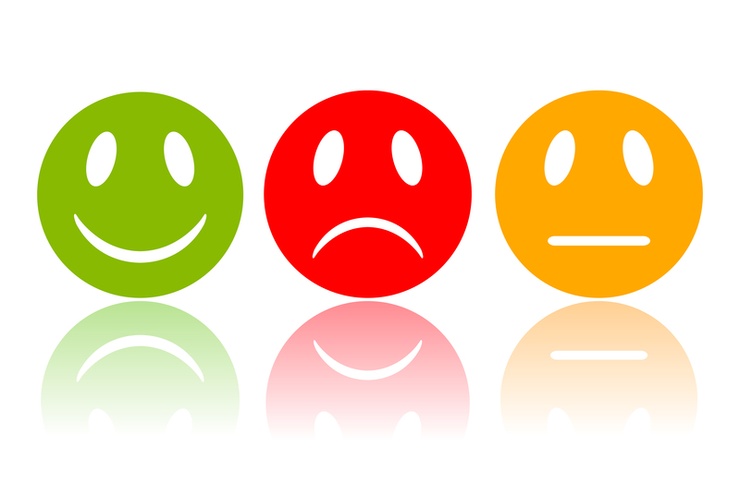 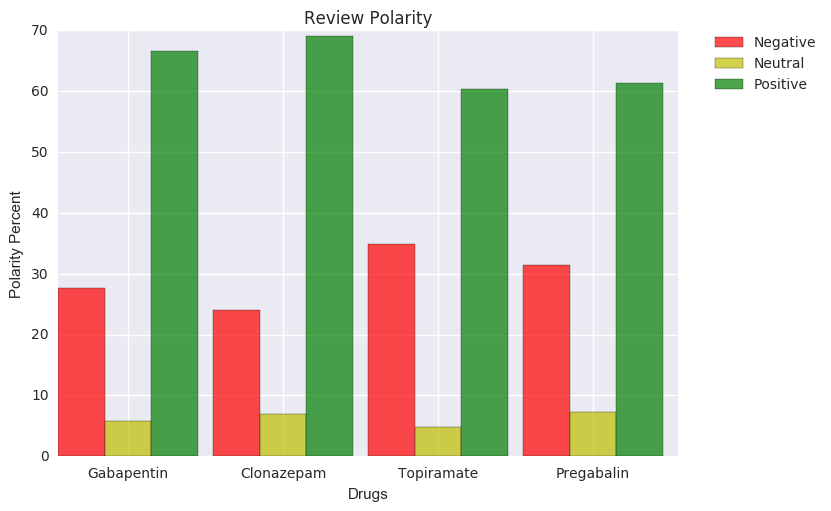 Clonazepam has the best polarity (more positive and less negative comments) among the other three drugs. 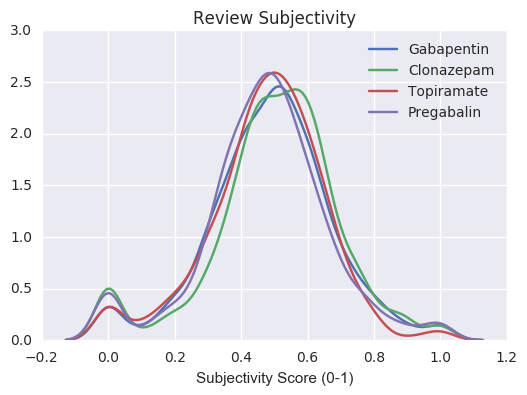 The review subjectivity scores are ranging from 0 to 1.  0 is being most objective and 1 is being most subjective.  All drugs have the same structure, it is almost normally distributed. There is a small amount of reviews being more objective.

Relation Between Rating and Polarity

Do the review comments match up with the ratings?  If there is a higher rating, do you think the comments will be positive? We will look at the scatter plots to make our conclusion. 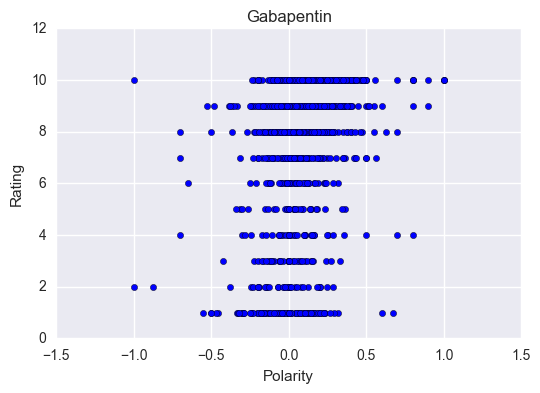 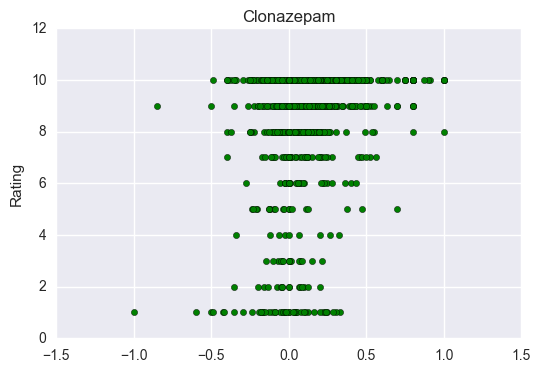 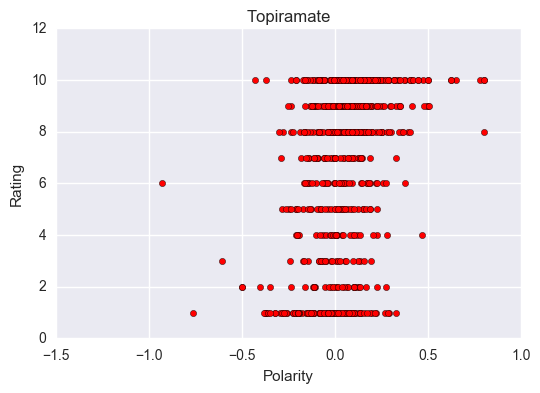 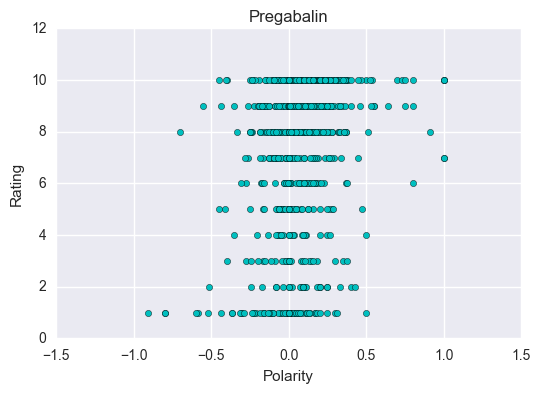 It is surprise that we do not see there is a strong correlation between rating and review polarity but we do see higher rating corresponds to higher positive score.  In the scatter plot of Gabapentin, there is a review with rating of 10 but there is a very negative review associated with it. The reason is the review mentions the customer was very ill before with 'miserable' on it and the other words are neutral.  The majority of the reviews for each rating are between -.5 and .5 polarity.  It is still quite normal as they talk about their illness in a negative way while mentioning about how do the drugs cure them in a positive way.

Drug Education December 17, 2017
Hi there, thank you for the great information. I did have a question though I think you might be able to help me with. I was wondering, Can I lower my doses of gabapentin from 3600 to 900 a day without problems? I really want to decrease my dosage. If you could provide a little insight I would greatly appreciate it!

Drug Education December 12, 2017
Hi there, thank you for the great information. I did have a question though I think you might be able to help me with. I was wondering, What do you personally feel when you take gabapentin for anxiety? If you could provide a little insight I would greatly appreciate it!