Contributed by Ismael Jamie Cruz. He is currently in the NYC Data Science Academy 12 week full time Data Science Bootcamp program taking place between April 11th to July 1st, 2016. This post is based on his second class project - Shiny (due on the 4th week of the program)

Joining the bootcamp allowed me to meet people from a wide variety of backgrounds including graduates from physics, computer science, finance, and architecture. In addition, there was diversity in origin with some classmates not only from New York but from the West Coast and other countries. With such a mix of people in one classroom, I became interested in how this looked like throughout the U.S.

All datasets are from the U.S. Census Bureau, 2014 American Community Survey

The app can be accessed here. 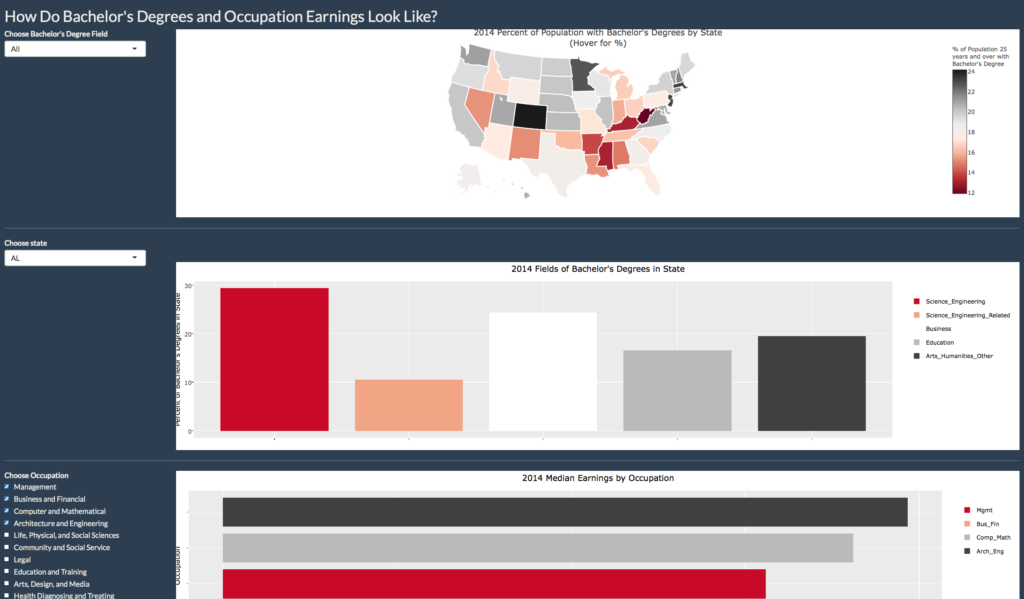 Starting with all fields of bachelor's degrees (BD):

Moving on to occupations in CO:

The difference in earnings for similar occupations, such as LE, across states led me to wonder whether the amount of degrees in that state had a relationship with the earnings in a degree-related occupation. My hypothesis was that states that had a low amount of degrees in a particular field might have higher earnings in a degree-related occupation. The logic I thought was that a low supply of talent might see increased demand in the form of higher earnings. I was particularly curious to see this in the BU field.

Earnings by occupation in GA:

Earnings by occupation in OR:

Although it was interesting to see the breakdown of earnings by occupation for certain U.S. states, the graphs alone were not sufficient to answer my last question of whether there was a relationship between amount of bachelor's degrees as measured by percent of population and earnings in a degree-related occupation. For example, the comparison of business occupation earnings between Georgia and Oregon show similar figures despite having a big difference in business bachelor's degrees. Hence in order to dig deeper into my question I may have to proceed with some statistical analysis. In light of this, while the graphs are able to give a general idea about the distribution of bachelor's degrees in the U.S., further analysis is required in order to pursue deeper questions.

Some questions I would like to explore for future analysis: