Great books with great stories always intrigue me. I am constantly in search of great books as my best companions for pastime. There are some apps available to recommend books based on readers interests or provide some 'biased' recommendation from expert. I want to find a book list that is more neutral.

I found out a list of over 7,000 best books of 20th century on website goodreads. The book rankings are based upon the votes by readers. In addition, it also includes an awards list that a specific book received in the past century.

Due to the broad definition of best books for 20th century, and how it is generated by the normal reader votes, some of the important features as a guiding reference is missing, such as genre. The other important missing data is price, which is of dynamic nature, and cannot be scrapped due to the limitations of web scrapy application capabilities. The following is the final fields of data that can be gathered after proper format and data cleaning.

The following two graphs visualize the top book list in each decade. It is surprising to realize the top-ranked books were distributed in a exponential growth pattern per decade.

The exception is the year 2000, as it is a book list for one year, instead of one decade.

However, in each decade, the top-ranked books were evenly distributed per year.

The top book distribution per year for each decade can be interactively viewed by choosing the different decade.

Over 7000 books can be searched by book title, book author or any awards that a specific book has been rewarded during the past century. The search results will be presented according to the display order specified in 'Order book list by" selection. The missing genre information for the book can be compensated by the shortened version of book description. 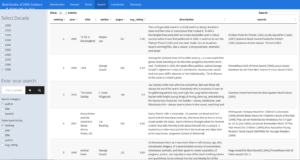 This application provides a best recommendation book list of over 7000 books in 20th century for the interested readers, based on ranking, score, author, title and awards. However, the dataset does not contain the genre category which is important for the readers. The other important missing piece is price. This will be the future improvement if time allows.