New York City doesn't appear to be a very bike riding friendly city at the first glance, nevertheless since 2013, New York has had a bike sharing option: Citi Bike.  Since then Citi Bike has doubled its fleet to 12.000 bikes and expanded to Brooklyn, Queens and Jersey City (NJ). I come from a city with a similar project (Stadtrad) and I was interested to see how Citi Bike is used in New York compared to Hamburg, Germany – my hometown using data.

The most recent data set available on the website of the NYC DOT is from September 2017 and it covers only rides that started in Jersey City, which I found unfortunate because I was interested in the data for New York City. But the data set has about 33.000 rows, a manageable size for the ShinyApp project, while the most recent one for overall New York (August 2017) has almost 2 million.

The data set contains data about:

For my analysis, I added columns for the weekdays as well as simply weekend and weekday, the start time divided into morning, midday, evening and night; age, distance, and speed. Additionally I created another data frame, routes,  that contains the routes between start and end station as well as the count on how many times those routes have been cycled. For the weekdays I used R Studio function weekdays and to get the distance I used the sp package in R Studio.

Bar Chart: most popular Start Stations on Wednesdays in September 2017

First I explored which stations are used the most and the least. I decided that it might be interesting to see if the top station for start and end station change for different days of the week. I filtered the data set for the top ten most and least used start and end stations and showed the outcome with a bar chart from ggplot.

While neither the most popular / least popular start or end station change significantly over the weekdays, the amount of bike rides differs between weekdays and weekends. 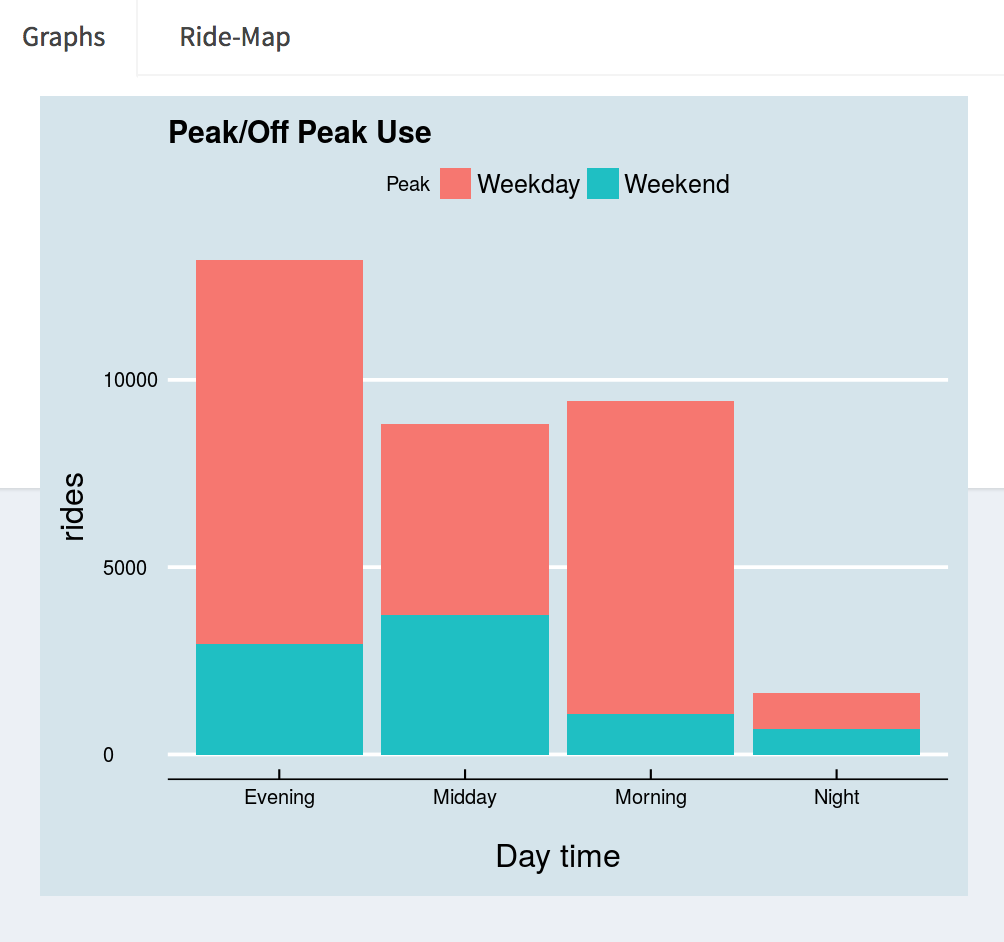 Bar Chart: Showing the different use between weekdays and weekend.

I was also interested in the most popular routes in Jersey City. Knowing already that the PATH station areas are popular start and end station I wanted to see where people most likely go from there.

While I focused on the stations as well as the routes I also explored the people who ride the bike. The graphs can be found on my app website.

After exploring the data set I was surprised about the fact that Citi Bikes aren't used more frequently during the night. As I mentioned before my hometown has a similar set up and everyone used the stadtbikes to ride home after going out at night.

The fact that the amount of use is significantly smaller in the mornings during the weekends makes sense because people sleep in compared to the week when they have to go to work. The agglomeration around the PATH station was also foreseeable due to the fact that a lot of people commute into the City for work and other activities. Because there is a 30 minutes time limit for free riding the rides are shorter than expected. If the User ID were trackable Citi Bike could see if people ride from one station to the other.

Seeing the most common routes the NYC Department of Transportation can use the data to improve those areas with better bike paths as well as traffic light for bikes and extra left turn lanes on the street.

With more time I would have explored the balanced station use – if one station is more used as a start station than an end station in which case there might not always be bikes available and the have to be transported there. I would have also liked to add the weather for each day to see if temperature and rain impact the amount of people who ride the bikes.

My app can be found here. And the code is available on my GitHub.