Data shows that digital content creation is a roughly $12B industry and is estimated to be growing at a 12% annual rate. Platforms such as YouTube lower the threshold for individuals to get involved in the industry, and the creation of content by small businesses and individuals has never been greater than it is now. The Trending list on YouTube is a potentially helpful tool for small content creators to get their work noticed by a wider audience.

This project looks into what characteristics videos that make this list share, with the hope to better inform content creators looking to make this list and have YouTube market their videos for them. An app was built in R using Shiny to walk creators through the findings of the project and to provide advice regarding how to make content that has a better chance of making the list.

The Trending list on Youtube aims to surface videos that a wide range of viewers would find interesting. It highlights videos that (1) are appealing to a wide range of viewers, (2) are not misleading, clickbaity or sensational, (3) capture the breadth of what's happening on YouTube and in the world, and (4) showcase a diversity of creators. Some trends are predictable, like a new song from a popular artist or a new movie trailer. Others are surprising, like a viral video.

The Trending list displays the same list of trending videos in each country to all users, providing a wide range of potential new viewers to creators who make the list. Gaining exposure to new viewers and effectively having YouTube market your videos for you are major benefits of making the Trending list for a creator. 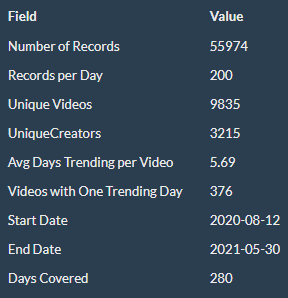 Figure 1. Table with Basic Descriptors of the Data Used.

Exploratory data analysis showed the median views for a video at the time it made the trending list to be 1.14M views. The distribution for views per video was found to be log-normal, similar to the distributions for likes and comments per video. 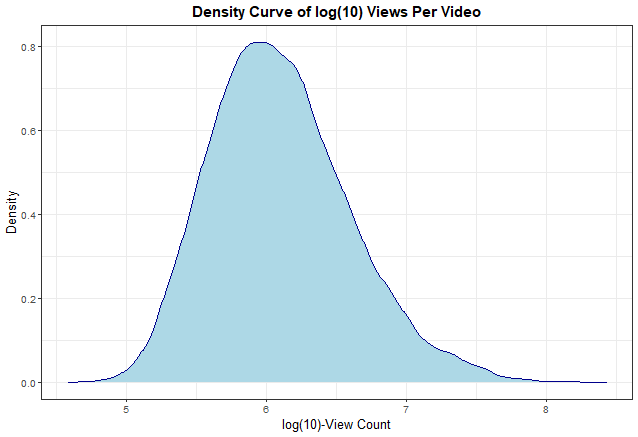 Figure 2. Distribution of Likes per Video on the Trending List.

A ratio of 1.0 meant that every day the video trended for was consecutive, while a ratio of 0.5 means the video was on the Trending list for an average of every other day during the time period it was Trending. The majority of videos had a consecutiveness of 1.0, and the vast majority had a ratio of over 0.75. This means that once a video drops off the trending list for a day or two, its run is likely over. 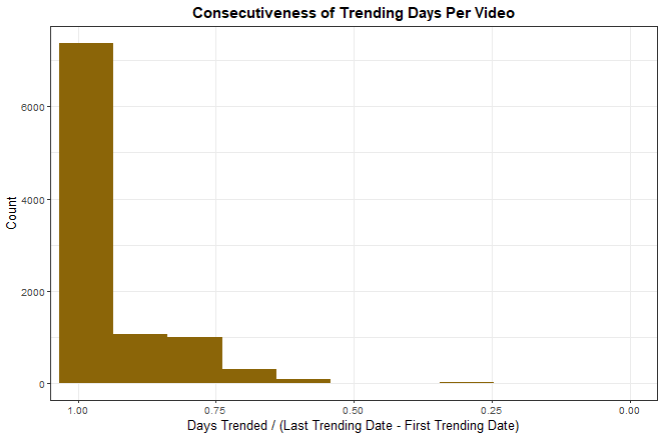 The Shiny app associated with this project dedicated a whole section to this EDA. One tab included basic data statistics described above. Another tab contained the visualizations for this data exploration, showing one graph at a time, selectable via a dropdown menu, as well as a short paragraph explaining the importance of each graph.

The main analysis of this project dealt with four different features, each getting its own sub-section in the related Shiny app. The first feature was video title, where distributions of length in characters, word count, and proportion of letters capitalized were examined and graphed. The title of a video plays a big role in whether a viewer will choose to spend time with a video and is an important consideration for content creators.

Data on the Video Titles

The median video that made the Trending list had a length of 51 characters, and it is recommended that creators keep their titles between 30-80 characters to produce content with similar traits to previously Trending videos. It should be noted there is a sharp decline in Trending list appearances at the 100-character level, potentially from YouTube actively selecting against videos with very long titles. 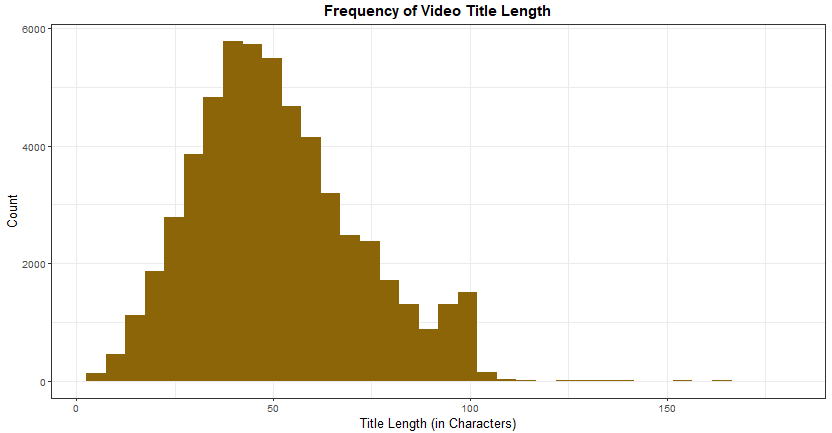 The second aspect of the video title analyzed in this project was the title's word count. The median word count of a video title was eight words, and it is recommended creators keep their titles to between 4-15 words, keeping in mind the previous character length recommendation.

The third and final video title trait investigated was the proportion of capital letters in a video's title. The median proportion was 0.21. This makes sense, since capitalizing the first letter of each word in a title (assuming the average length of a word in the English language of 5.1 characters, as per Wolfram Alpha) would lead to an average ratio of 0.19.

Evidently, the majority of videos that make the Trending list have the first letter of each word n the title capitalized. There is also a long tail of higher capitalization ratios, indicating that some videos have significantly higher numbers of capital letters. It is recommended that creators capitalize the first letter of every word in their video titles, and optionally can capitalize further characters for emphasis. 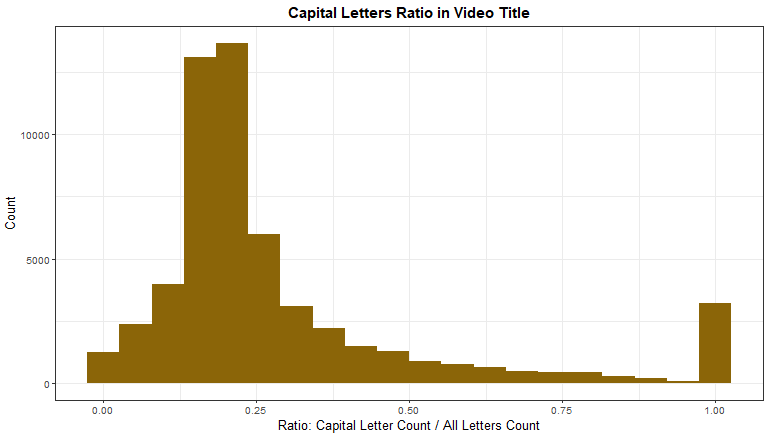 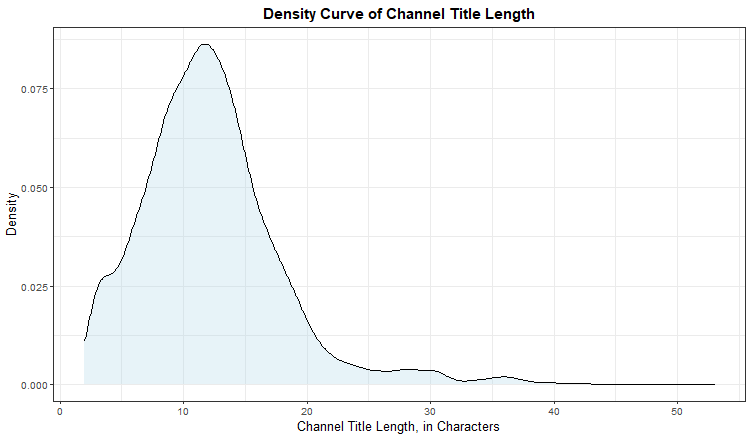 The third feature explored in this project was the category feature. At the time of posting a video, the creator had to select one of 15 categories as the 'genre' of the video. The proportion of total videos on the trending list that represented each category was investigated. The categories of Music, Entertainment, and Gaming were found to be the most overrepresented, while Pets & Animals, Travel & Events, and Nonprofits & Activism were found to be the most underrepresented. 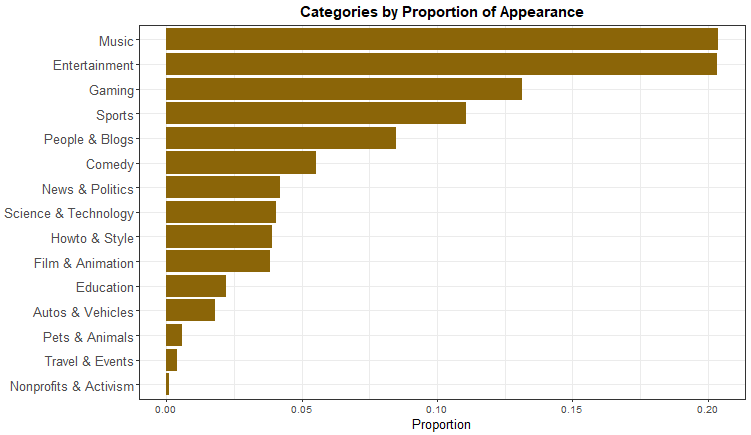 Figure 7. Categories by Proportion of Appearance.

Last but not least, the user-inputted tags field was analyzed. This is a rather unstructured feature, with the user able to input any tag they wanted, and any number of tags. To bring structure to this, the most frequently occurring tag across all records was kept for each video and recorded as the 'top tag' field.

No conclusive recommendations were made regarding the tags, other than to use them. Over 85% of the videos that made the trending list used tags. An interactive bar chart of tags by category was created for the Shiny App, allowing app users to explore the most frequently used tags in each category or in a combination of categories. This is an area where creators can explore the use of tags in Trending videos, even if there are no recommendations made regarding them in the project. 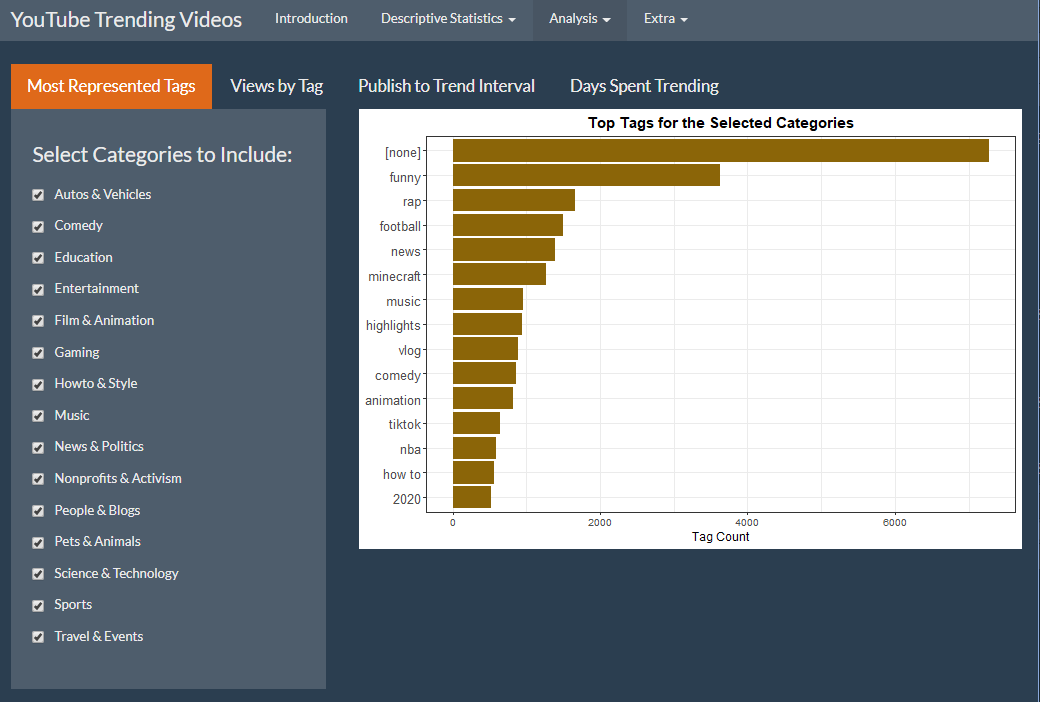 Figure 8. Screenshot of the Interactive Tags Chart in the Shiny App.

The aforementioned tags field is a prime area for future development. Due to time constraints in the project this field was analyzed using rather simplistic methods. Using more complicated natural language processing techniques such as Latent Dirichlet Allocation could lead to useful insights into tag use for videos on the Trending list.

The more I worked with this data, the more limiting I found it to be. The fact that I only have data for videos that made the Trending list, and none for a control of videos that didn't make the list, or even a random sample of all videos, means I could not compare the differences between videos that made the list and videos that didn't. Another limit of the data is that the views, likes, and comments do not represent the popularity of videos with certain characteristics. They represent the level of those metrics needed to hit the Trending list for the videos.

I would like to work with YouTube data with view counts, likes, and comments collected for videos that both made and didn't make the Trending list a set amount of time after publishing, maybe between one month and one year (or multiple timeframes). This would allow me to compare the popularity of videos with different characteristics. With this additional data I would likely be able to find more useful advice for content creators on YouTube.