Among the policy proposals that the new administration and Congress are likely to consider are changes affecting Social Security and Medicare. It is often argued that Americans are living longer and raising the eligibility age for Social Security and Medicare is a logical, necessary, and fair. But does the data show U.S. today have a consistent, higher life expectancy, regardless of income, geography, or gender?

This question is worth examining not only because of the possible changes to retirement benefits, but also because it can help to uncover social differences worthy of additional inquiry. Data compiled by the Health Inequality Project and available online provides an ideal starting point for this inquiry.

As with other life expectancy figures discussed here, the figures in this graph are race-adjusted, with differences in life expectancy associated with race or ethnicity, which warrant additional research, having been removed. 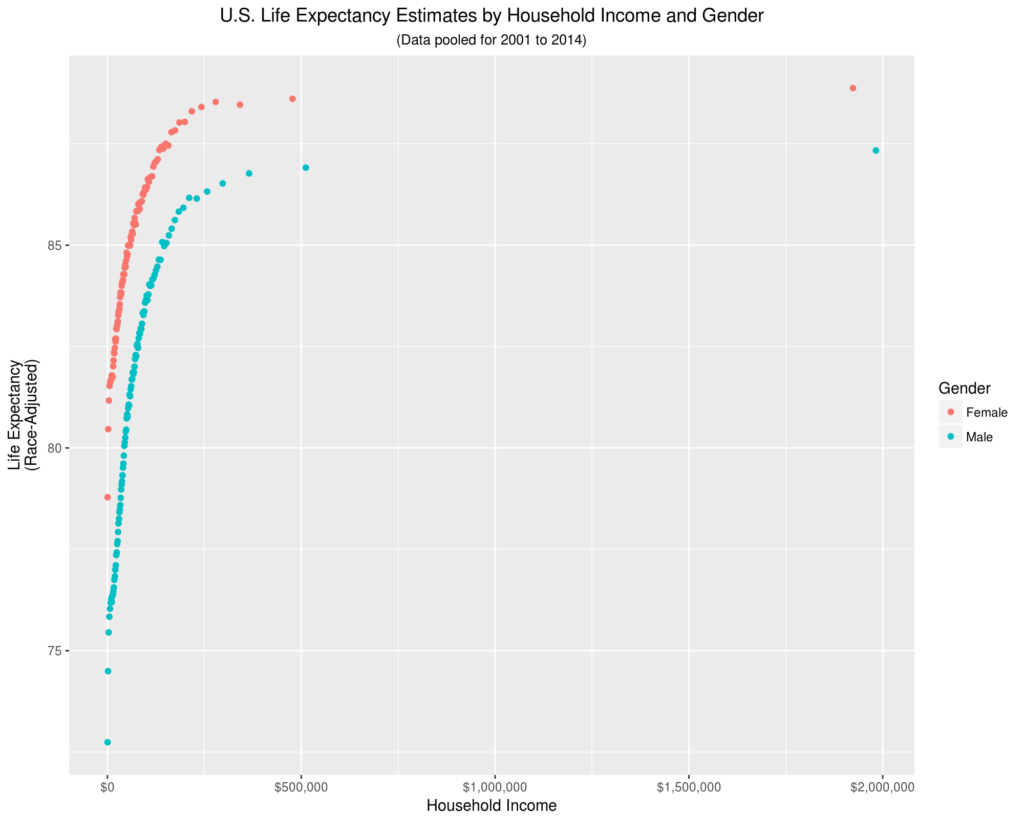 With incomes concentrated near the low end of the graph, there is sparse data available above about $250,000 in household income. A logarithmic scale for income may be more revealing.

The next graph updates the previous one by transforming household income on a log scale. 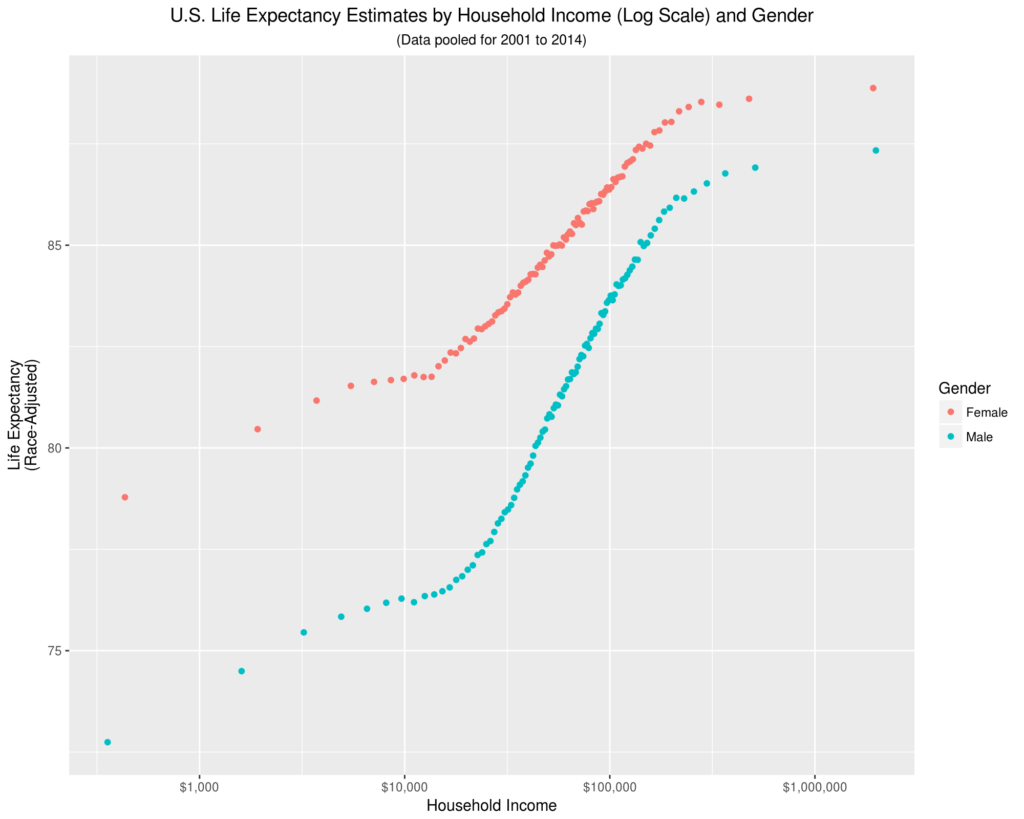 For the bulk of observations, which are found between roughly $20,000 and $200,000, it appears that a linear model could approximate the relationship well. However, the slope would be steeper for men than for women. Note that the slopes are lower at the lowest incomes and especially at the highest incomes, compared with the middle income range. It appears that statements about a rising U.S. life expectancy require greater nuance given the wide range of life expectancies and their relationship with income levels and gender.

If life expectancy varies by household income level and gender at the national level, are these patterns consistent from state to state, or are they more pronounced in some states or regions? One way to evaluate this is a graph that compares the life expectancy of people in the bottom quartile of household income with those in the top quartile of income in the same state. To isolate the influence of gender, two graphs can be used to illustrate the patterns for women and men separately, and they can then be compared.

Hawaii serves as an example below and is indicated by an annotation. As the note on the graph explains, the vertical distance from the diagonal line to the point above it represents 4.3 years of life expectancy that women in the lowest income quartile lose compared with their high-income peers in the state. 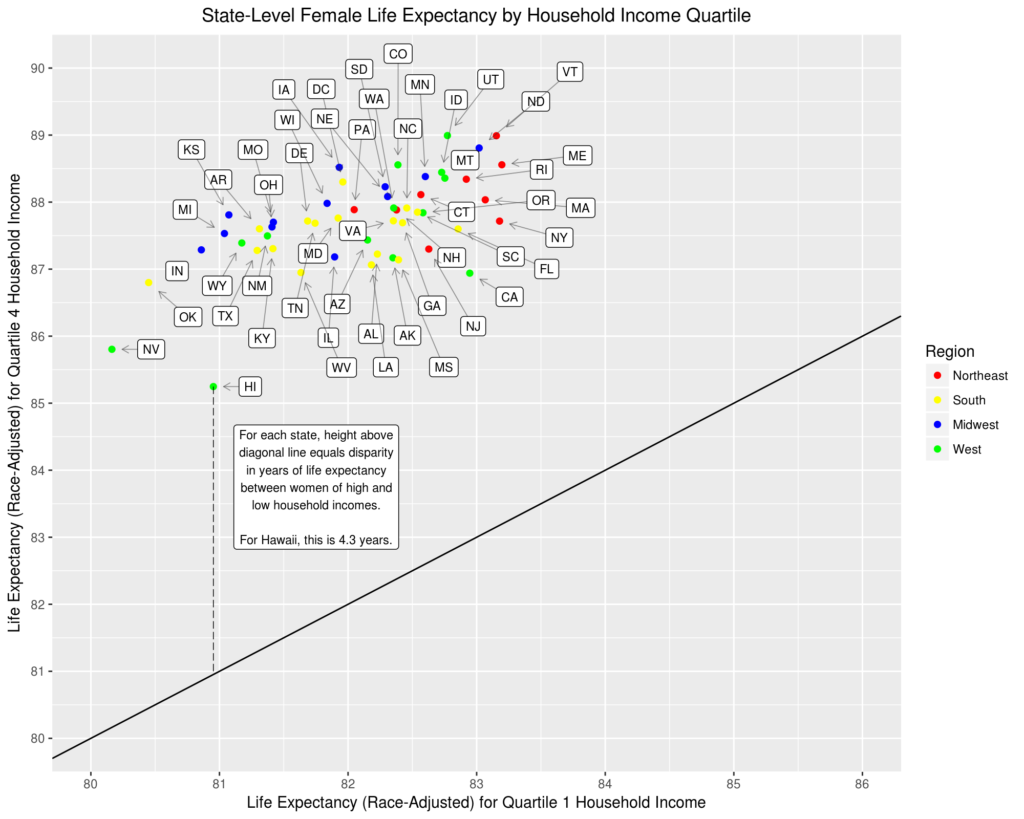 There are considerable differences among states in the life expectancies of women of both income groups and some variation in the number of years lost by women in the lower income group.

Regional differences, though not clear-cut, may also be present. States in the Northeast, shown in red, are clustered mostly on the right due to higher life expectancies for lower income women than most other states. In addition, states in the Midwest, indicated in blue, appear to be a bit farther from the diagonal line than other states, meaning that the disparity in female life expectancy by income seems to be greater there. Further research would be needed to tell whether other groupings of states, such as according to shared policies or leading industries, rather than geography, would be more meaningful.

Male life expectancy by the state for first and fourth quartiles of household income reveals an even larger gap. The dashed line that connects the point representing Indiana to the diagonal line means that lower income men in that state have a life expectancy that is 9.7 years less than their high-income counterparts. 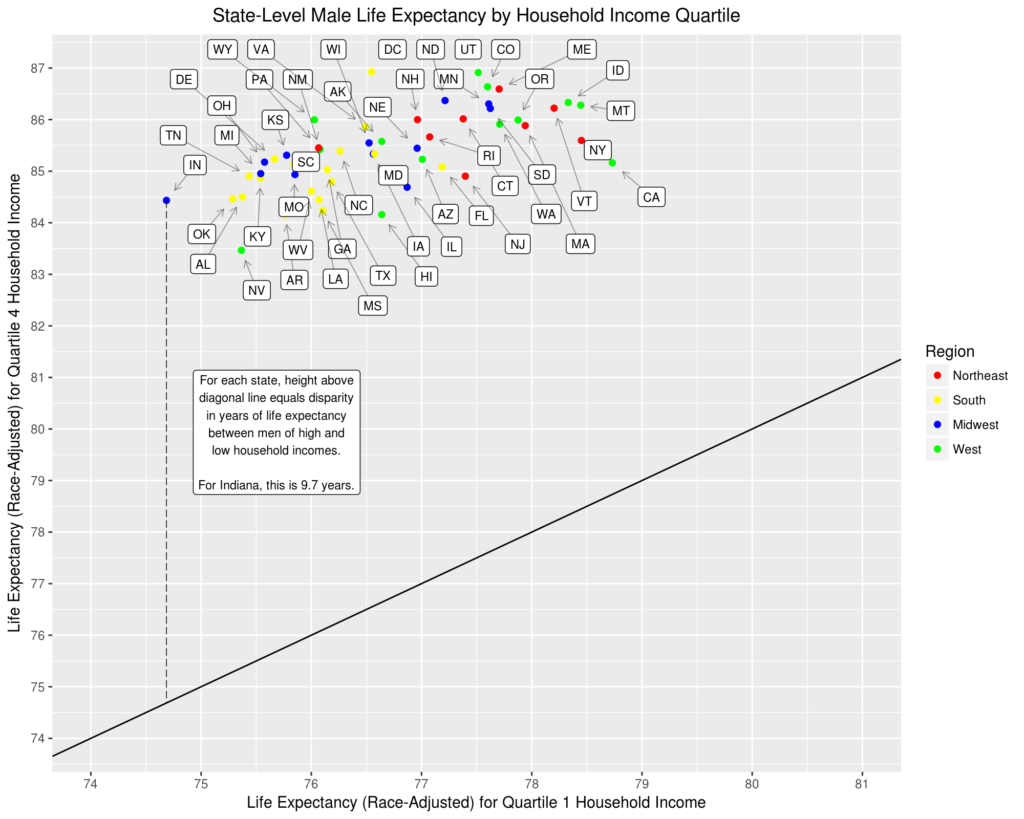 There still appear to be some regional patterns, such as higher life expectancies for men with first quartile household income in most Northeastern states, but they seem to be weaker than for women.

The number of years of life expectancy that women lose out on if they are in the first quartile of household income instead of the fourth can also be seen on a map. The closer states are to blue in this graph, the smaller the gap in life expectancy between women of the first and fourth income quartiles. Clearly, states such as California and New York have significantly smaller disparities than others, such as Kansas. 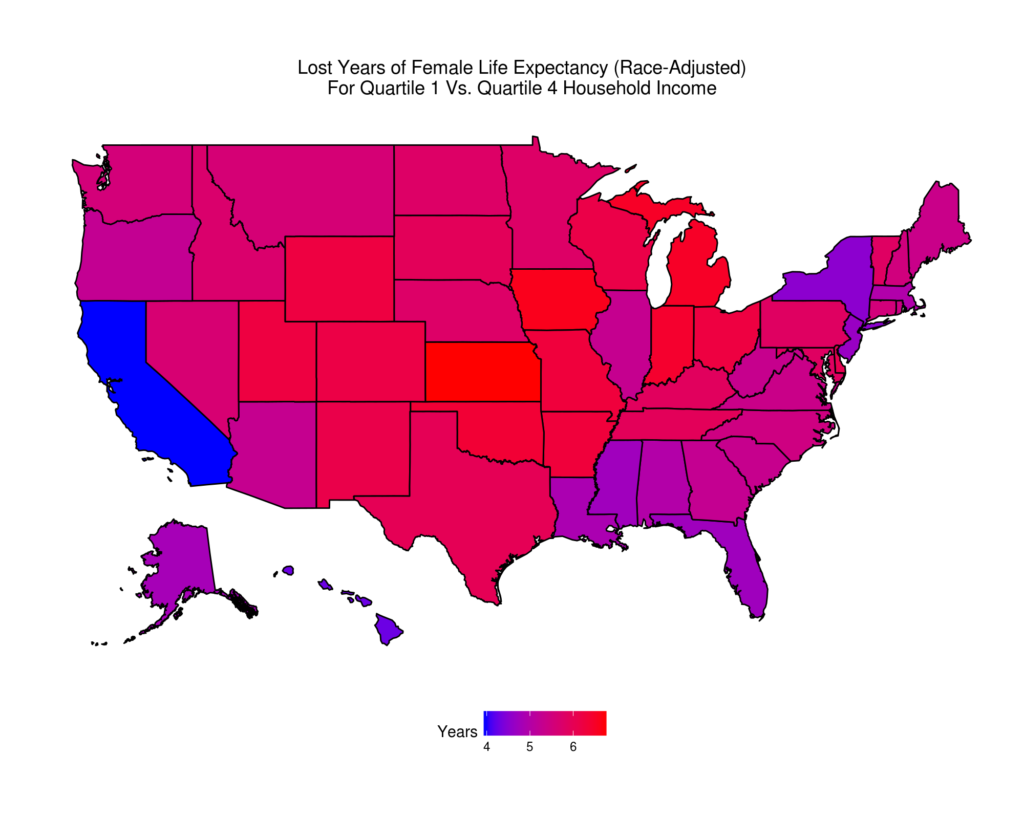 Similar patterns can be seen for men. However, note that the scale is different because the disparity is much higher overall. 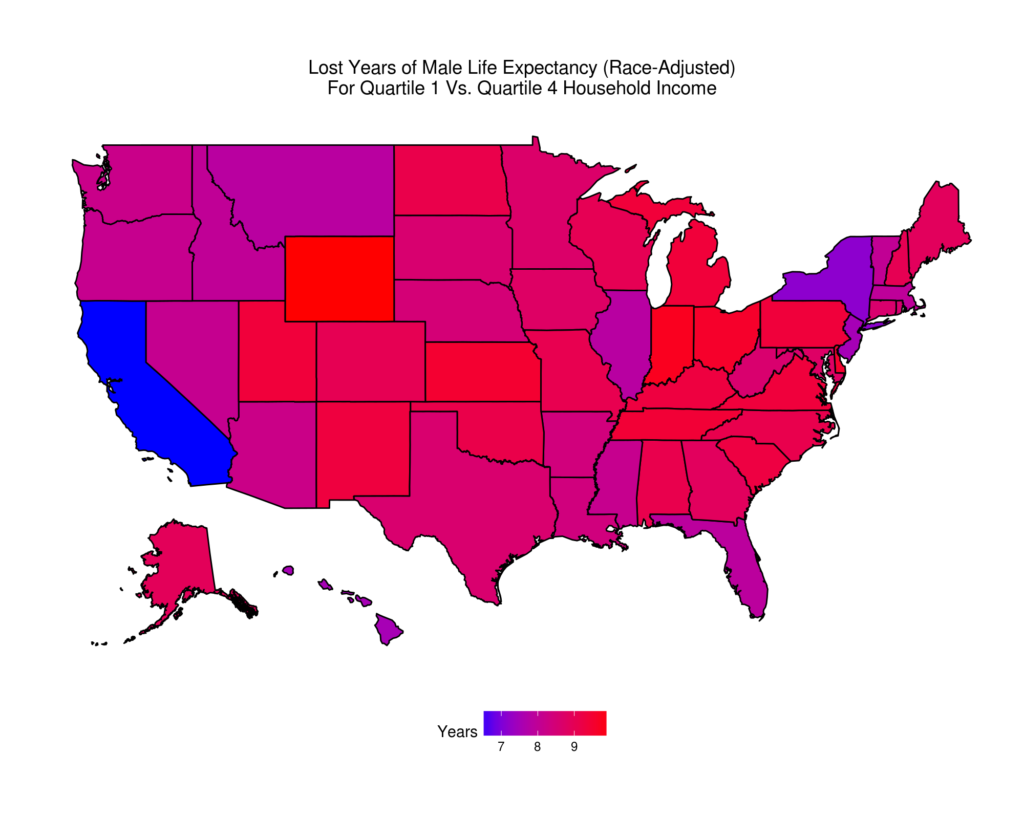 Again, California and New York appear to have smaller gaps, but their gaps for men are comparable to the largest gaps of any state for women.

For states such as Wyoming and Indiana, lower income men lose almost a decade of life compared with higher income men.

Over the period from 2001 to 2014, female life expectancy has been rising. This is the case at both the 25th and 75th percentile of household income. However, there remains a large gap in life expectancy between the lower and upper income groups, depicted as the shaded area between the lines, that is persistent, if not growing. 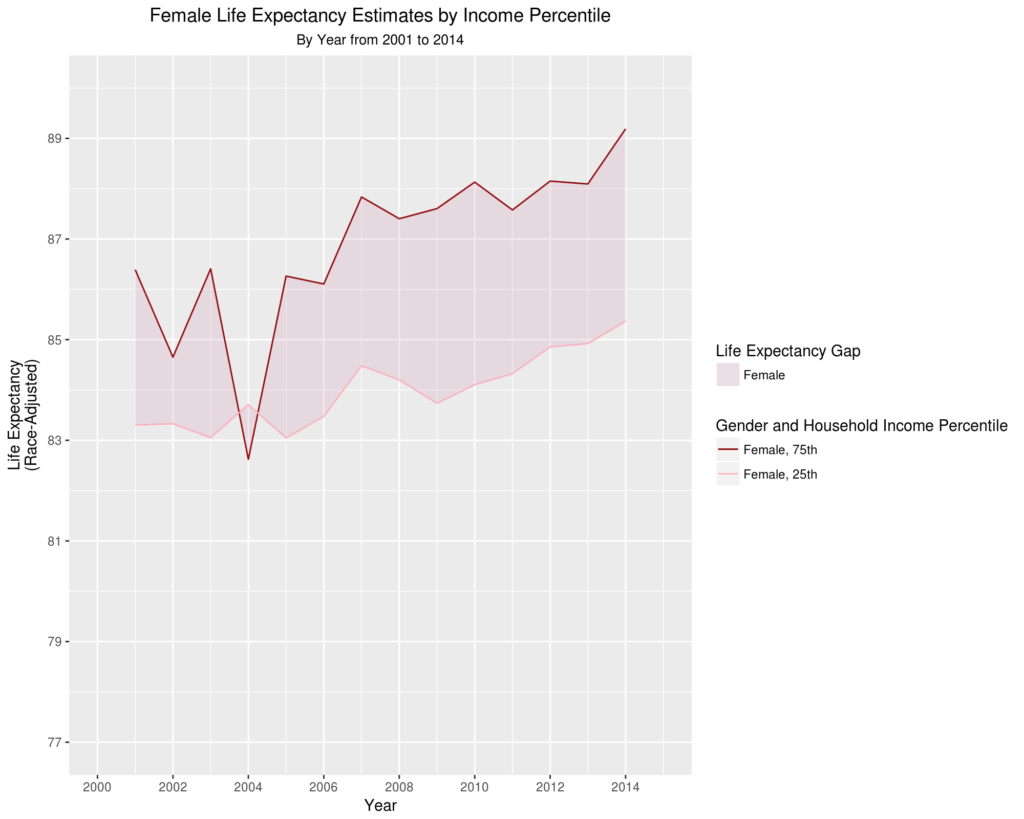 Some additional research into the reversal that appears in 2004 would be appropriate. Life expectancy figures around 86 years are found at percentiles just above and just below 75th percentile. It is not clear whether the anomaly is an erroneous entry or has another explanation.

For male life expectancy, the trend is similar, with increases for both first and fourth income quartiles, and a large gap remaining. For men, the gap appears to be widening due to the modest rise in life expectancy for lower income men. 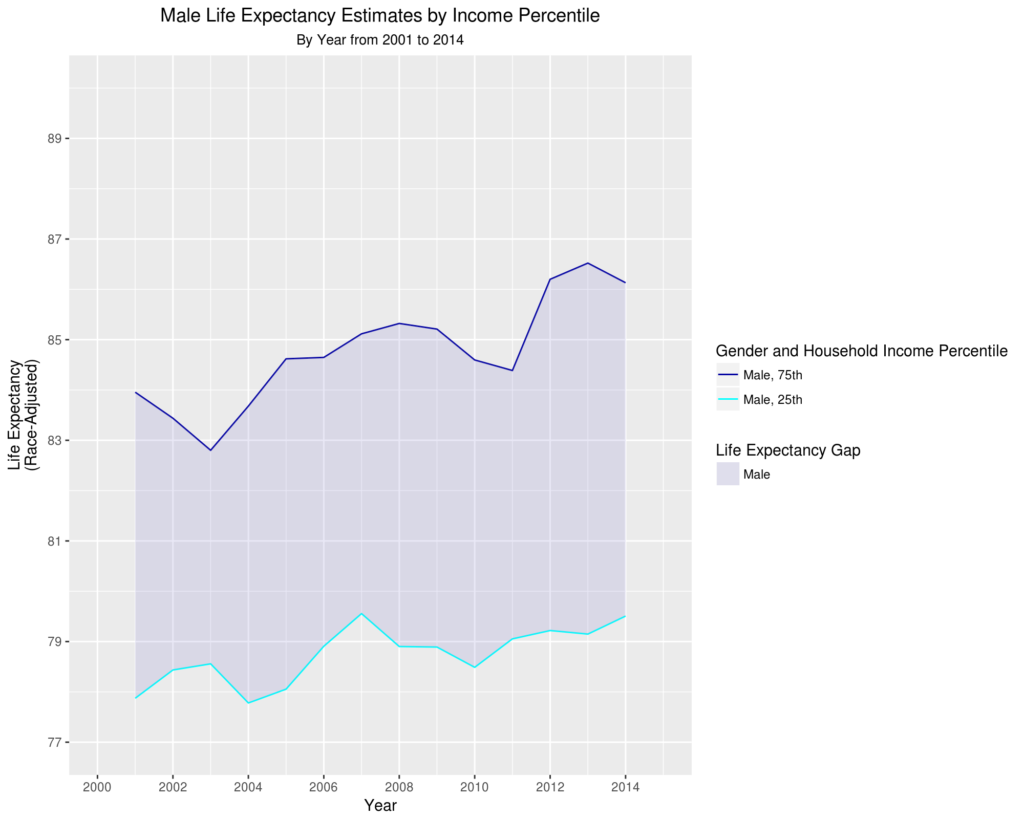 How do the trends for men and women compare? 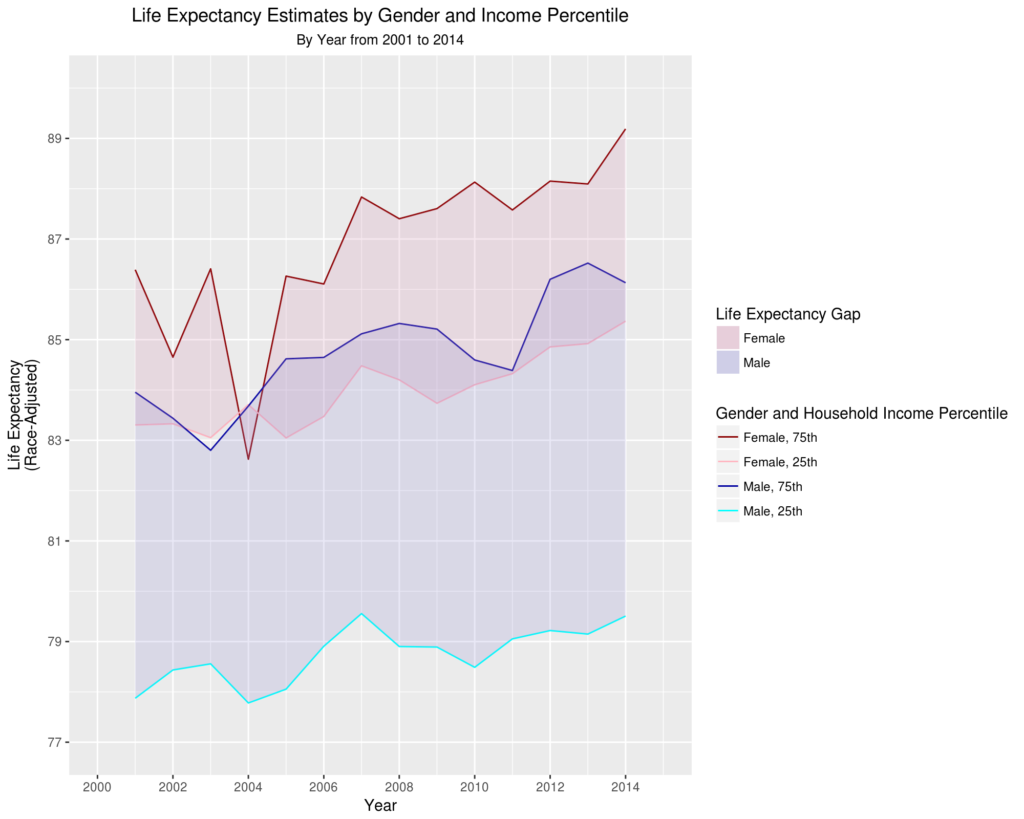 It is clear that a story that states that life expectancy has now reached a high level for all Americans is far too simple to serve as a basis for public policy. Differences in life expectancy by income level, gender, and state or region are pronounced. Further analysis is needed to inform the policy-making discourse.

Other questions are also worth exploring. These include: