This project aims to survey and observe some simple but interesting patterns based on the data collected for used cars on the U.S. market. As a car enthusiast and an owner of several cars (not simultaneous ownership; I am not rich), I feel I can give my insight, from the consumer side, to talk about what those patterns mean.

The raw data set is scraped (using the Python Scrapy suite) from www.carfax.com, which is like an Amazon.com for used cars. This website lists detailed information on cars/dealers. I decided to make this website the source of my data because it is reputable, comprehensive (you can virtually search for any cars at all U.S. zip codes) and provides clean-cut and well-formatted information. The website helps you locate the dealers who have cars you're interested in, which is information from seller side.

But recall I said I surveyed patterns from the consumer side. Is that a contradiction? No. The logic is this: Dealers of used cars stock vehicles based on their years of understanding of consumer needs/preferences so as to maximize sales volume. Thus, their stock information reflects consumers’ choices fairly accurately. I even feel their information is more objective than, say, from certain car review magazines whose ratings about cars are often strongly opinionated (e.g., based on magazine editors’ personal preference, catering to automobile manufacturer’s sponsorship, etc.).

Prior to doing this project, I browsed what previous NYC-DSA alumni did for web-scraping projects and found one project authored by someone who was also enthusiastic about cars (quote: “I am a big car fan”). He looked at patterns from a different angle: comparing the East versus West Coast used-cars markets from seller side. His project resonated with me and inspired my selection of topics.

The following figure shows a typical search result from www.carfax.com. The key information to be scraped is listed as the boxed text in the figure. To locate those key pieces of information, the reader can look at the red-boxed texts in the lower part of the figure (to the right of Audi A6). 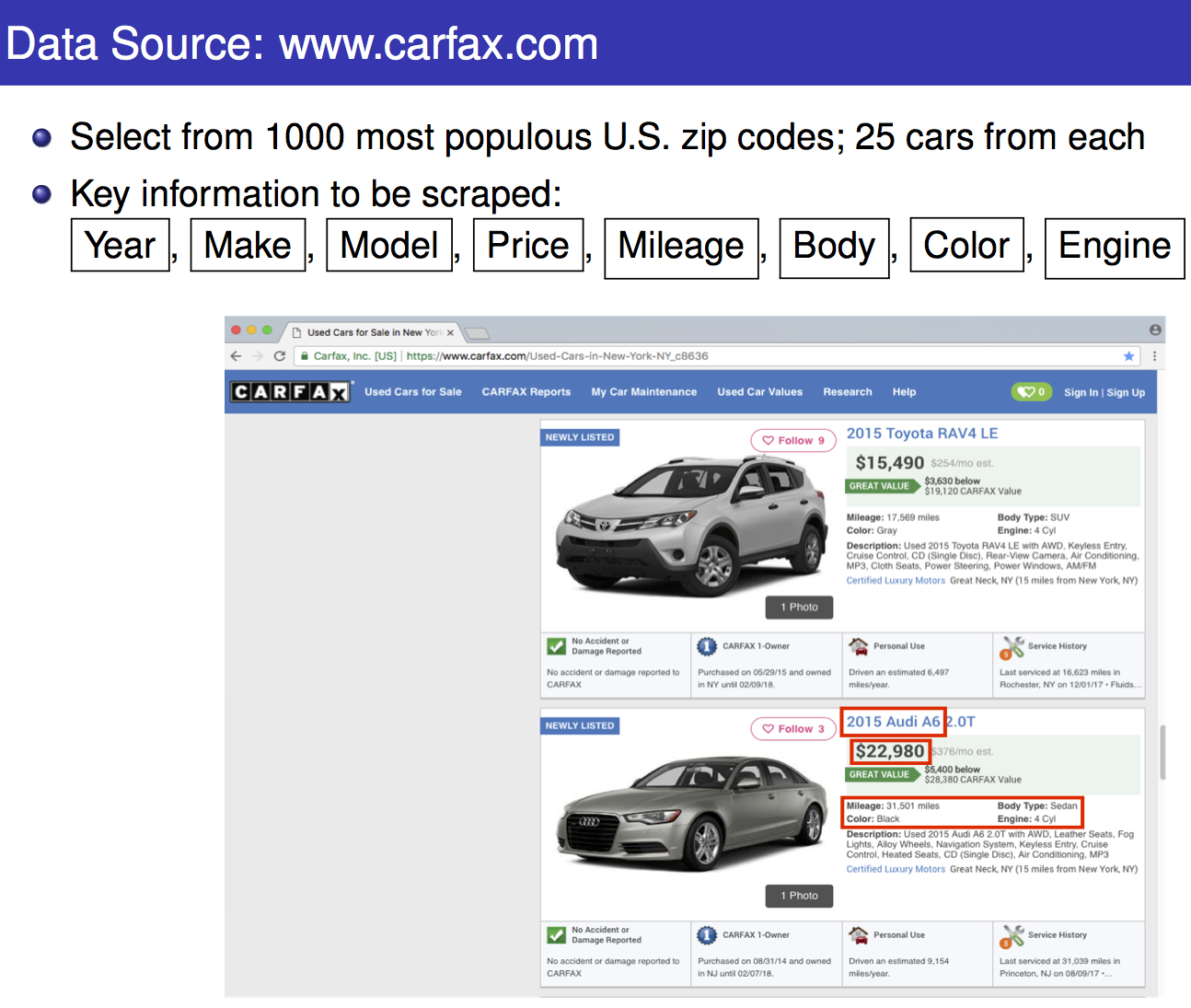 After obtaining a raw data set (about 20000 plus vehicles), I added the cars’ manufacturer country information (e.g.: Audi: Germany). I also did a simple filtering:

based on practical consideration as well as my own experience. For example, I used mileage rather than years to judge the age of a car. One of the reasons for that is dealers rarely stock cars used more than 12 years anyway.

The following figure consists of pictures of the two Audi A4s I have owned, along with the odometer reading for each. I show them to convince you (the reader) that I -- despite being a pedantic math person -- do know something about cars and the above filtering consideration, as well as ensuing discussion, are based on my own experience. 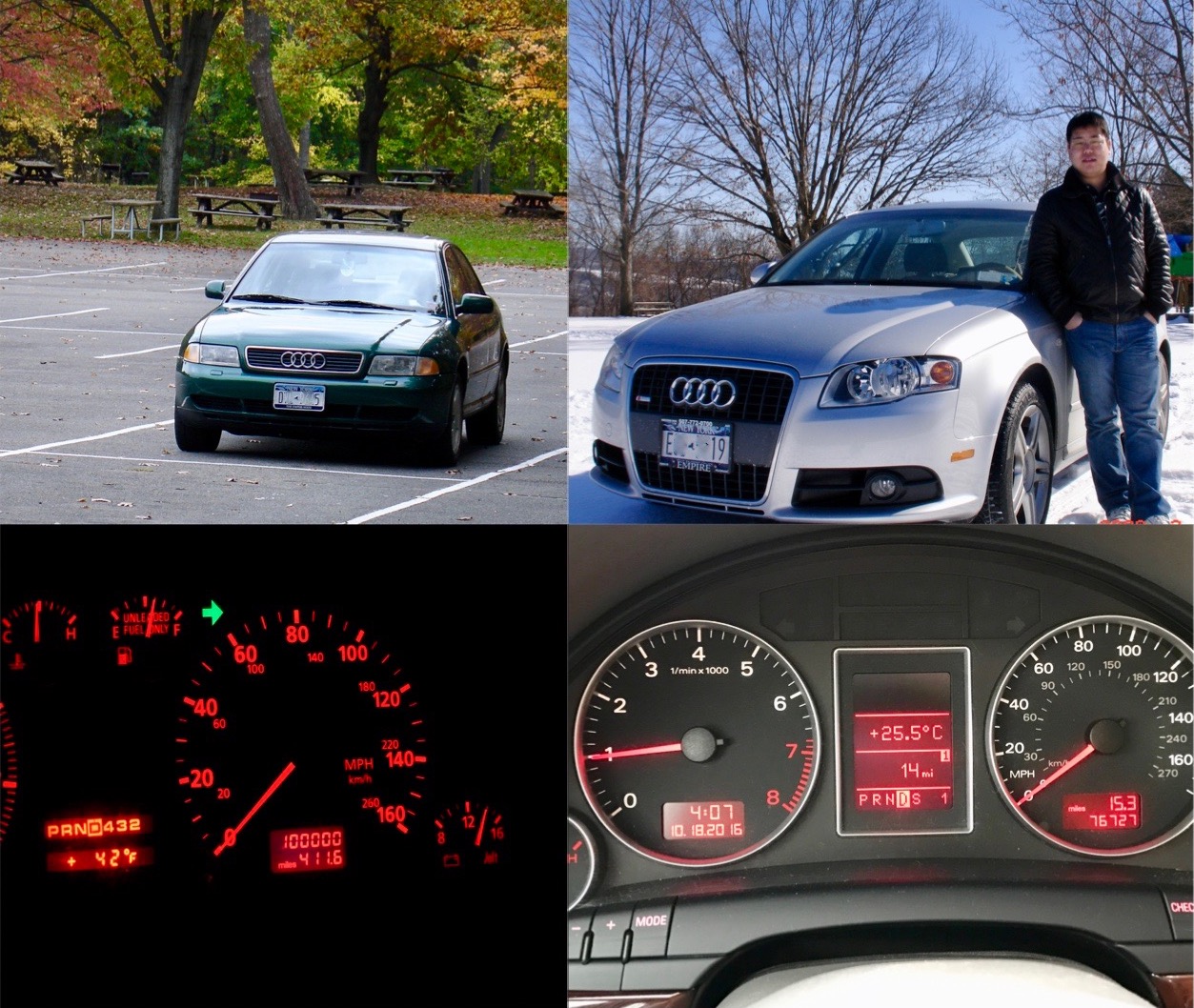 After some data cleaning with the scraped information, we have a table shown as follows (here it displays information for ten randomly selected vehicles). You can also see that the table consists of 17,358 records. From this structured data table, we are ready to do statistics and make further observations. 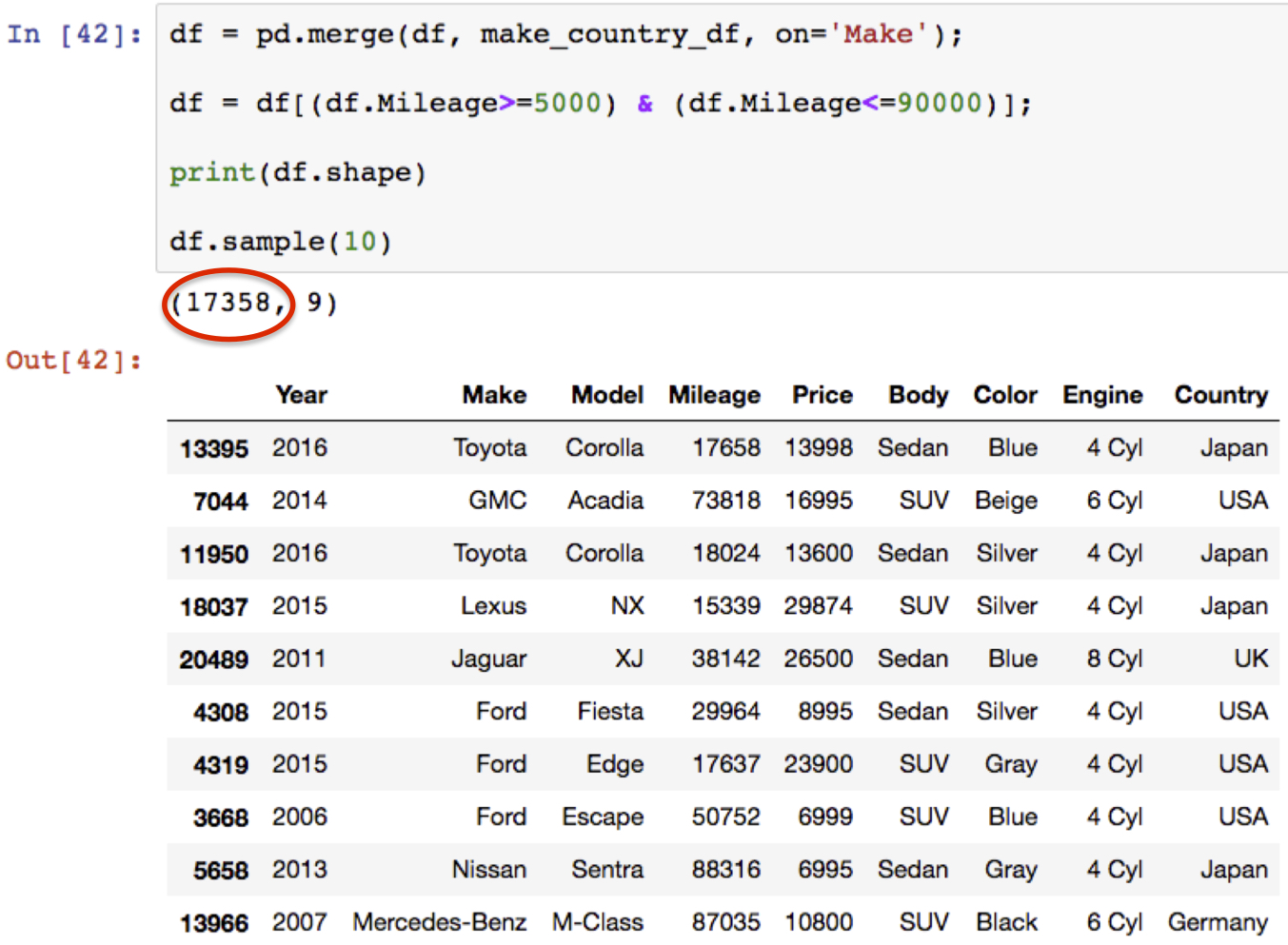 We can do a lot of summary statistics once data is structured as the table shown above, which any modern computational software (R, Python, Matlab, etc.) can do quickly. Let us focus on some simple but interesting observations. The first set of observations shows several top fives in terms of volumes available on market and arranged by descending order according to respective volumes. See the following table: 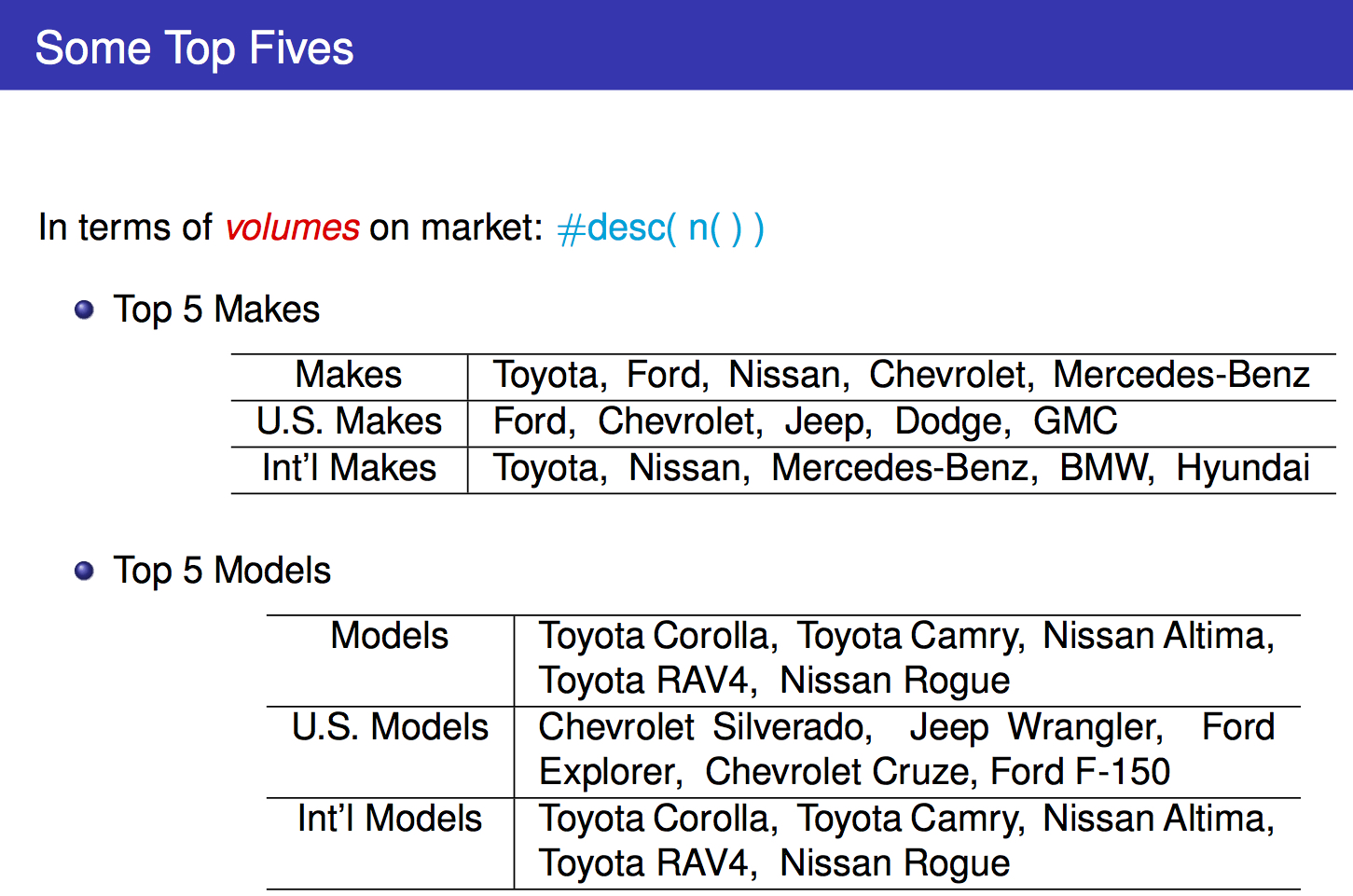 Alternatively, we can use bar charts to visualize the above information (volumes), but since here it is the text information (car makes/models) that matters most, we put the information in text tables directly. Here are some other interesting top fives: 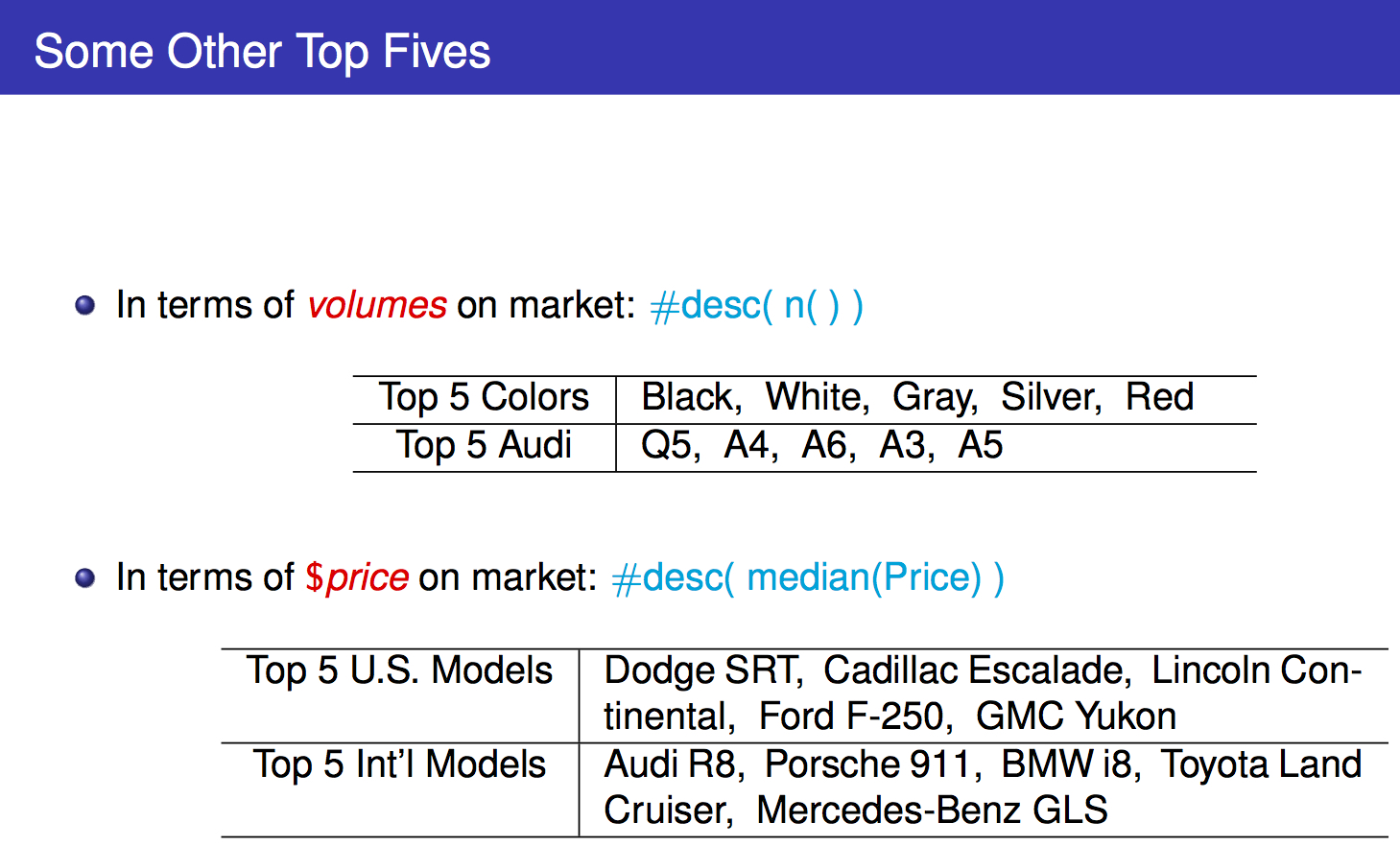 What do we observe? At least two things: (1) Japanese cars are very competitive on U.S. used cars market. (2) The sale strength of U.S. made vehicles is in the large sized pick-ups and SUVs.

3. An Interesting Observation: Comparing Three Models of the Same Class

Usually, more interesting observation is made by doing comparisons. Here we compare three models of the same class: Audi A4, BMW 3-series, and Mercedes-Benz C-class. They are all made in Germany, compact, entry-level premium cars that are designed for personal rather than business use. As you read along, you will find we can even infer about the three car makers’ different design philosophies to target different categories of consumers. But let us observe some simple distributions to begin with: 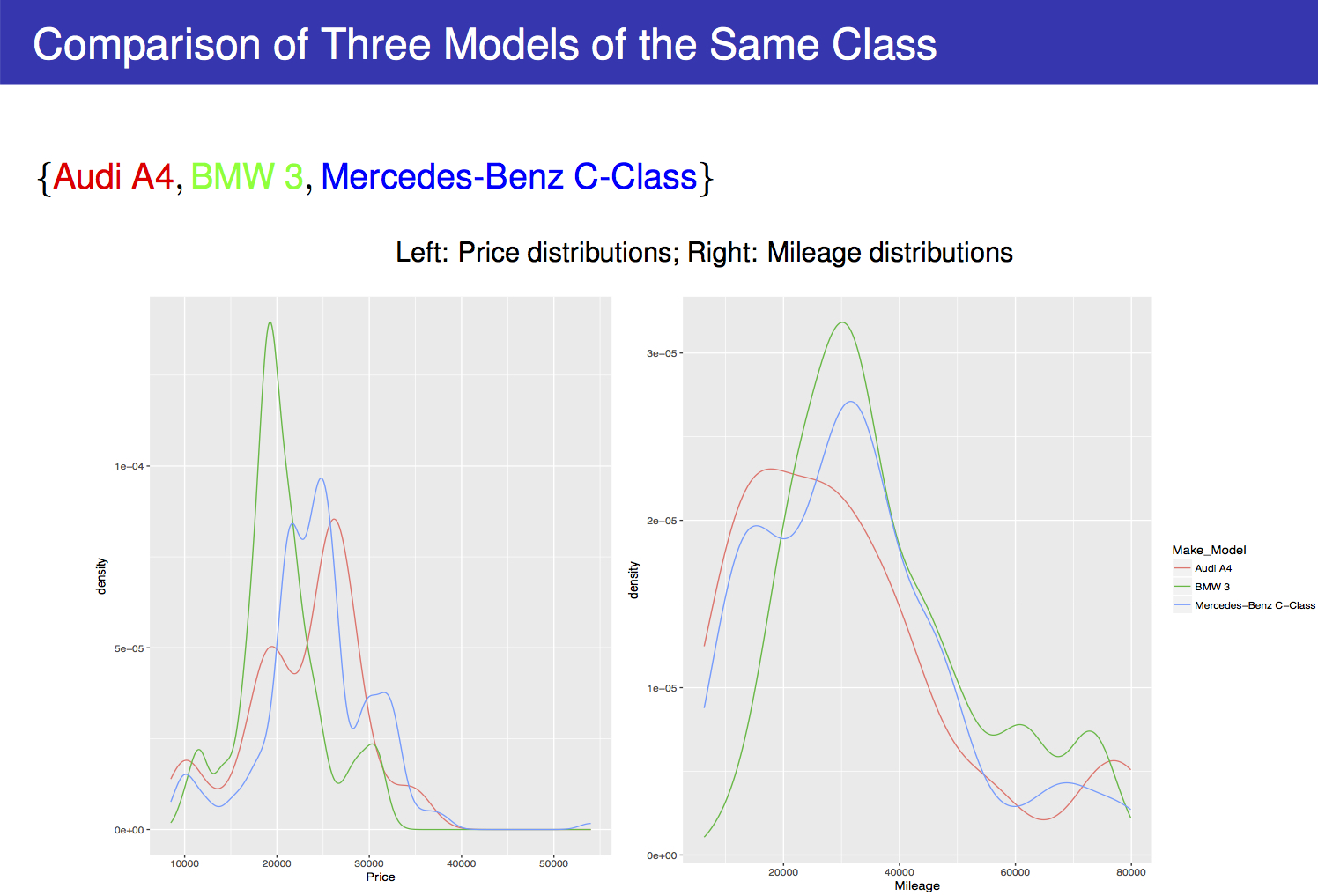 It seems there is nothing more to be observed, but, behold, when we compute a simple quantity

and plot its distributions for the three car models, that yields a distinct and interesting pattern, as shown in the following figure. 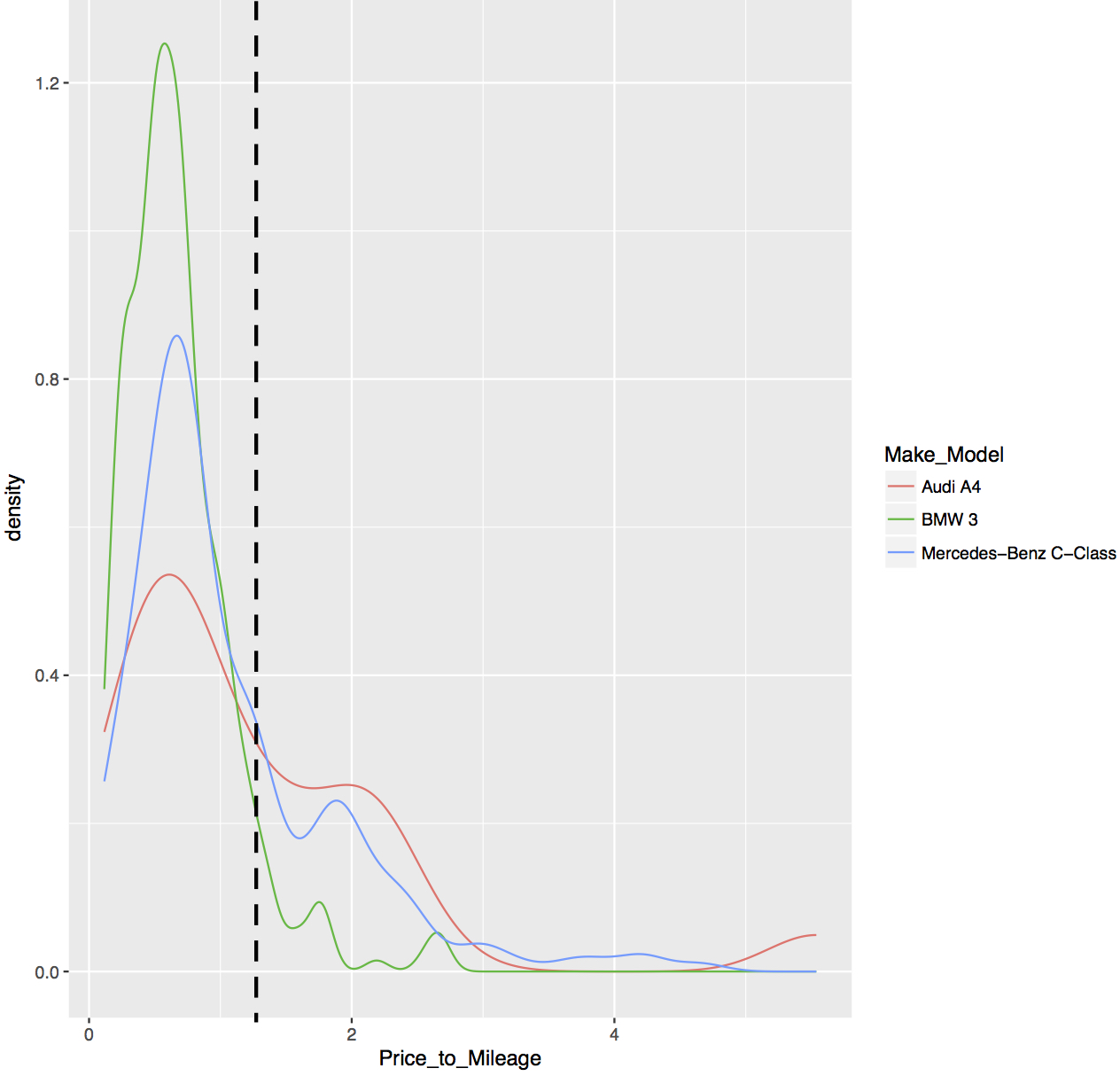 The above inference is not surprising. Since I was in high school, I have noticed that BMW likes to advertise its “sheer driving pleasure” (quote, which also includes the pleasure of winning attentions on the street). But for Audi, its commercials focus on Audi’s calmness and steadiness, such as how it drives on ice steadily like a heavy ship. In fact, I think BMW’s philosophy is to make a car like a vanguard jet-plane, whereas Audi’s philosophy is to make a car like a stately ship.

For Mercedes-Benz, it takes a balanced philosophy, and, to be honest, I feel it does not care about making C-class that much; it merely introduced its C-class so as not to completely lose a foothold in this particular class of market. As a result, you can see Mercedes-Benz C-class ranks in the middle in both categories.

It is amazing to me that how such a simple calculation of objective and cold-blooded numbers (price/mileage) can reveal something that is subjective and human-related:

Important: It may seem that other readers need some domain knowledge (about cars here) to make useful observations. But the point is, as long as a data analyst can use his/her domain knowledge to invent metrics to bring about revealing patterns (fancier term is: feature engineering), the readers or co-workers or clients will notice those patterns and do their research to further. For example, I am not familiar with Japanese cars of the class discussed in this section (Acura/Infiniti/Lexus), but I can conduct a similar study as given above and infer about those cars’ characteristics and their car makers’ design philosophies.

The higher the ratio years/mileage, the gentler a car has been used. The reason is simple: Consider two cars A and B, both of which have been used for 5 years, but Car A has been driven for 5k miles and Car B for 50k miles. Obviously, Car A has been used more gently than Car B. Accordingly, I consider this ratio (years/mileage) an index for the Gentleness of Usage.

The answer is generally no, as long as we did not simply take linear combination of old features to derive new features. Everyone with elementary physics knowledge knows that from distance and time (two features), we can compute a new feature speed = distance/time. But (the new feature) speed provides a new dimension of information about the state of motion which cannot be known from (old feature) distance or time alone. In formal mathematical analogy: An integrand and its derivative in general have no direct proportionality.

The correlations between various quantities are shown in the following heat map. Note that the calculations are done based on all the vehicles from the data table (17358 in total). 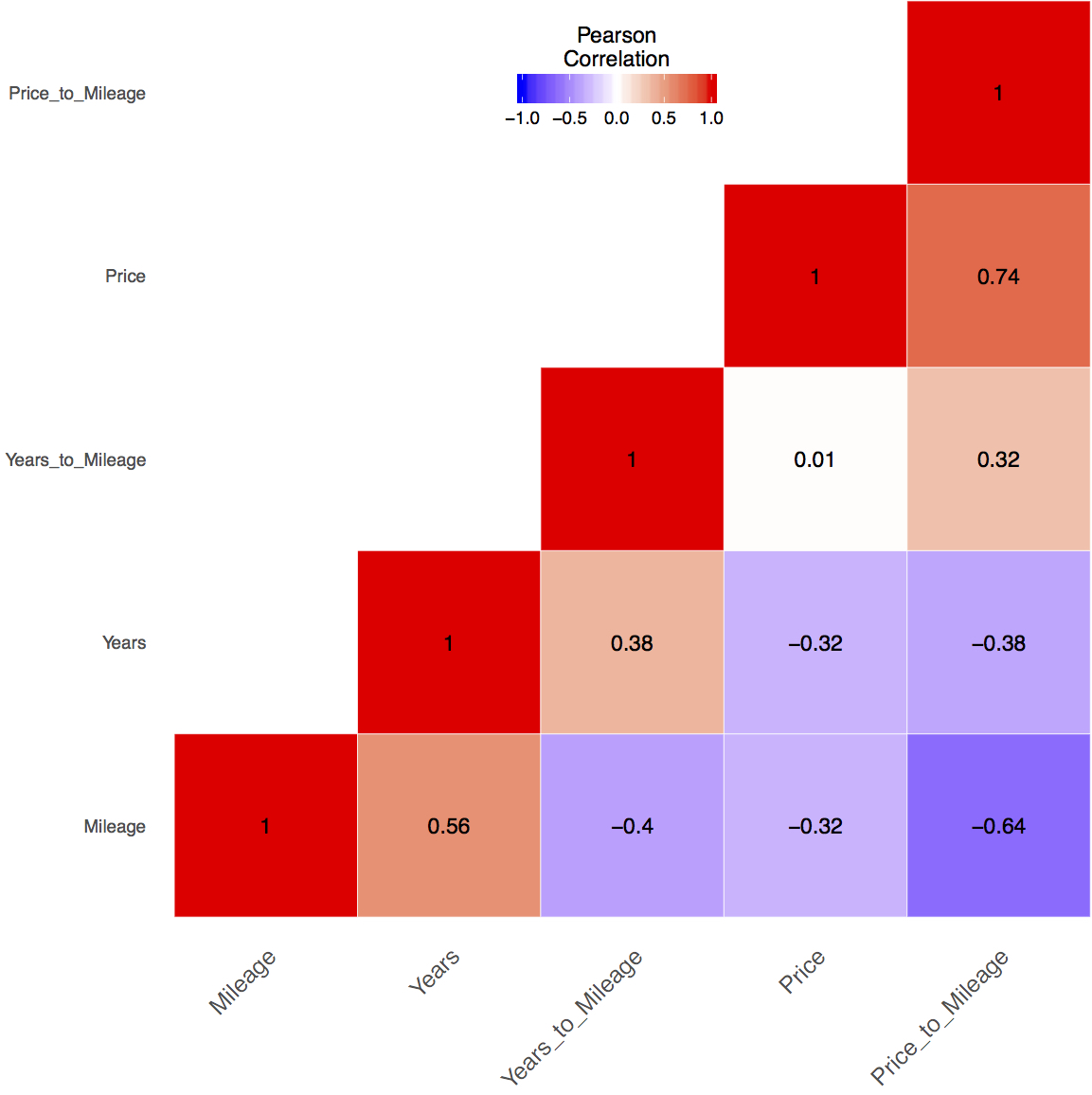 Some of the correlations are obvious. For example, the price of used cars is negatively correlated (-0.32) to mileage. Some of the correlations are interesting. For example, the ratio price/mileage (recall: it indicates consumer preference or car’s personality) is positively related (+0.32) to the ratio years/mileage (recall: it indicates the gentleness of usage of a car). This is understandable; consumers who prefer low-profile cars tend to drive more gently. But there are also some non-obvious correlations. I will leave it to the readers to find surprising correlations.

This is merely a preliminary survey of the U.S. used-car market. A lot of improvements can be made in the future:

The lists for improvement can be endless, but the goal remains discovering patterns that are simple to understand and make use of. To that end, I would recommend talking to car dealers, because they know what are the actual, interesting, and worthwhile business questions that call for analysis and answers. In other words, they have real domain knowledge on which to base the data analytics.

Trained in math and physics. Rarely thought one day he would do business analytics when he was in school (for example, in what universe would knowledge in complex variables or Fourier transform or electromagnetic theory or quantum mechanics...
View all posts by James Chen >