This has been an exciting season in the NBA. Throughout the season, the headlines on the NBA site read “Warriors having the best start to a season”, “Lebron James becoming the youngest player to hit the 26,000 points milestone”, “Russell Westbrook having the most triple-doubles in the past 50 years”, “Steph Curry shooting over 400 3-pointers”, and of course the “Golden State Warriors obtaining the best winning ratio of a season”. And there were many more. This lead me to create a Shiny app see what to other data records are there that can be broken in the future.

I located a dataset from Putdat that had NBA stats from 1947 – 2015. The dataset contained all the teams that ever existed from 1947 even though the team was discontinued. However the stats of the teams that changed names or changed location were preserved under the new name.

The Wins graph (below) shows the top ten records of teams from 1947 through 2015 in both the seasons and the playoffs. The first graph shows the top ratios of wins to total games and using the slider, we can adjust the range from one to ten (five is shown in the screenshot). For instance (before the Golden State Warriors stunning record of 73-9), the best record was the Chicago Bulls record of 72 wins and 10 losses for a winning percentage of 88% in 1996. The Bulls also managed to maintain the best winning ratio in the season for the following year. 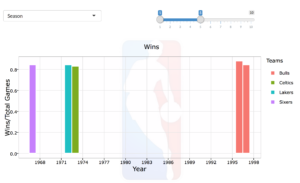 On the next tab, Team, team stats are also available for both the season and the playoffs. Sticking with our Bulls’ example, we get these two graphs: 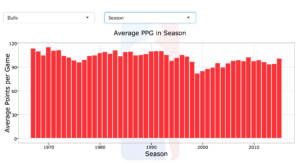 The first graph (red bar graph) shows the points per game every year since the start of their franchise. It is interesting to see that the Bulls’ best record in ’96 was not their highest point performance. This can apply that they had a great balance between offense and defense that helped them win that many games.

The second graph shows the winning ratio split into home and way games. This is the Bulls’ season winning ratio. One last point I want to make about Bulls is that after the Michael Jordan era, the Bulls’ faced a sharp decline in points and wins in general. It was not until the signing of Derrick Rose that some light started shining in the windy city. It is actually interesting to see that majority of the teams win more home games than away. This just proves that fans are part of the team. There are definitely a few exceptions. The Timberwolves had an away winning percentage of 32% and their home was 27%.

With more time, I will be able to create more graphs that demonstrate more current records. Also it was interesting to see trends through the graphs. When I saw them, I wanted to know why this was the case or which player made an impact that year. For instance I saw that Bulls had a phenomenal record in the year 1996. Not only would I want to be able to click on the bar for 1996 and see Jordan, Pippen, and Rodman along with their respective stats. I would also like to find a dataset with individual stats and include them into this Shiny app.