Does Kiva Help Countries Where Credit is Most Needed?

Using a dataset publicly available on Kaggle, I wanted to determine if loans made through the crowdfunded micro lending platform, Kiva, were available to borrowers in countries where such credit might be most needed.

In the course of my research, I came across several key points necessary to keep in mind. First, I compared countries relative health by using the Global Multidimensional Poverty Index (MPI), which examines health, education and living conditions to determine a country’s results. Second, as many people who might be seeking such a loan may not have access to the internet, Kiva relies on field partners in country to assist potential borrowers and post their loans.

The primary feature of my Shiny app is a reactive map that allows users to compare quality of life in a given country and the loans made to borrowers within that country. Users can simply select a category to compare globally, or they can choose to compare several countries at once across all metrics, while also seeing a global average for each category, to contextualize the figures.

The largest number of loans by far went toward borrowers in the Philippines, with Kenya in a distant second. But when comparing the average size of each loan, Kenya drops well below, averaging roughly 455 dollars per borrower. Peru, which has an MPI near .04, (compare to the global average of .18), sees average loans size triple that, at just under 1,400 dollars per borrower. The United States - too developed to have an MPI - received as much in total loans as Peru - more than 30 million dollars. 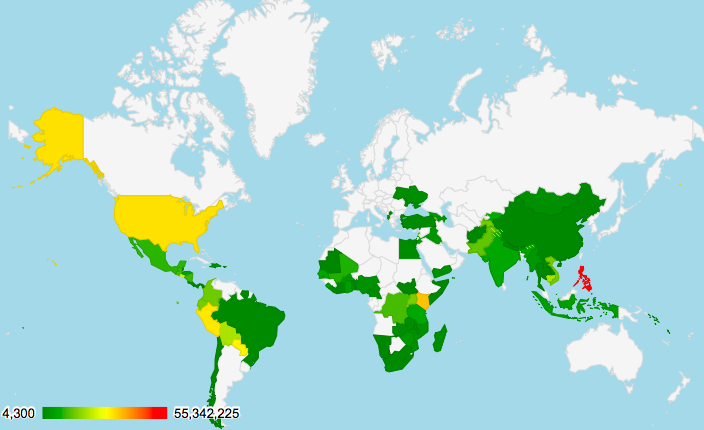 The total sum of loans received in each country

Disconcertingly, countries most in need frequently do not receive a significant number of loans. Afghanistan saw a stunning two borrowers, and South Sudan, the country with the highest MPI at .55, received only 160. By comparison, the Philippines, which has an MPI of .05, received more than 160,000 loans. 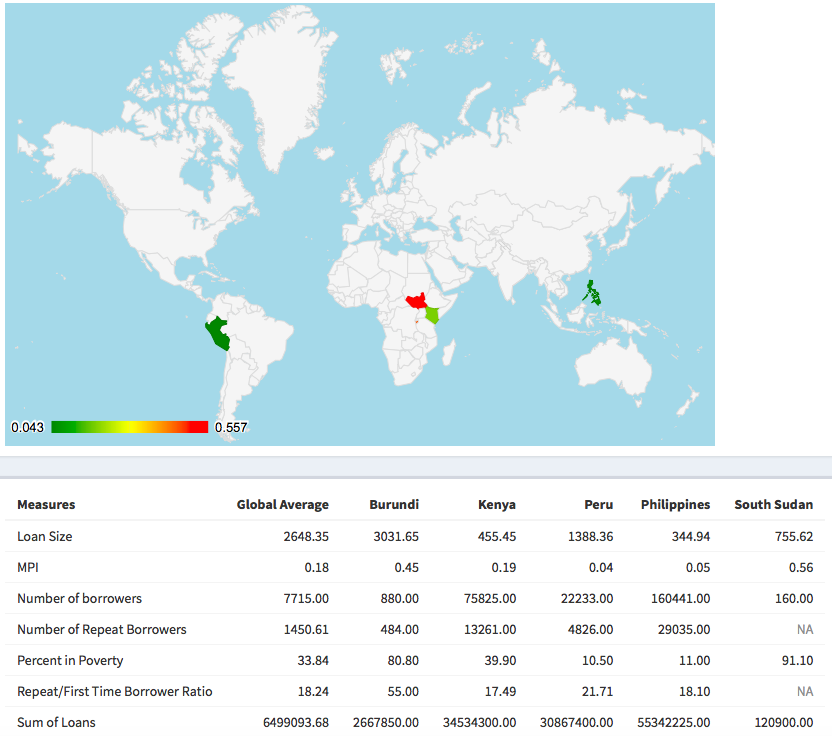 Without further research I can only speculate, but it seems likely that regions like Afghanistan and South Sudan may receive fewer loans primarily because Kiva's field agents are likely to be both less organized and less able to assist potential borrowers in countries facing violent conflicts. The Philippines and Peru have both managed to successfully implement an effective borrowing infrastructure, and should be studied in order to promote further success in other relatively stable regions.

View all posts by Ben Witte >