You have technical skills and you’re confident enough to work as an freelancer? If that’s you, please pay attention.  There’s an online marketplace for digital service, ‘fiverr’ where hundreds of thousands of freelancers around globe come to expose their skills while getting paid. Regardless of the time and location, their work and payment transaction are easily done through fiverr. Fiverr is also where you can come and skill up your professional experiences with real clients from world wide. To help out future entrepreneurs trying to aim for specific technologies or skills to land on the world of freelance, I prepared an analysis of programming and tech freelance market trend with fiverr. 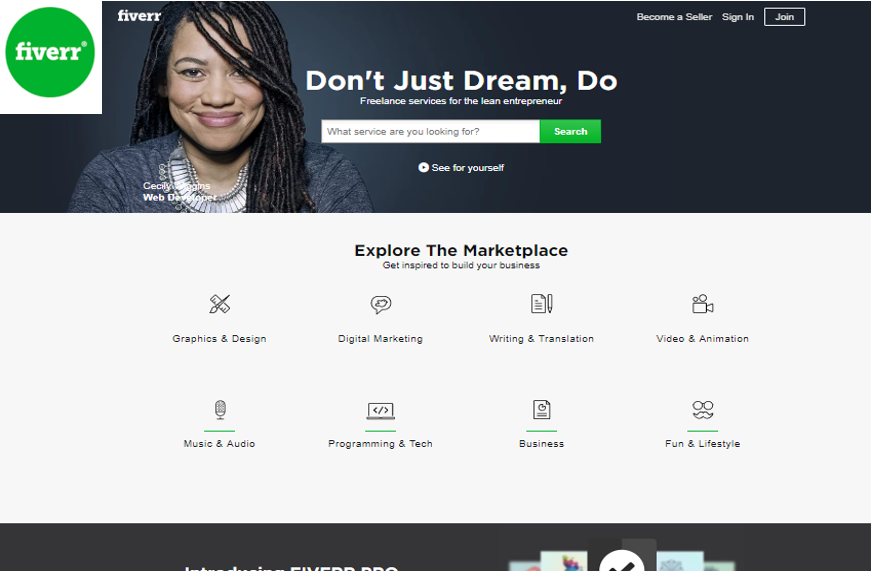 All of these features will help us get some great insights on what, where, who, and how of freelance trend in tech industry. So let’s get started!

First, let’s have a glance at where fiverr’s tech freelancers are servicing from.

As of Feb. 2018, there are nearly 6,200 freelancers located in 101 countries. Narrowing down to the top 15 countries by number of freelancers, we can see that countries with great density are all located in Asia. Pakistan have 2,200 freelancers that dominantly makes up 35% of all freelancer population on fiverr, followed by India (16%), and Bangladesh (9%). From this simple report, thinking positively, we can tell there can be a huge opportunities for tech experts in US to try getting in to the US freelance market. Clients or we tend to trust giving works to someone closer than far by nature because we just feel more safe that way. Though it seems that majority of users are located in Asia, fiverr is an American company and is mostly reached out by clients in US, the people just like us.

Yearly Growth of Freelancers by Tech

‘Chatbot development’ shows more than 3 times increase in 2017 comparing to 2016, and just by looking at 2017 and 2018 of all technologies, Chatbot is in the 4th in 2017, and 1st in 2018. A little insight we can get from this table is that Chatbot development is what people are having interests in and is in demand by clients. Other than the Chatbot, data work shows a large demand. Imagine how much opportunities there will be for you if you build up your additional skills in Chatbot development now.

The trend of technology would not mean much if you’re willing to freelance in those technologies and it’s not reaching a good number of clients or customers. So here’s something we can take a look at. I took number of reviews of each of their work as the number of customers reached as it was the only metric I had to measure popularity of technologies (# of reviews = # of customers reached). So it may not be a very accurate measurement but we could have some idea.

This table below depicts customers demands year by year.  Yes, it’s what clients actually demand to help their works get done but it doesn’t necessarily mean it’s not in demand in tech industry as a whole. The table shows that customers reached for Ecommerce the most until last year and Ecommerce has constant growth of demand since 2010 while Data Analysis, Web Programming, and WordPress were among top technologies around 2014 and 2015 but are dramatically decreased after. One interesting fact we can see here is that in 2010, WordPress were in a tremendous demand, at least more than 10 times than other technologies. 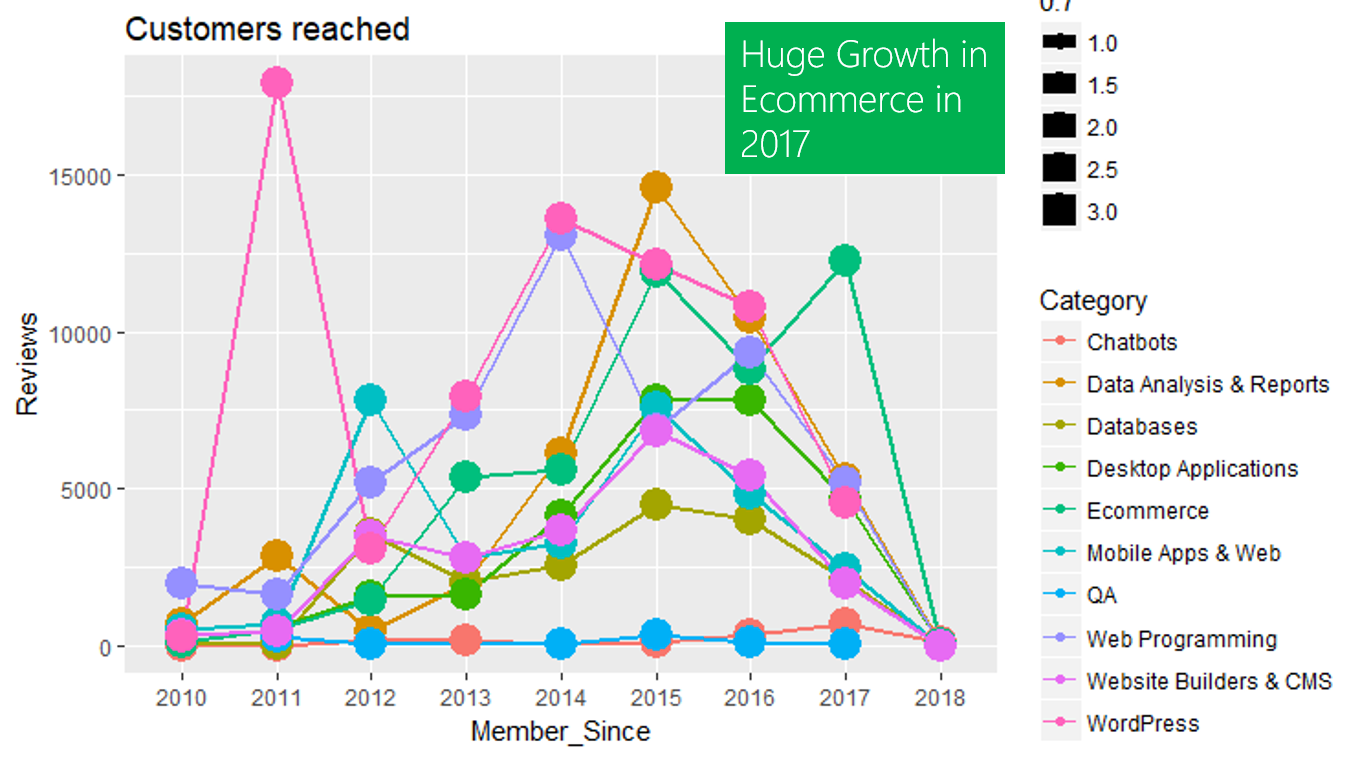 Now we can talk about the real deal, the cost of service. Majority of freelancers charge a starting cost between $5 and $150, and most of them received a star rate close to 5 (from range 1 to 5). There were services that costs a lot higher than $150 up to $1,000 and still received close to 5 rating. It indicates that most works were done properly making customers satisfied. 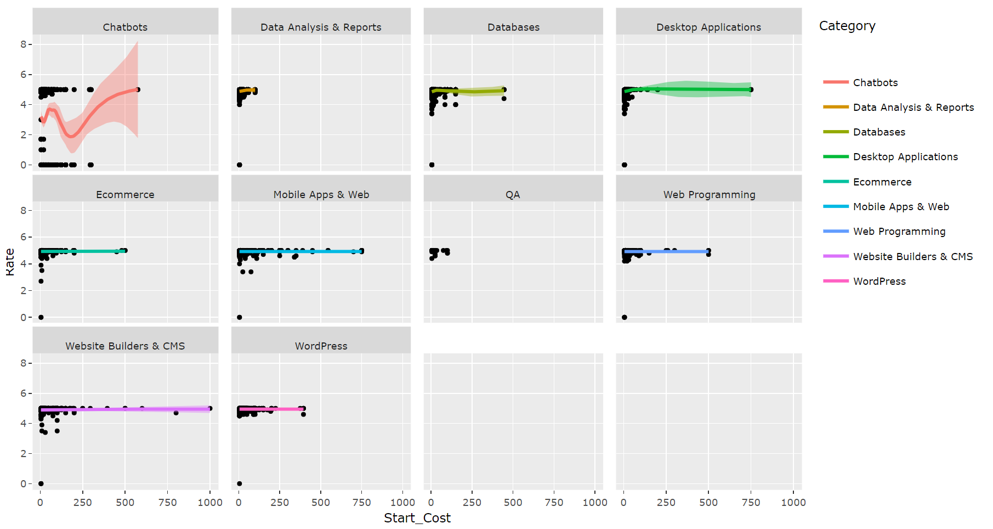 The table below shows more details on a range of starting cost. The technologies with many outliers indicate cost varies by project size or characteristics, and the higher the outliers there are, more complicated projects it can be with the technology. We can imagine Website Building can cost high or low depending on how customers wants customization.

Lastly, I analyzed skills that fiverr’s current freelancers possess in each technology. The standing out words in bold and in large size are the skills appeared most frequently.  Overall, the top skill set they have includes javascript, wordpress, shpify, excel, data, programming, and php. E.g. wordpress and Shopify appeared most frequently in Ecommerce area and we can tell they work on building and maintaining Ecommerce on Shopify using WordPress. 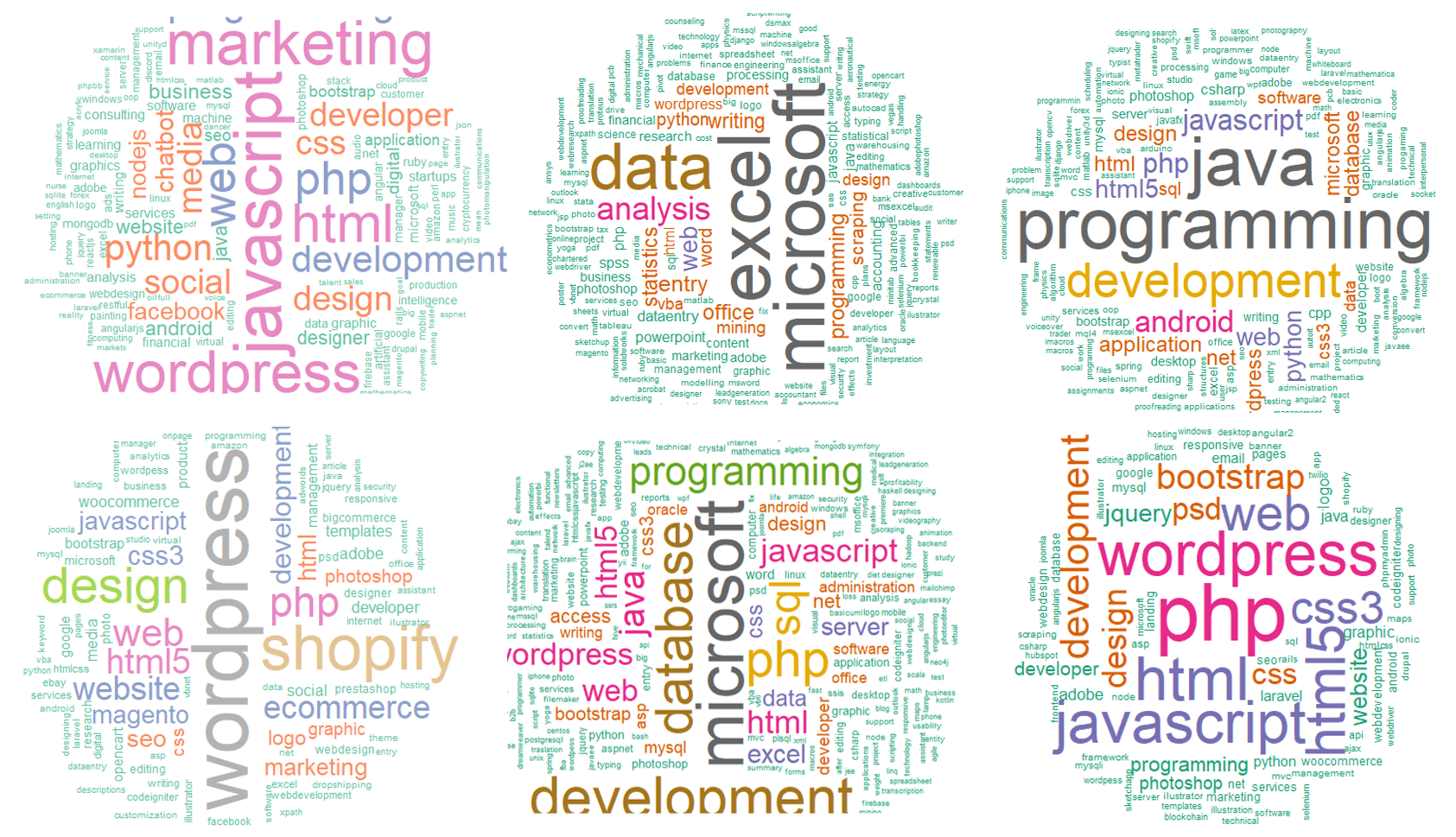 To summarize, I combined all the words regardless of the technologies and extracted top 20 skills possessed by freelancers. HTML is what many of them have followed by wordpress. In terms of programming language, PHP is used mostly followed by Java, SQL, and Python. 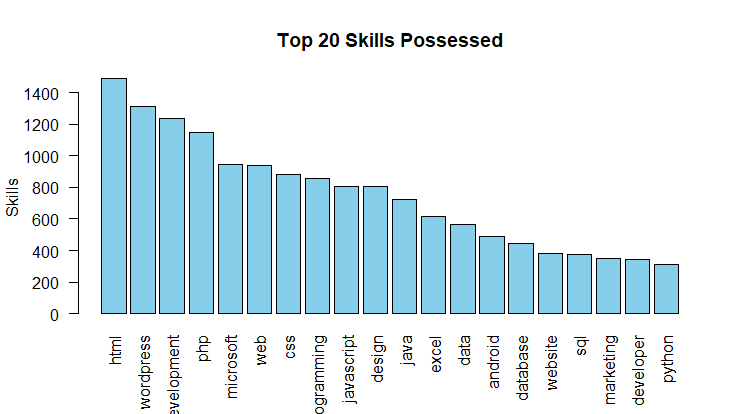 We have looked at the where freelancers are located, what technologies were and are in demand by freelancers as well as what’s in demand by customers. Now what’s your choice and how will you prepare to jump in to the world of freelance?