Contributed by David Comfort. David took NYC Data Science Academy 12 week full time Data Science Bootcamp program between Sept 23 to Dec 18, 2015. The post was based on his first class project(due at 2th week of the program).

Hans Rosling gave a famous TED talk in 2007, “The Best Stats You’ve Ever Seen”. Rosling is a Professor of International Health at the Karolinska Institutet in Stockholm, Sweden and founded the Gapminder Foundation.

The Gapminder Foundation is a Swedish NGO which promotes sustainable global development by increased use and understanding of statistics about social, economic and environmental development.

The purpose of my data visualization project was to visualize data about long-term economic, social and health statistics. Specifically, I wanted to extract data sets from Gapminder using an R package, googlesheets, munge these data sets, and combine them into one dataframe, and then use the GoogleVis R package to visualize these data sets using a Google Motion chart.

The finished product can be viewed at this page and a screen capture demonstrating the features of the interactive data visualization is at: 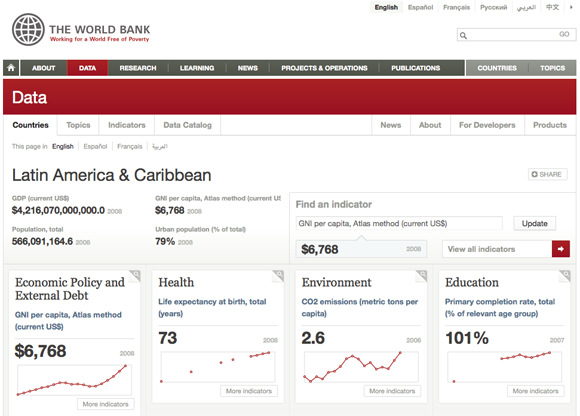 The following Gapminder datasets, several of which were adapted from the World Bank Databank, were accessed for data visualization:

First, install and load googlesheets and dplyr, and access a Gapminder Google Sheet by the URL and get some information about the Google Sheet:

A utility function, extract_key_from_url(), helps you get and store the key from a browser URL:

Once, one has registered a worksheet, then you can consume the data in a specific worksheet (“Data” in our case) within the Google Sheet using the gs_read() function (combining the statements with dplyr pipe and using check.names=FALSE so it deals with the integer column names correctly and doesn’t append an “x” to each column name):

You can also target specific cells via the range = argument. The simplest usage is to specify an Excel-like cell range, such asrange = “D12:F15” or range = “R1C12:R6C15”.

But a problem arises since check.names=FALSE does not work with this statement (problem with package?). So a workaround would be to pipe the data frame through the dplyr rename function:

However, for purposes, we will ingest the entire worksheet and not target by cells.

Let’s look at the data frame. We need to change the name of the first column from “GDP per capita” to “Country”.

We need to change the name of the first column from “GDP per capita” to “Country”.

4) Read in the Countries Data Set

We want to segment the countries in the data sets by region and sub-region. However, the Gapminder data sets do not include these variables. Therefore, one can download the ISO-3166-Countries-with-Regional-Codes data set from github which includes the ISO country code, country name, region, and sub-region.

Use rCurl to read in directly from Github and make sure you read in the “raw” file, rather than Github’s display version.

We can further abstract and “say there are only id variables and a value, where the id variables also identify what measured variable the value represents.”

For example, we could represent a data set, which has two id variables, subject and time: 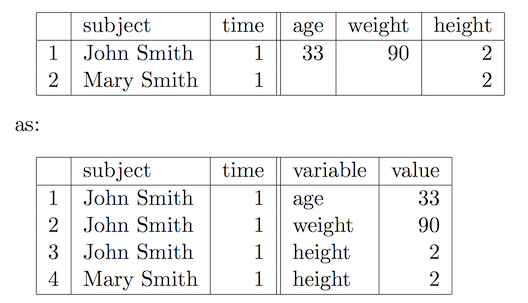 where each row represents one observation of one variable. This operation is called melting (and can be achieved by using the melt function of the Reshape package).

Compared to the former table, the latter table has a new id variable “variable”, and a new column “value”, which represents the value of that observation. See the paper, Reshaping data with the reshape package, by Hadley Wickham, for more clarification.

We now have the data frame in a form in which there are only id variables and a value.

Whew, now we can finally all the datasets using a left_join: 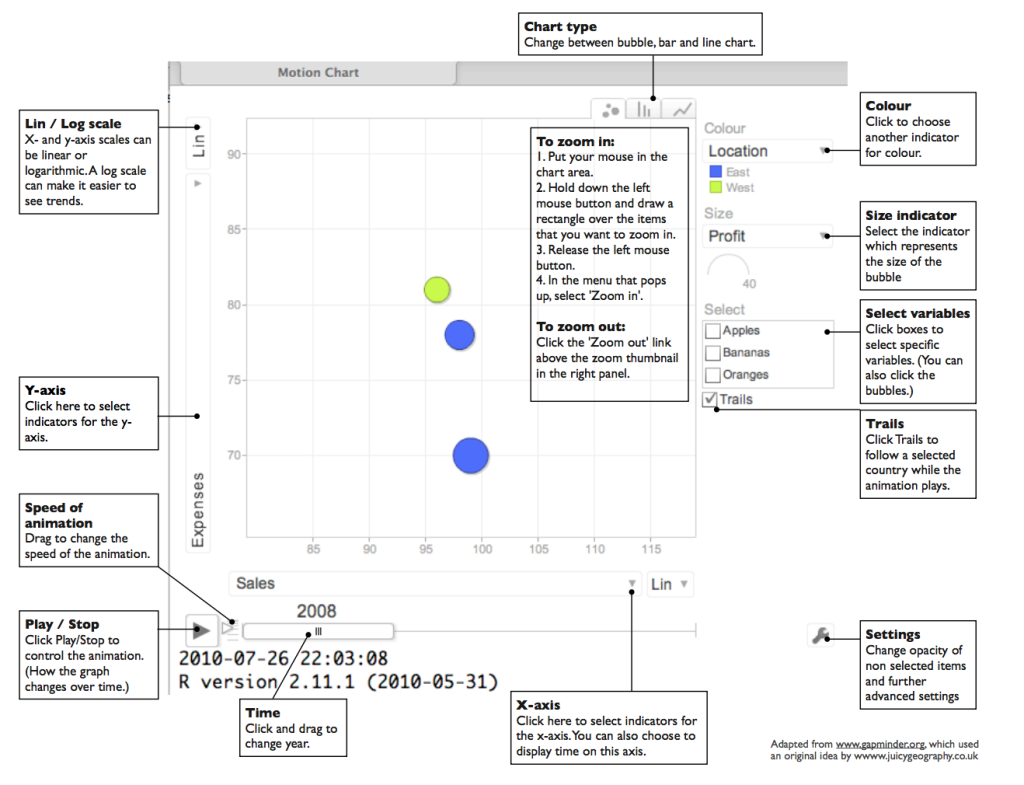 An overview of a GoogleVis Motion Chart

Implementing GoogleVis is fairly easy. The design of the visualization functions is fairly generic.

The name of the visualization function is gvis + ChartType. So for the Motion Chart we have:

The output of a googleVis function (gvisMotionChart in our case) is a list of lists (a nested list) containing information about the chart type, chart id, and the html code in a sub-list split into header, chart, caption and footer. 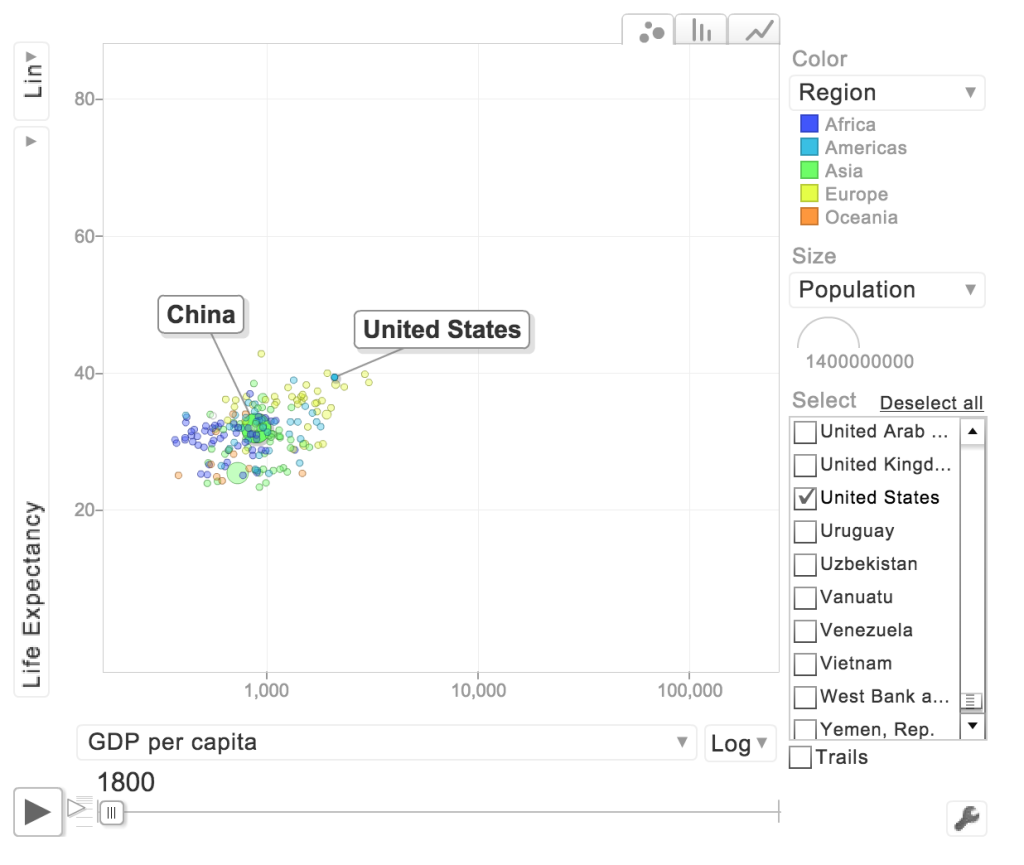 Note: I had an issue with embedding the GoogleVis motion plot in a WordPress blog post, so I will subsequently feature the GoogleVis interactive motion plot on a separate page at http://adatascience.com/Gapminder_Data_Visualization.html

Here is a screen recording of the data visualization produced by GoogleVis of the Gapminder datasets:

11) What are the Key Lessons of the Gapminder Data Visualization Project?