Contributed by by Adam Cone and Zachary Escalante. They are currently in the NYC Data Science Academy 12 week full time Data Science Bootcamp program taking place between January 11th to April 1st, 2016. This post is based on their fourth class project - Machine learning(due on the 8th week of the program).

The training data for this project consisted of a single data frame with 33 columns and 250,000 rows. 30 of the columns were independent variables with numerical values: 29 floating points, 1 integer. One of the columns, EventId, was an integer observation index not to be used for prediction. Another column, Weight, was a floating point artifact from simulation the data originated from. Finally, the single dependent variable, Label, was a two-level factor 'b' and 's', for background and signal. For a more complete description of the data, the physics motivation for the problem, and the accuracy metric used, please visit https://www.kaggle.com/c/higgs-boson. The test data consisted of same variables as the training data, except for Weight and Label, and had 550,000 rows. Our objective was to predict whether each row of the test data corresponded to a 'b' (background) or 's' (signal). 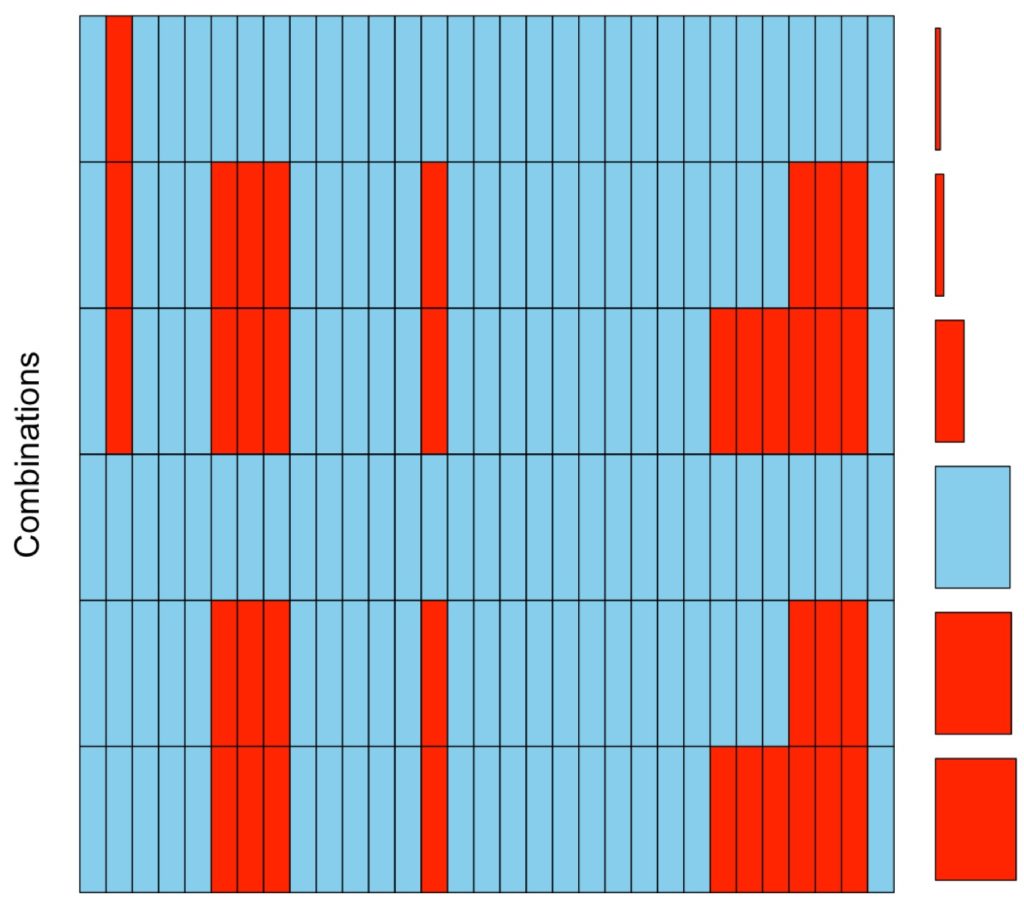 , but rather systematic. To understand why the missingness might follow the pattern we observed, we studied the particle physics background. We found two sources of missingness that explained all the missing data: topology and number of jets. 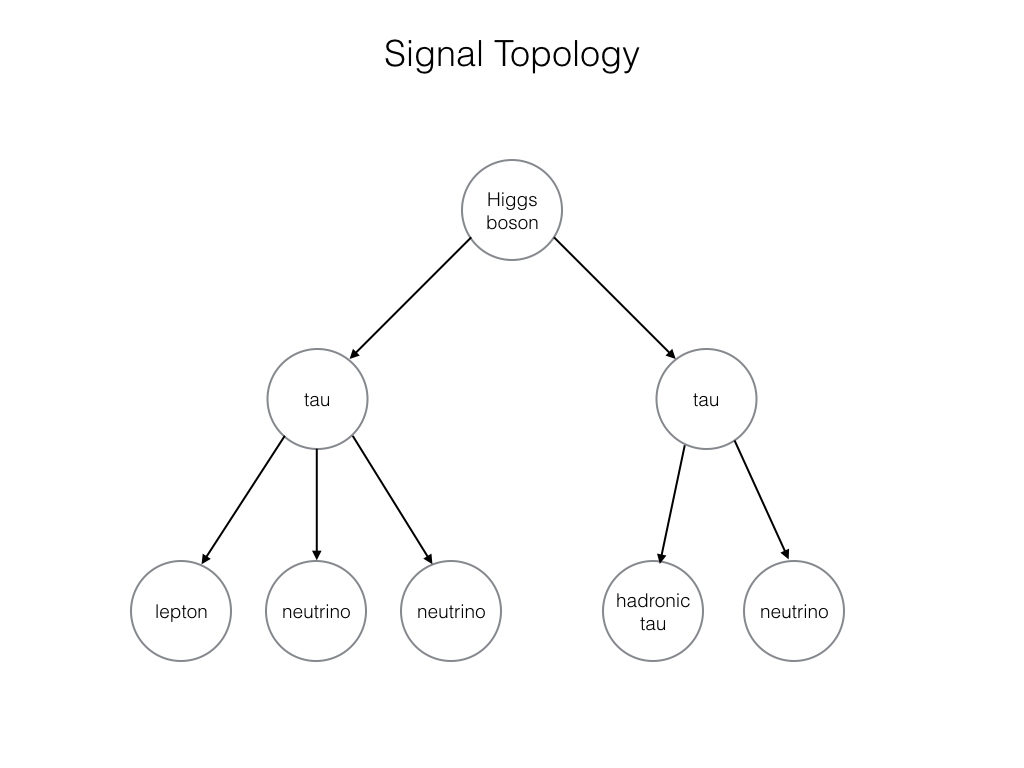 For certain topologies, the phycisists could generate estimates for the mass of the candidate Higgs boson. 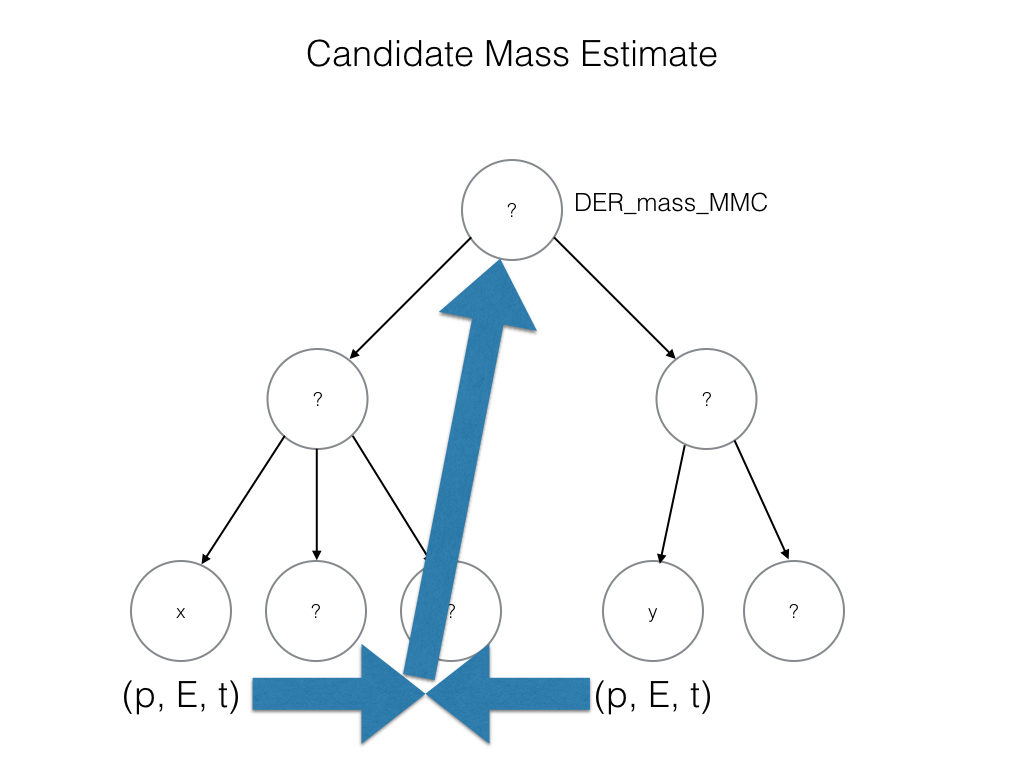 Jets are pseudo-particles that result from top quark decay, one of the three expected background decay topologies. 12 of the 30 columns of independent data were either directed measurements of jet quantities or quantities derived from those measurements. As a result, when, for instance, no jets were observed (not all decay topologies involve jets), the data in the jet-related columns were missing. 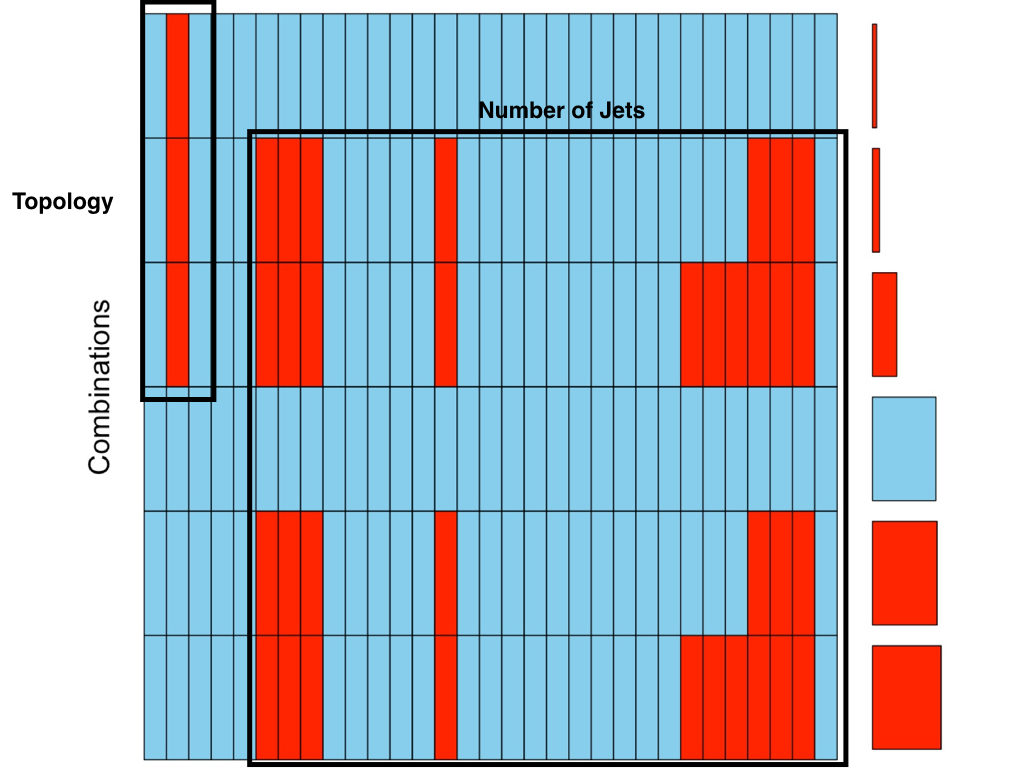 Interestingly, in all six regressions on different data subsets, two variables appeared important: DER_deltar_lep_tau and DER_pt_ratio_lep_tau. DER_deltar_lep_tau is a measure of the angular difference between the emitted lepton and tau particles. DER_pt_ratio_lep_tau is a measure of the relative transverse momenta of the emitted lepton and tau particles. Since these two variables survived the elasticnet regression pruning process in all six cases, it seemed to us like they may have relatively large predictive power. These results were only subjective, however, and would need to be confirmed by SVM modelling of the reduced variables.

Our group decided to experiment with fitting a Support Vector Machine (SVM) to each of the six subsets of our data in order to classify both signal and background noise. SVMs are designed to cut a hyperplane between data points in high dimensional spaces for classification purposes. Considering the number of variables in each our our subsets, we believed this was an especially appropriate algorithm for this data set.

There were three attributes of our model which we had to consider: feature selection (addressed using our Elastic Net Regression), kernel selection and the parameters for our kernel (cost and lambda). For our feature selection, we decided to tune an SVM to each of our subsets with only the variables that we found to be significant for the respective data frame (as per the Elastic Net regression). We concurrently tuned another model with the full data frame including all variables for each subset, with the goal of deciphering whether the reduced data sets had comparable predictive power to the full data sets.

Code for tuning our SVM model on our first data frame:

Function to choose the right model to predict each instance of the test set:

We tuned our models using 21% of our data and 2-fold cross validation (that computation time to tune our model using 5 or 10-fold cross validation would have prohibited us from finishing the tuning process in time to submit our predictions. We see in the chart below, that using Elastic Net regression we were able to eliminate upwards of 80% of our data and maintain a high degree of accuracy in our training set 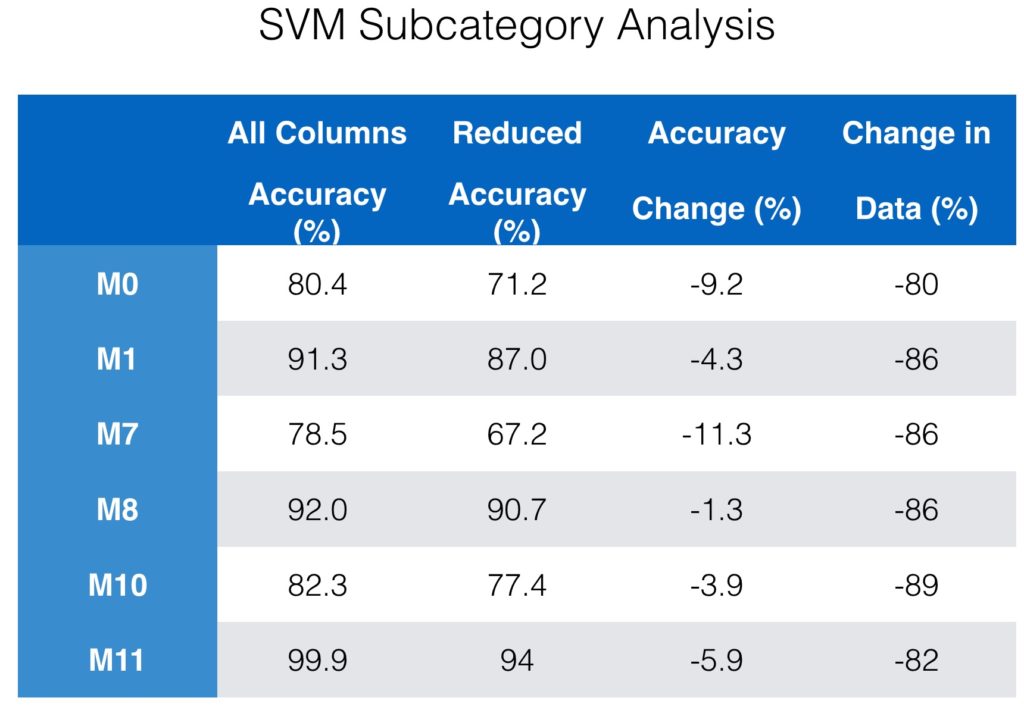 Variables that were eliminated by Elastic Net Regession were still useful in tuning our SVM model. Even though the coefficients of many of our variables had been pushed to zero, they still provided meaningful the basis for Support Vectors to create additional hyperplanes with which our model was able to significantly improve the classification process (as evidenced by the improvement of our Kaggle score from 1.218 to 3.02). We had expected that the full model would perform moderately better than the fitted model, but we were surprised by exactly how inferior the fitted model performed. It was evident that our SVM models performed best with no variable elimination, no matter the significance of those variables in Elastic Net regression.

The SVM was very expensive computationally (one model could take upwards of 3 hours to tune given 5-fold cross validation), but seemed to do well as a predictor of classification (especially compared to other teams that used Random Forests).

Zach Escalante's path to the field of Data Analysis has not been a conventional one. Born and raised in South Florida, Zach did his first bachelor's degree in Finance at Florida Atlantic University (FAU). Following the completion of...
View all posts by Zachary Escalante >