Do you like earning money? And, at the same time contribute to saving the planet? What if I prove to you Solar Business is the next booming field having plenty of opportunities in coming decades, with plus point of reducing our carbon footprint.

You'd argue...Really? But solar installations are so expensive! They are not even efficient! Why would anyone even install them?

Ah! Let me correct you, solar installations 'were' expensive and 'were' inefficient. It's like almost everyone right now is working on driving down the cost of solar power and increasing it's efficiency. This is what got me interested and I started doing some analysis in this field. Please read on to know more.

Since this was my first R project, excitedly I started looking for some datasets with solar installations and found an interesting dataset on Kaggle for Google Project Sunroof - an impressive concept where data from Google Earth is used to get the pictures of your house roof to analyze how much energy from sunlight you can harvest and further calculate the monetary benefits you can yield from solar installation. The dataset had most of the information I needed for my analysis. I also, downloaded data for Coal and Natural Gas consumption for electricity from U.S. Energy Information Administration, to see how much Coal and Natural Gas is actually being used by various states. Another missing piece in the puzzle was financial angle; for this I used Photo Voltaic Cell cost data from National Renewable Energy Laboratory.

I processed the datasets in R language using Dplyr, TidyR and StringR packages. I used Ggplot, Leaflet, Plotly and Googlevis libraries to plot the graphs. Finally, I created an application of all the graphs using R Shiny package.

According to U.S. Energy Information Administration, in 2016, about 65% of electricity generation was from fossil fuels (coal, natural gas, petroleum, and other gases), about 20% was from nuclear energy, and about 15% was from renewable energy sources, out of which only 0.9 % was from Solar Energy. 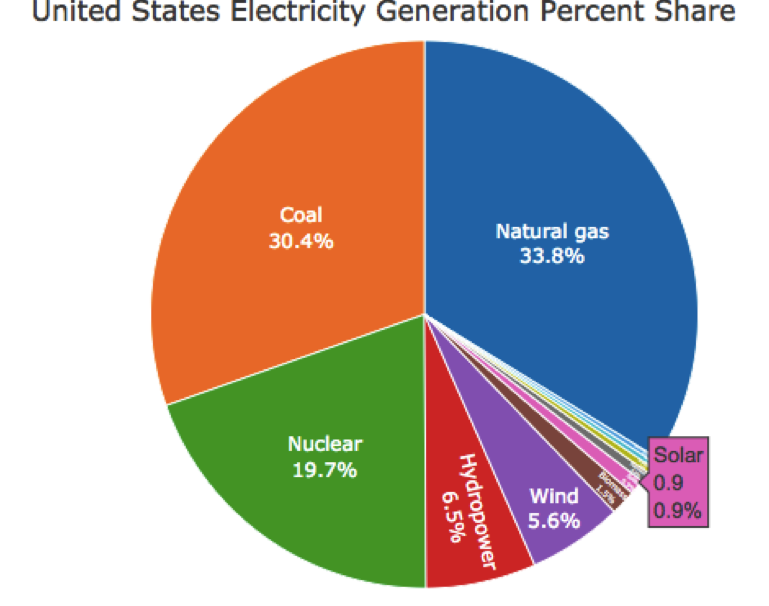 From the above graph we can see, largest sources of electricity are Coal and Natural Gas. I wanted to further analyze, how different states in US consume these 2 sources to generate electricity. I created an animated graph in Googlevis to show animation for all the years from 2001 through 2017. Below is the snapshot of the animation graph for the year 2001. Observe, Texas consumes largest coal and natural gas. This makes the animation look very steady for other states. The values for Texas are so high, that I may  have to normalize the values  to make other states visible on the map. May be I'll try logarithmic values. 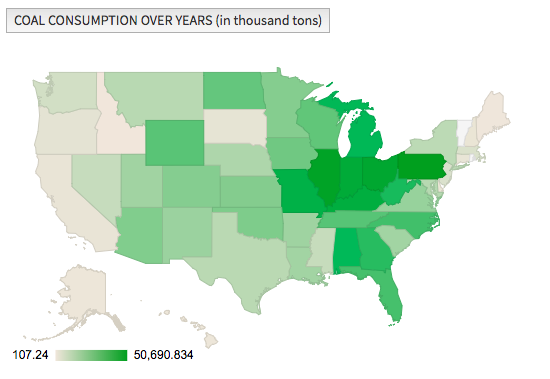 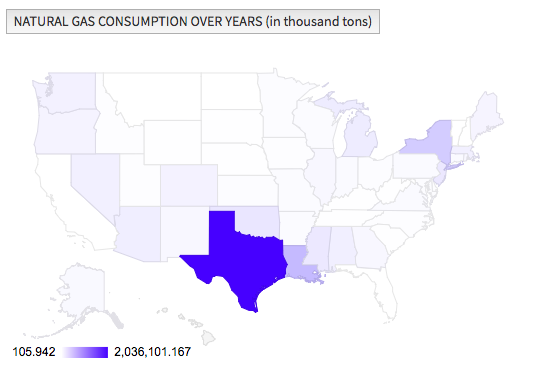 3. Total Sunlight Received by US:

US is a large land mass and I always wondered, how much sunlight do we really get. I was curious to find out which states get most sunlight and how can we harness it. I plotted below graph using leaflet by adding shape file for counties. Notice the ranking on the right table clearly shows that states in the southern part of the country get most sunlight. Let's quickly compare data for Texas: It uses 95 M tonnes of coal annually on average. It receives about 117, 568, 363, 600, 000 KWH solar energy annually on average. If we actually harness this solar energy, we could save large amount of green house gas emissions caused by burning tonnes of coal. Also see this. 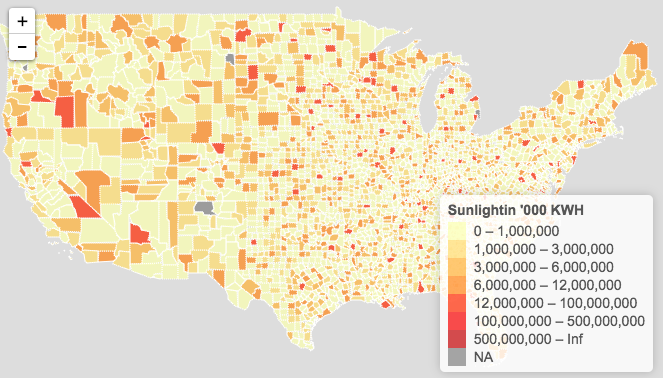 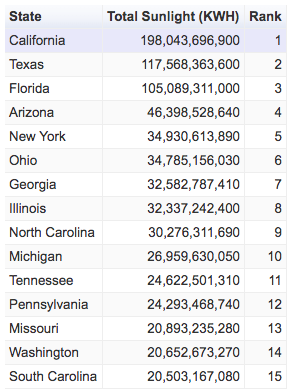 I plotted below graph using Dygraph package. It shows how cost of Photo Voltaic Cells / watt has reduced in last 7 years.

US department of energy has an initiative - the SunShot Initiative, focussed entirely on driving down the cost of electricity generated by solar panels. And the average cost of solar energy generation has dropped 82% in the past decade. US Government is supporting the solar installation by giving federal investment tax credits (up to 30%), rebates and even forming laws such as 'Go Solar California'.  All these facts mean, more and more people would want to benefit from installing solar panels. Since not too many homes have solar panels installed yet, solar panel installation is going to be huge in coming time. According to an article in Forbes, there could be almost trillions dollars up for grabs. Exciting isn't it? 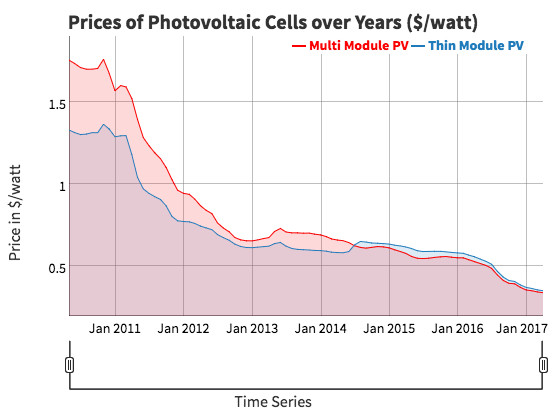 Further, let's not forget the environmental perspective. Did you know, if we do not dramatically reduce the greenhouse gas emissions, the global sea level is likely to increase 'several meters over a timescale of 50 to 150 years', which could drown 50% of NYC under water. Oh No!

However, Solar Energy, unlike any other non renewable energy sources does not produce harmful pollutants in the air. And yes, it is high time we understand it's benefits and reduce our carbon footprint.

Below graph, plotted using leaflet shows us top 50 cities that can contribute to the carbon offset (radius of red circles showing the amount of carbon offset). Notice how most of the cities are in the southern part...hmm.

So, with all this said, aren't we excited to plunge into harnessing the benefits? I know you'd say - Yes! But where do we start? I have plotted below graph in ggplot, to research the top 15 states with highest opportunities. I have scaled the 'Existing Installs' by 10 times to make it visible on the graph. This graph clearly shows there is plenty of opportunity to try our luck doing some business in this field.

There’s so much more to research here. I really want to work to find how the solar power generation efficiency is improving, and so is the average capacity factor of utility-scale. I would also like to research on how much investment firms are keen in this field. After that, I want to use some R packages such InsolaR and SolaR to get some numerical data for some numerical conclusions.

Given above insights, I believe Solar Business is in for a vast transformation.The road ahead won’t be without its challenges, but we must keep the long-term in mind. For the long run we can positively say Solar Energy is way to go. With further detailed analysis on more data we can definitely solidify some numerical conclusions for both financial and environmental gains.