Can you imagine that a house can be described with 79 explanatory variables covering (almost) every aspect of a residential home? If that's the situation, then how accurate can the house sale price prediction be, with the state-of-art machine learning technologies? What would be the new challenges arising to advance from the state-of-art to some even further improvement? ... These are some of the exciting questions and opportunities that we have and need to find/give answers to in this project. Specifically, our focus is primarily on

The project is originated from a house price prediction competition on Kaggle, where the used data set is on the house sale prices of residential houses in Ames, Iowa. For the training set, it gives information of totally 1460 houses, with each house described into 79 variables. There are totally 23 nominal variables, 23 ordinal variables (and thus altogether 46 categorical variables), and 33 numerical variables. The test set contains 1459 house records.

To load such a highly dimensional data set into the work space and prepare it to be ready for analysis is not a trivial task. One particular difficulty we came across is that: many categorical variables just have "NA" as one of their valid levels/values, which really means a certain categorical feature e.g. fireplace, is not available in the house, but have nothing to do with the missingness of data, which is usually what "NA" means in a data set. To handle those false-positive/"faked" NA values properly, we need first import the full data set "as-is" with the default NA finding filter disabled, and then, identify and rename all the false-positive NAs into some name that is not/less misleading, e.g. "None". After that, the true/real NA values are left, for which we can do proper imputations next.

After that, we checked the missingness of the data set, and conducted proper imputations for the missing values of each corresponding variable, respectively. We followed the recommended right approach of imputing the missing data in training set and test set, completely separately.

We did thorough data analysis on each of the variable and their respective correlations with the house prices to be predicted. First, the house sale price is log transformed (actually by log(1+x)) to make its distribution better fit with the normal distribution.

For numerical variables, the graph below shows the scatter plots of top 6 numerical features of highest correlation with the house price. We can see that for the first five of them, there are very clear and strong linear relationships. 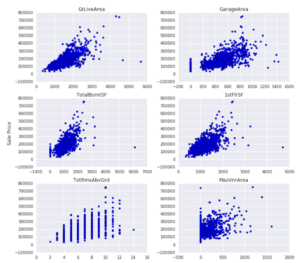 We also checked the cross-correlations among all the numerical variables. The high correlation coefficients (either ≥ 0.5 or ≤ -0.4) are marked out as follows. This gives us some useful insight to apply PCA (principal component analysis) on those highly correlated pairs/groups of numeric variables, to eliminate multi-colinearity among them, and hopefully may lead to better model prediction performance in the end. This would be one of promising future directions to work on. 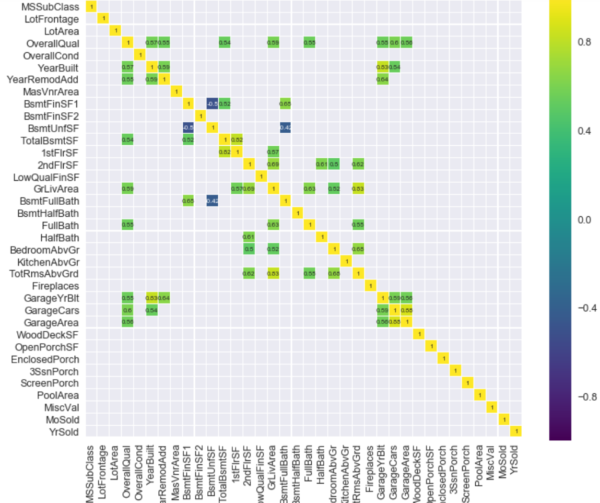 For ordinal categorical feature variables, their correlation coefficients with the house price are ordered and shown below. Herein, we can see that some are of very strong correlations with the house sale price, e.g. Overall Quality, Exterior Quality, Basement Quality, etc. while some others may be of very weak/low correlations such as Lot Shape, Fence quality, and Overall Condition, etc. We will show later that for our feature engineering, we picked the top 7 highest correlated ordinal features and converted them into numerical variables and dropped some of the lowest correlated variables, both of which can help improve the model prediction performance. 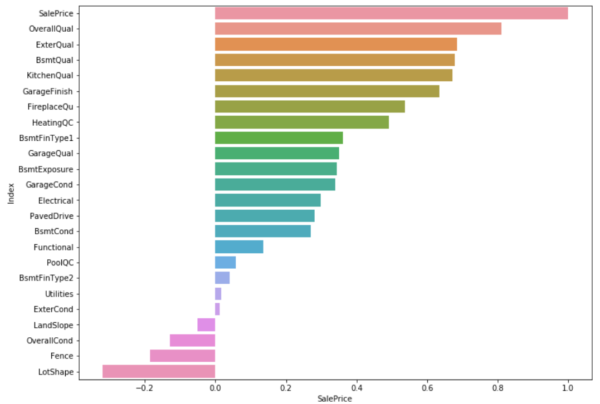 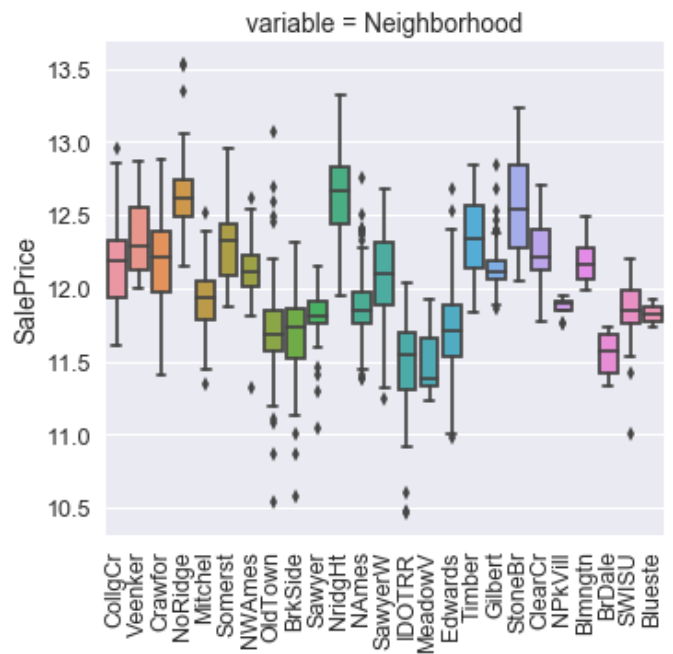 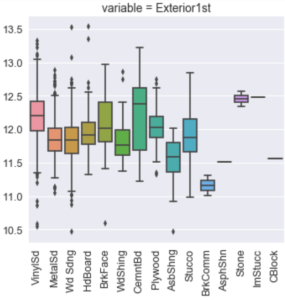 Based on the data analysis results/findings, along with some good intuition or common knowledge on real estates, we conducted our first set of feature engineering steps as follows:

The major ideas/logic behind them are:

To seek more feature engineering possibilities, one effective approach we found and used is to conduct feature importance analysis and feature selection with the help of the Caret package in R, and applied the result for feature selection in our actual modeling process with Sklearn in Python.

Specifically, we first ran RF model fit on the training data in R, and collected feature importance info of all the variables. Then, using the recursive feature elimination (RFE) function from Caret, we sorted all the feature variables from the most to least important, and conducted backward selection of features via dropping 5 variables at a time, and compare their cross-validation (CV) prediction performance. As such, we can find the optimal feature set that gives the lowest RMSE (root mean squared error) prediction error. The result figure is shown below, which shows the dropping of 10 least important variables will give the best RMSE performance. 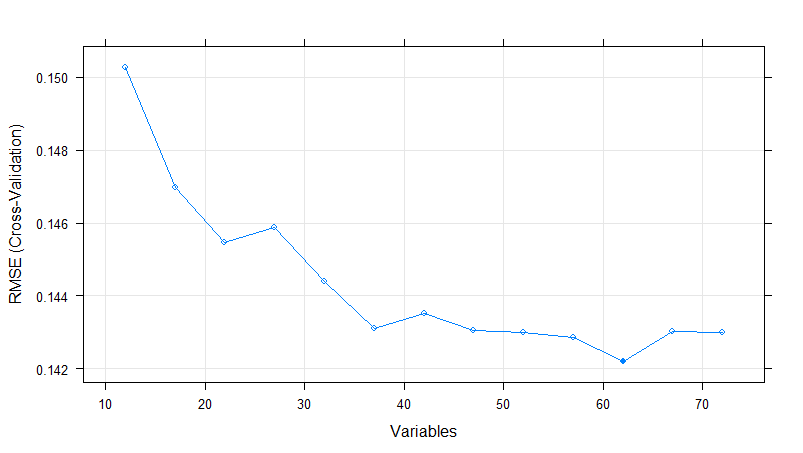 In practice, we found that the insertion of two differently distributed noise variables as mentioned above is quite helpful/important in that: with different RF model tuning parameters, e.g. the number of randomly selected feature variables at each step of tree split (denoted as "mtry" in Caret), the actual ranking of the two and their relative positions to each other may be changed quite dynamically. E.g. for one mtry value, Gaussian noise variable importance level may be much higher than the uniform noise variable, which is actually of the least importance level among all, and thus on the very bottom,  but for another mtry value, the uniform noise variable may be instead of higher importance level than that of the Gaussian noise variable, and both are away from the bottom level. Therefore, we found that using two differently distributed noise variables serves well as a robust approach to pick out un-important feature variables. In this way, we identified another set of 9 variables in addition to the 10 selected variables from backward feature selection earlier.

Unfortunately, we didn't realized this point in the very beginning, and training different models with different set of feature variables adds extra implementation work, which we cannot make it in the limited time frame of the project. So, in our model tuning and selection process, we still convert all the remaining categorical variables into dummy variables as inputs, which inevitably increases the total number of variables from 79 to 218. We mark down this direction as one of the future works for further improvement in the end.

We used 80% to 20% split of the original training set for the actual local training set and test set, respectively. For linear models, we tried and tested with the regular OLS model, and the regularized linear models of Ridge, Lasso, and ElasticNet. For non-linear models, we tried RF and GBM. For model tuning, Sklearn's grid search with CV function is used to find the optimal hyper-parameter values. Moreover, for the tuning of GBM model which involves a lot more number of hyper-parameters than the other used models, instead of purely relying on exhaustive grid search without any human supervention/interaction, we found and followed a reasonable approach efficiently combining grid search with proper hand tuning.

For single model selection, we found that the best performed single model is ElasticNet, whose best tuned hyper-parameters are alpha= 0.1833, l1_ratio=0.015, meaning more toward l2 norm of Ridge. Result shows that it only uses 32% of the total feature variables.

For model stacking, we used the typical averaged model stacking paradigm from Kaggle, and finally tested and chose to stack the best tuned ElasticNet, RF and GBM models altogether. Although the prediction accuracy of the stacked model is a little lower than the best single ElasticNet model on the local test data set, when actually uploaded to Kaggle for a much larger test set (1459 rows) testing, the final Kaggle score of stacked model is better than that of the single best tuned model of either ElasticNet or GBM. Therefore, in our experiment, the stacked model performs the best.

We tested the feature selection idea of dropping the two candidate sets of selected low importance variables, one at a time. Result shows that such dropping always improves the prediction accuracy for all the linear models of OLS, Ridge, Lasso, and ElasticNet. For GBM, the performance degrades a little, but after re-tuning the hyper-parameters, its performance also becomes a little improved than before. Except for RF, even after model re-tuning, the performance is still a little worse than that before the feature dropping. In spite of that, as we tested, the overall stacked model performance is also always improved by the selected feature dropping. Therefore, this result confirms the effectiveness of our feature selection approach.

The final achieved model performance of all the tested models for the local test set are listed as follows. 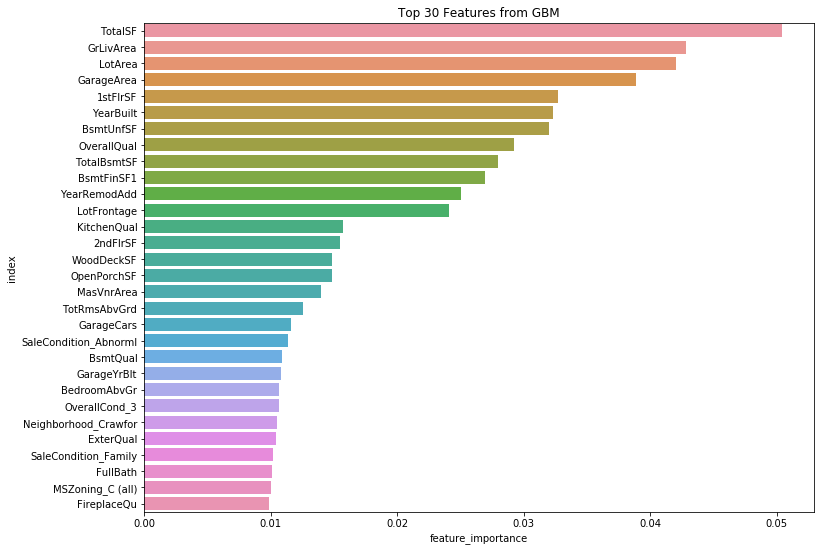 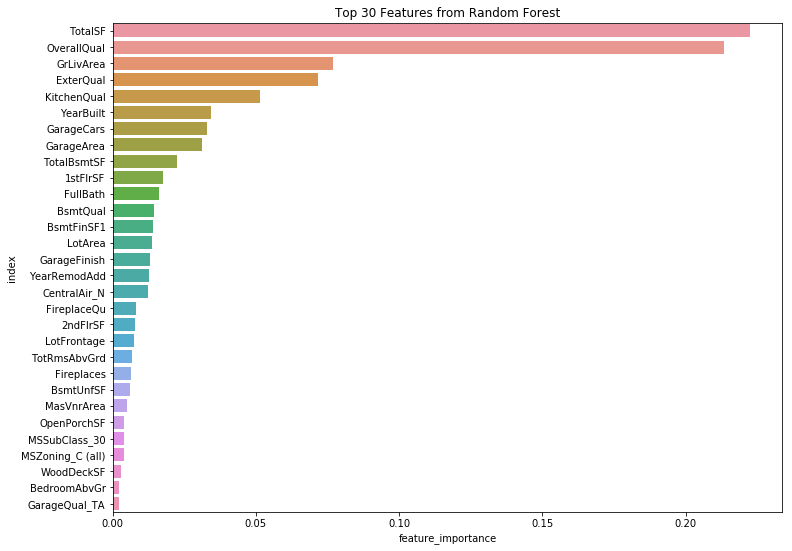 Finally, some graphs on the final stacked model performance on the local test set are shown as follows. We can see that the model performs reasonably well without much serious violation issues on constant variance, normality, and independent error, etc. Note that starting and ending portion of the qqplot are not so well fit for the normal distribution. We think that this is more or less due to our having not carefully checking and removing some of the outliers from the data. This is also marked down as a work for future improvement. 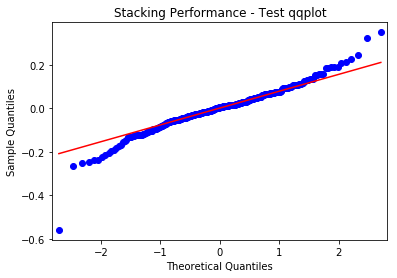 This project is really a great learning experience, which lets us going thorough the whole entire process of building a machine learning model to solve a practical regression problem in real world, starting from the very beginning of data analysis, cleaning, preparation, etc. till the model stacking, evaluation,  and delivery in the very end. We touched upon, thought over, and finally either solved or gained useful knowledge/understandings of many sorts of major or minor practical issues, which is really a very rewarding process overall. In the end, we all agreed and realized that: feature engineering is more often than not one of the most critical part or differentiator on the final model performance.

Due to limited time, we realized but have no time to try many of the interesting/promising directions/ideas, which are summarized as follows for a good reference in the future.

(All the code, data, and presentation, etc. can be found on GitHub.)

Hua attended 12-week data science bootcamp of NYCDSA, which is really a great and awesome experience. Thanks a lot!
View all posts by Hua Yang >

Daniel (Donghyun) got a Ph. D. in Electronic Engineering (Wireless Communication Systems) from Sungkyunkwan University, South Korea. Since 2002, He has served as a wireless communication system design engineer for Samsung Electronics, where he has been recognized for...
View all posts by Daniel (Donghyun) Kang >

Hi, My name is Zhe Yang. I got my master degree in Financial Analyst at Rutgers University. I love challenges and solving difficult problems. I used to be a trader in the T3 trading company. During I worked...
View all posts by Zhe Yang >

Yinan recieved his Bachelor's Degree in Accounting from Shanghai University of Finance & Economics and Master's Degree in Economics from USC. Before data science, he worked both as an Equity Analyst and Data Analyst for major financial institutions...
View all posts by Yinan Jiang >