I am a bookworm.
I read 3-4 books a month (non-fiction books only) and start 80% of my sentences with "I read somewhere that..."

My interest in books is what motivated me to scrape goodreads.com, the world's largest site for readers and book recommendations, which Amazon acquired in 2013.

The goal of this project was to analyze the common traits of Top 400 books on goodreads.com, and predict the success of a book based on its reviews.

I scraped the books from the ‘Best Book Ever’ list. To capture all the information needed for my analysis, I had to scrape three different page templates.

Below is an example of a page template that lists a few elements required for my analysis (highlighted in orange). 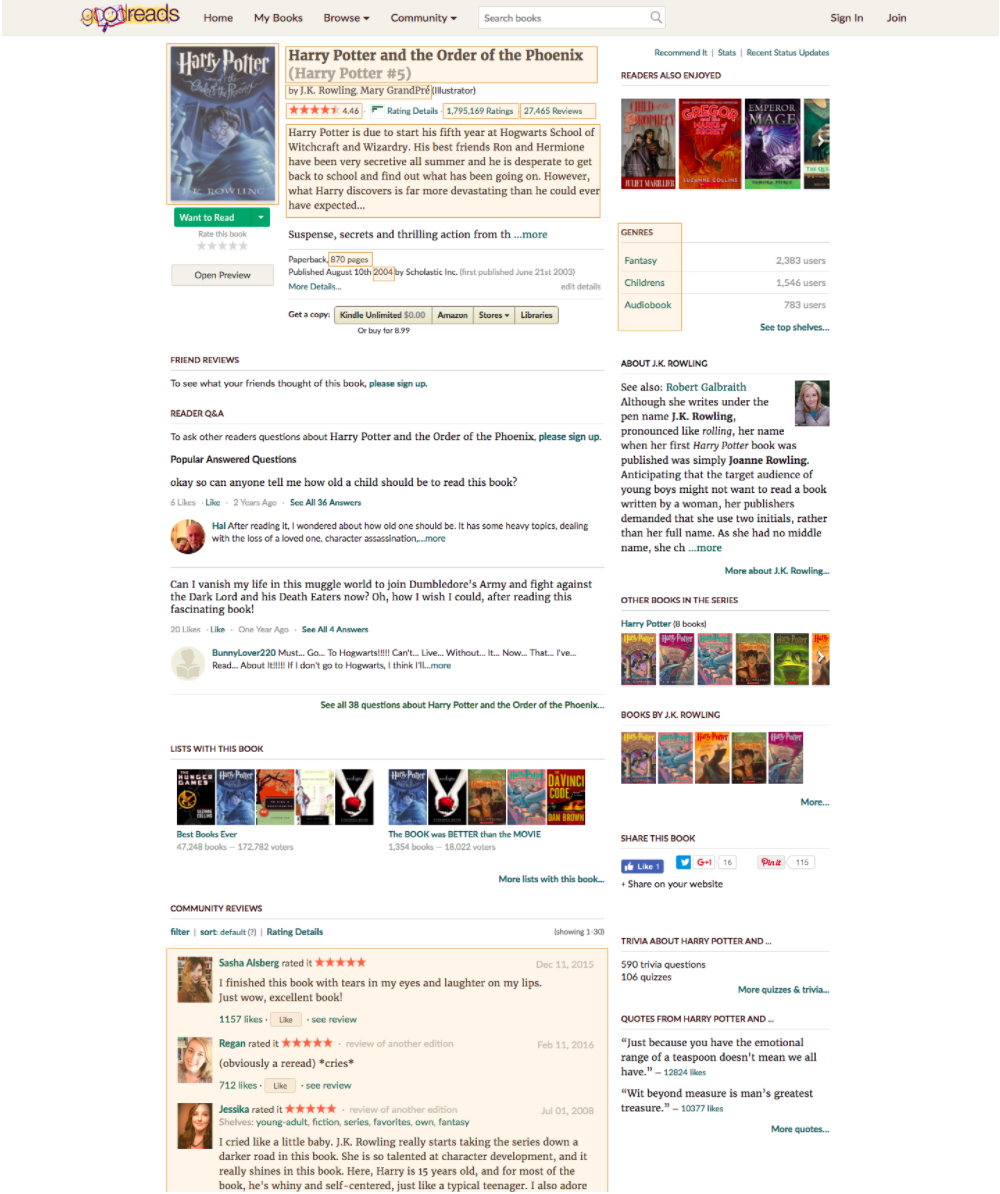 I divided my analysis into three parts, each guided by a set of questions:

The first two parts are intended to guide an author BEFORE he/she writes a book, while the last one is designed to predict the success of a book AFTER it was published.

I used Python for my analysis and Python’s Bokeh package for visualization.

Which genre is most represented in the Top 400 list?

Fiction, Classics and Fantasy are the most represented genres in the Top 400 list. Note that there may be an overlap between the genres as a book could be classified under multiple genres.

The histogram above raises a few questions:

The heatmap below addresses the first question: it shows the distribution of the Top 16 genres by ranking category (e.g. Top 100, Top 200, etc.). The color depicts the number of books.

An interesting insight: the genre Literature is not part of the three top genres. Yet, it is highly represented in the Top 100 list.

As raised above, the Top 400 list is meaningless if we can't put it into context by comparing it to the worst 400 list. Unfortunately, there is no such list...

In the absence of a 'Worst Ever Books' list, I scraped a random sample of 10,000 books on goodreads.com, which became my ‘Control’ list.

Disclaimer: I learnt later that the Worst Ever Books list does exist on goodreads.com. 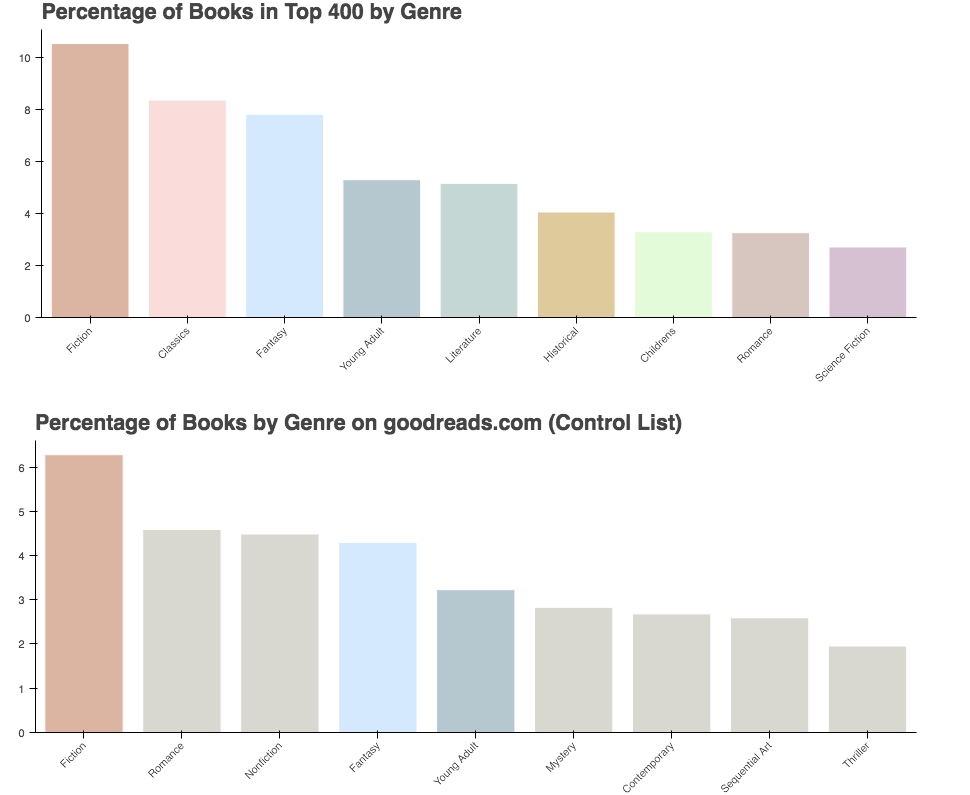 An interesting insight: while the Classics genre is underrepresented on goodreads.com, it is highly represented in the Top 400 list, suggesting that readers are more likely to upvote the Classics.

On the other hand, the Fiction, Fantasy and Young Adult genres represent a significant proportion of the books on goodreads.com. Their likelihood of being in the Top 400 is  higher than an underrepresented genre like Classics.

Is there an optimal number of pages?

The short answer is no. As illustrated below, there is a similar trend between the Control and Top 400 lists. The number of pages is not a predictor of success. 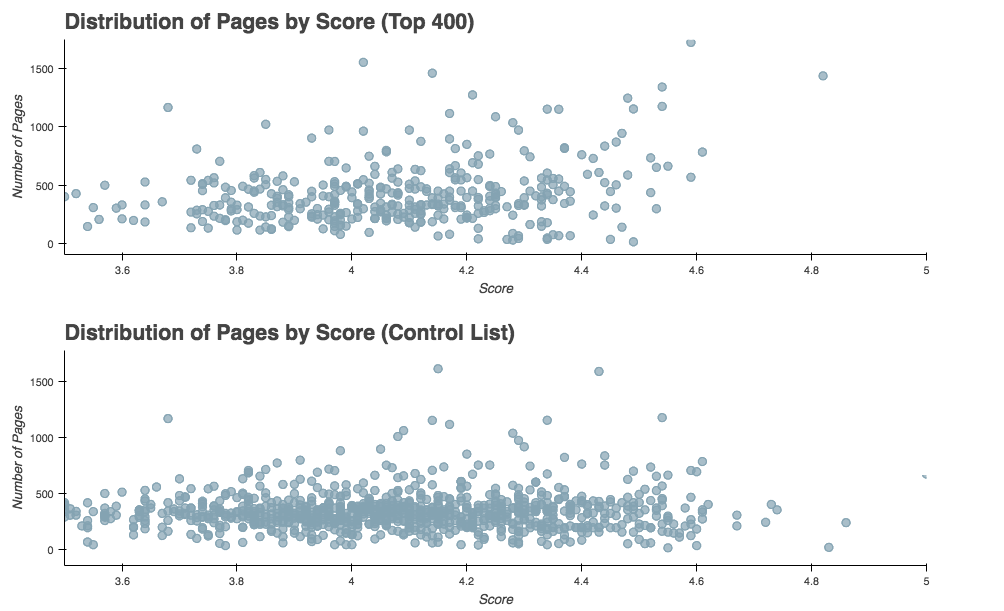 Does the year of publication matter?

For this part, I looked at the distribution of books in the Top 400 per year, and investigated a possible correlation with:

Total Count vs. Average Number of Pages (by Year of Publication)

Is there a correlation between the distribution of books in the Top 400 per year and the number of books sold that year? It does not seem to be the case as illustrated below.

However, the dataset is biased (as explained below), so the results are to be taken with a pinch of salt.

Is the number of reviews a predictor of success?

Should we conclude that the more reviews the better? Or is the relationship between the number of reviews and the score an inverted bell curve where the best and worst books get more reviews? After all, an average book does not spark strong emotions (whether positive or negative); only the best and worst ones do.

The Control list does not confirm the assumption of an inverted bell curve. On the contrary, the five-star books get fewer reviews than the four-star book, while the one or two-star books receive barely any reviews.

Which words, at which frequency, can predict success?

I started my sentiment analysis on the Reviews column using the AFINN dictionary.

Testing the AFINN method on the Control list first

A high level of granularity was needed to be able to identify which words could predict a book's ranking in the Top 400 list. Before applying the AFINN method to the Top 400 list, I checked its reliability on a broader list, i.e. the Control list.

Unfortunately, as illustrated below, the AFINN Lexicon was not granular enough to predict ranking among the ‘Best Ever Book’ list (where, by definition, all the books are successful).

The scatterplot below offers the same insights as the box plot except that I used a continuous variable (the score) instead of a discrete one (the ranking category), and differentiated the ranking categories by color.

My sentiment analysis needed some fine-tuning:

There was no correlation between a word's frequency and the average goodreads score as illustrated in the graph below. 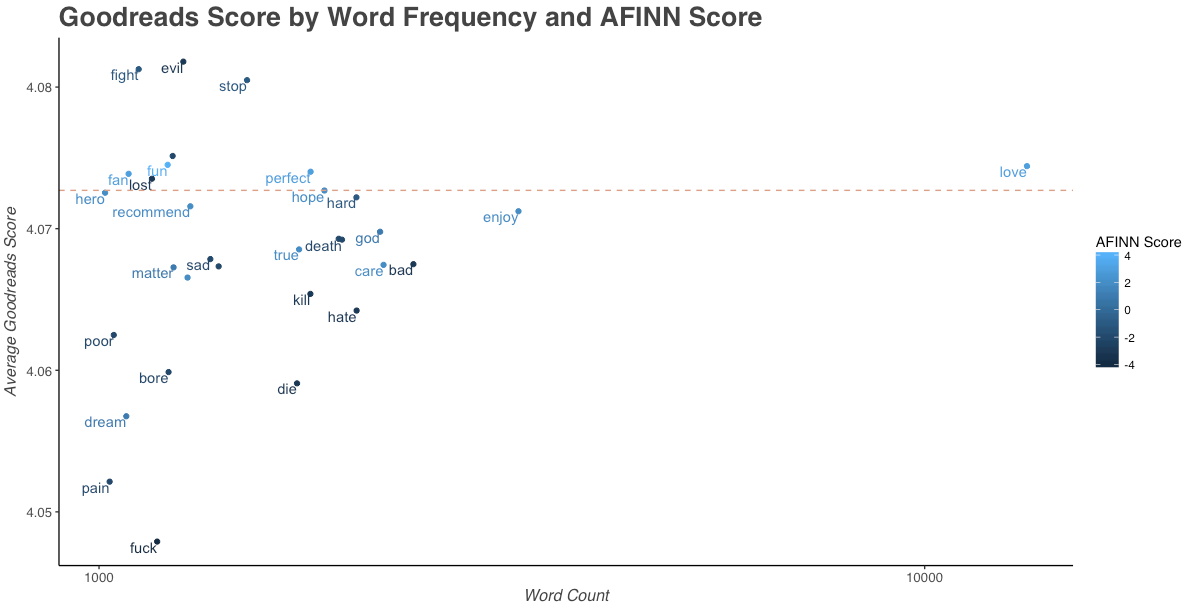 It is interesting to see that some words with a low AFINN score appear quite frequently in the reviews of successful books. This is because the AFINN lexicon is constructed with unigram features, where the syntax and even the order of words is ignored, meaning that “like” in the sentence “I don’t like” will be interpreted positively.

I was not very successful with the AFINN lexicon and decided to look at the Vader lexicon. Its algorithm seemed to be more granular as it output 4 classes of sentiments:

I used a pairplot to analyze the correlation between:

The graphs with a pearson's r score of 0.5 or higher, signaling a correlation, are in green. Pearson's r can range from -1 to 1 with: 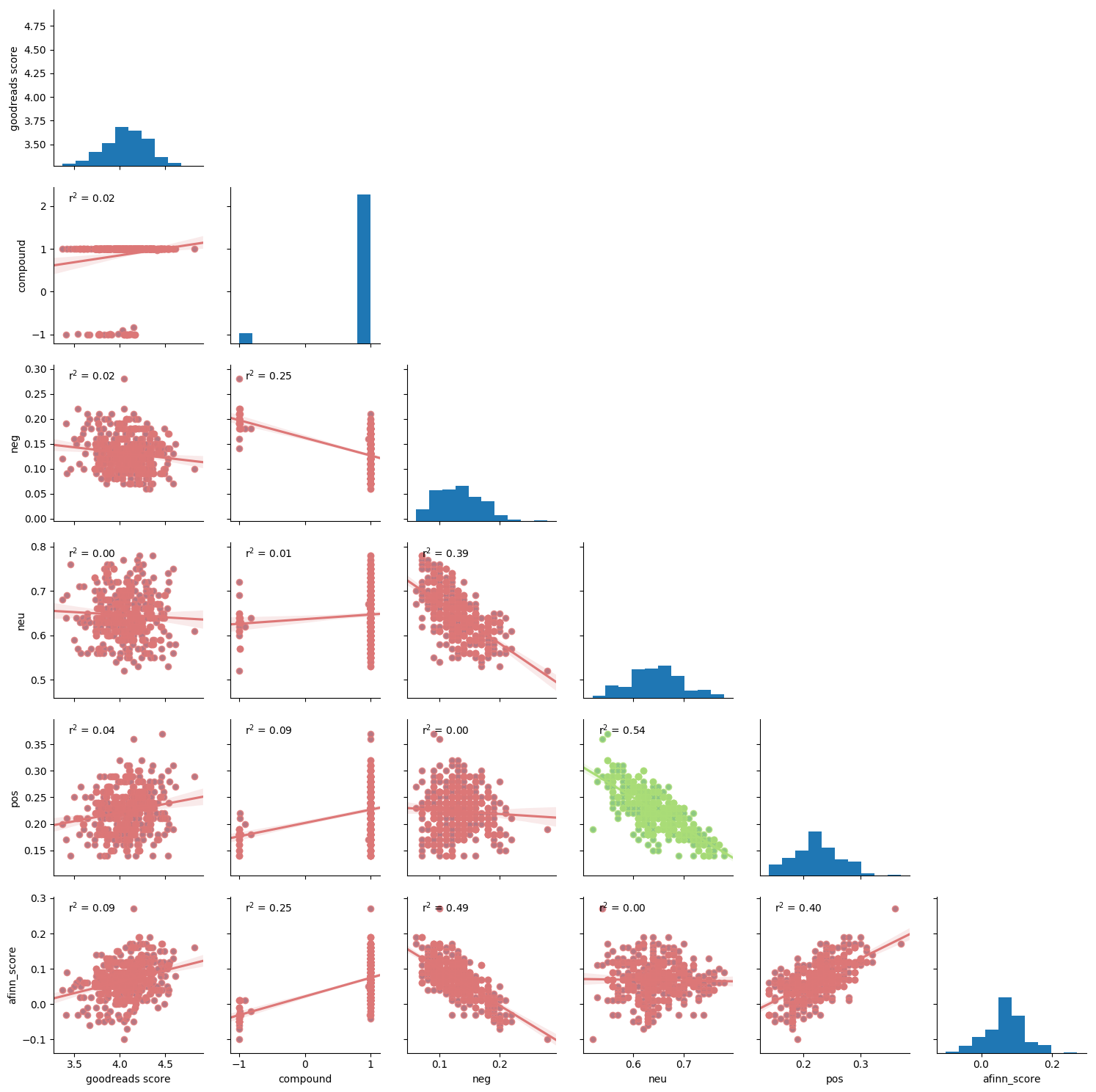 Lastly, there is no correlation between the variables I was interested in (i.e the Vader positive, negative, compound scores vs. the goodreads score).

My analysis suggested that a book in the Classics genre is more likely to make it to the Top 400 list.

There is no clear pattern indicating a preferred year of publication or number of pages, although most of the Top 400 books average 300 pages.

The number of reviews is a good predictor of success: the more, the better. However, it does not help differentiate the four-star from the five-star books. That being said, the five-star books probably sell better than four-star ones, which was not part of my analysis.

Finally, the sentiment analysis part was unsuccessful at predicting the success of a book within the Top 400 list. The AFINN and Vader methods helped predict the likelihood of a high score on goodreads.com. However once a book makes it to the Top 400 list and a high level of granularity is required to differentiate it from other successful books and predict its rank, the two methods were unreliable.

Below is a quick list of the analyses I could have, would have and should have done if given more time and data: 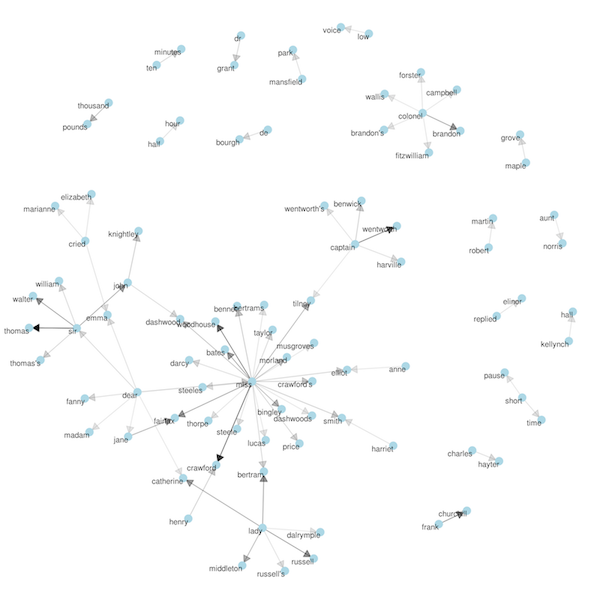