Shiny by RStudio is a web application framework targeted for R programmers. It allows our analysis to be extended as an interactive web application  that can be quickly developed and deployed using RStudio. The post presents how vast amount of data is easily filtered and used as input to the visualizations that were developed.

The data that has been published under the New York open data project contains details of all motor vehicle collisions and related data including location and timing information as well as details of the vehicle involved in the collision and the root cause. The data can be accessed at https://data.cityofnewyork.us/Public-Safety/NYPD-Motor-Vehicle-Collisions/h9gi-nx95

The source data consists of around 948,000 records and by designing a shiny based interface to filter data with the goal of finding trends.

The user interface has been designed such that the left side contains a bar that contains radio buttons and filter controls that lets the user filter the data according to our analysis needs. 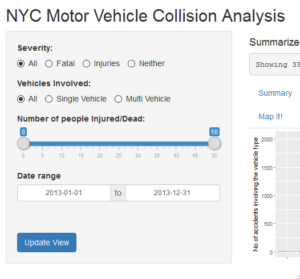 The interface lets us filter the data according to our needs.

The tabbed detail interface lets the user view various types of visualizations that were created based on the filtered data. For e.g., it lets the user see the accidents based on the hour of the day it happened. Selecting another tab lets you see the same data on top if a map. 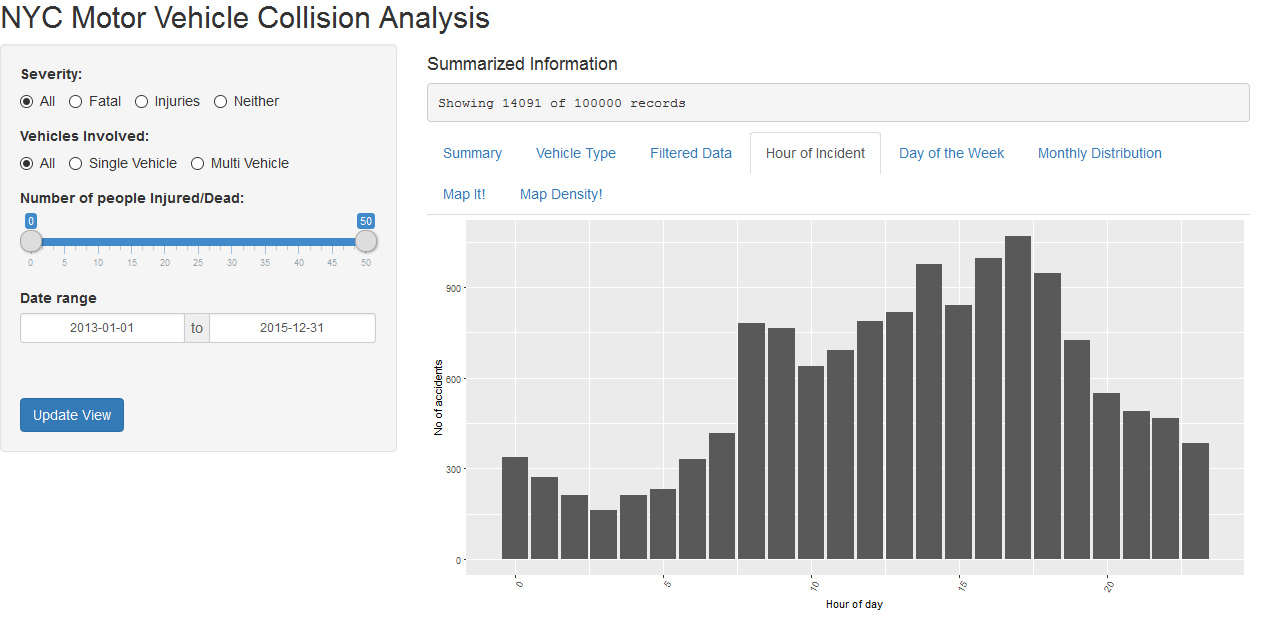 Spread of the accidents based on the day of the week. 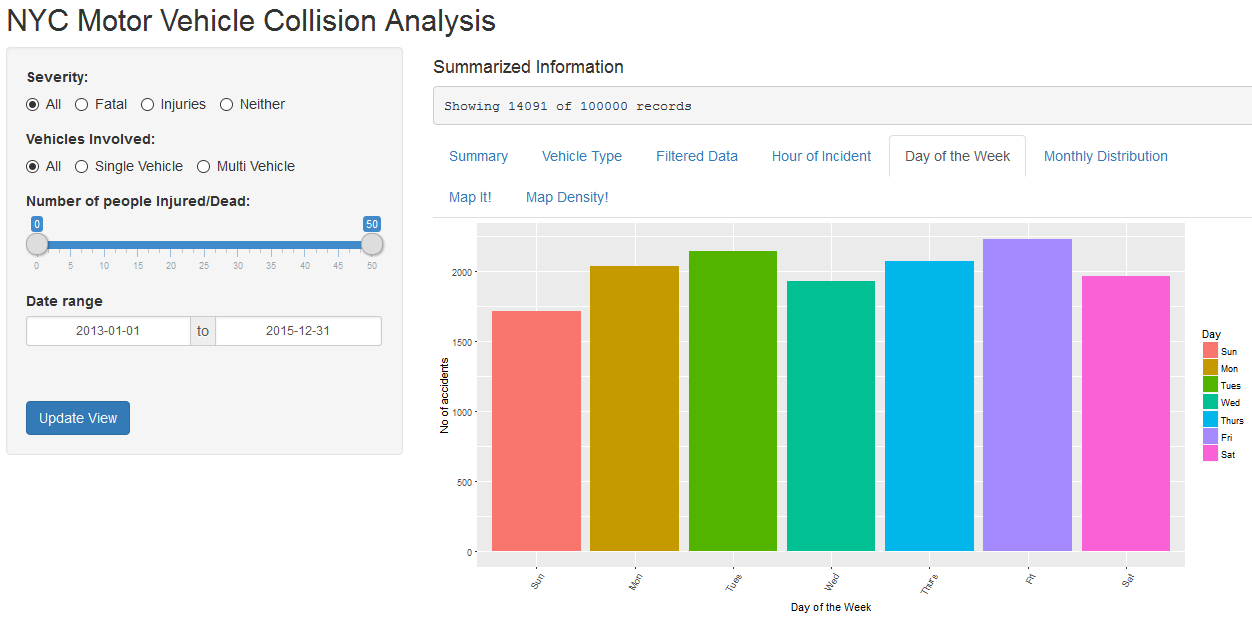 Accident density based on the month of the year. 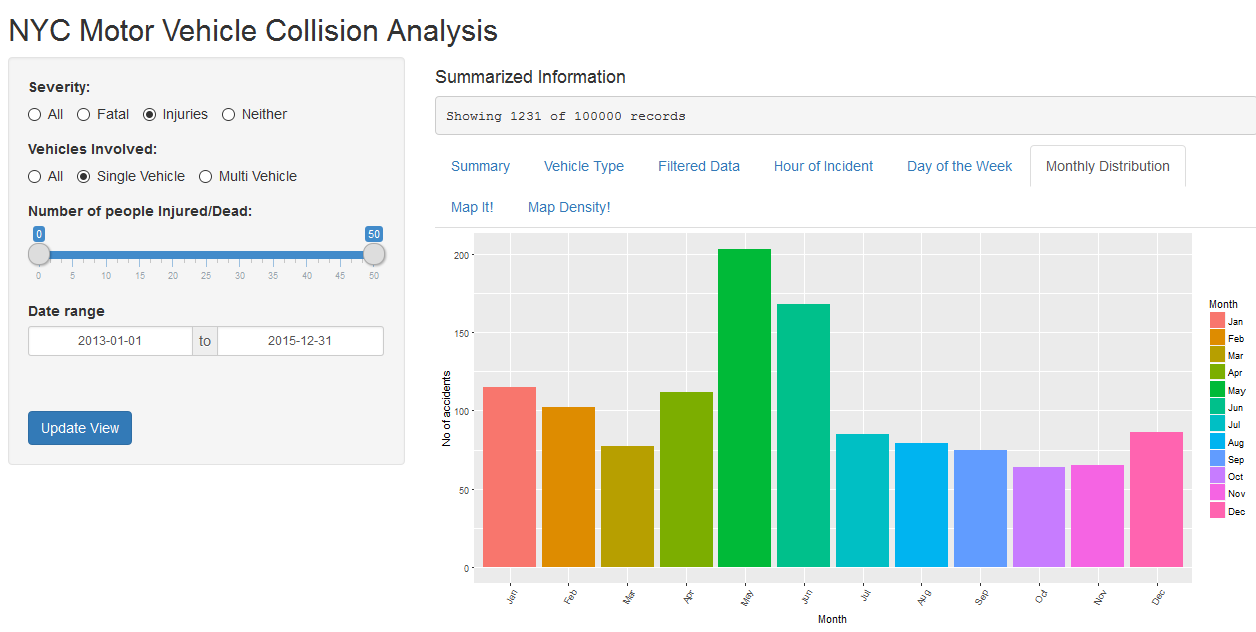 Accidents mapped on top of a map of New York City. 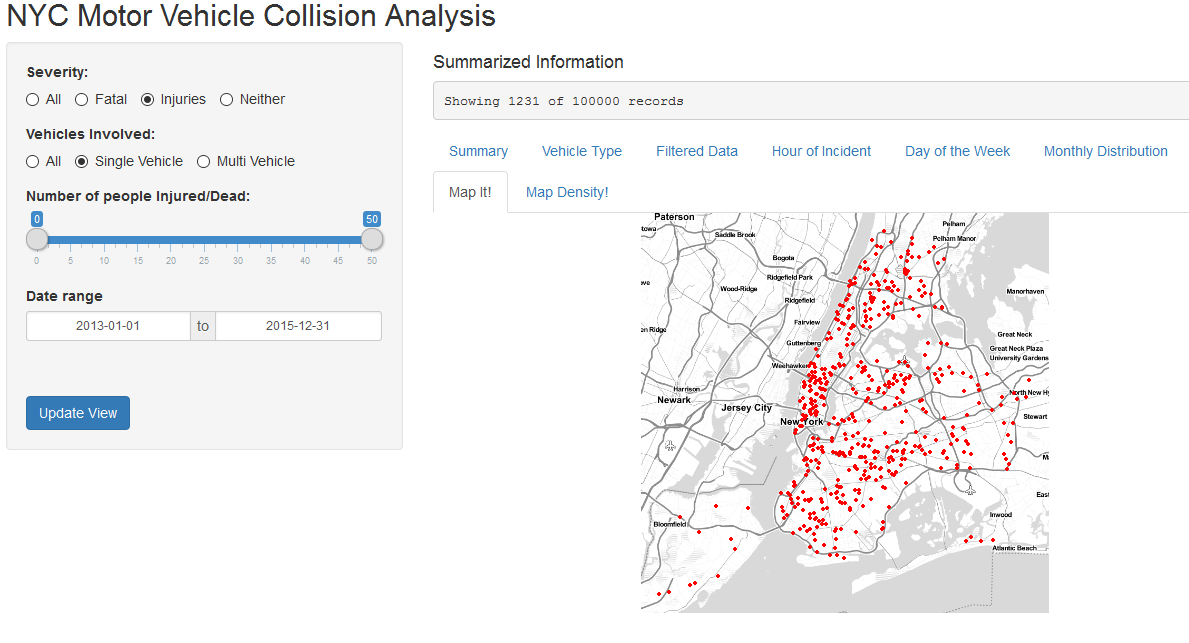 Summarized information based on the density of accidents across NYC 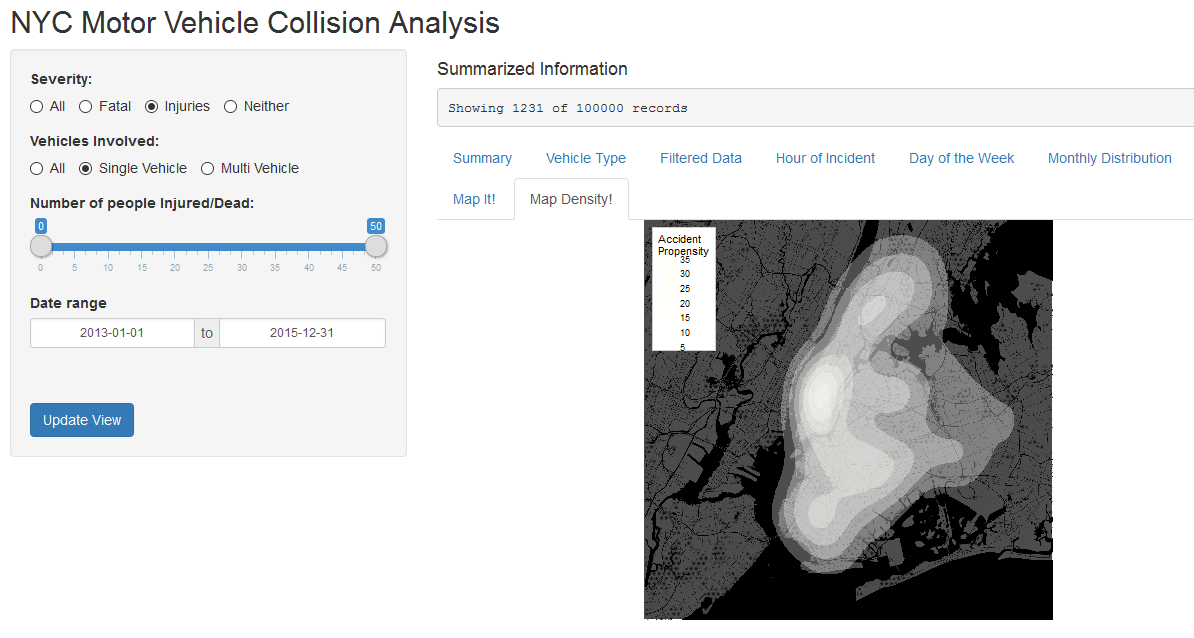 Detailed information related to the data records that are filtered based on the selected controls. 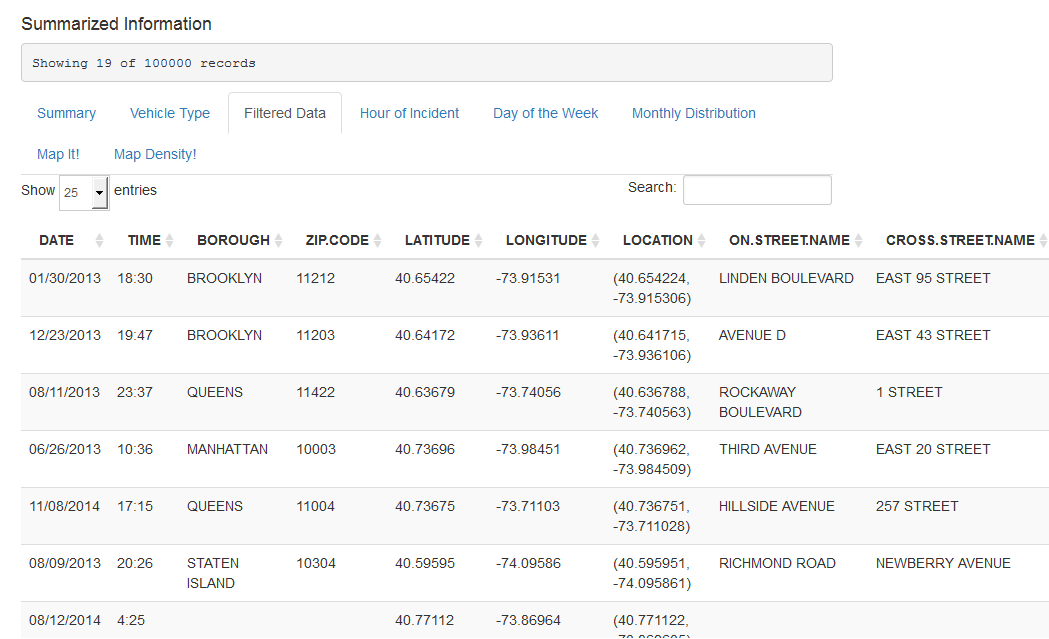 Visualization depicting the type of the vehicles involved in the accidents. 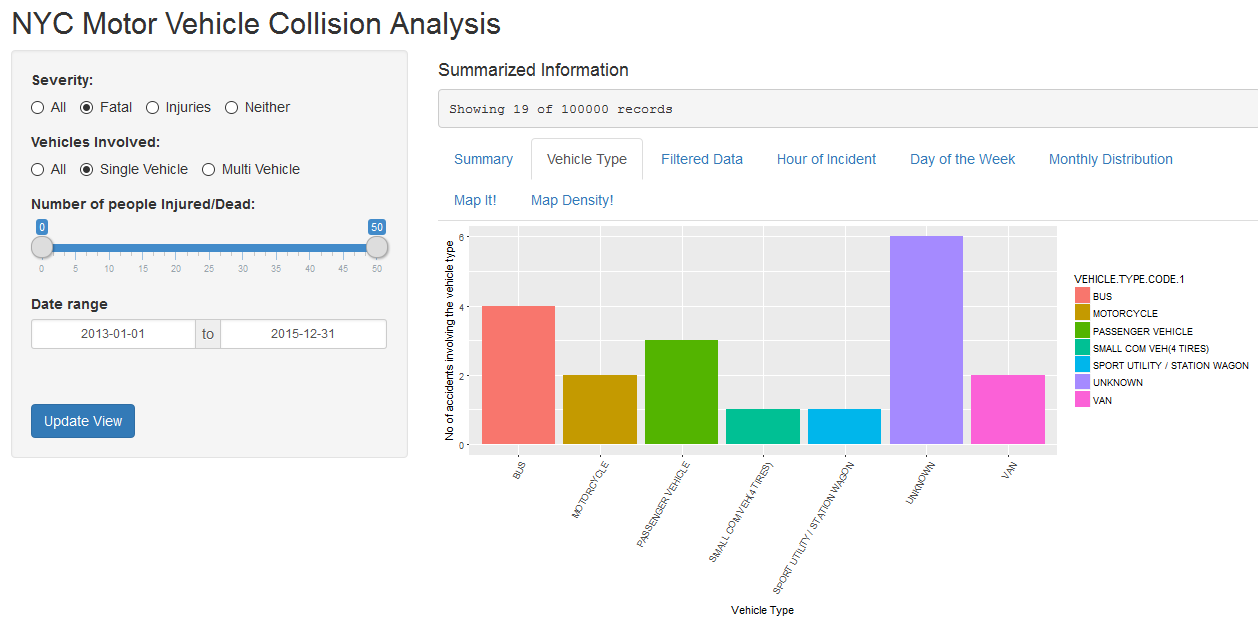 Based on an alternate filter, we see that the shiny app allows the user to see the same graph based on the new filter selection. 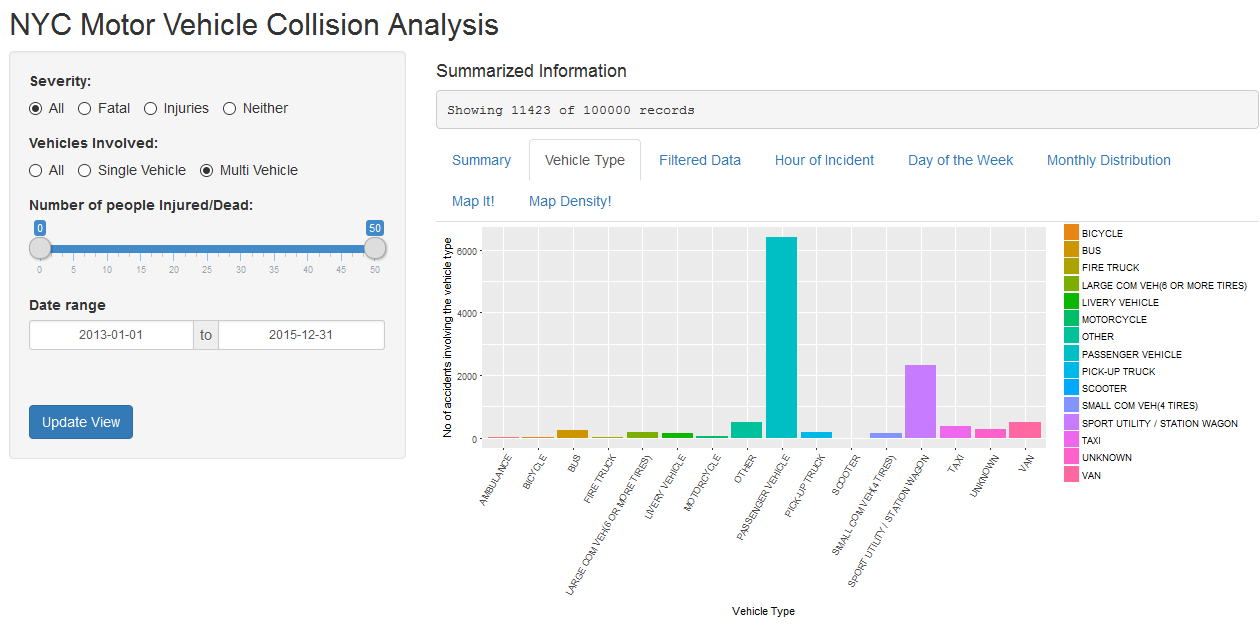 Technology Enthusiast, with attention to detail, having global exposure. She is a self-motivated problem solver with experience analyzing data and deriving meaningful statistical information. Her goal is to be able to make a positive difference in peoples lives...
View all posts by Smitha Mathew >