The web application NYC movie locations guide is a tool designed to aid the visualization, analysis and exploration of movies that have been filmed in New York City for the past several decades. This app was built with R and Shiny and it is designed so that any movie lovers can use it.

Here is the link to the app:  https://yabinfan.shinyapps.io/movie_loc/ 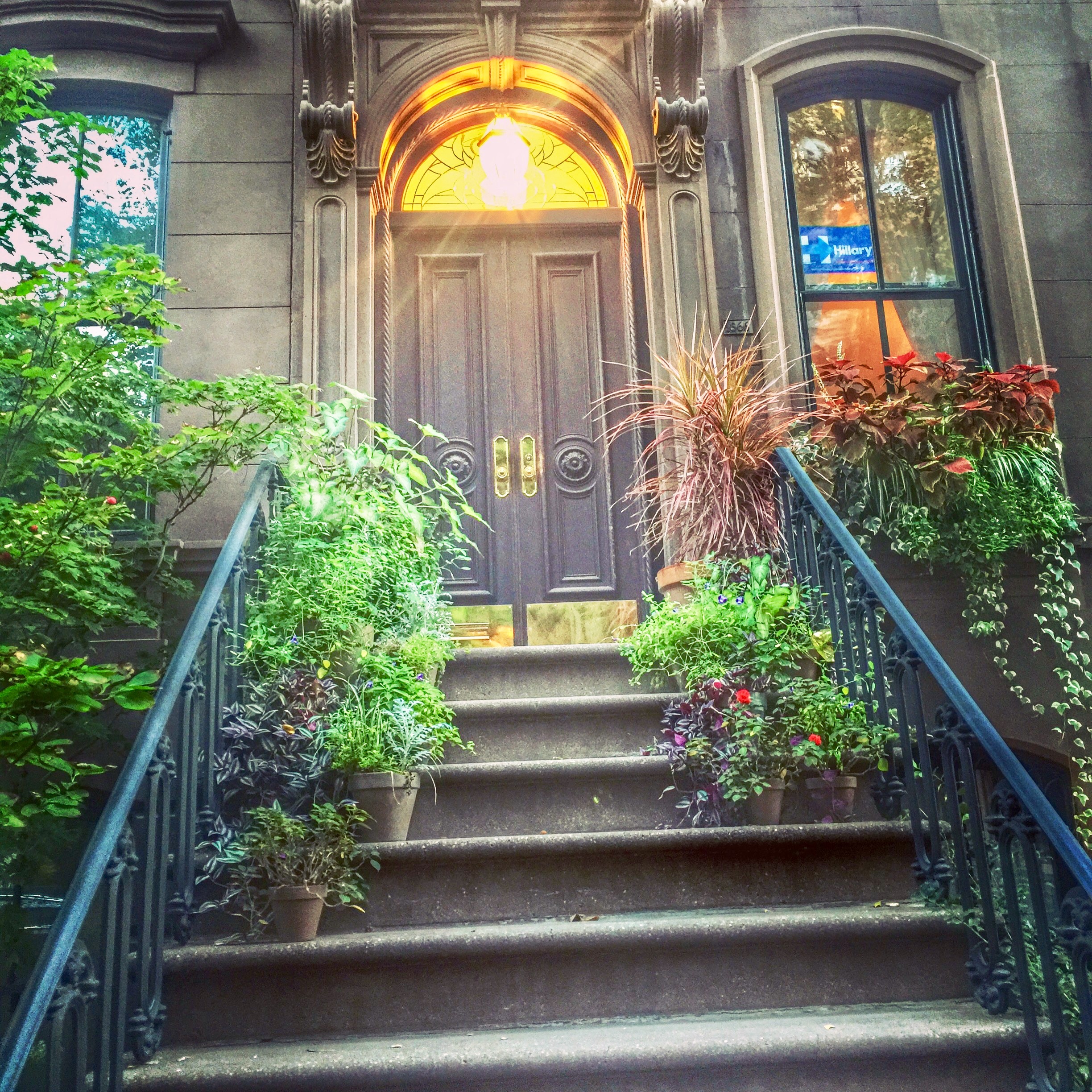 Carrie Bradshaw apartment from Sex and the City.

Have you ever wondered where your favorite TV shows and Films were shot?”

Last year, my best friend came to New York to visit me, We are both massive film fans and I thought it might be a good idea to book a tour taking us round some of the most memorable filming locations in the city. For example, he's not a fan of Sex and The city or Gossip Girl which most of the ones I've come across seem to focus on. He is however, a huge Science fiction movie fan, we both love Spider man and The Dark Knight Rises. However, I'm struggling to find something suitable.

Like most of the New Yorkers, I love New York City and I love movies. Then , why not combine them two together?

If there’s one place outside of Hollywood that is inextricably connected to the movies, it is New York City. “Spiderman,” King Kong ，“ The Dark Knight Rises,” “Breakfast at Tiffany’s,” “Spiderman,” ” “Sex and the City”: from rom-coms to sci-fi thrillers, New York City has been home to many iconic movie sets. According to the Mayor's Office of Film, Theatre and Broadcasting, New York is among the world's most filmed cities—in 2011, for example, 188 films were shot on location in the five boroughs, along with 23 primetime episodic television series.

1 . Movie Locations: Clicking on the first option takes you to map , you’ll see lots of colorful circles and by clicking on them, gives the film title, poster, and other movie information. The color of the map's markers categorized as Comedy, Romance, Action, Thriller etc. You can choose the filter to search on the map by year, IMDB score and Genres 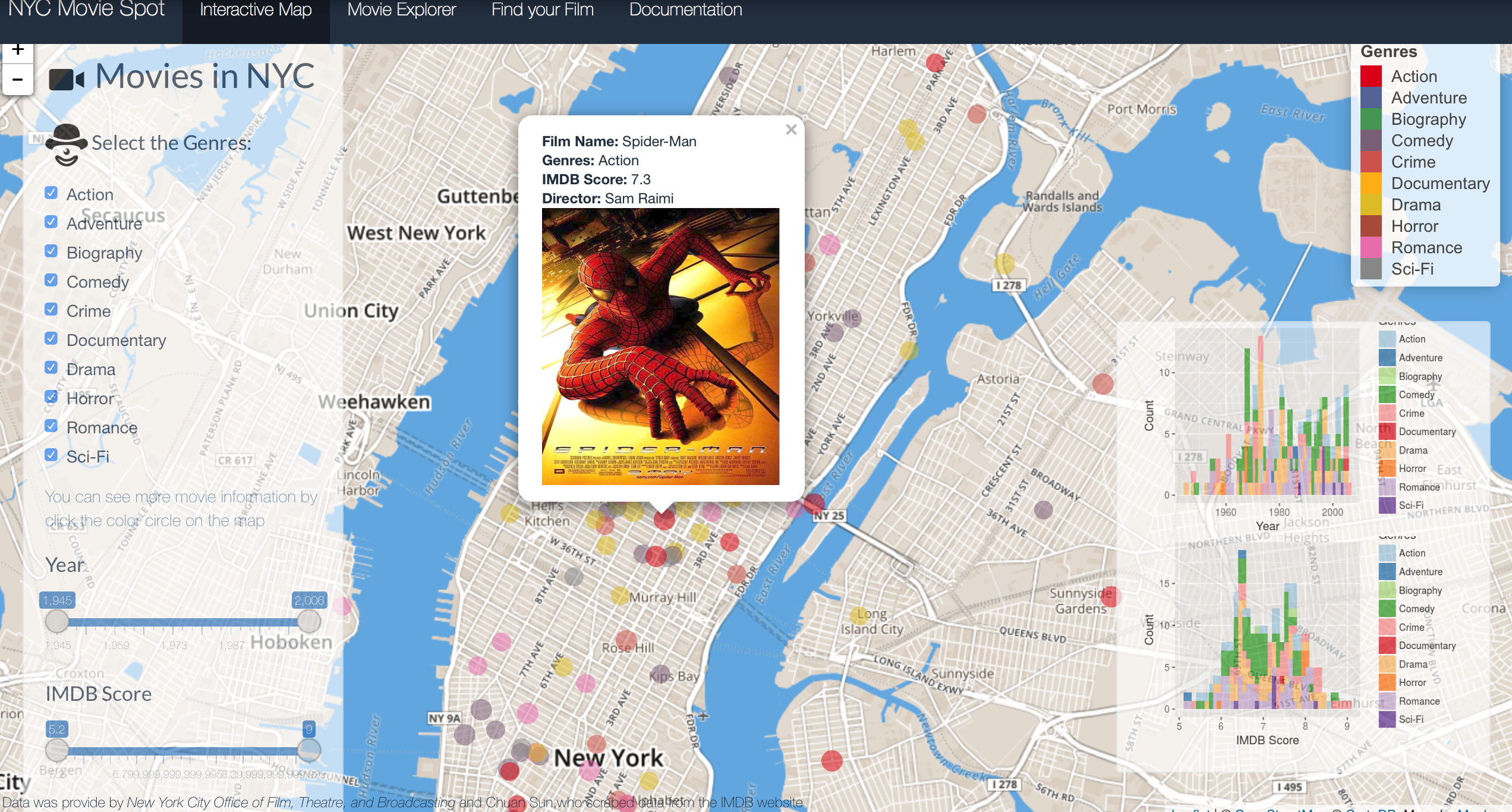 2.  Movie analysis: Graphs to show the changes over the years and IMDB scores 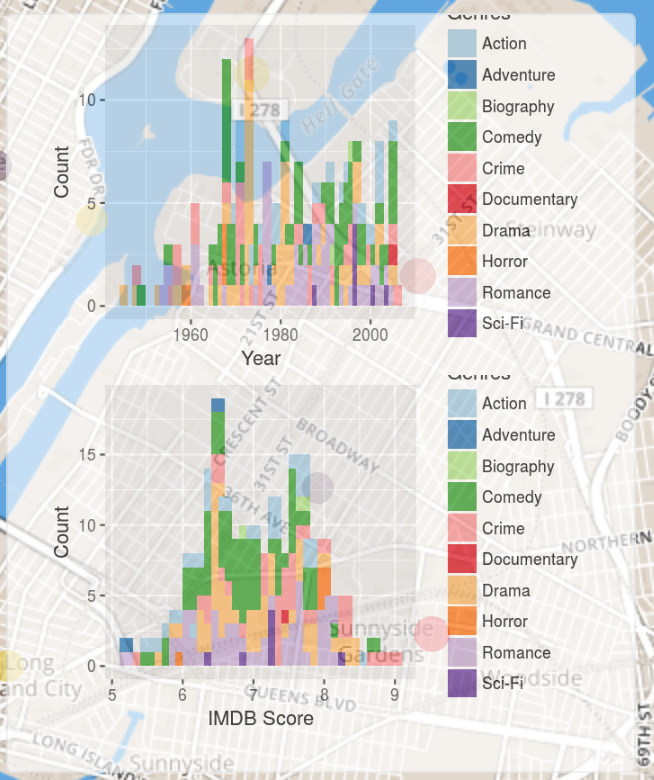 3.  Wordcloud (New York Movie Theme): You can create an image with the most frequent terms with the options Minimum Frequency(minimum value that a word has to appear so that it can be shown) and Maximum Number of Wordsdisplayed option. In that way, you will find out  what are the words the Directors use the most in the movie title when they film the movies in NYC

4. You can search the table from the find your film tab by the name of the film, directors.

Yabin recently received her Master’s degree in Information System Engineering in Computer Science track from Johns Hopkins University. Before she came to NYC Data Science Academy, she worked as a Data Programmer to develop scripts in SQL and...
View all posts by Yabin Fan >

A Movie Lover’s Guide to New York | A bunch of data May 1, 2017
[…] article was first published on R – NYC Data Science Academy Blog, and kindly contributed to […]