Over the past 3 years or so, because of one team, Golden State Warriors, and one man, Stephen Curry, 3-point shooting has become a buzz word. Headlines everywhere covering how great 3-point shooting is, media hyping the all-star Stephen Curry, and sport analysts talking about how teams should build around threes, and the league is shooting more threes than ever in the NBA history. 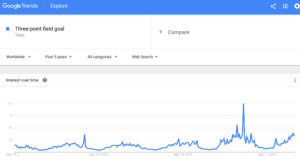 As a data scientist, we would like to discover the truth about rumors and hype. Thus, this leads to some interesting questions to answer:

In this data exploratory project, I will answer these questions using facts and insights from data, and I will validate my points using statistics and mathematics.

Important notes about the data:

The teams are divided into:

Important features for these 4 graphs are: 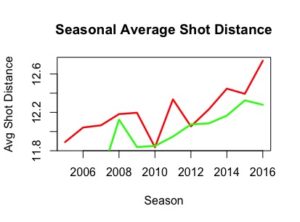 Going back to our questions:

We can answer loud and clear, teams got into playoff definitely take more 3-point shots and less short ranged shots. However, surprisingly, the whole league is adapting the 3-point shooting strategy, not just Golden State Warriors. Now we are down to one last question to validate:

Before we can validate, we need to look at one advanced metric, offensive rating:

Offensive rating is developed by a statistician, Dean Oliver. It is a rather complex equation, so we will look at a simpler version that is more understandable:

With offensive rating, we can measure how effective is 3-point shooting compared to other shot types, thus, offensive rating vs. different shot distance usage are plotted: 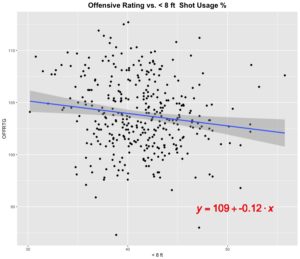 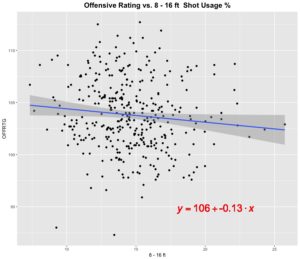 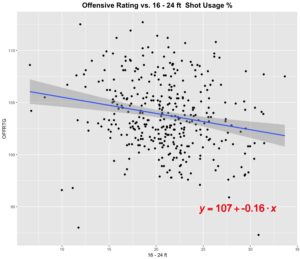 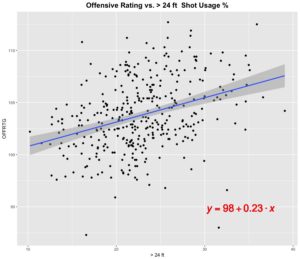 However, we may realize the slope for “Offensive Rating vs. > 24ft.” is quite small, 0.23, meaning that the “> 24ft.” variable alone may not be a good indicator of how well the teams will do offensively. At this point, we need some new indicator to tell us how well the teams we will do offensively in terms of shot distance. A useful metric would the ratio of shot types. Coaches often tune the team by mixing shooters and drivers (guards that can penetrate defense and get the ball close to the basket), therefore, the ratio between 3-point shot vs. other shooting distance usage may be a good indicator for offensive rating. We came up with 3 new variables here:

Offensive rating vs. these 3 new variables are plotted below: 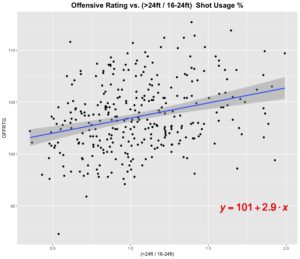 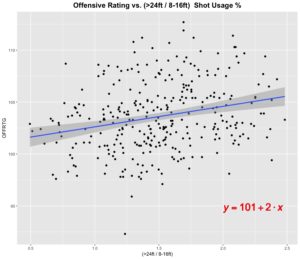 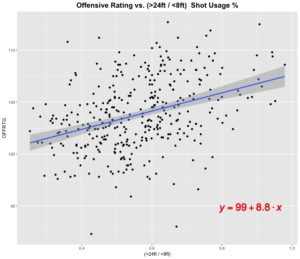 Looking at the last column (p-values) of the row with double asterisk mark, the value shows 0.00718, it is telling us:

Our answer is 3-point shot is the most effective shot, the league has over underestimate its power before. Also, it is worth to revisit the shot combination strategy to see which shot types should the team sacrifice for 3-point shots.

The 3-point shooting hype is real, as all the teams are shooting more threes than ever before. We do see playoff teams are shooting more longer range shots, and we realize the power of 3-point shots are definitely underestimated before by the league. We also found that shot combination is a very important variable to tell us how well the teams will do offensively, and the teams may want to revisit their shot combination strategy. In this project, we have barely scratched the surface of data exploratory for NBA statistics. More variables may be looked at such as rebounds, turn overs, defensive ratings, and game logs data etc., to make prediction of how well the team will do during the season.

The shiny dashboard can be accessed through here.