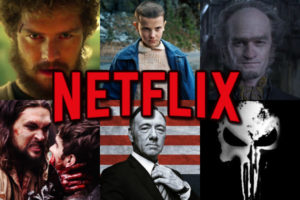 Since the streaming service is gradually replacing the traditional TV, streaming companies started to produce their own TV series over the past decent. Netflix seems to be the first and leading original content producer out there, however, Hulu and Amazon took different edges: Hulu focused more on acquiring well-known shows or up-coming star shows to expand their portfolio, and Amazon appears to emphasize on movie production.
I am curious about how does it impact those company. Ultimately, the streaming company wants to know how much money they are able to make through the TV shows. Regardless all the other revenue the companies bring in because of the original(eg: winning awards, merchandise sale), this research solely focus on the popularity of the show to measure if it is successful, therefore bringing more loyal subscribers.  So, I decided to scrape Wikipedia and IMDB to construct my own data. I focused my research on Netflix, Hulu, and Amazon. The following timeline I draw demonstrate some major events that happened in past decade. 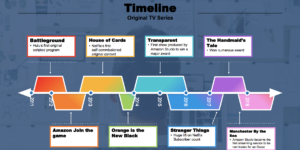 After the scaping, it's obvious that the number of original series has been increasing exponentially, however, the IMDB ratings are going down. It doesn't necessary means that the quality of the contents is going down, when we have large enough pool of sample, it's more likely to have TV shows rated in the lower level. Another theory of mine is that Netflix saw success on original content, therefore they don't mind experimenting good ideas for shows. If the show doesn't get as many views as Netflix expected, they simply cancel the show to prevent further cost. After all, it's the hit show matters. 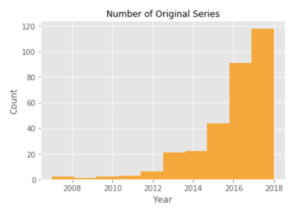 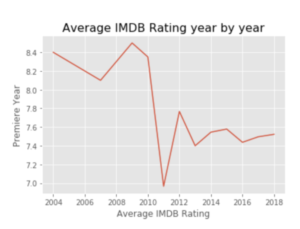 To dig in further into the data, I extrapolate the top ten genres that are rated the highest among the samples and the presence of original series among the world. 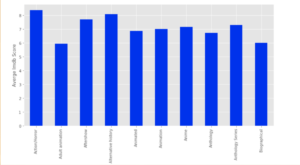 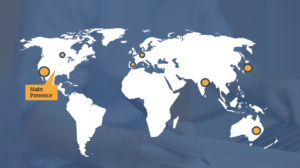 Most importantly, what value did those show create? From the graph below, we can tell that: it seems that, after every hit show released, the slope went a little steeper for subscription count. 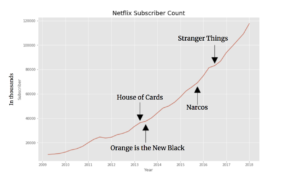