5 Things You Should Know About The Future of Population

About a decade ago, I stumbled upon a TED Talk by a Swedish global health professor named Hans Rosling.  During the video I learned more about global macro-trends (infant mortality, GDP, etc.), opening my eyes to some misconceptions and piquing my interest.  Dr. Rosling’s moving bubble plots enraptured me and his broader audience. See here:

I decided to analyze similar data for myself, to see what I could confirm or uncover about the future of population.

I used R to transform data from the UN World Population Prospects 2017 and Gapminder (Dr. Rosling’s organization) into a suitable format for my analysis.  After leveraging dplyr to summarize my data sets, I plotted the data using ggplot2 and googleVis.  Lastly, I built an R Shiny app to showcase my findings and to enable the user to interact with the plots, say by selecting the population category or by toggling by time period. 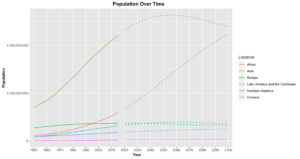 Potential implications for this growth include insufficient food and water supply, breakdowns in security, and increases in migration.

While the explicit drivers of the UN model are unspecified, two likely contributors include life expectancy and birth rate per woman.  First, life expectancy is projected to continue to rise in Africa and in fact has already risen beyond the 2007 figures from Gapminder.  Second, birth rates will continue to come down, but have lagged significantly in many African nations, contributing to the continent’s population boom.  By contrast, birth rates in much of the rest of the world have dropped to around or below replacement rate (roughly 2.1). The UN data for 2020 show Niger’s birth rate at 6.8 (highest), versus Portugal’s at 1.3 (one of the lowest).  You can see the discrepant birth rates in the coloring of the below map. 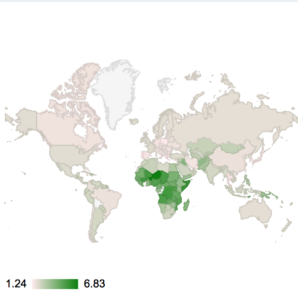 (Certainly, I would be remiss if I did not acknowledge other interrelated features like women’s education, access to contraceptives, and improved economic opportunity.  The UN’s projections must account for a multitude of features while not double-counting their shared impact, but I do not know the precise modeling techniques employed).

Finding #3. An interesting case example is Nigeria: There will be more babies born in a year in Nigeria than born in all of Europe.

Per 2020 UN projections, over half of the world’s youth live in Asia and a quarter in Africa.  By 2100 this will shift to nearly half in Africa and a third in Asia, leaving only about 10% on the remaining continents.  Significant potential implications include youth unemployment, brain drain, and insufficient capacity of education systems.

Finding #5. The world’s population will age considerably, and the aging will be more widespread across continents than anticipated.

The aging of the world’s population will become more pronounced, not only in the usual suspects of Europe and North America, but also in places like Latin America and Asia.  The below rose plot shows total population of each continent from 1990 to 2100, colored by age grouping. The increase of the dark-blue illustrates the aging of the population as a percent of the total. 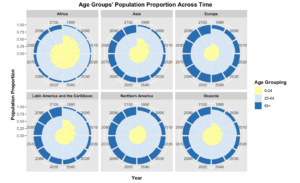 Why Should We Care?

Regardless of what sector you’re in, implications abound.  In the private sector, there will be approximately two billion new middle class consumers, mostly out of Asia.  As it is, this example speaks volumes: Alibaba’s Singles Day brings in $25 billion in revenue, compared to Amazon Prime Day’s $1 billion.  In the public sector, we will contend with how to pay out social security and pensions, how to bend the healthcare cost curve given the graying of America, and how to sustain economic growth in areas with population declines.  Finally, in the social sector, we will need to work to improve the prospects for water supply, for tertiary education access in Africa, and in job retraining in the US and Europe, amongst many other implications.

Explore the app yourself here: ShinyApp.io (free account, so may expire at some point)