3/4th of all NYC housing stock consists of rental units, and the NYC residential real estate market ranks as the second most expensive cost per square foot in the United States. Finding the right mix of housing accommodations in a new city is challenging enough, but finding a good value can seem like finding that proverbial "needle in the haystack."

RentHop utilizes a vast array of data to sort rental listings by quality to assist apartment-seekers in finding the perfect apartment. Two Sigma and RentHop, a portfolio company of Two Sigma Ventures, partnered with Kaggle to create a competition. Each team submits their model predictions and are ranked according to the outcome (aka. "logloss") of their predictions. The models are used to generate classification prediction for the "Interest" variable, with three possible values: "Low,"  ",", or "High."Medium 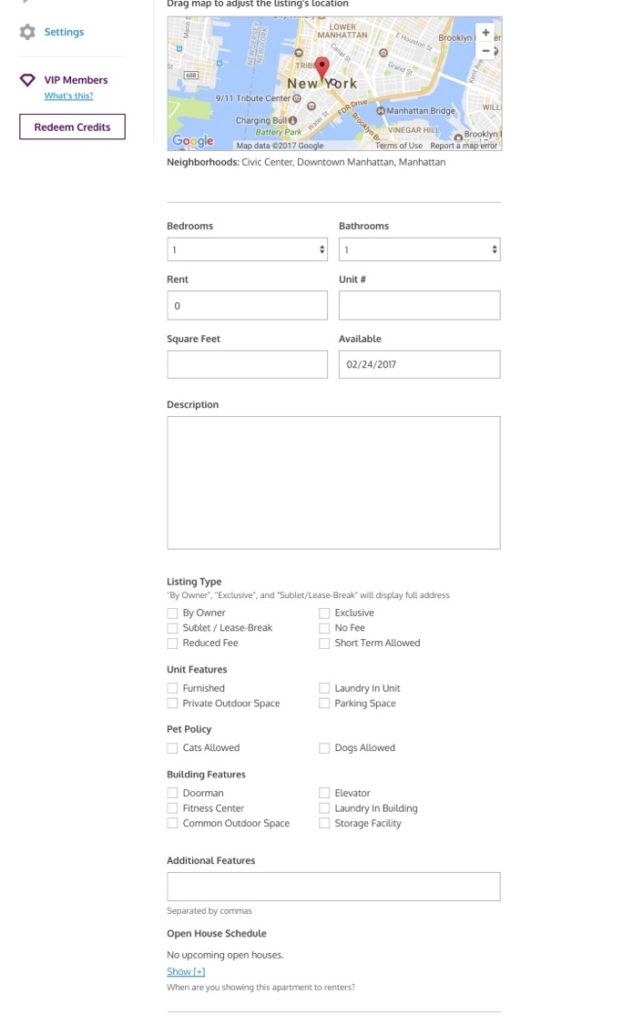 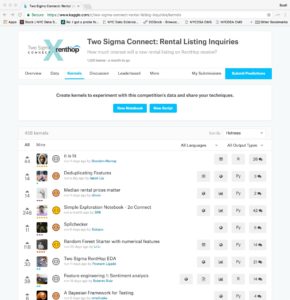 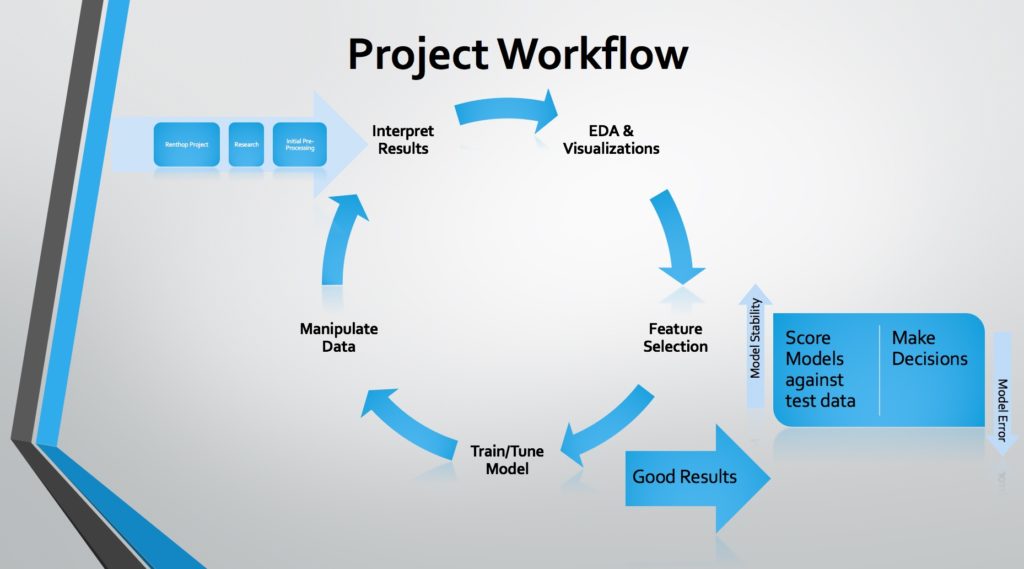 The first step in our execution was to make some base assumptions about which included features are most and least important for purposes of creating a benchmark. We assumed (incorrectly) that building ID, manager ID, and  listing ID would have  little to no positive impact on our models. For our purposes, display address, and street address were of no benefit to our model.

There are ~124,011 listings, each with 0 - 13 images, totaling ~700k images at about 83gB in size. We assumed that there would be a link between better quality images and higher interest property listings, so we collected the average brightness and average luminance, both on a 0 - 255 scale (0 - dark, 255 - bright). In addition, we used exif.py to gather metadata, and collected average image file size and number of images for each listing to great success.

We took a look at the basic numeric variables (including: Latitude, Longitude, Price, Bathroom, and Bedroom) in order to understand the apartment interest level. We decided to use these features as the foundation for our model, and a benchmark for comparison of future models.

Initially, we made the assumption that the apartment interest levels will have some correlation with the location features (latitude/longitude). The reason behind this is that we had a natural inclination to associate higher price with higher interest, and if that assumption holds it would naturally follow that the chart would have clusters of high interest areas in high income neighborhoods, say areas near  Central Park. We were undeniably wrong. The chart below clearly depicts the lack of any clear clustering amongst the high and medium interest neighborhoods and an overall abundance of low interest properties. 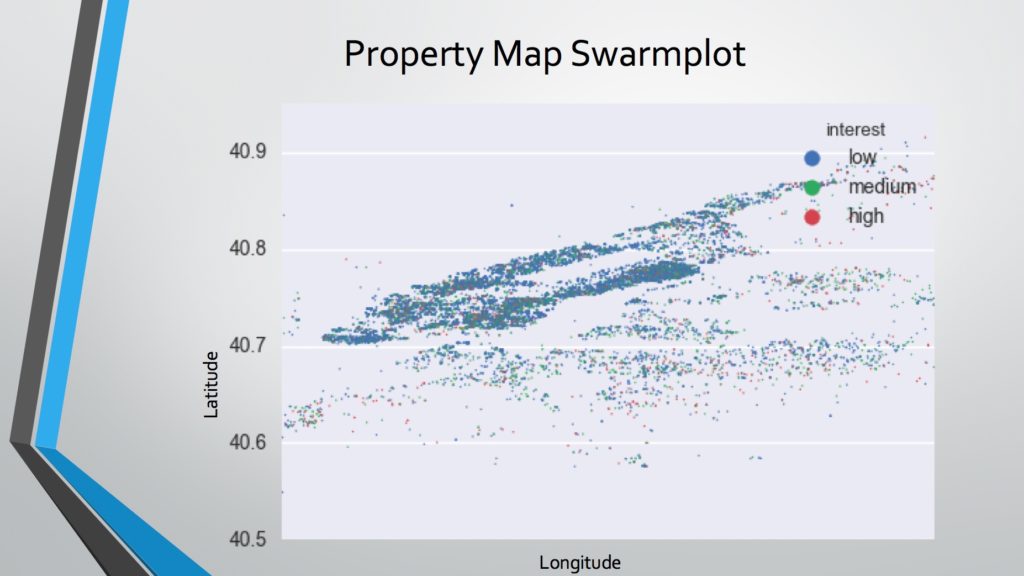 Additional derivative features include manager count, building count, word count, word diversity, and description sentiment. The next step in our process is EDA.

First, we conducted a brief analysis and visualization of the price, bathroom, bedroom, and word count variables.

This exercise was a great example of how one's biases can influence their analysis. We also made a point of deciding what interest level actually represent. Our team came to agreement that the interest level is a representative of "buying pressure" and a better proxy indication of value than price like we originally thought.

In general, when someone looks for an apartment, price is one of the most important factors to determine if this rental is a good value. We'll continue by analyzing the prices in different interest levels. 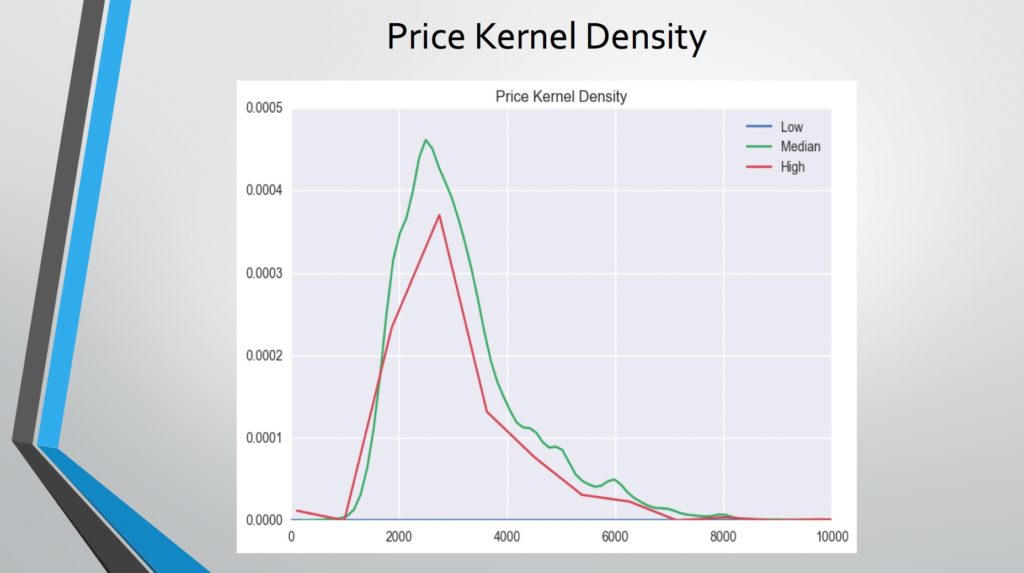 Something unusual is happening to the low interest apartments in the price kernel density chart. This is a result of having a substantial quantity of high priced low interest properties, so we decided to do a logarithmic transformation of the data to normalize the price. 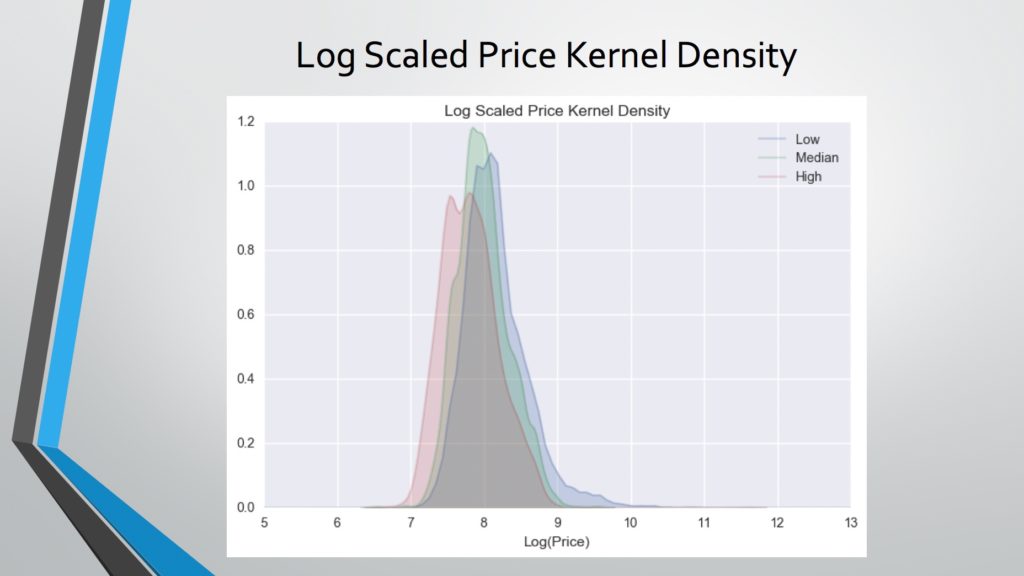 Next we looked at the bathroom data. 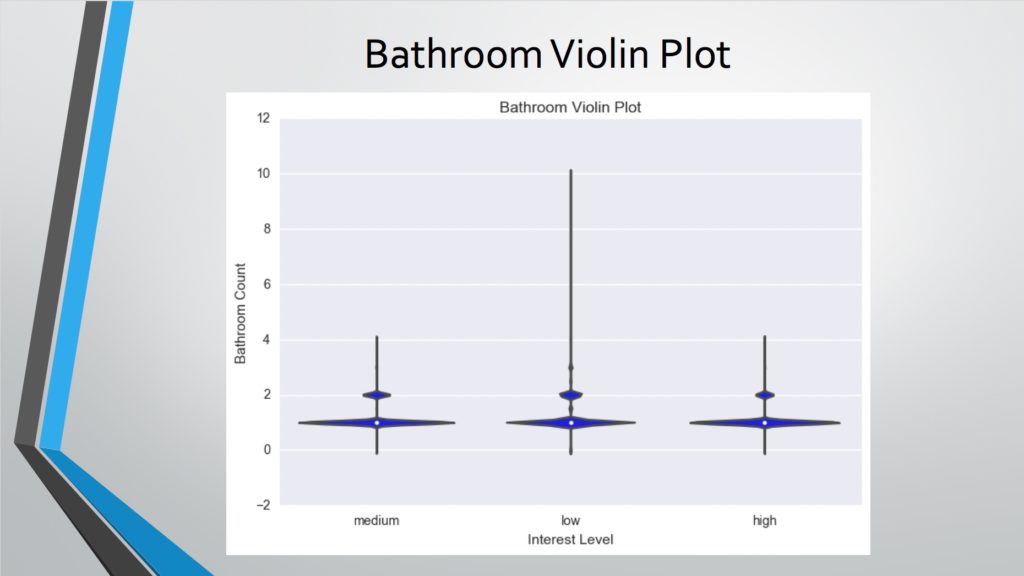 One bathroom is the most common arrangement for the rental properties of all interest levels, an expected result for the NYC housing market. However, a few super high priced listings add the high bathroom count, outliers that are visible in the graph. The medium and high interest properties are very similar, so the bathroom values may be better suited as a binary indicator for low or not low interest properties. 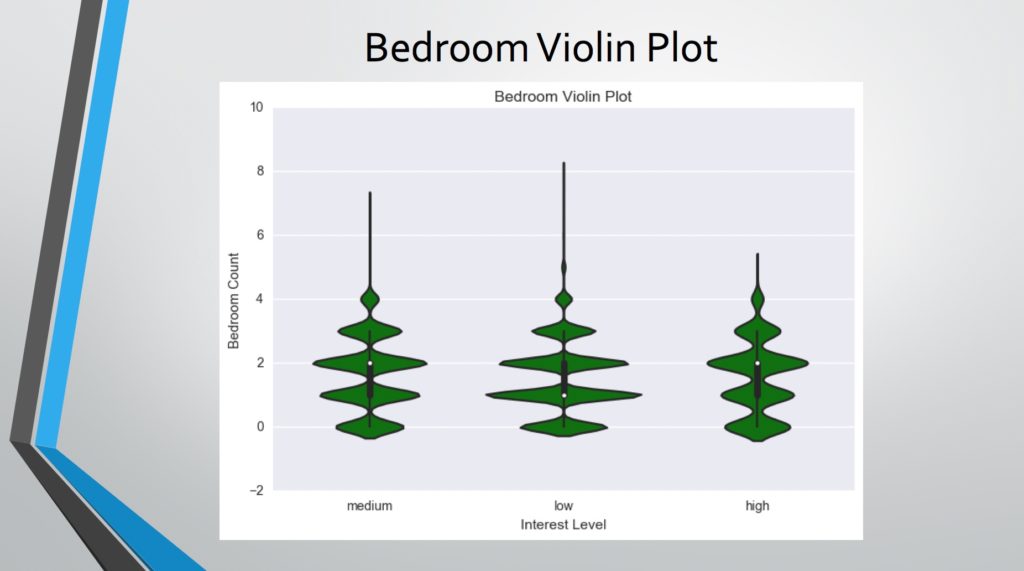 We looked into Manager_ID to determine if it could be a useful indicator to classify various interest levels. 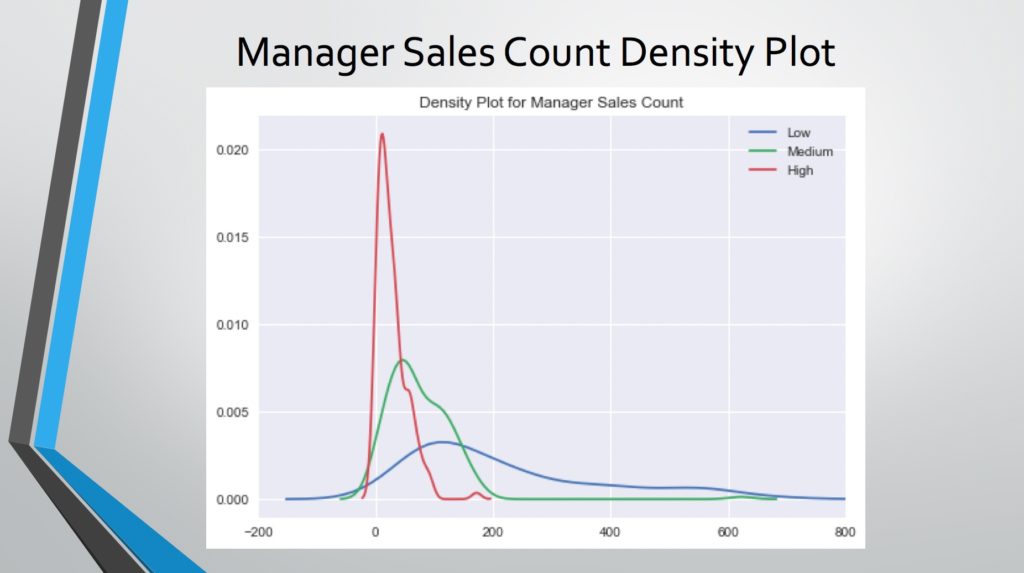 The x axis denotes the frequency count for individual managers. We notice that there is a peak for each interest level. This corresponding manager lists more apartments than others. We also notice that the high interest properties are spread among a rather small quantity of managers, and one manager in particular has orders of magnitude more listings than their competitors.

There are 18 user selectable features (Parking Space, Elevator, Doorman, Cats Allowed, Dogs Allowed, etc). Those features can be good indicators for classifying interest levels, but are often counter-intuitive, such as cats allowed and dogs allowed. 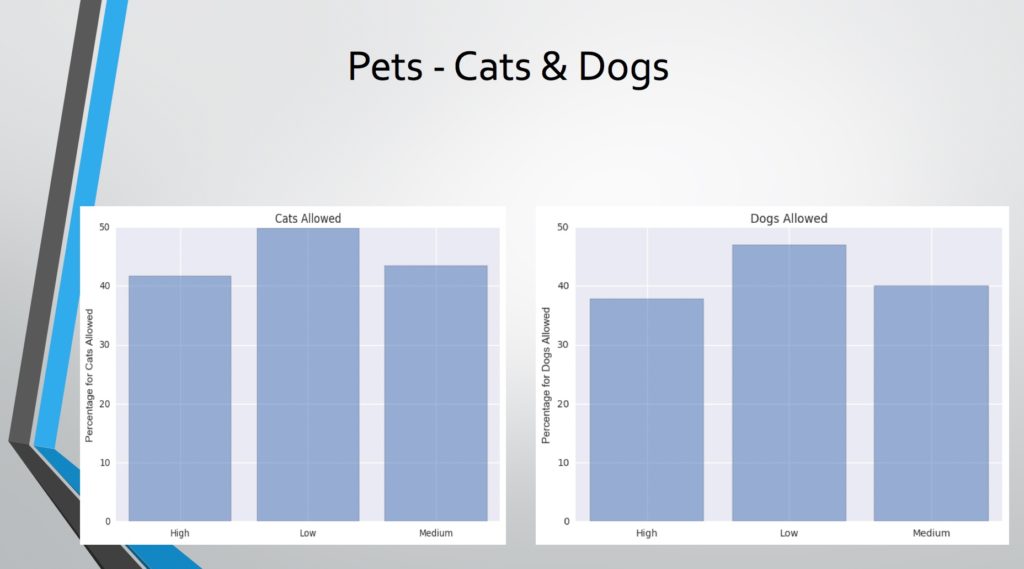 Next we analyzed the derivative features, starting with description length (word count). 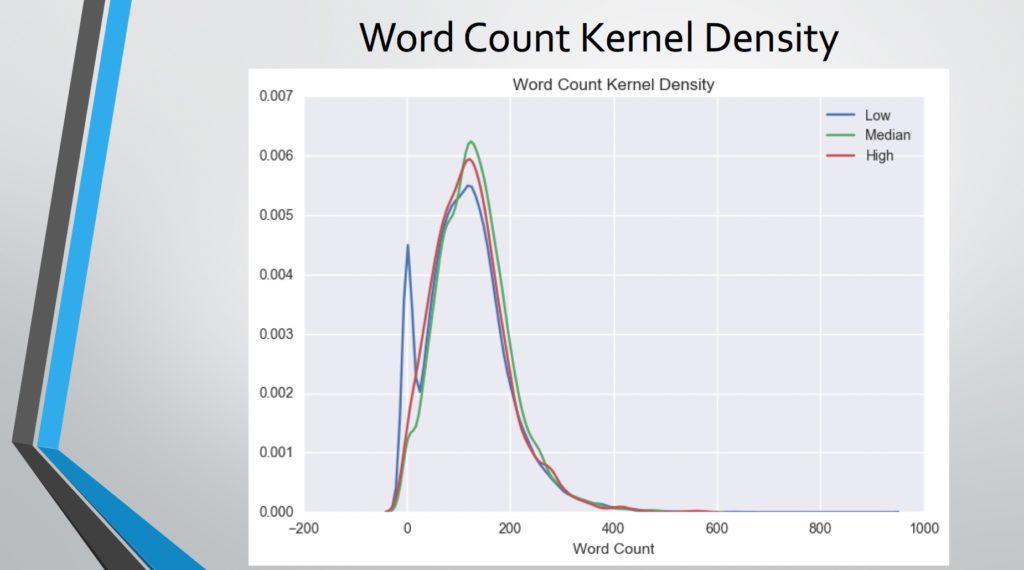 There is a bump at the beginning of the low interest curve, right around the value of x = 0. This corresponds to descriptions of length 0, or empty descriptions. Naturally, apartment listings that omit key information such as the description, are destined to be categorized as low interest. Buyers are ultimately interested in getting a good value, regardless of price, and the lack of data, makes it almost impossible to determine whether the property in question is a good value or not. 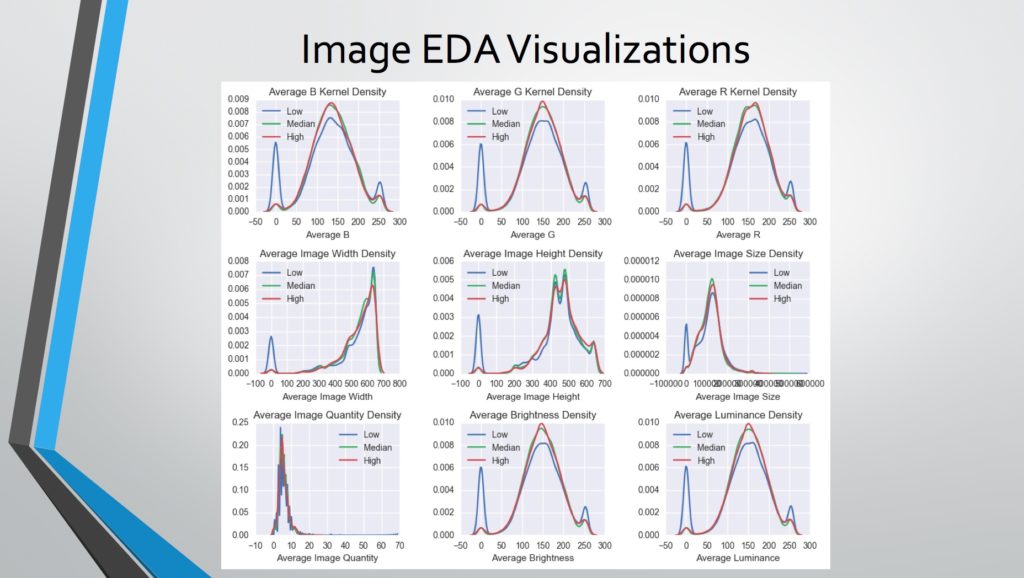 The chart depicts the derivative features generated from the image data. A common image format is RGB, where R (Red), G (Green), and B (Blue) values range from 0-255, and combine to form the color of each pixel. In this case, we were able to determine the brightness of each image by averaging the R, G, and B values, then we averaged the brightness values for each property listing. Image Width and Height refer to the average pixel count for the images for each property listing. Similar to the description length, a lack of images is a strong indicator of a low interest property.

Below is our initial feature importance plot: 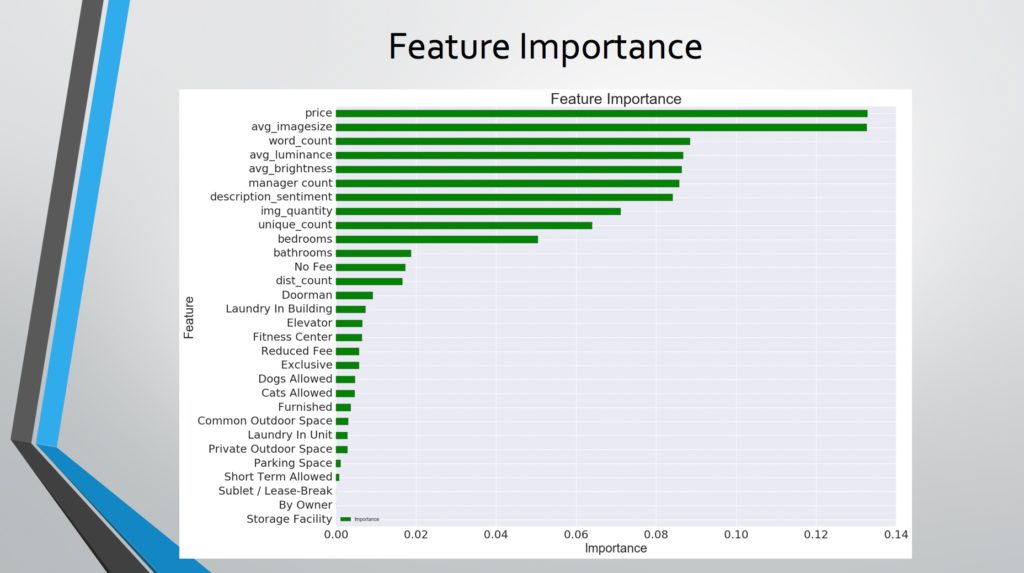 We did more research on the image features RGB, average image height and width, existence of metadata, etc. were added into the feature selection consideration. 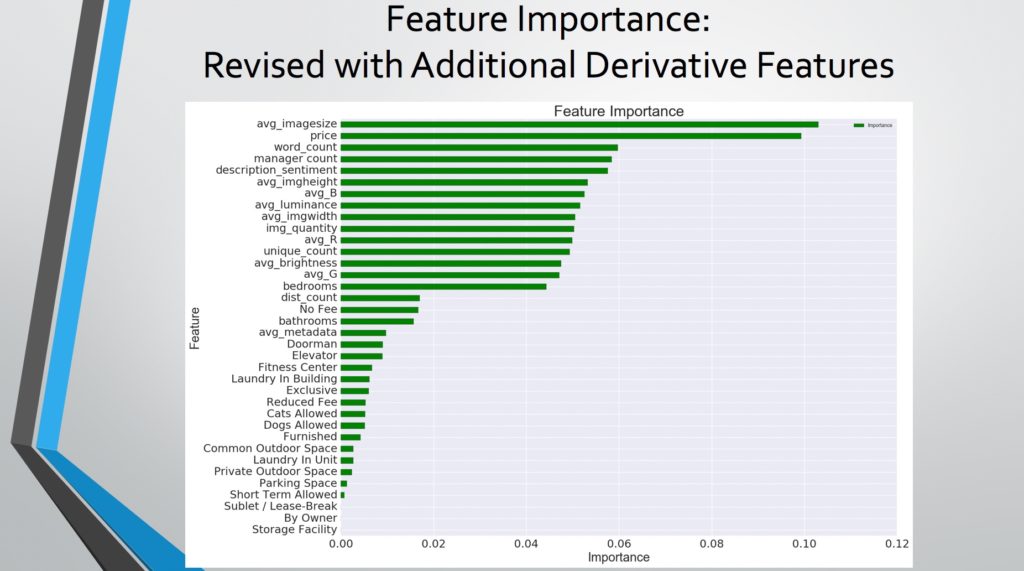 In This Kaggle Project, we have tried three types of 'high level' models: ensemble (aka stacking) models, voting classifiers, and artificial neural networks - each with separate tuning parameters. Each of these models comes with its own set of pros and cons, and ultimately provide different log-loss results on the test set.

Initially we used the stacking model due to its simplicity. Since we created the code to implement the algorithm and our primary objective was precision and consistency, it wasn't optimized for performance. This model's accuracy performed rather poorly, even when compared to the benchmark - the top 5 most important factors in a simple logistic regression.

Our experience with the stacking model left us looking for better options, and we tried a voting classifier next. Voting classifier is another way to combine the results of different models. There are both hard and soft voting options. While hard voting obeys the majority wins rule, soft voting is much more flexible for multi-class problems. It allocates the weight for each model and calculates the final result based on the basic model results and weights. Voting classifiers may be one of the fastest algorithms used to stack different models.

However, a major downside to the voting classifier, as in our case, is unstable predictions. This means that running a voting classifier model with identical parameters will yield different results each time it is executed.

The last model we used in our project is the artificial neural network - a supervised machine learning algorithm growing in popularity amongst the data science field. This particular model is quite well-structured in the python “keras,” package. By using this model and selecting the top features, we achieved the best score on the test set, a logloss of 0.585.

Unfortunately, the run time for the neural network is extremely long without the assistance of appropriate GPU hardware. When operating our model, each cross-validation fold with 5 bags needed  approximately 7 hours to complete on a 12 core Intel Xeon server. In this project, we set 10 folds, so we were limited in the amount of times we were able to run the model within the project timeframe. 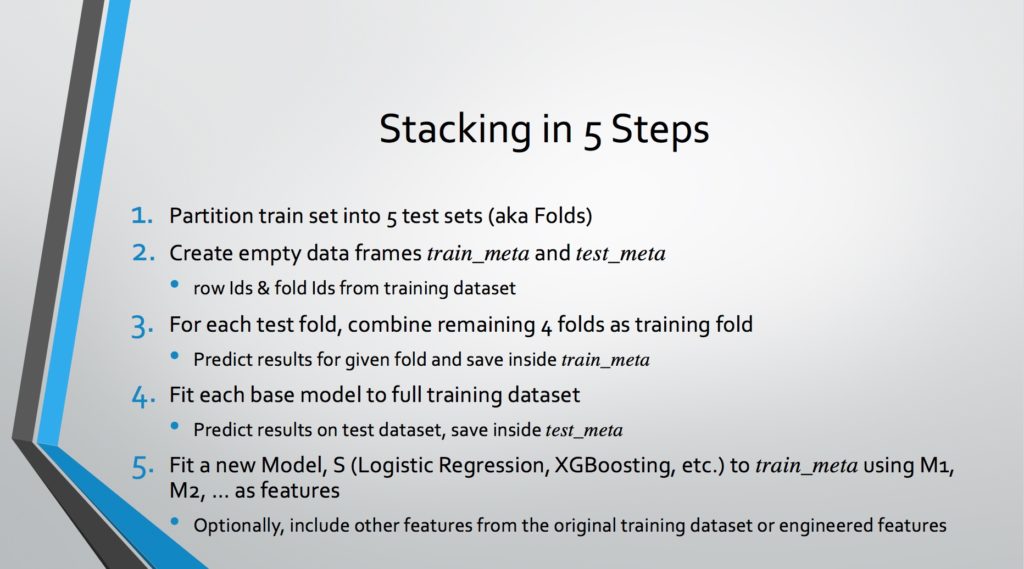 Initially we omitted seemingly useless and highly correlated features such as building ID , manager  ID , description, latitude, longitude, and created. Our intention was to decrease dimensionality and prevent overfitting problems. However, after selection and testing of various models and parameters, we found it is better to include those features, however counterintuitive it may seem. Here is a chart of our prediction scores.  Over time we did manage to improve the score dramatically and end up in the top 50% of submissions. 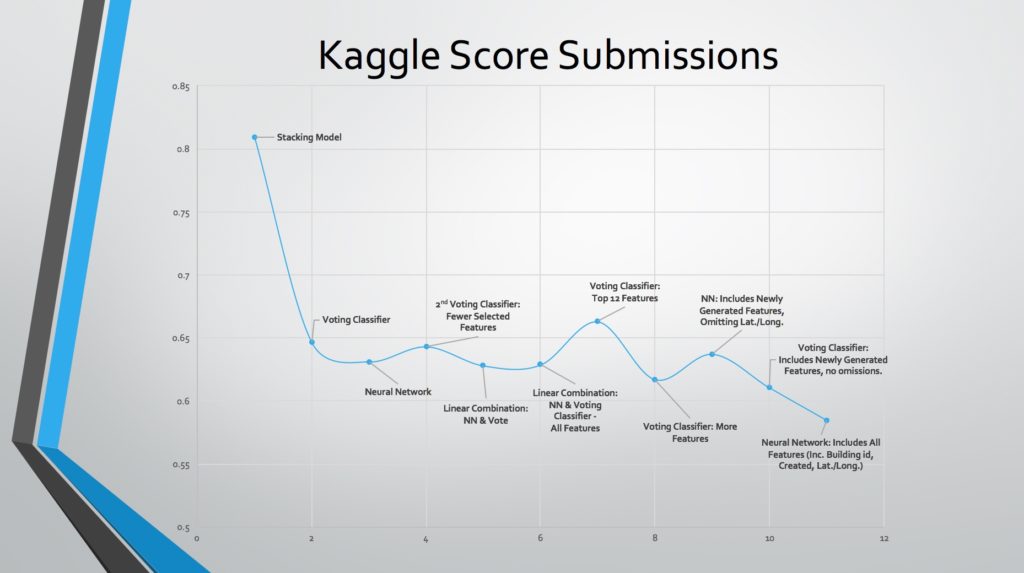 Successful group cohesion through proper use of Github, along with a preliminary discussions of individual strengths and weaknesses was key in facilitating concurrent development throughout the duration of the assignment. Concurrent work on feature engineering, model development, EDA, and parameter tuning was necessary in order to complete the project within the deadline.

When working on models that take hours to run, it was very helpful to work out of a more traditional development environment (such as sublime, emacs, or text wrangler) rather than an iPython notebook. This development path allows additional portability and facilitates execution of code on multiple computers or remote servers. We found access to a 12 core Xeon cpu server running Ubuntu linux extremely useful throughout the development of our model.

The models were developed locally on our laptops, and the code was sent to the remote server through git. Then the code was executed in a terminal 'screen' which allows for the model to continue running even after the remote connection (ssh) to the server terminates.

The conclusions we can draw from this project are many. It is extremely important to fully understand and define the value that is being modeled, as well as keep an objective view in regards to the analysis. It was quite interesting and humbling to find so many seemingly contrarian indicators throughout this analysis - such as the surprisingly unimportant Latitude/Longitude features.

Scott Edenbaum is a recent graduate from the NYC Data Science Academy. He was hired by the Academy to assist in buildout of the learning management system and seeks to pursue a career as a Data Scientist. Scott's...
View all posts by Scott Edenbaum >

Dodge Coates is a recent graduate in mathematics and computer science from Brooklyn College at City University of New York. During his senior project, an investigation into compression heuristic idea for quickly computing Levenshtein distance on large strings,...
View all posts by Dodge Coates >