How safe is driving around New York City?

Contributed by Arda Kosar. He  graduated the NYC Data Science Academy 12 week full time Data Science Bootcamp program took place between April 11th to July 1st, 2016. This post is based on his first class project - R visualization (due on the 2nd week of the program).

I moved to New York City (NYC) in October, 2015. I wanted to explore around the city however after some limit it is difficult to commute by public transportation, therefore I decided to apply for my driver's license.

Starting from March, 2016 I have been in the process of getting my driver's license. I was looking for a dataset for this project in NYC Open Data and when I saw this dataset I thought that this will be a good analysis especially thinking about the fact that I will get my license in one month and start driving and exploring around the city. This will be a beneficial analysis for me in order to get the idea of death rates caused by motor vehicle collisions around NYC.

I downloaded the dataset from NYC Open Data website.(Link for the dataset)

Before starting my analysis I had three questions in mind:

Note 1: Also at this point it is important to mention that the data for the years 2012 and 2016 is incomplete therefore trend-wise I will compare 2013-2014-2015 however from the death count point of view I still wanted to see how the boroughs included in each year.

Note 2: This analysis is just for exploratory visualization for the dataset.

Note 3: The whole code for this exploratory analysis can be find here.

I imported the dataset to R. The required libraries were as follows:

After importing the data, I grouped it relating to my exploration questions:

1.HOW DOES TOTAL DEATHS CHANGE BY BOROUGH?

For the first section I analyzed the data by year and boroughs since I was exploring the change in total number of deaths by boroughs. 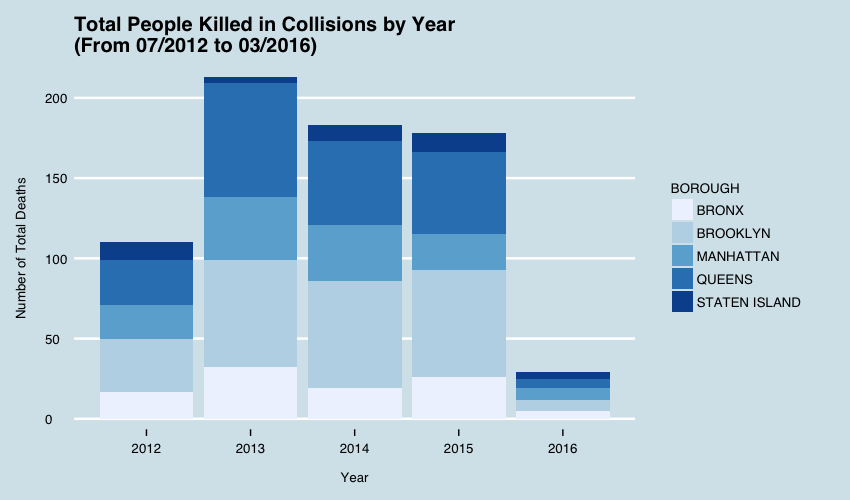 In my dataset I also have the data about total cyclist, pedestrian and motorist deaths. For exploring more I dig down and plotted the total death numbers for cyclists, motorists and pedestrians. 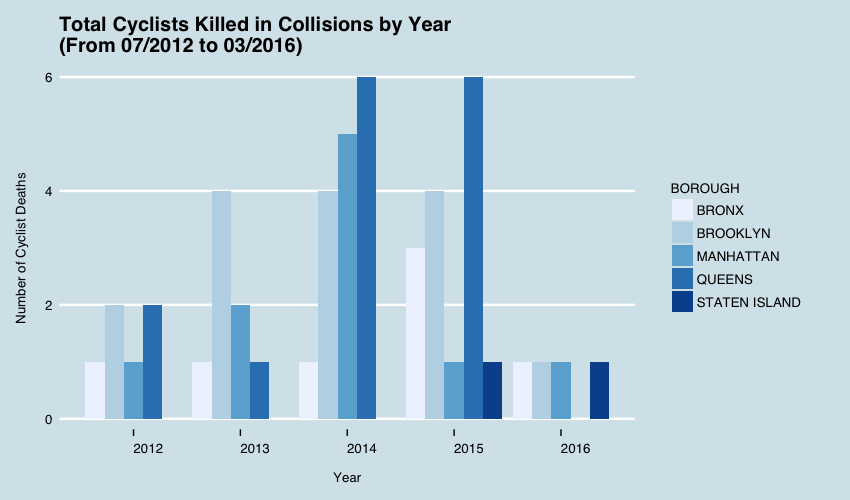 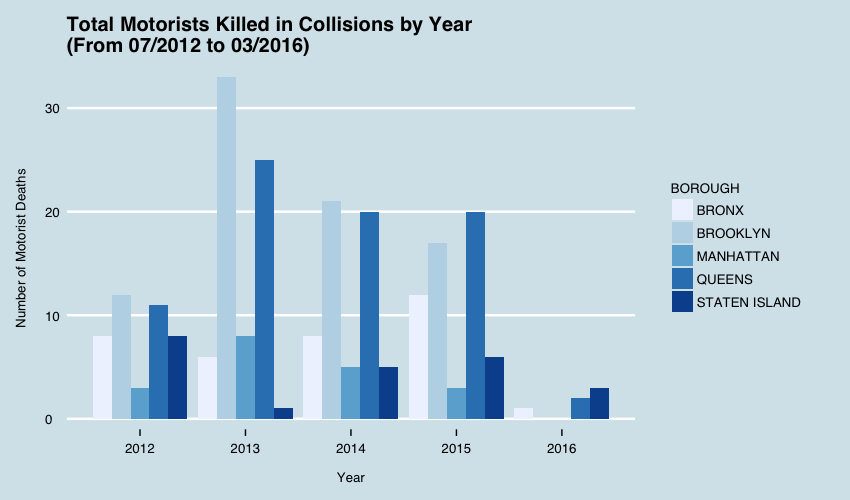 If we examine this graph, we can easily observe some trends in the motorist death rates of Boroughs. Both Staten Island and Bronx have an increasing number of motorist deaths for the past three years. In the same period Brooklyn and Manhattan have a decreasing trend and Queens also decreased between 2013-2014 however remained constant after that. 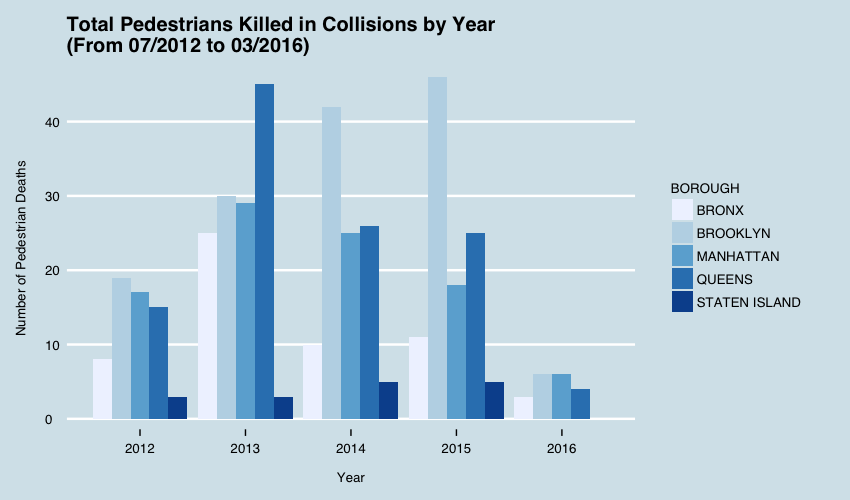 When we take a look at the Total Pedestrian Deaths by Year graph we can again interpret some trends among the Boroughs. Manhattan has a decreasing trend for the past three years. Queens and Bronx had an important drop in total pedestrian deaths in 2014.

I think the important trend in this graph is Brooklyn. As one can recall from the previous graph, Total Motorist Deaths by Year, Brooklyn seem to have a decreasing trend however total pedestrian deaths increased. Although this point can be analyzed further in future analysis, as a starting point an interpretation can be made. For the years 2013-2014-2015 the number of total people killed in Brooklyn is 67 people/year and total cyclist killed is also 4 people/year. We have a decreasing trend of motorist deaths and an increasing trend of pedestrian deaths. We can say that maybe the accidents in Brooklyn for the past three years, involve more car-pedestrian collisions instead of car-car collisions. An increase of 10 person/year, I think, is not a small number so I think this point should be analyzed further.

2- HOW DOES NUMBER OF DEATHS EFFECTED BY SPECIFIC DRIVING TIME OF THE DAY?

For my second exploration question I wanted to analyze total death numbers by some time ranges during the day. For this I used the package Chron. Because the class of my TIME column is "character".  By using "times()" function in Chron package I converted my character TIME data to actual time data. The times are in 24 hour format since Chron is handling the TIME data in that way.

After that I filtered my original table according to following four ranges: 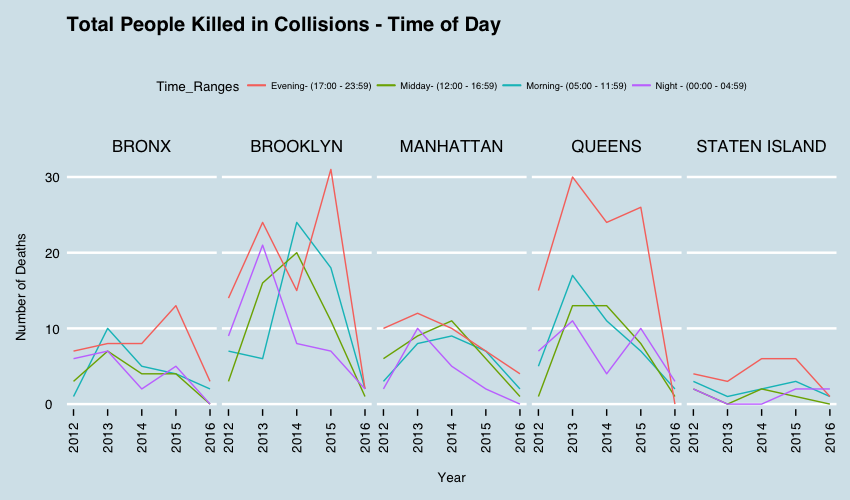 From the Time of Day graph we can observe some peak ranges for each Borough. Evening time range which is between 17:00 - 23:59 seems to be the highest in most of the years for each Borough. Further analysis can be carried out for this point and for a starting point I thought there can be two reasons for this. First one is the evening rush hour which includes a high volume of cars, pedestrians and cyclists on the roads. The second factor can be irresponsible driving. Since I have "Contributing Factors" variable in my dataset, analysis of this variable connected with other variables can lead to some valuable insights about the contributing factors to the accidents in the evening time range.

As an extension to my second exploration question, I wanted to explore if there is a trend going on in different seasons. In order to do this I grouped my data according to months and then filtered them according to the months of the seasons. 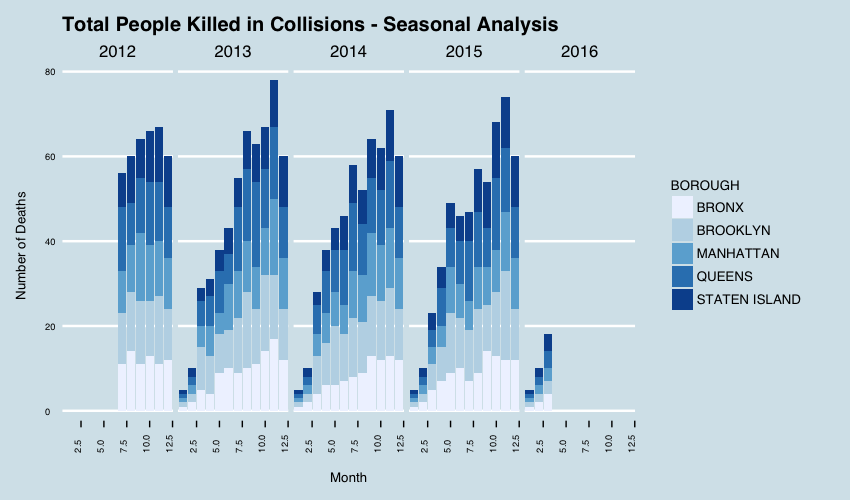 3 - HOW DOES NUMBER OF DEATHS EFFECTED BY THE DRIVING LOCATION(BY ZIPCODES)?

For my last question I wanted to see the numbers on a map since from the first part of my analysis I concluded some interesting numbers for Brooklyn and Queens. I wanted to see how the number of deaths are distributed to the boroughs.

I used choroplethrZip since I have the zipcodes of the collision locations. 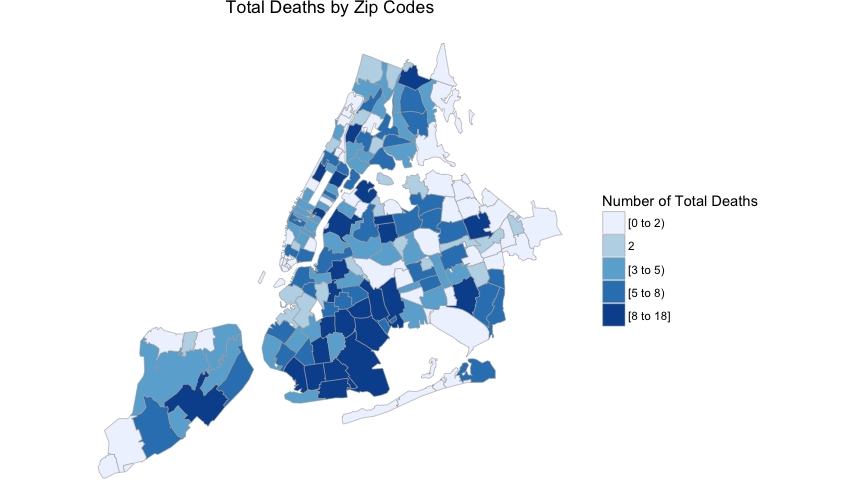 From the first part Queens also has a high death number however the north part of Queens seem to have 0 -2 total deaths which is low compared to other parts.

I was curious about the distributions of cyclist, pedestrian and motorist deaths on the map therefore I created 3 seperate maps for these 3 categories. 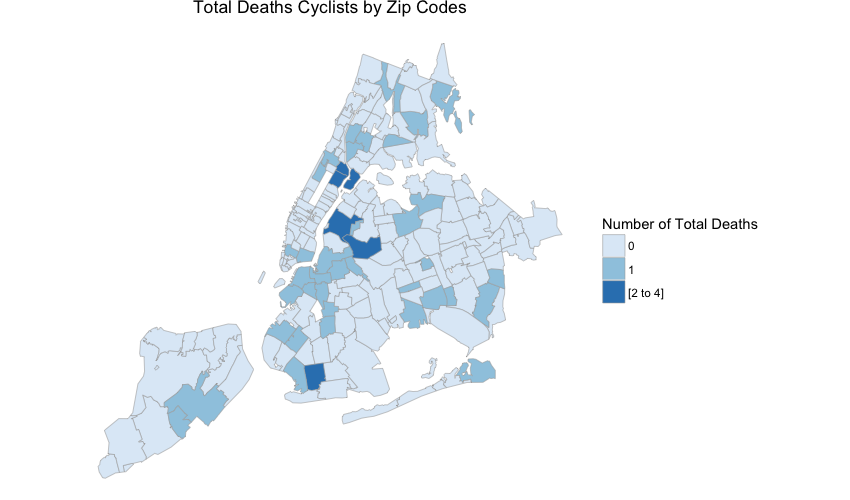 In part 1 we said that the total number of deaths for cyclists were really low. From the map we can confirm that interpretation. Light blue represents zero deaths which we see all around the city. Some parts in Brooklyn and Manhattan has the most number of deaths in cyclist category. 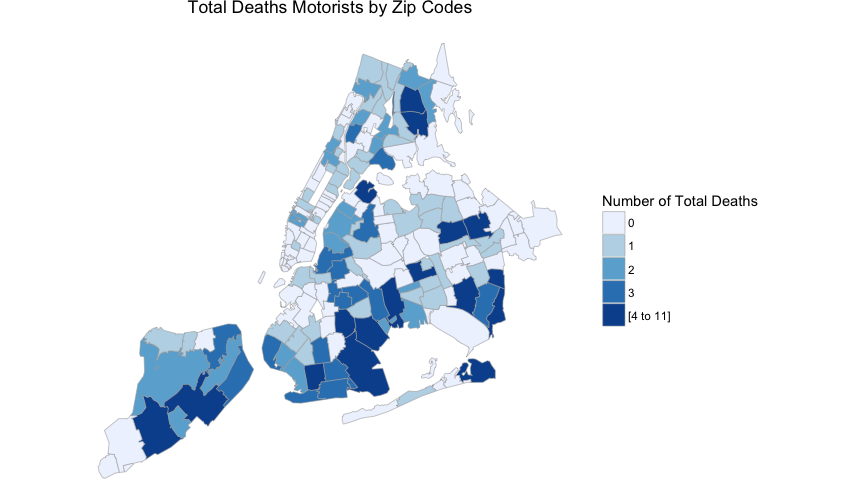 We expect to see more deaths in South-East Brooklyn and from the map we can see that this is the case. Since Brooklyn also has the highest rates for the other two categories, I think it is worth inspecting Brooklyn and Queens deeper.

As a conclusion, just from our initial exploratory analysis we can draw the following conclusions:

Regarding my initial exploratory analysis there are a couple of points that can be explored further: