Starting 2012, jurisdictions across the country including San Francisco have begun publishing health inspection scores on Yelp using a standardized scoring system called LIVES. This open data allowed restaurant consumers to make informed decisions based on where they want to eat and motivated a lot of restaurant establishments to improve their inspection score in the hopes of attracting a bigger customer base.

However, the situation for health inspectors was quite different. Health inspectors found themselves not able to keep up with the pace of inspections due to the growing number of restaurant establishments in San Francisco since 2012.

An interactive application was developed to provide a possible solution for the growing risk of food-related illnesses due to uninspected restaurants. The following questions were addressed:

The app is intended to provide the user a comparative measure of different types of violations committed at a daily, monthly, or yearly interval and reveal dense regions in San Francisco containing high risk violations.

The time series help provide a macro and micro perspective of the inspection performance of restaurants in San Francisco. In the case for San Francisco health department, they can use this particular visualization and its interactive features to either discover the general trend of violations committed or specify a month and day to find the respective violation counts.  Moreover,the health department would be able to anticipate when a problem arise. For example,  in a scenario where total high risk violations is greater than low, moderate, or no risk violations for a certain period of time, the health department can plan beforehand and act accordingly to prevent a possible food- related crisis.

Upon inspection, those postal codes correspond to some of the busiest areas in  San Francisco including Chinatown, Pier and most of downtown San Francisco where the number of restaurants is much higher relative to other postal codes.  Further statistical tests would reveal more insights on the correlation between number of restaurants and the number of high risk violations and other types of risk violations. 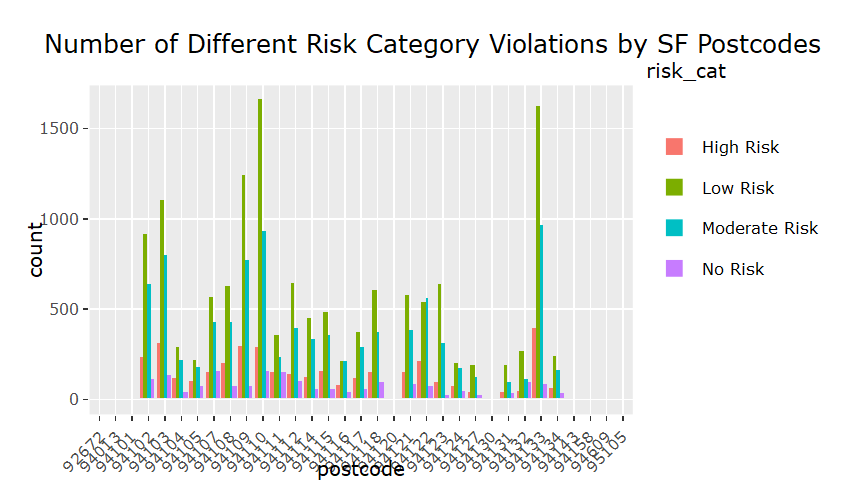 San Francisco health department should allocate a larger fraction of existing health inspectors to post codes with high density of high risk violations. This approach would ultimately decrease the growing risk of food-related incidents by placing heavier attention on restaurants that commit more high risk violations. Of course, hiring more health inspectors  would equally solve the problem and decrease the overall time spent for inspection in San Francisco. However, if the San Francisco health department is under a tight financial situation or under other circumstances which prevent the hiring of more health inspectors, this short term allocation solution will suffice.

An interesting follow up project would highlight the specific details of the approach, including the  number of health inspectors to send to respective postal codes,  the time and date to inspect restaurants that optimize time effectiveness, and the inspection order of restaurants. This could be done by building a  predictive model to determine which restaurants are more likely to commit high risk violations first.