This blog is intended for prospective job searchers to have a macro look at common job listings through indeed.com as well as examine the data on what are common pros and cons with popular companies such as Grubhub or The Washington Post.

Indeed.com is popular among many data scientist as the go to site for finding employment and company scouting.  Unsurprisingly, they are a popular site for data science practitioners to scrape.   Prospective students and  job searchers will be able to find insight on best paying career paths as well as desirable companies according to company reviews.   The blog will also look into what are features that can predict salary of a position as well as company job titles.

Finally there will be wordclouds of pros and cons from reviews written regarding popular companies as well as a sentiment analysis of polarity scores among reviews for The Washington Post.  The data was collected via scrapy spiders and code for the spider can be accessed below as well as the compiled csv's from said data.

LabCorp has the highest mean salary offers for their listings.  However, that doesn't necessarily mean they are paying the best for each position, simply that they have high paying position offers.  Open Systems Technologies, Inc has a large spread on their salary postings which indicates they likely have a wide range of position offerings.  Mitchell/Martin Inc. is interesting here as they also appear among the companies with top review scores by their employers. 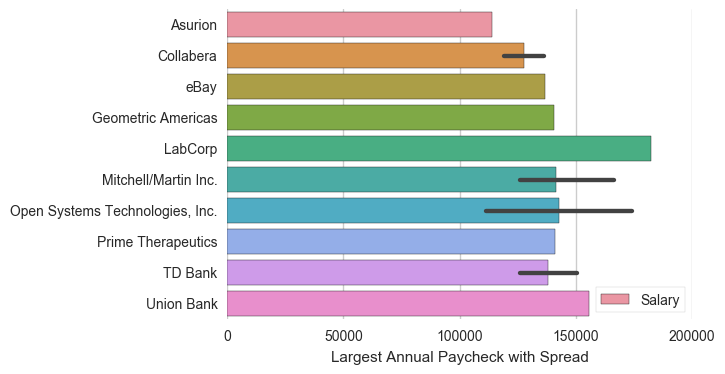 The review sum is taken from the sum of the mean score of compensation, management, work life balance, culture and job security.  There are noticeable statements from this graph.  First, there are positions where there is some variance among the positions with the highest review sum scores.  Across the board, those most satisfied with their position overall come from analysts and engineers. 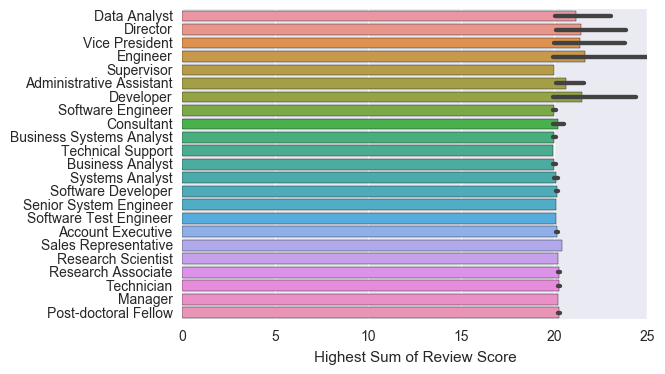 A heatmap can be used to display that review scores among work life balance, management, job security and culture all strong correlations with each other.  Compensation is the feature which displays some correlation with all five other categories. 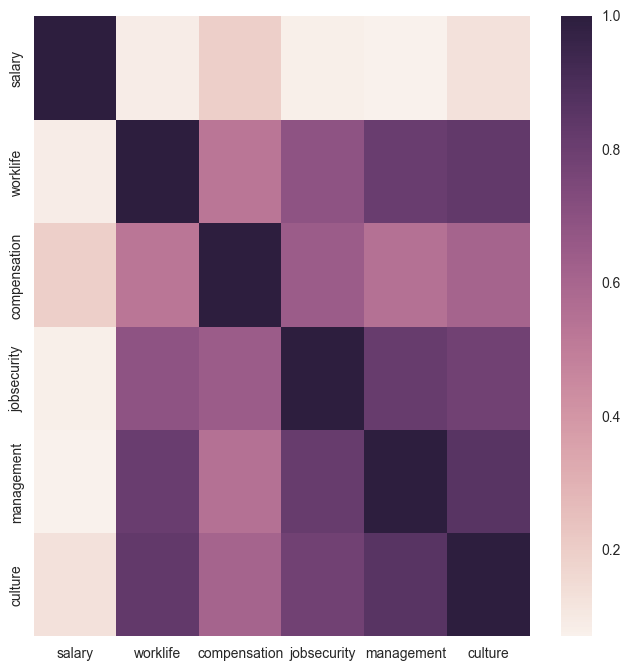 A pair plot can be created to display this visualization better especially when the data is separated by salary quantiles.  Note that the gigantic spread among salaries in the highest quantile. 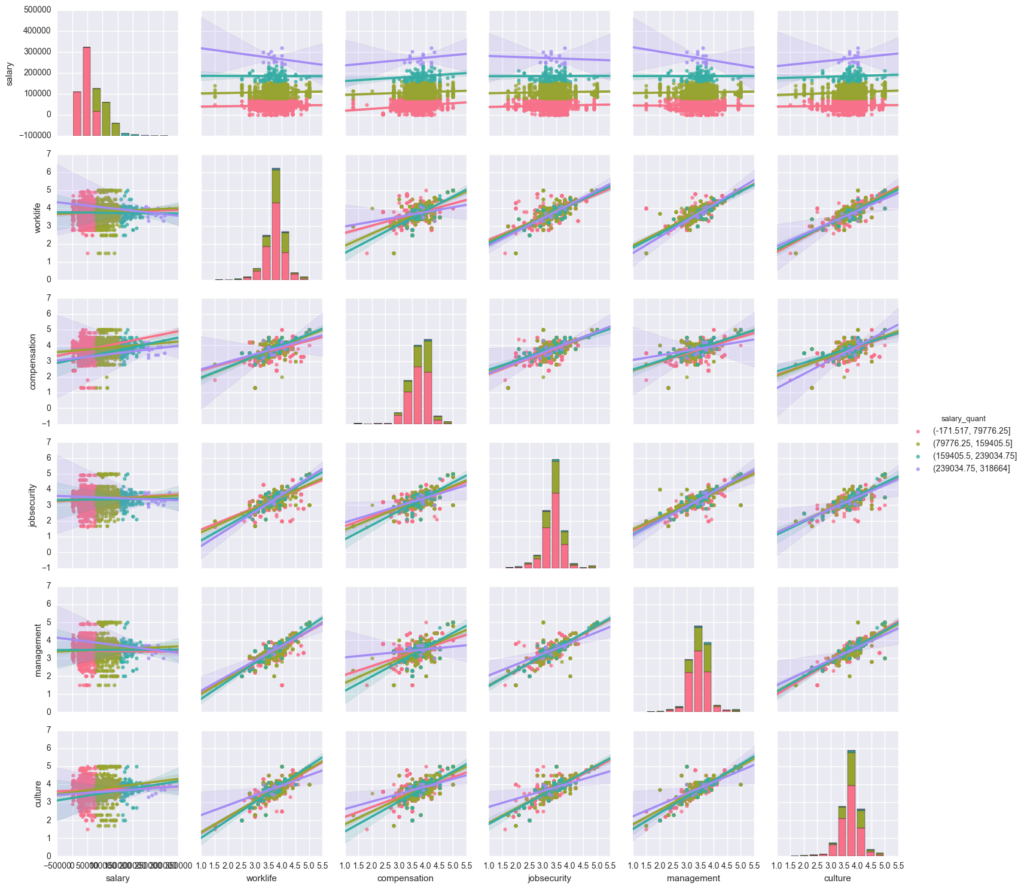 Unsurprisingly, higher ratings in compensation tend to indicate higher salary.  Also higher paying jobs tend to have lower job security.  Surprisingly those with higher salary also tend to give higher scores for company culture.  This could mean that those in better paid position tend to "buy in" their company culture and there could be some hypothesis that this could be some mercenary attitude in that loyalty can be bought. 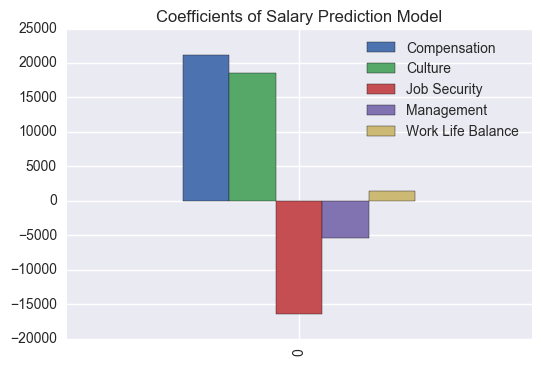 Also as expected, if feature importance were to be examined on what is most likely to be an accurate predictor of job title.  Salary is by far the strongest predictor among the data set with work life, job security and culture having almost no impact. 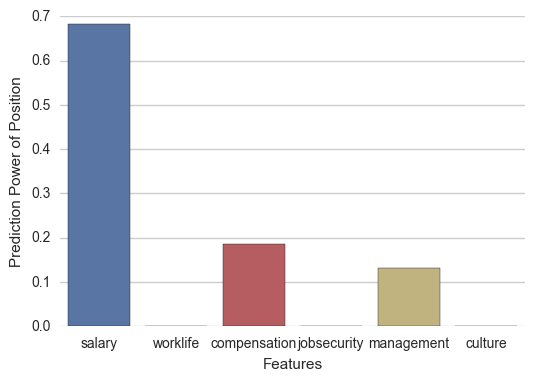 A wordcloud can be constructed to illustrate what is being said among well known companies within the data set.  Among the pros, these are commonly cited words among the following companies. 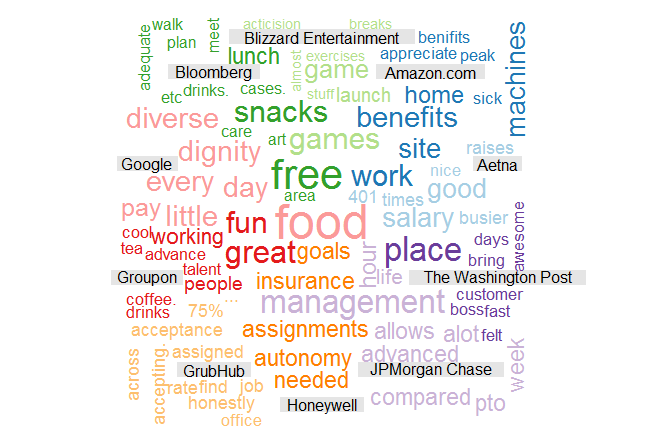 The cons tend to have stronger words.  Oddly enough, there are some strange polarities with grubhub with "acceptance" being a popular word among positive reviews and "fascist" being used in a negative one.  Humorously, it has also been verified by many employees that the coffee in Bloomberg is indeed, terrible. 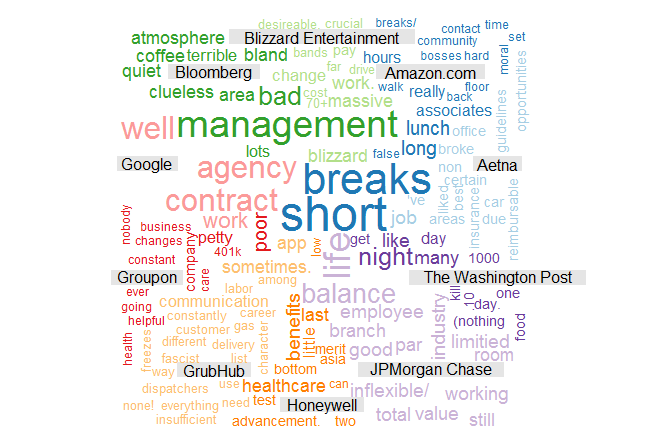 Finally, a sentiment analysis can be created for reviews of various companies such as the one below for The Washington Post. 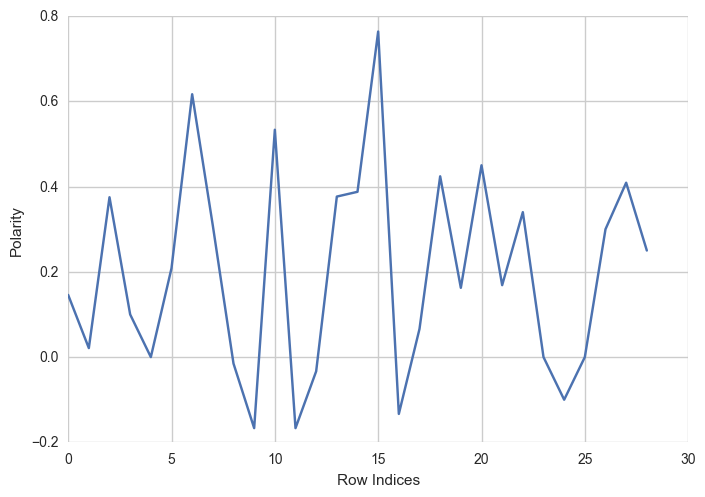 While this is overall a summary of a multi-facet picture of the data scraped from Indeed.com, there is a still significant amount left to explore.  As a result, the collection of this project along with accompanying code can be found in the github below for a user to peruse further analysis on their own.